Accessibility links
Study: A Cigarette A Month Can Get A Kid Hooked Occasional smoking among middle-schoolers can lead to tobacco addiction, according to a study in the journal Pediatrics. Of the young people in the study who said they had inhaled from a cigarette, nearly two-thirds said they smoked at least once a month. Half experienced symptoms of dependence.

Listen
Study: A Cigarette A Month Can Get A Kid Hooked 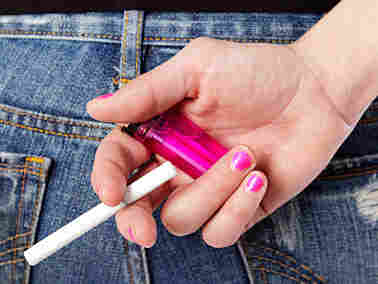 Teens who bum cigarettes every now and then find that addiction can happen before they know it. iStockphoto.com hide caption

Teenage smoking is often thought of as kind of innocent experiment, but a drag on a friend's cigarette may be the beginning of something that will be hard to shake.

A study of adolescent smokers in the journal Pediatrics tracks the course of addiction to nicotine among a group of sixth-graders. After following 1,246 middle-school children for four years, researchers say a pattern emerged of occasional smoking that led to an addiction to tobacco: A cigarette a month will do it.

"When people are just wanting a cigarette, every now and then, they think they just enjoy smoking," says study coauthor Dr. Joseph DiFranza of the University of Massachusetts Medical Center. "As time passes, then they start to notice they will crave a cigarette. So even when they are with someone who is not smoking, something will pop into their mind that will tell them it is time for a cigarette."

He adds, "When they get to the point of needing a cigarette, that means they have an urgent need to smoke and they have to smoke to get it out of their heads."

More Than Just A Taste

A third of the young people in the study had inhaled from a cigarette. Nearly two-thirds of those who'd tried cigarettes said they smoked at least once a month, and half said they experienced symptoms of dependence.

That's how 19-year-old Julia DiGeronimo's habit started at the age of 15.

"I wasn't smoking every day. It was every once and a while and then it became more, when I was 16 and 17," she says. "It was, like, OK I had friends that smoked so it was only with them I was smoking."

She didn't really think of herself as being addicted to nicotine, nor did the kids in the study. It didn't occur to DiGeronomio that she was addicted until she was 18 and realized she was able to buy her first pack of cigarettes legally. Now, she says, she smokes seven cigarettes a day and talks of quitting -- after she finishes her exams.

DiGeronimo was part of a crowd standing outside a club in Washington, D.C. A thick gray cloud swirled out of a heavy-duty ash tray stand, which got even thicker when the band playing inside the club would finish a set.

She's a pretty typical example of how addiction progresses, DiFranza says. He found that there was a sequence of symptoms among the sixth-graders that was associated with the frequency with which young people said they smoked. Two years into the study, a third of the students who had ever puffed a cigarette found that they had little control over the habit. Even if it was only once a month, they lit up.

"What happens is when you first get addicted, one cigarette a month or one cigarette a week is enough to keep your addiction satisfied," says Difranza. "But as time goes by, you have to smoke cigarettes more and more frequently. So people may be addicted for more than a year before they feel the need to smoke a cigarette every day."

The most common reported symptom was a strong desire for a cigarette -- a good indicator, according to the study, that the student is likely to become a daily smoker -- even if the student was then only smoking monthly. A few even said early they experienced withdrawal. They had trouble concentrating, were more irritable and had trouble sleeping.

Young people can bum cigarettes off friends and not consider themselves addicted. They tell themselves that if they are not buying cigarettes, they aren't hooked. In the meantime, the frequency with which they smoke increases. One day they realize they aren't going to make it without buying a pack of cigarettes.

About three or more years later, a fourth of the students who tried to stop smoking experienced withdrawal symptoms.

Before this study, DiFranza says, most research did not view wanting a cigarette every once in a while as a sign that addiction was starting. This study concludes that people ought to be educated to recognize that this is the beginning of addiction, and the best time to quit.

People who keep smoking -- even occasionally, DiFranza says -- are fooling themselves if they think they don't have an addiction to nicotine.