Accessibility links
India's 'Lost' Jews Seek A Place In Israel A group of people in India believe they are descendants of one of the 10 lost tribes of ancient Israel. About 2,000 members of Bnei Menashe have migrated from northeast India to Israel. But many more are waiting, their migration frozen by disagreement over whether or not they are really Jews. 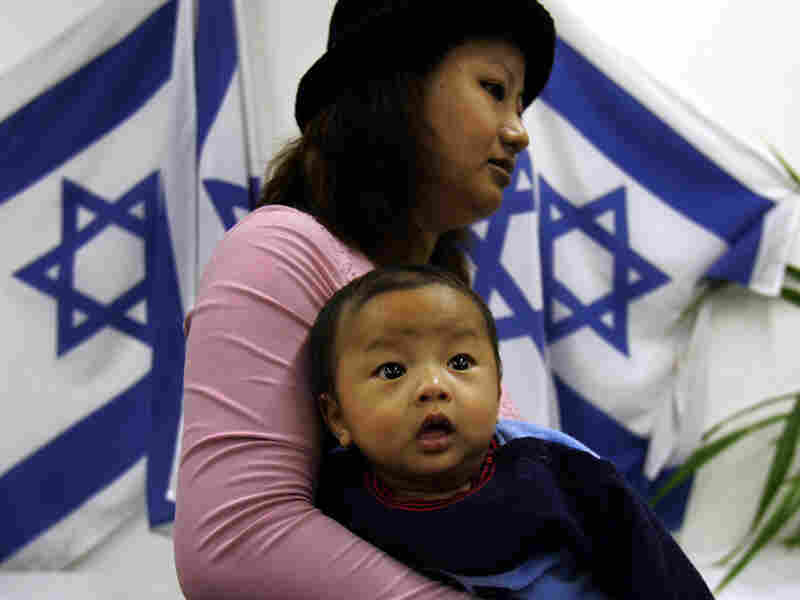 Arriving from India, a woman and her baby walk past Israeli flags at Israel's Ben Gurion International Airport in November 2006. They were joining members of the Bnei Menashe community, from India's northeastern state of Mizoram, who have migrated to Israel. Menahem Kahana/AFP/Getty Images hide caption 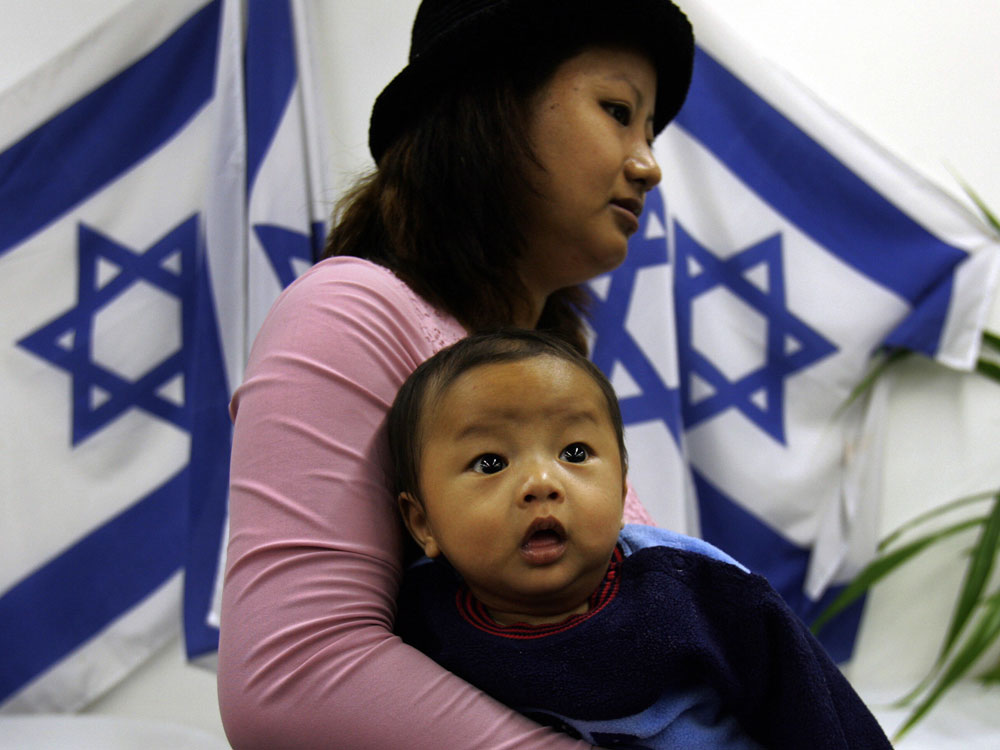 Arriving from India, a woman and her baby walk past Israeli flags at Israel's Ben Gurion International Airport in November 2006. They were joining members of the Bnei Menashe community, from India's northeastern state of Mizoram, who have migrated to Israel.

Every year, Jews from around the world migrate to Israel, a process known as aliyah, a Hebrew word meaning "ascent." But for the Bnei Menashe community of India, who believe they are descendents of one of the 10 lost tribes of ancient Israel, the road has been long and fraught with difficulty.

While almost 2,000 members of the group have been allowed to come to the Jewish state from their home near India's border with Myanmar (formerly Burma), many more are waiting, their migration frozen by disagreement over whether or not they are really Jews.

Now an Israeli, Tzvi Khaute wears a kippa, or Jewish skull cap, but still greets his family in his native Kuki, a dialect spoken in the remote northeastern corner of India, where he is from.

Khaute's family home in the West Bank settlement of Kiryat Arba is decorated with both reminders of India and the symbols of his present life -- Jewish religious books and framed sayings in Hebrew.

He remembers the feeling of awe when he arrived in 2000 at Ben Gurion International Airport, near Tel Aviv.

"It is a dream come true," he says. "Not only my dream, it is the dream of our forefathers. There was the longing and the yearning always to make aliyah, to reach the Holy Land."

The Bnei Menashe -- also known as the Kuki or Shinlung people -- are of Tibeto-Burmese origin and have come to believe they are the descendants of one of the lost tribes of Israel, sent into exile by the Assyrians in the 8th century B.C.

The story goes that when Christian missionaries encountered the tribe in the late 19th century, they found similarities between some of their own biblical stories and the Bnei Menashe's mythology.

Shavei Israel, a Jerusalem-based organization that works with "lost" Jews around the world, has been instrumental in bringing the Bnei Menashe to Israel.

"Initially I didn't believe the whole lost tribe bit," says Michael Freund, chairman of Shavei Israel. "But I was very taken by them on a personal level, on a human level, by their sincerity, by their desire to become part of the Jewish people. So I thought we should help them. So I became involved, through the bureaucracy then, in arranging for groups to start coming in an organized fashion."

He says he is now convinced that the Bnei Menashe are Jews who were sent into exile 2,700 years ago.

There might be billions of lost tribes out there by now.

Shalva Weil, an anthropologist, explaining the large numbers of people worldwide who could claim lineage to the 10 lost tribes of ancient Israel

But some say the Bnei Menashe's historical narrative is far from clear cut.

Shalva Weil, an anthropologist at Hebrew University and one of the world's leading experts on the Bnei Menashe, says its members are not a cohesive group.

"It's a very new kind of religion that is developing in northeast India which combines elements of Israelite identity," Weil says.

All the Bnei Menashe who come to Israel undergo an orthodox conversion.

Freund says he is trying to bring around 7,000 of them to Israel.

Still, Weil says there could be millions of people who could claim they are Bnei Menashe and who ultimately would want to come to Israel. Allowing the group to come in based on their link to a lost tribe could also pose a larger challenge for the Israeli government's immigration policy.

"There might be billions of lost tribes out there by now. Because 28,000 were dispersed by Sennacherib and Shalmaneser, kings of Assyria. Through natural increase, this could be half the world today," Weil says.

The project has also run into criticism, because during the initial wave of their immigration many Bnei Menashe were sent to Jewish settlements in the West Bank.

The previous Israeli government under former Prime Minister Ehud Olmert stopped the Bnei Menashe migration. Advocates say they are hopeful the current government of Benjamin Netanyahu will allow in a new wave.