Accessibility links
Child Star, '70s Icon Gary Coleman Dies At 42 The former star of the popular 1970s and '80s sitcom Diff'rent Strokes had been on life support after suffering an intracranial hemorrhage at his Utah home, his family said earlier Friday. 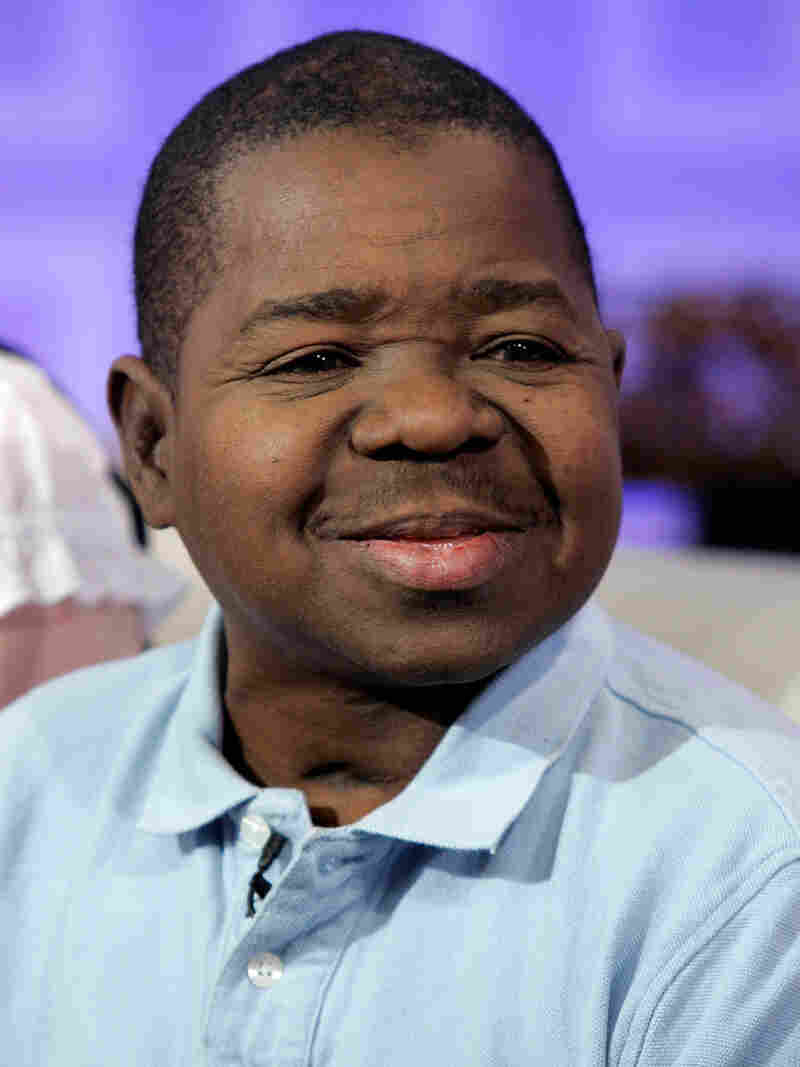 Former child TV star Gary Coleman died Friday afternoon at a Utah hospital, shortly after lapsing into a coma following a hemorrhage that caused bleeding inside his skull.

Coleman, who came to national attention as the centerpiece of the 1970s sitcom Diff'rent Strokes, suffered the hemorrhage Wednesday at his home in Santaquin, Utah, 55 miles south of Salt Lake City.

Utah Valley Regional Medical Center released a statement on behalf of Coleman's family that said Coleman was conscious and lucid until midday Thursday, when his condition worsened and he slipped into unconsciousness. Coleman was then placed on life support.

Hospital spokeswoman Janet Frank said Coleman was hospitalized because of "an accident" at the home, but she said she had no details on what the accident was.

Coleman's family, in a statement read by his brother-in-law, Shawn Price, said "information surrounding his passing will be released shortly."

"We are very grateful for all the wonderful support everyone has been extending to Gary's family," Price said, reading from a statement he attributed to his sister, Shannon Price. "Thousands of e-mails have poured into the hospital. This has been so comforting to the family to know how beloved he still is."

Coleman endured continuing ill health from a kidney disease he suffered as a child. He had at least two kidney transplants and ongoing dialysis.

On Wednesday, an ambulance was called to Coleman's home. He was initially transported to Mountain View Hospital in Payson, the nearest medical facility, said Dennis Howard, Santaquin's director of public safety.

The family statement said Coleman was later moved to the regional medical center in Provo for additional tests and treatment.

The hospital did not give details on Coleman's condition beyond calling it an intracranial hemorrhage, which is bleeding inside the head.

Coleman had continued to work in TV, commercials and film, but was most closely associated with his long run as the character Arnold Jackson on Diff'rent Strokes, which aired from 1978 to 1986. Arnold and his older brother, Willis -- played by Todd Bridges -- were inner-city black children adopted by a rich white man who was also the single father of a teenage daughter.

Improbable as the premise might have seemed, the show managed to win an audience, largely on the strength of Coleman's on-screen magnetism.

"He was the reason we were such a big hit," co-star Charlotte Rae, who played the family's housekeeper on the show, said in an e-mail. "He was the centerpiece and we all surrounded him. He was absolutely enchanting, adorable, funny and filled with joy which he spread around to millions of people all over the world."

Sadly, Coleman, Bridges and co-star Dana Plato all suffered significant off-screen problems. Bridges struggled with a cocaine addiction and ran afoul of the law, though he has rebounded to continue in TV roles. Plato died of a 1999 prescription drug overdose that was ruled a suicide.

Beyond his health issues, Coleman had a string of financial and legal problems, which his family acknowledged in its statement, citing "difficulties ... with his personal and public life."

"At times it may not have been apparent, but he always had fond memories of being an entertainer and appreciates his fans for all their support over the years," the family said.

Coleman -- who also ran for governor of California as one of 135 candidates in the state's bizarre recall election -- had moved to Utah in 2005 to star in the movie Church Ball. It was a comedy based on basketball leagues formed by members of The Church of Jesus Christ of Latter-day Saints. He met his wife, Shannon Price, on the movie set and married her in 2007.

In February, Coleman also suffered a seizure on the set of The Insider.

Includes reporting from NPR's Howard Berkes and The Associated Press.