Accessibility links
John Lithgow, Talking Shakespeare And His Father Twice nominated for an Oscar, the actor is notable for the breadth of his range: He's played a serial killer, a transgendered woman and an alien, and audiences have eaten it up every time. He joined Scott Simon for a conversation about getting started as the son of a producer -- and making it on his own. 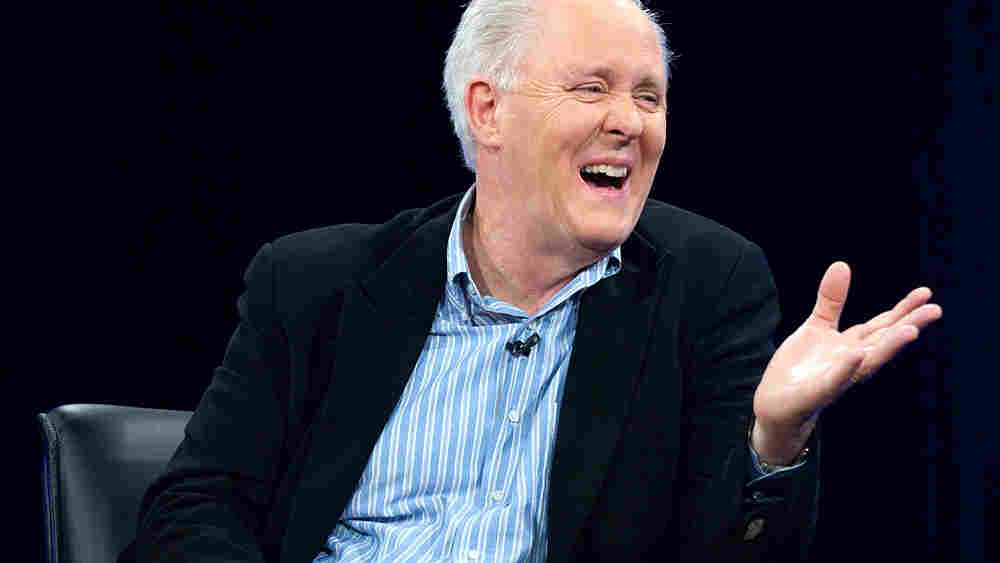 Character-Building Experience: "It's a kind of alchemical process," says actor John Lithgow about the process of creating a role. "Some of it is you, and some of it is pure calculation." WVIZ/PBS ideastream hide caption

You hear certain words when great actors talk about other great actors: presence, imagination, fearlessness. And range -- an actor's ability to convincingly portray characters who span a great range. A creepy serial killer in one show, a loopy, lovable alien in another, or a bighearted transsexual.

Those are just some of the characters played by John Lithgow -- in the TV drama Dexter, the sitcom Third Rock from the Sun, and the big-screen classic The World According to Garp -- who's also a Harvard man, a creator of children's books and songs, and a talented painter.

NPR's Scott Simon sat down for a chat with John Lithgow before a live audience in Cleveland earlier this week, at a taping of the PBS TV show Backstage With ... .

They talked about his early days in theater -- where he started out working with his father, Arthur Lithgow, a pioneer in the resident-theater movement and founding artistic director of the Great Lakes Shakespeare Festival.

When he was a teenager, John Lithgow saw Bert Lahr (the Cowardly Lion in The Wizard of Oz) play one of Shakespeare's classic comedy roles: Nick Bottom, in A Midsummer Night's Dream. The memory is still vivid.

'It Absolutely Stopped The Show'

"My father produced every single one of Shakespeare's plays between 1950 and 1960, and I was there too," Lithgow recalls. "I was even in some of them."

He played Mustardseed -- one of the the fairies in A Midsummer Night's Dream -- among other parts.

"In fact I played Mustardseed in two different productions of Midsummer Night's Dream, Lithgow says. "I was the prince in the tower in Richard III; I was the son who was killed by his father in Henry VI Part 3; I was a spear carrier and a soldier. I was a dead soldier once. I was a French soldier once. And I finally spoke a line when I was about 16: 'Ambassadors from Harry, King of England, do crave admittance to your majesty.' "

He didn't quite bring down the house, though.

"I don't think people could quite hear me," Lithgow confesses. "I didn't have a very strong voice yet."

'He Was Too Nice'

Lithgow's father was "an easy man to work with," the actor says -- too easy, in fact.

"Working for him, I discovered that he wasn't quite the great theater manager I thought he was," Lithgow says. "He was too nice; he didn't have a strong streak of the sonofabitch -- which you just have to have, if you're going to run a company of actors."

Arthur Lithgow was "a very sweet man," his son says, and "always wanted to surround himself with sweet people, whether they were talented or not. And at a certain point I lost patience with that."

Think of Joe Papp, Lithgow says, to audible chuckles from the Cleveland audience. The founder of the Public Theater and the New York Shakespeare Festival was "the face of American Shakespeare" -- but "Joe was an impossible man. He was mercurial and temperamental, and he could be a monster. But he was a great theater manager. He just made things happen. He wasn't even that good a director -- but who cared? He hired good directors."

"My father was not like that at all," Lithgow says. "And God bless him for it."

'Doomed' To Be An Actor

It wasn't on his father's stage, as it happens, that John Lithgow earned his first applause. It was at a less distinguished venue. In the woods, in fact: Camp Birch, not far from Yellow Springs, Ohio.

"I was the damsel in distress in a sort of old-time melodrama that we whipped together in about three hours for the final night of Boy Scout camp, when I was I think about 12 years old," Lithgow says. It was the standard plot: hero, villain, damsel tied to the railroad tracks, last-minute rescue.

"It was my first cross-dressing role," Lithgow notes wryly. "For this one, I was not nominated for an Oscar."

But he did catch the acting bug. There was a mishap -- the hero ("an Eagle Scout named Larry Fogg") hoisted the ingenue up in his arms at the climactic rescue, and "he fell on his ass, because I was heavier than he expected."

"And all those boys, that whole hillside full of Boy Scouts, they screamed and yelled and laughed," Lithgow remembers. "It was like manna from heaven falling on me. I've always said that if you hear enough laughter and applause at a young enough age, you're doomed -- you're going to be an actor."

From Shakespeare To Soaps -- Almost

Working for his father gave him "a great head start in the profession," Lithgow says, but after a year it was time to move on -- to prove that he could do it on his own.

"And I went without working for two years," he says. "It was murder."

It wasn't that he didn't try.

"I auditioned for soap operas and commercials; I remember auditioning for Lays potato chips," Lithgow says. "It was a sort of Mutiny on the Bounty sketch, where Captain Bligh was torturing the crew by saying, 'You can only have one Lays potato chip,' and they all rise up." Lithgow was auditioning for the Mr. Christian role -- the leader of the mutiny -- but he didn't get the part.

"I think they must have sensed my contempt," he jokes. "I didn't get the role -- nor did they ever make the commercial."

'I Insist On My Innocence'

Like many actors, Lithgow looks inside himself, at least in part, to find aspects of the characters he plays.

"It's very elusive; it's a mystery," he says. "It's a kind of alchemical process; some of it is you, and some of it is pure calculation."

More calculation for some characters, of course -- like Dexter's Trinity Killer.

"I hope he's nothing like me," Lithgow says. "I am not a serial killer. I insist on my innocence.

On the other hand: "The whole thing about the Trinity Killer was that he had a mask," Lithgow says. "He was a very nice guy ... a good family man, a deacon of his church. He was a fine person, to all appearances. What was terrifying about him was that you got to see this horrifying other side.

"Well, I'm a nice man," Lithgow says. "And I act horrific parts. People have expectations from you -- and the whole fun of acting is taking expectations and completely upending them. That's how you get laughs in comedy, and that's how you scare the daylights out of people in a horror film."

'The Most Important Month'

"I hear his voice, and I see his body in myself," the actor says. "I am so like him. It's genetic, of course -- and the old folks who knew him, when they see me perform, they say, 'Oh, my God, when you put your glasses on, you look just like Arthur.' You know?"

Late in his father's life, after a serious surgical procedure, Arthur Lithgow had "just given up on life," his son says.

"He needed to be taken care of, but he also needed to be persuaded: 'Life is worth living; keep fighting.' I lived with my mom and dad for a month, and there is no question in my mind that was the most important month of my life. Because I fell in love with my parents again."

When he left them at the end of that month, Lithgow says, "it was like leaving your children at summer camp. ... They hated to see me go. I mean, what a beautiful memory: It was wonderful to be able to knit that together at the last moment."