Accessibility links
Tradition Thrives At Baghdad Equestrian Club In the face of hardships that brought so much of Iraqi life to a crashing halt, members of the club have displayed an astonishing tenacity in clinging to the remains of their secular pleasures. Each Tuesday and Saturday, Iraqis converge on the club's racetrack to enjoy a day at the races -- and perhaps win a few dinars. 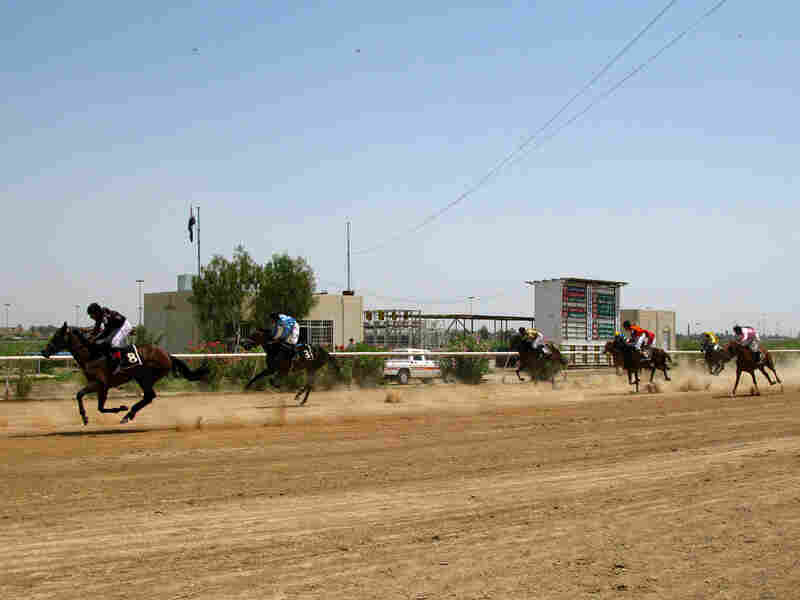 Horses near the finish at the Baghdad Equestrian Club in the West Baghdad neighborhood of Amariya. Gambling is forbidden by the Koran, but patrons say they enjoy placing small bets, and some of the money goes toward the club's upkeep. Peter Kenyon/NPR hide caption 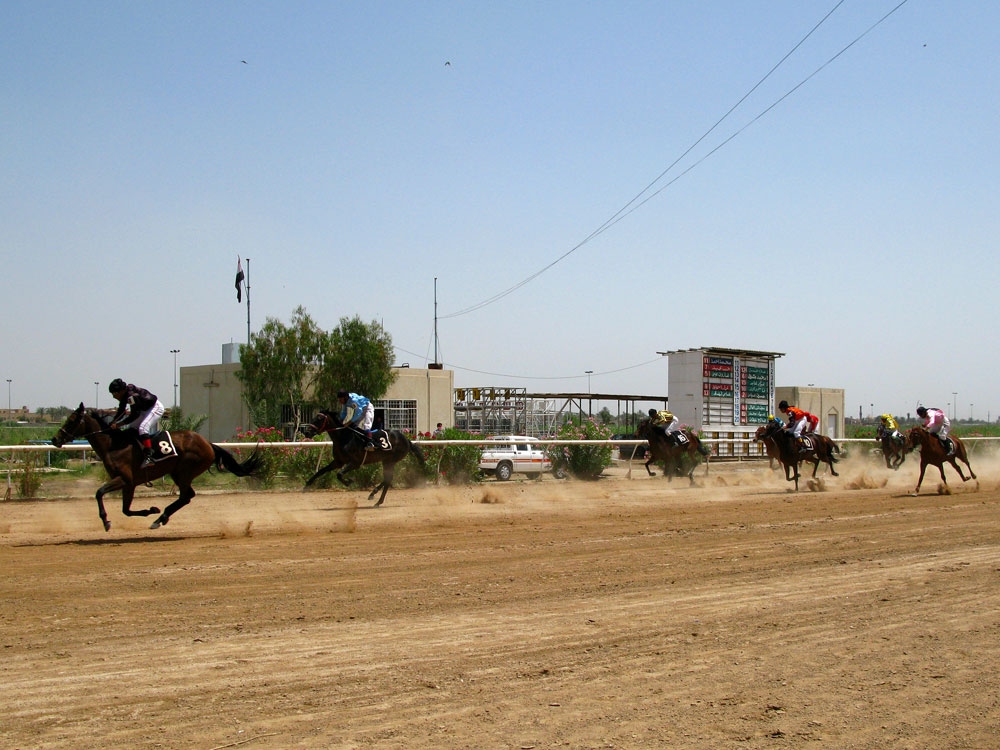 Horses near the finish at the Baghdad Equestrian Club in the West Baghdad neighborhood of Amariya. Gambling is forbidden by the Koran, but patrons say they enjoy placing small bets, and some of the money goes toward the club's upkeep.

An equestrian ritual of anticipation unfolds just as it has for more than eight decades in West Baghdad's Amariya neighborhood: Jockeys in brilliantly colored racing silks coax their nervous mounts into the starting gate. The stadium crowd streams out toward the rail to get a view of the finish. The last balky horse slides into place. A flag is raised, and they're off.

As the horses disappear around the far turn, patrons strain to hear the call of the race over the aging loudspeakers. Soon a tiny cloud of dust appears as the leaders make the final turn and come pounding down the home stretch.

In a flash, it's over, and the crowd slowly makes its way back to the shade to escape the late spring heat. Those carrying betting slips for No. 4, Courageous Lady, are in luck. For the rest, there's always the next race.

In spite of the U.S.-led invasion and years of sectarian violence, the Baghdad Equestrian Club has carried on. Each Tuesday and Saturday, Iraqis converge on the club's racetrack in a dusty and sometimes dangerous corner of Baghdad, where Sunni and Shiite extremists have each held sway.

As the old-timers in the crowd will tell you, this is a seedy imitation of the glamorous scene at the original track, built by the British after World War I in the posh Mansour neighborhood. Gone are the purebred Arabian horses, the trimmed hedgerows and the gentlemen in their suits. But in the face of hardships that brought so much of Iraqi life to a crashing halt, the members of the Baghdad Equestrian Club have displayed an astonishing tenacity in clinging to the remains of their secular pleasures.

Through a lopsided, broken-toothed grin, 60-year-old Mohid Daoud says he's been a track regular for 40 years. Oh, the old days were of course much better, he says, shrugging his shoulders, but what else is there to do for fun in Baghdad?

In another corner of the racetrack restaurant sits Abu Khaled, a wide man with a wider grin and a voice that could crush gravel. He, too, has four decades of Baghdad racing under his voluminous belt, and he tries not to miss race days because you never know when luck will come knocking.

"Usually the ones who have good days are the owners, when their horses win," he says. "But I do remember once in the old days, I didn't have any money but I came to the track anyway. A friend helped me out and gave me a tip on horse No. 12. I won $2,500!"

The Quran forbids gambling, of course, not to mention drinking. But the betting windows are crowded, despite rumors that some of the races are fixed. And although the club has a no-alcohol policy, evidence abounds that bring-your-own-beer is a widely followed practice.

During the height of the sectarian bloodshed a few years ago, one track employee was kidnapped and a car bomb blew up near the entrance. Several employees and horse owners were forced to flee the country, but races resumed after only a brief pause.

Inside the badly faded elegance of the executive offices, the club's deputy director, Abdel Aziz Sheikh Ali, does his best to maintain standards. In a serviceable gray suit, his face wreathed in cigarette smoke, he's surrounded by pictures from the glory days of the 1930s and '40s, when celebrities and royalty would pass a pleasant afternoon at the track.

"In the old days, our track was the greatest in the Middle East," he says. "Even Sheik Zayed, ruler of the United Arab Emirates, came and praised our club and promised to build one like it in the UAE. The members were very high-class people."

The Mansour track was relocated in 1995, when Saddam Hussein decided to build a mosque on the original site. The money to build the new track dried up before it could be finished. The problems continue -- including a swarm of illegal bookies who collect bets but don't contribute to the upkeep of the club.

High above it all in the announcer's booth sits Hamid Ismail. The club's longtime electrician, he filled in three years ago when the old announcer fled the country and has been calling races ever since. With a last puff at his cigarette, he flips a switch on a vintage amplifier, picks up his microphone and reaches for the starter's bell.

Four stories below, for approximately the next minute and a half, a few hundred Iraqis will forget their desperate present and uncertain future, breathlessly waiting for the fleeting thrill of the pounding of hooves on a dusty track.