Accessibility links
In Belgium, A Ceremony For An American Hero America's Memorial Day is an occasion for large ceremonies in Belgium, a country twice liberated by U.S. soldiers. But in one small town, a ceremony will celebrate the memory of Gerald Sorensen, a U.S. airman who was shot down -- and joined the resistance. 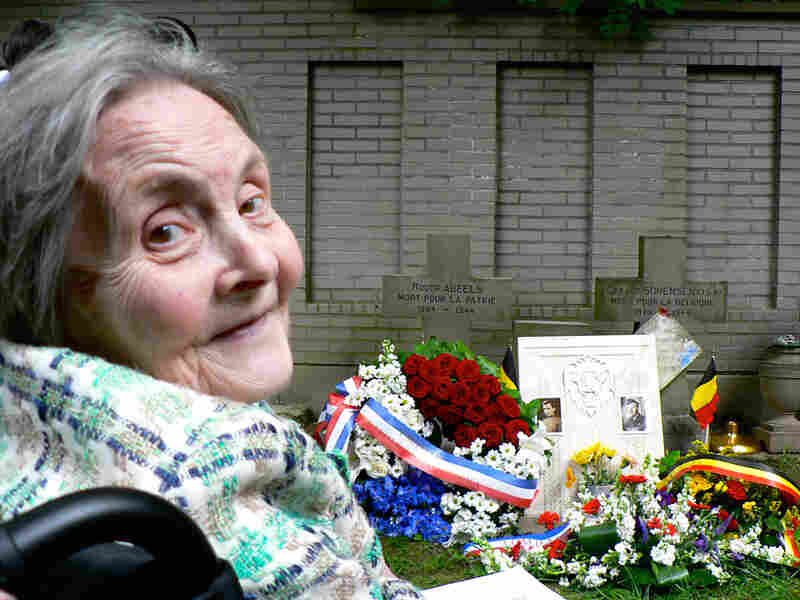 Jenny Abeels visits the graves of her brother, Roger, and U.S. airman Jerry Sorensen. The pair were killed after working with resistance forces in Belgium. Teri Schultz hide caption 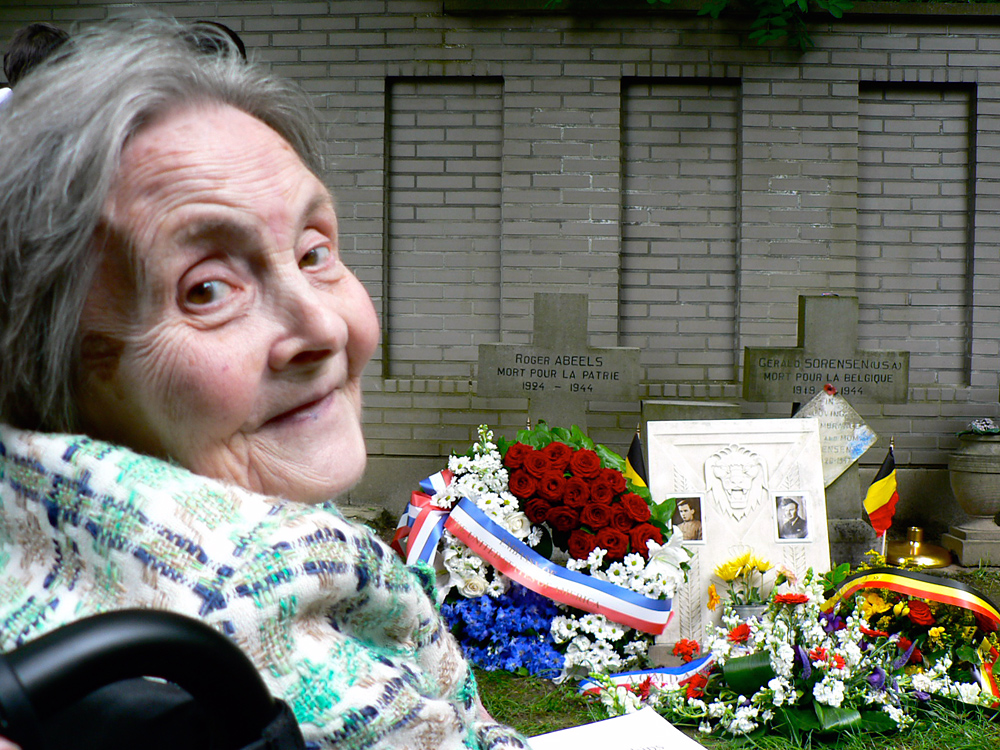 Jenny Abeels visits the graves of her brother, Roger, and U.S. airman Jerry Sorensen. The pair were killed after working with resistance forces in Belgium.

America's Memorial Day is an occasion for large ceremonies in Belgium, a country twice liberated by U.S. soldiers. But in one small town, a ceremony will celebrate the memory of Gerald Sorensen, a U.S. airman who was shot down -- and joined the resistance.

Sorensen, an Air Force gunner from Pocatello, Idaho, evaded capture by the Nazis after his plane crashed, and was hidden by a local Belgian family. He was later killed along with the family's eldest son, who was a resistance fighter.

It was 66 years ago that Sorensen was aboard a B-17 that had just been disabled by German fire after bombing railway lines. The 10-person crew was told to bail out over Belgium.

Sorensen, who was 24 at the time, survived that challenge and more, becoming a hero to many along the way. But his story of bravery was lost to a generation of Americans, even as it remained very much alive in the heart of one Belgian woman.

Sitting at a desk in the home where she's lived all her 80 years, Jenny Abeels turns the yellowed pages of her photo album with a mixture of pride and pain. In this world, 1944, she is 14 and her adored brother Roger is 20. They are laughing in their backyard with two handsome friends.

"I was so happy to have the three of them together. Yes, that was the best," Abeels says. 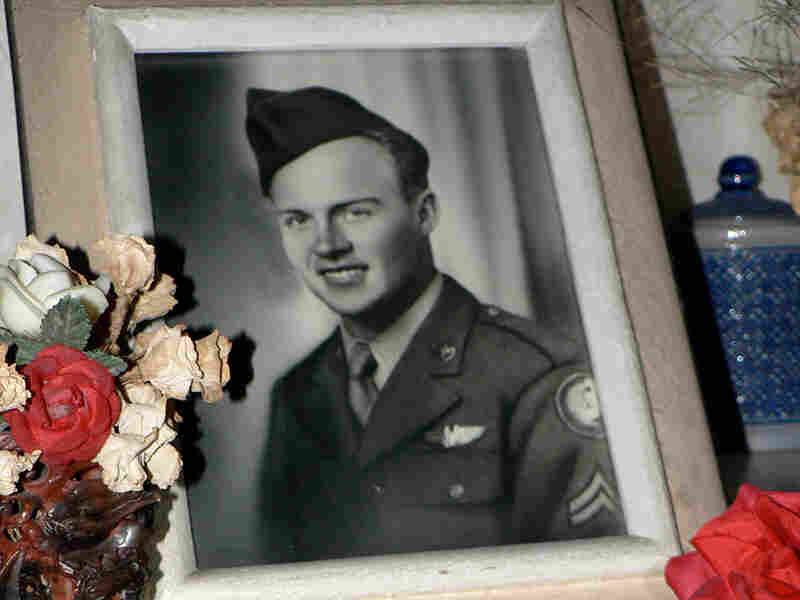 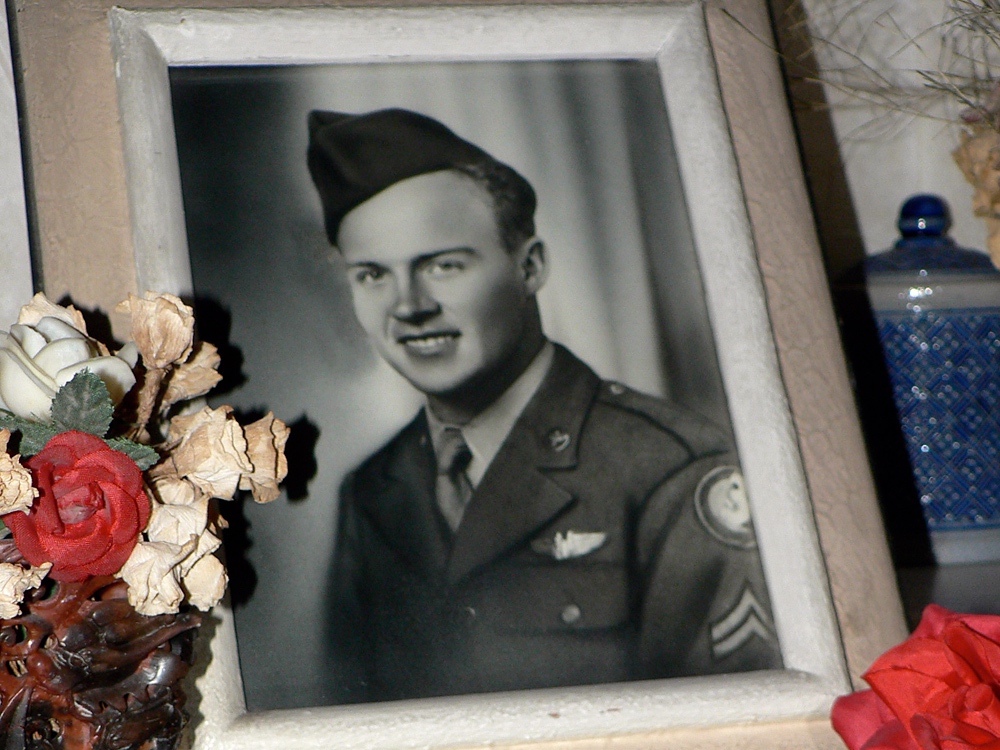 A photo of Jerry Sorensen in Jenny Abeels' home in Ganshoren, Belgium, near Brussels.

What isn't obvious from the faded snapshots is that it's World War II in Nazi-occupied Belgium. Roger is a member of the underground Belgian resistance, the "Secret Army" fighting against the Germans.

The other two men are downed American aviators, Bernard "Mac" McManaman of Michigan and Gerald "Jerry" Sorensen of Idaho. They were being hidden in the Brussels suburb of Ganshoren by the Abeels family -- who were risking their own lives.

Shrugging, Jenny says, "We knew it ... we knew if we were caught we would be killed."

The Germans never came to the house, but what did arrive was the third summons in a row for Roger to go to a German work camp. He, McManaman and Sorensen escaped to another town, where they helped in the resistance movement.

On Sept. 3, Brussels was freed by Allied troops. Mac arrived at the Abeels family home that night; he said Roger and Jerry were on their way. But two days later, a messenger brought devastating news.

As Abeels remembers, "I heard a terrible cry, and I ran in and said what happened? And my mother said Roger and Jerry are dead. I always say, this time I won't cry. I loved them so much."

They had been killed by departing German soldiers.

The men's bodies were brought to Ganshoren and interred in the small cemetery there. The U.S. government wanted to move Sorensen's remains, but his family succeeded in convincing authorities that he would have wanted to be buried in Ganshoren.

Just a few blocks from where Abeels and Sorensen lie next to each other in the Ganshoren cemetery, the community named two streets after the friends: Sgt Sorensenstraat and Roger Abeels straat.

But then the Sorensen story gradually faded to black -- except for Jenny Abeels, who spent all her free time at the gravesite.

"When other girls were going to dances, I was going to the cemetery," she says.

Jerry Sheridan, a professor and part-time historian active in the American Overseas Memorial Day Association, had heard of "isolated graves" of U.S. servicemen. He discovered that there are eight in Belgium, including Sorensen's.

On Monday, Sheridan led the first formal Memorial Day ceremony in 63 years at tiny Ganshoren cemetery, with Jenny Abeels as the guest of honor.