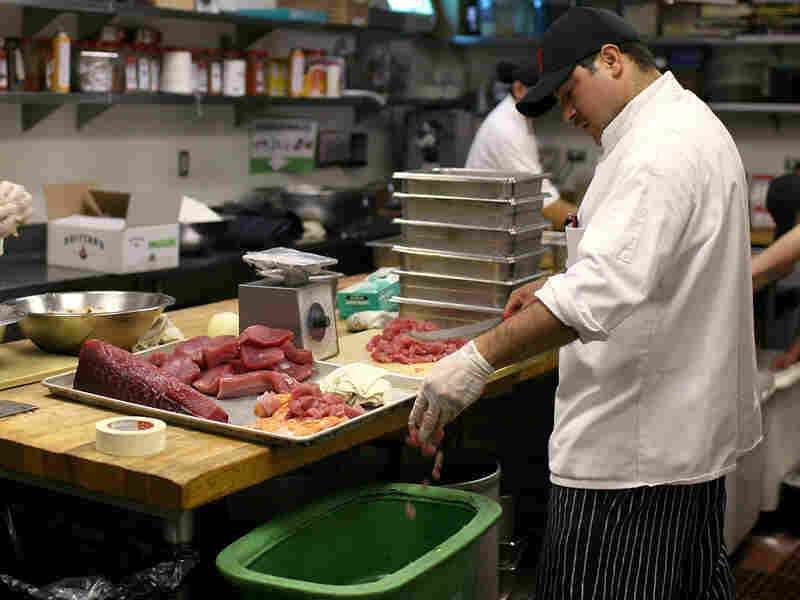 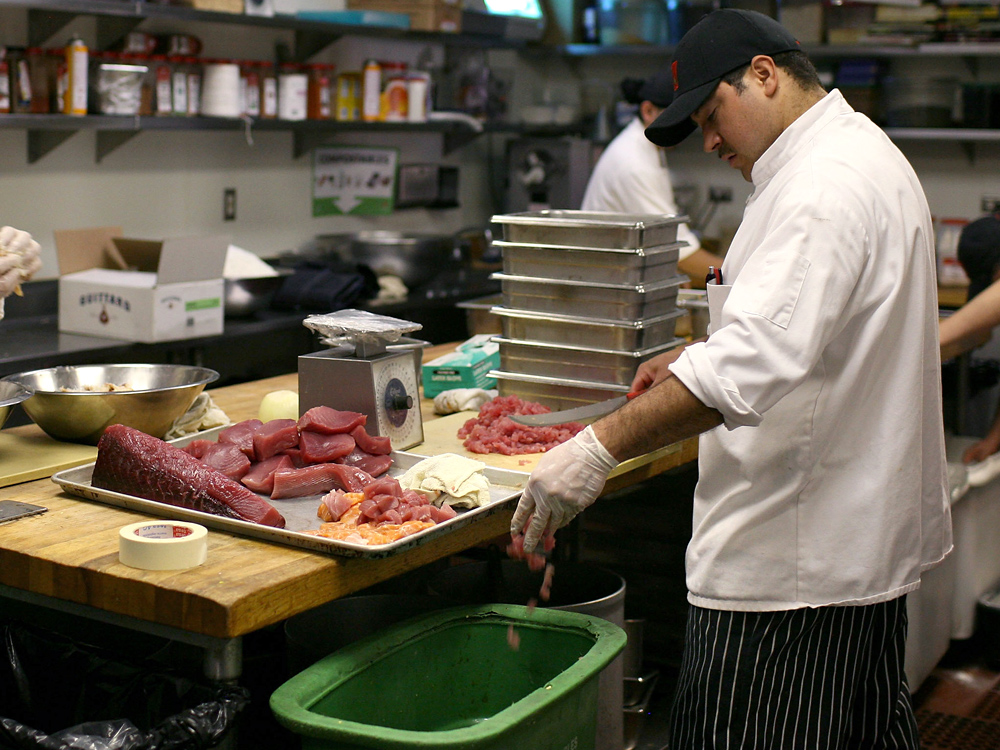 A cook drops fish skin and fat into a recycling container at MoMo's restaurant in San Francisco, Calif. A New Hampshire company is modeled on the city's program, which sells nutrient-rich compost to Bay Area farmers.

A new green startup business in New Hampshire collects compostable material from local cafes and restaurants. The company's business model is to help restaurants be more eco-friendly -- and save money on trash removal.

At the Black Trumpet restaurant in Portsmouth, N.H., chef and co-owner Evan Mallett says he’s long wanted to compost, but no one could offer regular pickups, and their tiny restaurant has no extra space for storage.

But then, a young, idealistic entrepreneur named Rian Bedard offered a solution. Bedard had recently moved from San Francisco -- which requires that its residents separate their trash and compost.

In November, he and a friend started the company Eco-Movement.

They haul their clients’ compostable waste to two local facilities, where it’s broken down and sold to landscapers and farmers. Rather than a flat fee, the restaurants pay based on the amount of waste they produce.

"We try to reduce the rate, because we think it’s unbelievable what most of the companies are charging," Bedard says. "And we want people to be incentivized, not only by the cost savings, but by doing this for the environmental reasons. So we just looked at their overall costs and reduced it by 15 to 20 percent."

Mallett estimates the service will save him about $150 a month.

"Something that is good for the environment, good for the world around us, also costs less money. It’s a no brainer," Mallett says.

Currently about 30 businesses contract through Eco-Movement for compost removal. One client is Bella Sol Restaurant, where Jeffery Cobbs is the head chef.

"As soon as you put the procedure in place, it’s very easy," Cobbs says. "You take your compost bucket, you have it online with you, you throw all of your scraps from the produce that you get -- and it goes out at the end of the night, and those guys come and pick it up for you."

Bella Sol owner Brian Pearson estimates that the service has cut the restaurant’s trash removal expenses by at least 75 percent.

That means the company that hauls their trash, Waste Management, earns less money. But Steve Cates, the company’s district manager, says Eco-movement is not viewed as competition.

"The company is very supportive of recycling," Cates says. "Do we look at this as a threat? Absolutely not."

Cates won’t say if Waste Management will eventually offer its own compost services. Bedard says that could put his operation out of business. But he wouldn’t consider it a failure, he says, because he would have shown that the demand for composting exists.