Accessibility links
BP Prepares For Next Attempt At Stopping Oil Leak Even if the latest plan -- to cut the leaking pipe and cap it -- works, attempts to capture the oil might fall short, and company officials say the spill may not be stopped until relief wells are completed in August. But the prospect of waiting two more months has those who live, work and play along the Gulf Coast fuming. 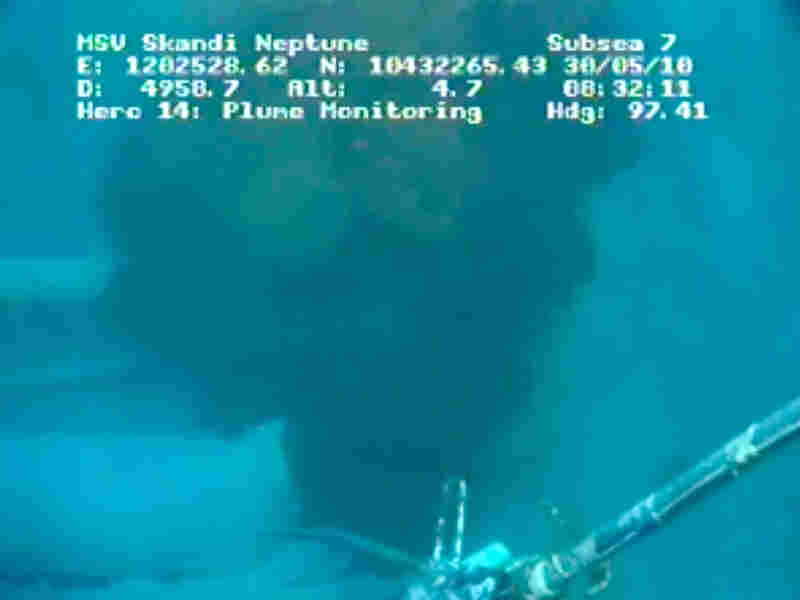 BP could start Wednesday on its latest attempt to stem the flow of oil gushing into the Gulf of Mexico. The plan is to cut the leaking pipe and try to cap it, then send the captured oil to the surface. But even if it works, not all of the oil would be collected, and officials say the spill may not be capped until two relief wells are completed in August. The prospect of waiting two more months has those who live, work and play along the Gulf fuming.

Sport fisherman Rob Defraites says if oil continues to spill until August, there won't be any fish or birds left. He's come down from New Orleans to fish in the waters off the southernmost tip of Louisiana in Venice, where the sign at the local marina says "best fishing in the world."

Defraites' friend uses an electric knife to clean their day's catch: red fish, flounder and a couple of dozen speckled trout, which he washes off with a small hose.

Some of the waters in the southeastern tip of Louisiana are still open to fishing. However, more than a quarter of federal fishing areas have been closed.

According to government estimates, anywhere from 20 million to 43 million gallons of oil have spilled into the Gulf. And officials say BP's latest fix, to cut the leaking riser pipe, may in the short term cause 20 percent more oil to gush out of the well until a cap is put in place. Even if the cap is attached properly, some oil will still leak out while BP tries to collect the flow and bring it to the surface.

Jane Lyder, a deputy assistant secretary at the Department of Interior, says exactly how to cap the well isn't clear yet.

Lyder took a boat tour of the inlets and marshes around Venice Monday and says she found at least one ray of hope.

"We haven't seen a large amount of wildlife death yet. This is a warm environment, unlike in the Exxon Valdez in Alaska, [where] birds died of exposure very quickly because they couldn't keep themselves warm," she says.

But she also says she saw fish feeding on the oil, which will ultimately be eaten by birds and sicken them. And hundreds of birds have already been covered in oil. More than 50 of the oily birds have been brought to a large warehouse near Venice, where workers try to clean them.

Three workers, covered with yellow rubber aprons and plastic gloves up to their elbows, hold a brown pelican covered in oil. In a special tub, they take nearly a half-hour to clean the huge bird using Dawn dish soap and small squares of white towels, scrubbing its body. They delicately clean around the pelican's face and beak with children's toothbrushes.

Jay Holcomb of the International Bird Rescue Research Center says he fears he will be cleaning birds for several more months.

"As long as the birds are still at risk, I think the whole summer -- God help us -- we'll be here," Holcomb says.

And that's only if the well is truly shut off by August.