Accessibility links
Egypt Opens Gaza Border Crossing After Israeli Raid Pro-Palestinian activists say they have sent another boat to challenge Israel's blockade of the Palestinian territory in the wake of Monday's raid on a flotilla carrying humanitarian aid. The U.N. Security Council condemned the "acts" that resulted in the loss of at least nine lives during the confrontation. 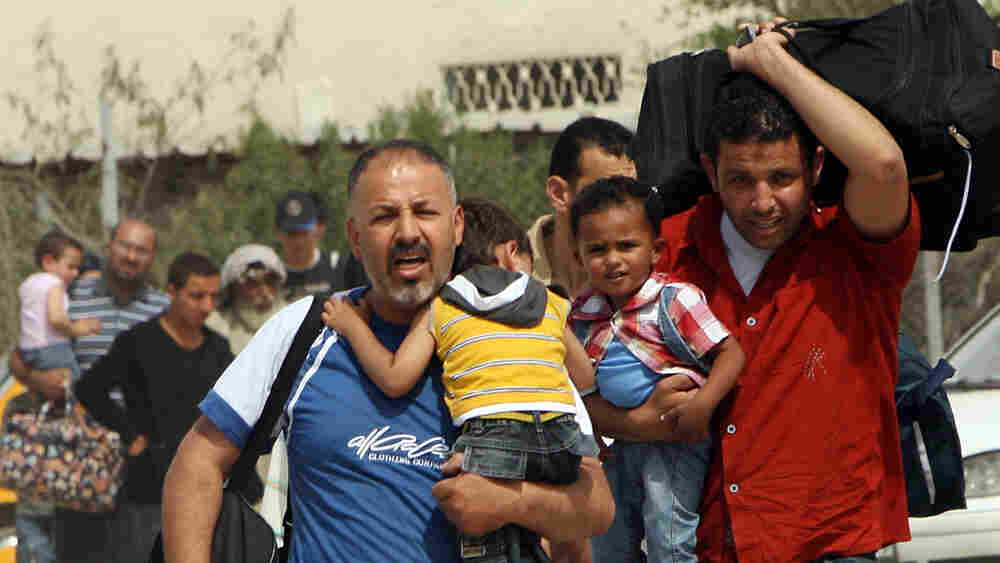 Palestinians carry their belongings Tuesday as they head toward the newly opened border crossing with Egypt in Rafah in the southern Gaza Strip. Said Khatib/AFP/Getty Images hide caption 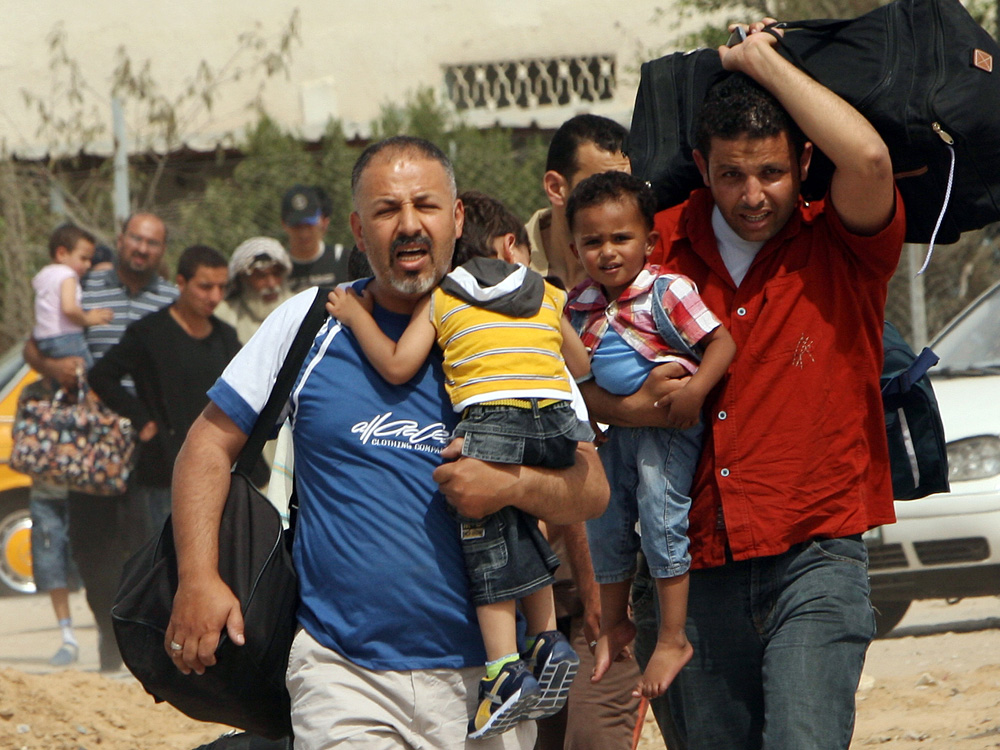 Palestinians carry their belongings Tuesday as they head toward the newly opened border crossing with Egypt in Rafah in the southern Gaza Strip.

Thousands of people in Gaza raced to the border after Egypt temporarily opened a crossing into the Palestinian territory on Tuesday, a day after nine people were killed during an Israeli raid on an aid flotilla.

Egyptian officials said President Hosni Mubarak ordered the Rafah crossing opened for several days. Cairo and Israel imposed a blockade of Gaza after the militant group Hamas, which is allied with Egyptian opposition groups, violently seized the Gaza Strip in 2007.

International outrage over Monday's raid has led to calls for Israel to end the blockade of Gaza, home to 1.5 million Palestinians. The U.N. high commissioner for human rights, Navi Pillay, said its continuation undermines human rights on a daily basis.

Mark Regev, a spokesman for Israeli Prime Minister Benjamin Netanyahu, acknowledged that the operation had resulted in an increase in sympathy for those in Gaza.

"In fact, if I look at some of the coverage, especially in Europe, they are getting sympathetic treatment," Regev told NPR's Robert Siegel. "But for us, the first and most important thing is we have to defend our people, and if keeping that naval blockade in place is defending our people, we will do so."

Pro-Palestinian activists said Tuesday that they had sent another boat to challenge the blockade.

Greta Berlin of the Free Gaza Movement, which organized the flotilla, said another cargo boat was off the coast of Italy en route to Gaza. She said a second boat carrying about three dozen passengers is expected to join it, and that both boats would arrive in the region late this week or early next week.

"This initiative is not going to stop," Berlin said from the group's base in Cyprus. 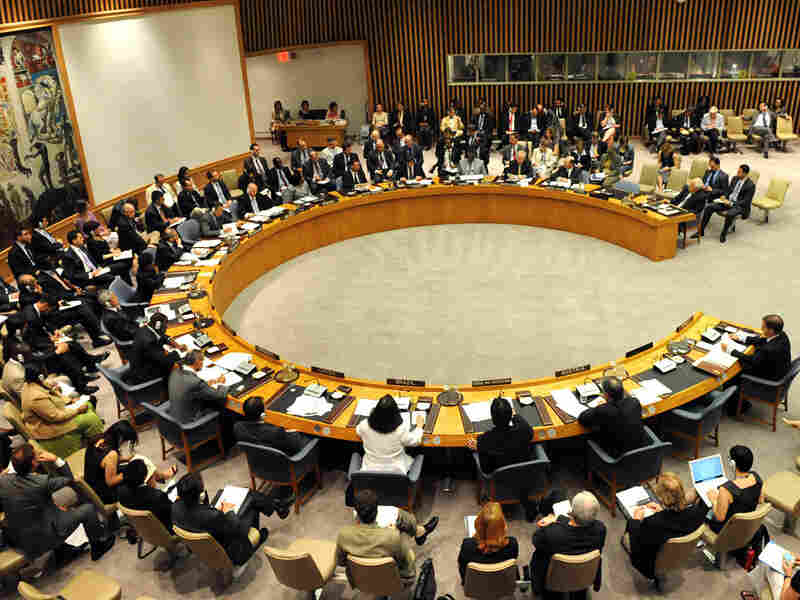 Members of the U.N. Security Council met at the United Nations on Monday for an emergency meeting on the Israeli commando raid that has provoked international outrage and a diplomatic crisis. Louis Lanzano/AP hide caption 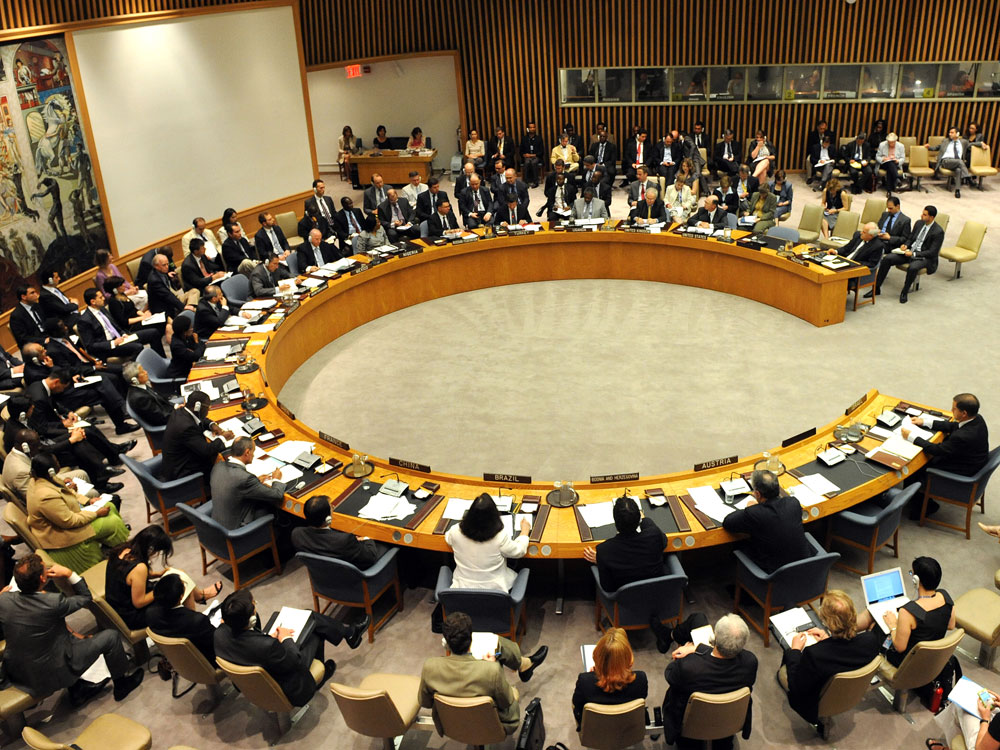 Members of the U.N. Security Council met at the United Nations on Monday for an emergency meeting on the Israeli commando raid that has provoked international outrage and a diplomatic crisis.

"We think eventually Israel will get some kind of common sense. They're going to have to stop the blockade of Gaza, and one of the ways to do this is for us to continue to send the boats," she said.

Meanwhile, after marathon emergency negotiations, the U.N. Security Council condemned the "acts" that led to the nine deaths and called for an "impartial" investigation. The 15 council members finally agreed on the presidential statement after 12 hours of talks. It was weaker than what was initially demanded by Arab leaders and Turkey because of objections by the United States, Israel's closest ally.

The Islamic nations had called for condemnation of Monday's attack by Israeli forces on the flotilla "in the strongest terms," and "an independent international investigation."

The pro-Palestinian activists were killed Monday after Israeli Special Forces rappelled from helicopters onto the largest of the six ships attempting to breach the blockade. The ships carrying nearly 700 activists were intercepted in international waters after aid-mission organizers ignored warnings to submit their cargo for inspection.

Video taken of the raid aboard the Turkish-flagged Mavi Marmara showed activists attacking the commandos with metal rods. One soldier was thrown overboard while others jumped into the water to escape the mob. Israeli authorities said the activists attacked with knives, clubs and two pistols wrested from commandos. The Israeli forces then opened fire.

But among the activists on the flotilla, the version of events was different.

Haneen Zoabi, a member of the Israeli Knesset who was among the activists on the flotilla, said Israel was being selective in the videos and statements it was choosing to release. Zoabi could not be deported or charged because of her legislative immunity.

Huwaida Arraf, an activist with the Free Gaza Movement who was aboard one of the vessels in the flotilla, told NPR's Siegel that the coalition had agreed no violence would be used.

"However, I can't guarantee or say that some people didn't try to fight back," she said. "But we didn't have any guns, and I know that because I myself at one point had to transfer to the Turkish ship because our ship was having mechanical problems. As soon as we entered, they took us aside, checked us to make sure we weren't carrying weapons."

Israel said late Tuesday it would deport almost all of the activists from the flotilla within the next two days, but about 50 would be held for investigation into their part in the violence on at sea.

"What went wrong was the assumption that it would be simple and straightforward," Anshel Pfeffer, a military analyst for Israel's Haaretz newspaper, told NPR.

"In this case, there was a group of 30 or 40, and they were obviously willing to put up a ... very, very spirited fight, and the number of naval commandos was not enough to overtake them. The ferocity of the operation took them by surprise," Pfeffer said.

The front page of Israel's daily newspaper Maariv pronounced the raid a "debacle," but the paper praised the bravery of commandos who were taken off guard.

Protests have erupted in the Arab world and across Europe.

Turkish Prime Minister Recep Tayyip Erdogan called the Mavi Marmara raid "a bloody massacre." At least four of the activists killed were Turkish citizens, and the other five were also believed to be Turks. Turkey, which unofficially supported the flotilla, expelled Israel's ambassador Monday.

The incident "marks a low point in relations between the Jewish state and what is often considered among the most moderate of Muslim countries," Hugh Pope of the International Crisis Group told NPR.

Pope described relations between Turkey and Israel as up and down but noted that they have been "declining for some time."

"Each time that Israel has attacked the Palestinians or is seen by international or Turkish public opinion as being unfair to the Palestinians, you see a Turkish reaction," he said.

Edward Peck, a former U.S. ambassador who was among the activists trying to break Israel's blockade, said Israel's policies will ultimately hurt everyone involved in the conflict.