Accessibility links
Artist Tattoos Indelible Iraq Memorial Into His Skin Iraqi-born visual artist Wafaa Bilal has turned his own back into a casualty map of the Iraq war. He has the names of cities in Iraq etched into his skin in Arabic script. Around each city, dots represent casualties: red ink for the American soldiers, ultraviolet ink for the Iraqi civilians -- invisible unless seen under black light. 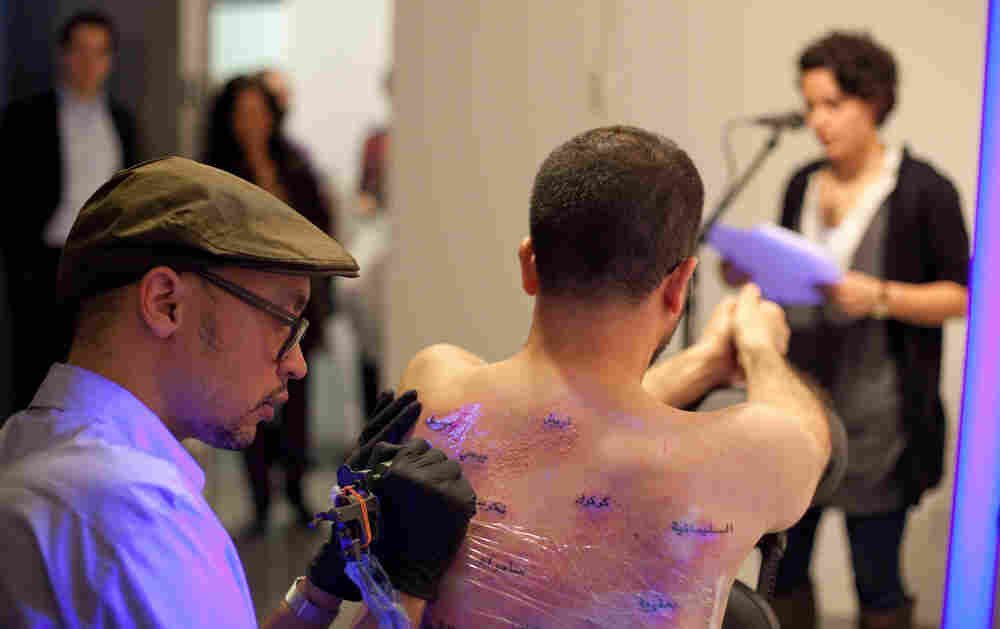 Artist Wafaa Bilal has his back tattooed with dots representing casualties of the Iraq war as names of the fallen are read aloud. Names of Iraqi cities are etched into his skin, and the dots are placed near the city where each individual died. Brad Farwell/www.bradfarwell.com hide caption

On Memorial Day, Americans paused to remember the nation's men and women who died in combat. For Iraqi-born visual artist Wafaa Bilal, the effort to remember casualties of war is an ongoing and permanent project -- tattooed into his skin.

Bilal's latest work is called ... And Counting. On a spring evening at the Elizabeth Foundation in New York, he stepped up to the microphone and read the first name out loud -- Samir Azeez. The artist then removed his sweater, tied his kaffiyeh around his waist, and took his place, face down in a black, leather chair.

Names of Iraqi cities had already been permanently mapped out across his back in Arabic script. Over the next 24 hours, they would be barraged by dots of ink, thousands and thousands of them -- each representing a casualty of the Iraq war. The dots are tattooed near the city where the person died: red ink for the American soldiers, ultraviolet ink for the Iraqi civilians, invisible unless seen under black light. 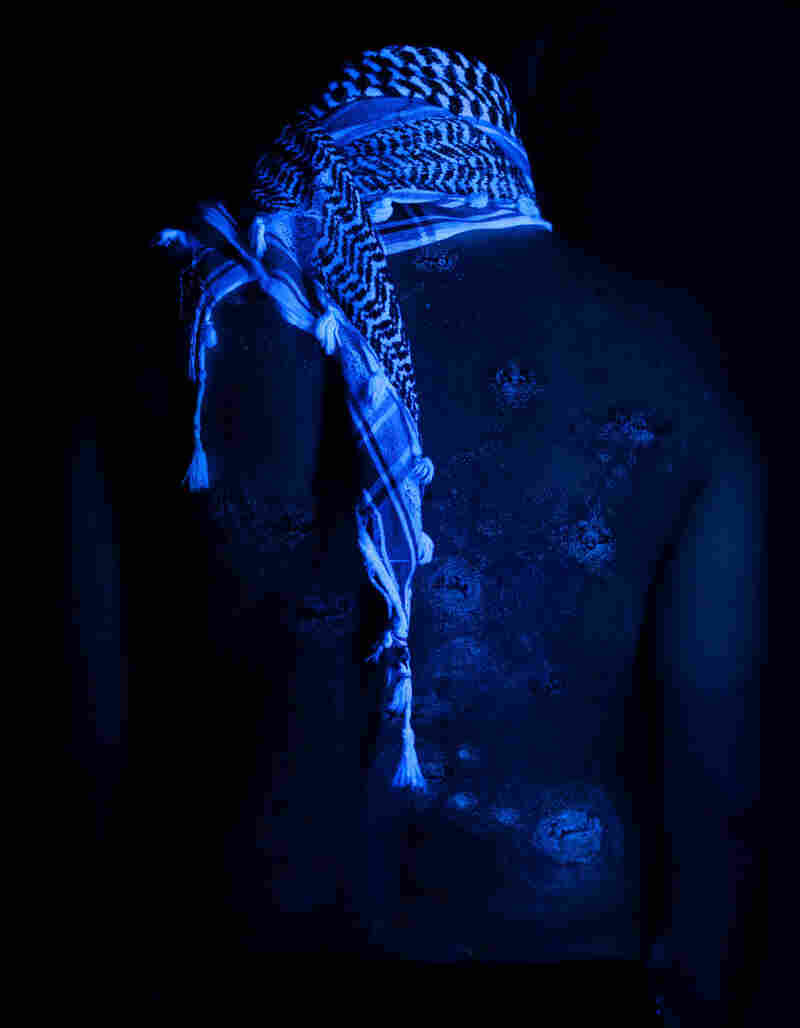 When seen under a black light, Bilal's back lights up with tattoos representing war dead. Brad Farwell/www.bradfarwell.com hide caption 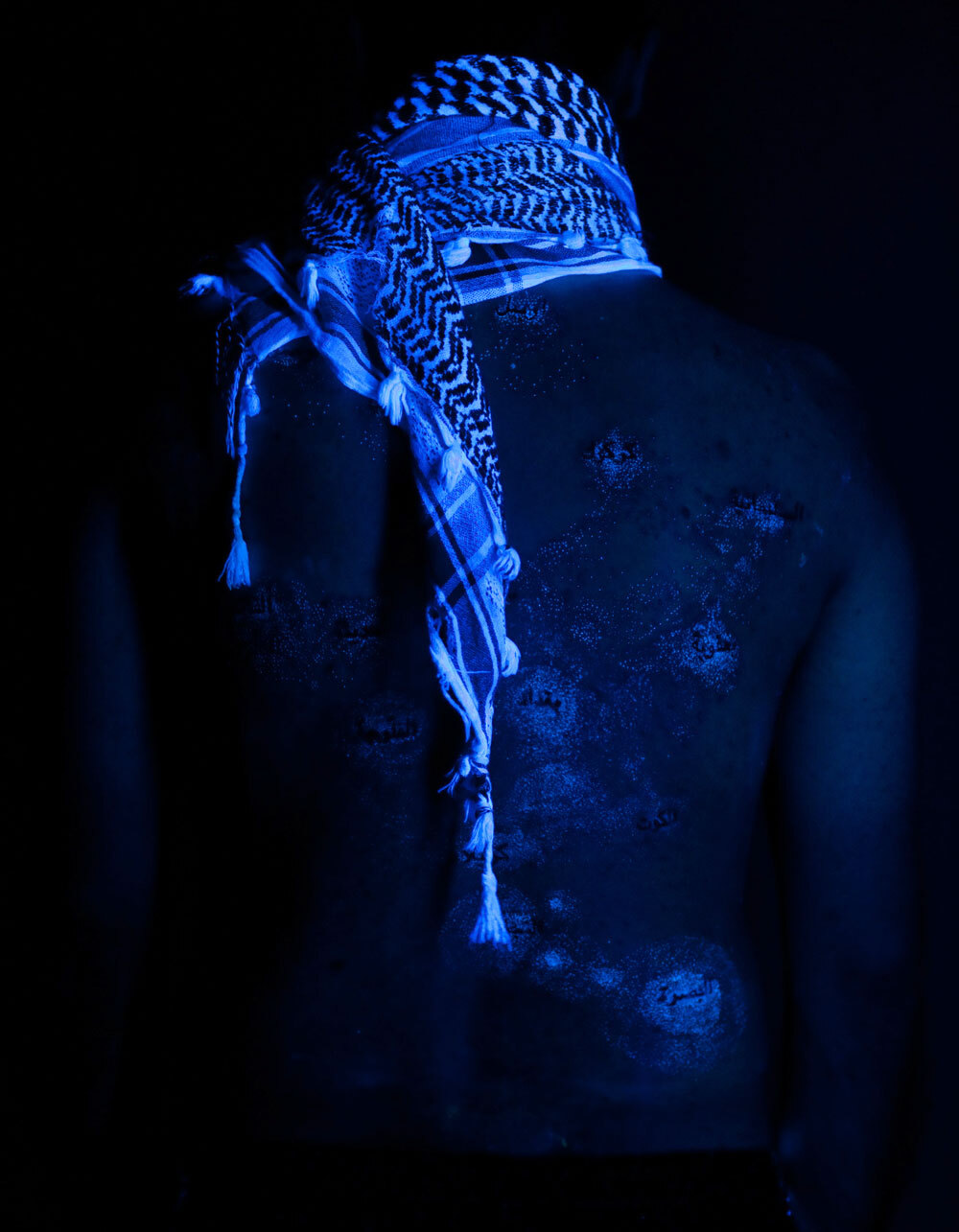 When seen under a black light, Bilal's back lights up with tattoos representing war dead.

"We are talking about 100,000 Iraqis who have died and 5,000 American soldiers," Bilal says. "They're not visible. Many people don't even know the number."

As the seventh anniversary of the Iraq invasion quietly passed by in March, the number of American soldiers hadn't quite reached 5,000. But at least 95,000 Iraqi civilian casualties have been documented. Estimates based on polling exceed 1 million.

Bilal hopes to rescue these numbers from the realm of the abstract. The objective for ... And Counting is to trigger a visceral response in those who see the project in the gallery or on video.

"The idea of receiving a single dot for each death -- yes, I'm carrying that on my back now. But the body has its own language. You feel that pain as much as I feel it. You're kind of putting yourself in my place as well," says Bilal.

Onlookers visibly flinched at the rapid-fire motion of the needle, which made the part of the map on Bilal's lower back around the city of Basra look like a blistering sun. Volunteers from among the dozens of gallery spectators took turns reading the names of the dead.

Hearing those names helped Bilal focus on his own emotional pain -- his brother Haji was killed by an air to ground missile in 2004, more than a decade after Bilal fled Iraq.

Although he officially studied geology at the University of Baghdad, Bilal was really a painter. The political content of his work placed him under scrutiny by government-appointed campus officials and his exhibitions were shut down. It would not be the last time.

Two years, ago, during a residency at Rensselaer Polytechnic Institute in Troy, N.Y., Bilal came up with the idea for Virtual Jihadi. It began with a video game in which American soldiers battle Iraqi fighters who all look like Saddam Hussein. The game had been hacked by people claiming to be associated with al-Qaida and transformed into a hunt for former President George W. Bush.

Bilal took this version of the game and inserted a character based on himself, who could be recruited as a suicide bomber. The artist's intention was social commentary on the use of technology to sanitize war and the use of video games as military recruiting tools.

"Being in the middle of the war, it's a completely different experience than being in a video game," says Bilal. "What the U.S. Army is adopting more and more is that video game mentality -- because they wanted that disconnection between reality and the soldiers, to have them disengage."

Rensselaer students didn't get a chance to engage. University officials shut down the show before it could open.

Instead, Virtual Jihadi opened off-campus amid protests, both for and against the artist, at Troy's Sanctuary for Independent Media.

But that building was shut down the following day -- ostensibly for code violations. A lawsuit has been filed against the city by the New York Civil Liberties Union.

The idea that technology creates a comfortable distance between the self and others was also at the core of Bilal's previous project, called Domestic Tension. It had him living for 30 days in a shooting gallery. Participants could log on to a website and aim a paintball gun at Bilal.

The results for ... And Counting have been more modest. But for those who have seen it, the project puts a face on an issue that seems distant for most Americans. And that's the point, Bilal says.

"It's not for fame. It's not for money. It's for one simple issue," says Bilal. "I have a family who have been under bombardment for so many years. And I think they deserve other people to hear their voice."

Back at the Elizabeth Foundation, Bilal did not succeed in getting all 100,000 dots that he'd hoped for. He'd withstood the pain, but his back was already covered at 25,000 dots. He vowed to continue once his skin healed. He asked somebody to hit the wall switch to see the work under black light, to see the invisible Iraqi deaths.

His flesh no longer looked like its own raging battle scene. It lit up like the night sky.