Accessibility links
Kitchen Window -- Beyond Shirley Temples: The New Maraschino Cherry Fishing the sticky-sweet, hot-pink orb from the bottom of a soda glass was a rite of childhood. But set aside that store-bought variety and make your own, with fresh cherries -- and a few fresh ideas for showcasing them. 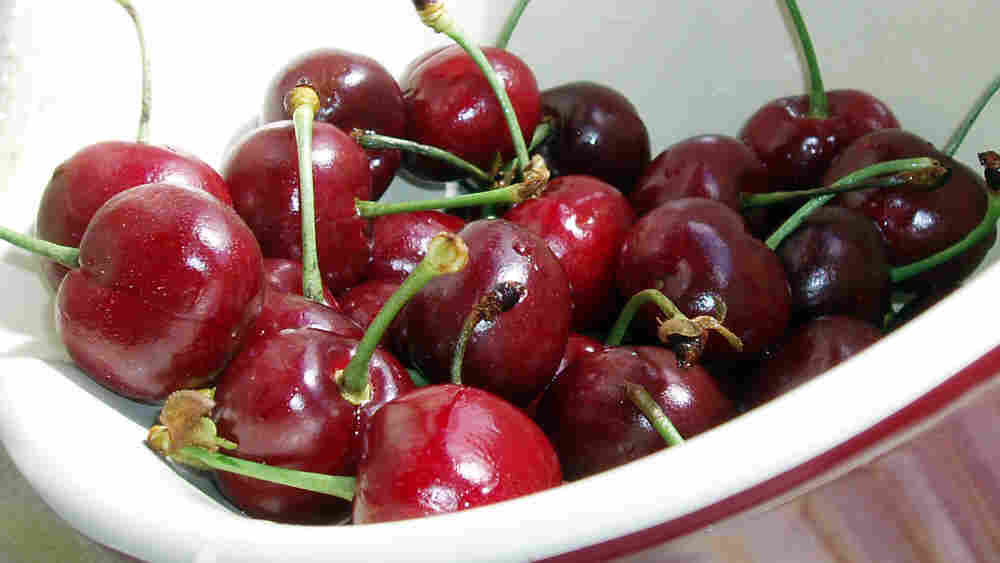 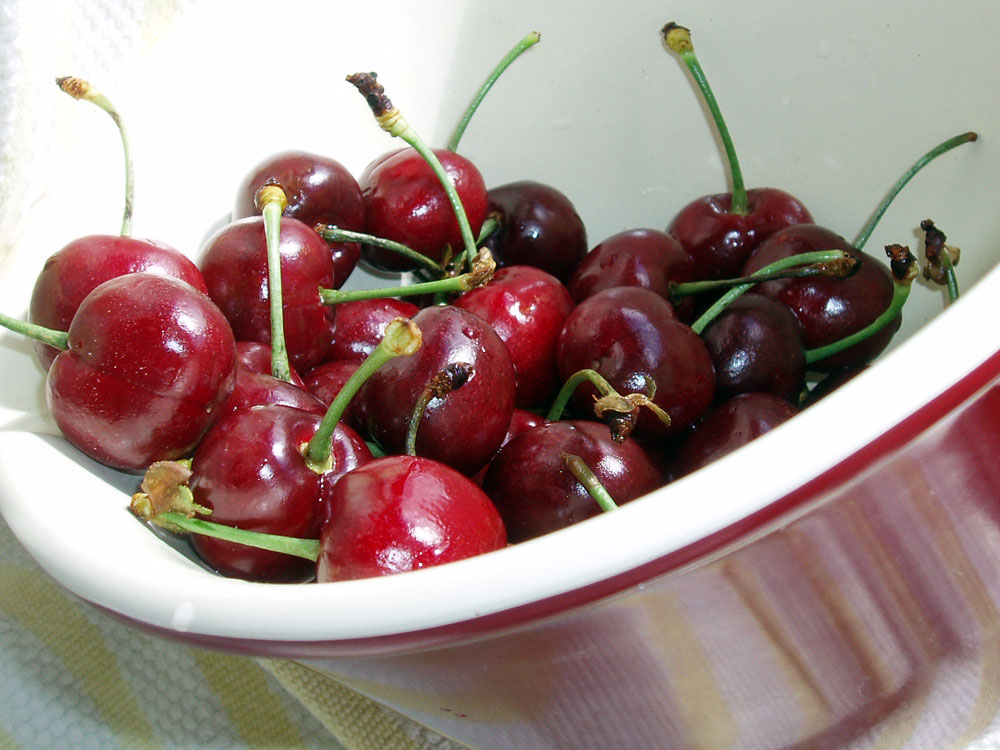 I have to admit, although grudgingly, that those hot-pink orbs now seem too sticky-sweet to me. But with cherry season upon us, I'm gearing up to hit the market and make my own, from-scratch, very grown-up maraschino cherries.

I miss maraschino cherries. I know they are deeply unfashionable -- ersatz, lurid neon red and candy sweet. But they remind me of being a kid. In particular, they remind me of childhood Shirley Temples -- the pink, imbibable bribe my sister and I got to sit still at our parents' favorite steakhouse while they enjoyed their surf and turf. We would devote considerable effort to fishing out the cherry, the prize at the bottom of the fizzy Cracker Jack box.

I'm not the only one to miss the humble garnish: Writer James Villas once admitted that, in the backlash against Red Dye No. 2, he resorted to carrying his own supply of maraschino cherries in a small Advil bottle.

"A Manhattan or whiskey sour without a cherry looks naked and ugly," he wrote. "And how dangerous can those tasty sweet cherries be when, for heaven's sake, they haven't hurt Shirley Temple all these years?"

I have to admit, although grudgingly, that those hot-pink orbs now seem too sticky-sweet to me. But with cherry season upon us, I'm gearing up to hit the market and make my own, from-scratch, very grown-up maraschino cherries.

Around the country, those same clever bartenders who make their own grenadine and brew house-made ginger beer are also making proper maraschino cherries, whether soaked in Luxardo Maraschino liqueur, brandy or another liqueur. So I asked a bartender buddy for his recipe: "Cover a bunch of cherries with Luxardo and let it sit as long as you dare," he said with a wink. "Two weeks minimum, though."

Some people add sweeteners or flavorings such as cinnamon or almond oil, he said, and I was instructed to leave the pits and stems intact and let alchemy work its magic for the best effect.

In fact, this minimalist recipe is closest to the original concept from the golden age of cocktails. Consider this excerpt from a 1910 newspaper story:

"A young woman engaged a room at a fashionable hotel and, after ordering a Manhattan cocktail, immediately sent for another. Soon she was ordering them by the dozen. The management interfered and someone was sent to expostulate with her; also to find out how she had been able to consume so many cocktails. She was found surrounded by the full glasses with the cherry gone."

I relate to that young lady. However, her story doesn't have a happy ending: The growing temperance movement frowned on booze-soaked cherries, and soon manufacturers began to churn out nonalcoholic, sweetened cherries similar to the ones we know and love/hate today.

As we're now returning to the romance of speakeasy-style bars and pre-Prohibition cocktail recipes, I'm ready for post-Prohibition cherries.

Kara Newman is a New York-based food, wine and spirits writer, and the author of Spice & Ice: 60 Tongue-Tingling Cocktails. Learn more at the Spice & Ice blog.

So when cherries hit their gleaming, dark-red luscious best, I bought a carton at the market, washed them well and enshrined them in a Mason jar full of Luxardo. Some recommend authentic Marasca cherries, if you can get them from Europe, or naturally bright-red sour cherries -- nature's inspiration for Red Dye No. 2. I went with sweet cherries instead.

That's the easy part. Waiting, on the other hand, can be ridiculously difficult. With the ultimate self-restraint, I waited a full hour before plucking one from the liquid to try. Result: a highly alcoholic piece of fresh fruit.

So I waited a few more days (OK, it wasn't intentional; I simply forgot about them) and tried again. Better. The fruit had mellowed and softened, though it still appeared smooth-skinned and ripe. I detected a faint almond aftertaste, which I later learned was from the cherry stone.

As instructed, I allowed the fruit to rest a full two weeks, and eagerly returned to the jar. Bingo -- maraschino cherries, perfectly preserved, with a rounded, brandied flavor and pronounced, lingering cherry-almond aftertaste. It's an authentic taste and texture very far from the candy-pink specimens found on supermarket shelves.

I promptly bundled some cherries, still bobbing in the liqueur, to bring to my sister for making grown-up Shirley Temples. Childhood nostalgia is grand, we agreed, but adult indulgence is way better. 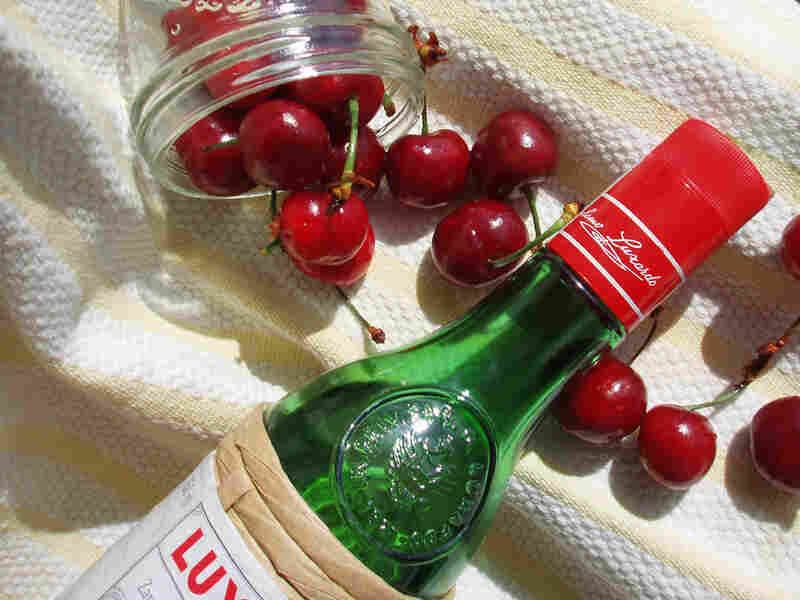 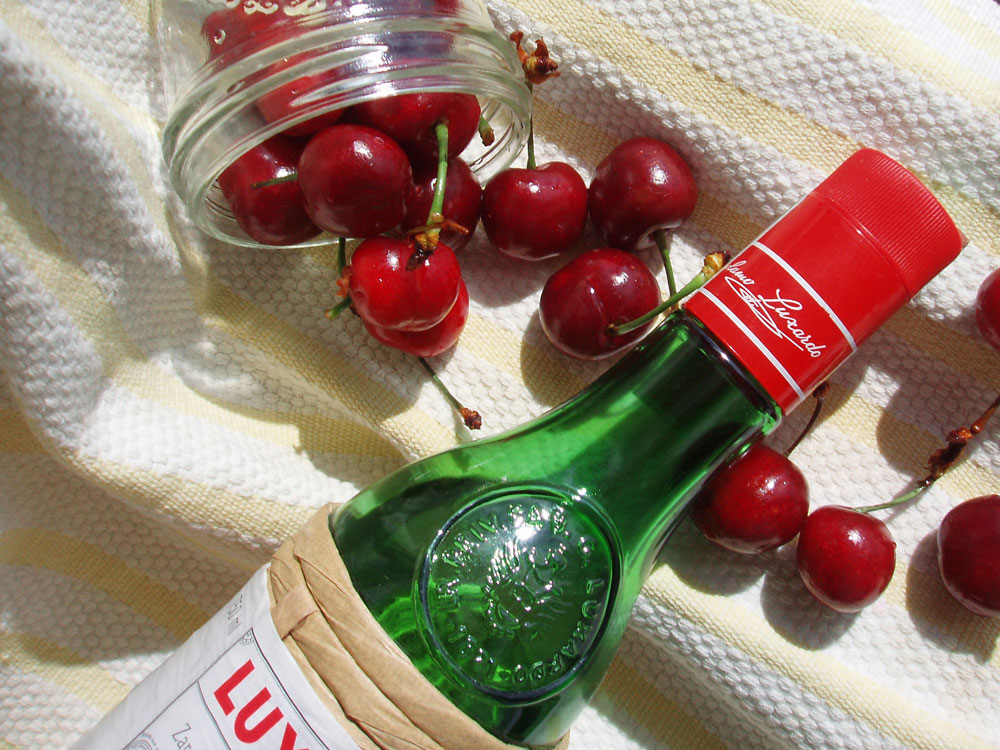 These are easy to assemble. The only hard part is waiting out the full two-week maceration period.

Place the cherries in a glass Mason jar or other container with a lid. Pour the liqueur over the cherries. The goal is to add enough liqueur to immerse the cherries, but they will bob to the top of the liquid anyway.

Refrigerate for at least 2 weeks. Gently swirl the container every 2 to 3 days to immerse the cherries in the liqueur.

If you can't bear to wait a full 2 weeks, or prefer nonalcoholic cherries, try this lovely version from Raising the Bar by Nick Mautone (Artisan 2004).

In a nonreactive saucepan, add the water, grape juice, sugar, lemon juice, salt and star anise. Place over medium-high heat and bring to a boil. Reduce the heat and simmer the mixture until the sugar has dissolved.

Add the cherries and almond extract. Simmer on low heat for 10 minutes or until the cherries have exuded some of their juice and the syrup has taken on a distinctly cherry flavor. Be careful not to overcook. The point is not to actually cook the cherries, but to heat them in the syrup just long enough to bring out their essence.

Remove the pan from the heat, transfer the cherries and the syrup to a bowl, and let cool to room temperature. Transfer to a container with a tight-fitting lid, cover tightly, and refrigerate. The longer the cherries steep, the more flavorful they will become.

The Manhattan is a classic cocktail with oft-debated origins. Some say we have a forward-thinking bartender from New York's Manhattan Club circa the mid- to late 1800s to thank for this drink. Others attribute its origin to a New Orleans colonel. Regardless, it's a sophisticated, strong and simple cocktail, and the ultimate showcase for as many maraschino cherries as you care to pack into your glass. The proportions for the drink are from Dark Spirits, an excellent guide by A.J. Rathbun (Harvard Common Press 2009).

Named after 1930s child star Shirley Temple, this is one of the original nonalcoholic "cocktails." Here's a more exciting but still nonalcoholic version for adult taste buds. Although spicy ginger beer is widely available in specialty grocery stores (I like the version made by Fentimans), substitute ginger ale if preferred.

1 1/2 teaspoons grenadine (look for a not-too-sweet version, such as Employees Only or Stirrings; pomegranate juice should be the primary ingredient)

In a tall glass half-full with ice, add ginger beer and grenadine. Stir together. Garnish with cherry and orange slice.

This may seem like a long recipe, but it can be done in stages. Take care in pitting and slicing the maraschino cherries -- they can be slippery. I recommend using a toothpick to split the cherry skin and wiggle the pit loose. 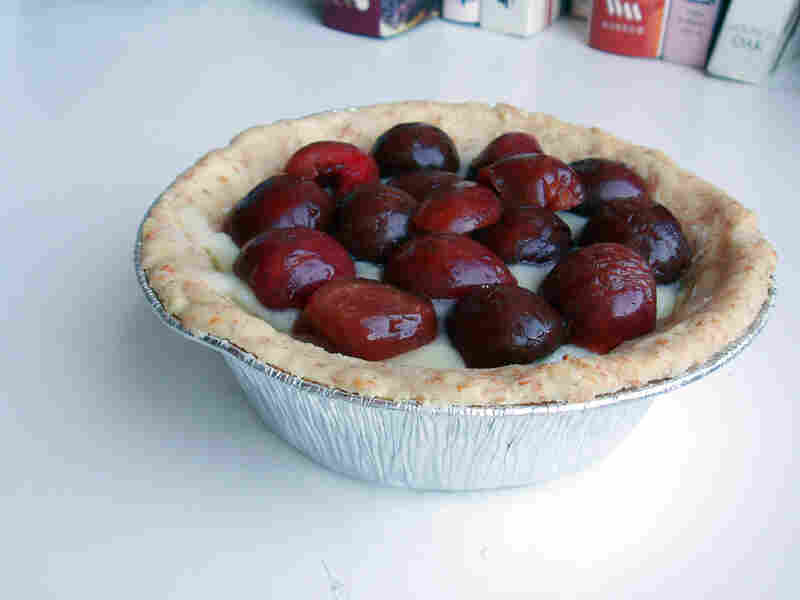 Divide the dough into 6 equal-sized balls. Flatten each with a well-floured rolling pin or the palm of your hand, and press into tart tins (4-inch diameter tart/quiche tins or 5-inch pot pie tins). Trim the edges with a knife and prick all over with a fork.

Blind bake the tart shells: Cover each with wax or parchment paper and weigh down with dried beans or pie weights. Bake for 10 to 12 minutes, or until the crusts are firmly baked and the edges appear light golden brown. Remove the tart shells from the oven and remove the paper and dried beans or pie weights. Return the shells to the oven and bake another 6 to 8 minutes, or until the bottoms of the crusts appear light golden brown. Remove from oven and allow to cool.

In a heat-proof bowl, whisk together sugar, flour, cornstarch, salt and eggs.

In a medium saucepan, bring milk to boil. Add the hot milk to the egg mixture gradually, whisking continually until mixture is smooth.

Pour the liquid back into the saucepan and return to heat. Bring it back to a boil. Continue to whisk; the mixture will thicken. As soon as you see the pastry cream boil in the center, remove it from the heat. Stir in the butter and almond extract.

Pour the pastry cream into the baked tart shells, place plastic wrap on the surface and refrigerate for at least 20 minutes. When ready to serve the tarts, remove the plastic wrap and top with halved maraschino cherries.

A luscious maraschino cherry compote transforms roast chicken into something special. Simmering the compote and sauce burns off most of the liquor, but the cherries retain a bold, full flavor. 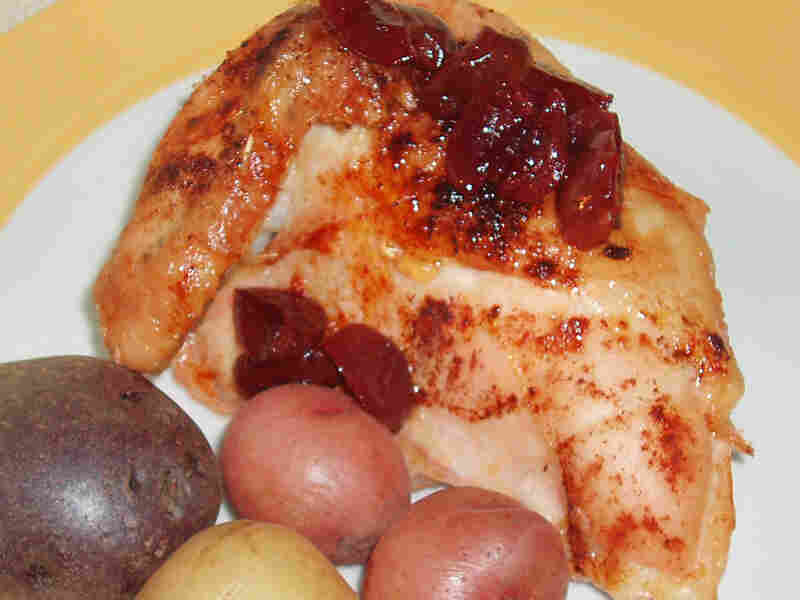 3- to 4-pound chicken, cut into quarters or eighths

In a small saute pan, stir together pomegranate juice and cherries over medium heat. Stir occasionally, allowing the juice to reduce by half (about 8 to 10 minutes). Add the butter, stirring to create a rich mixture. Season with salt and pepper and remove from heat. Spoon about a tablespoonful over each chicken piece and serve.