Accessibility links
That Not-So-Healthy Glow: The Dangers Of Tanning Evidence is mounting that too much indoor tanning increases the risk of skin cancer. Young women are the biggest users of tanning salons, and many cite peer pressure as a reason. And, researchers have found that many women who visit tanning salons show symptoms of addiction. 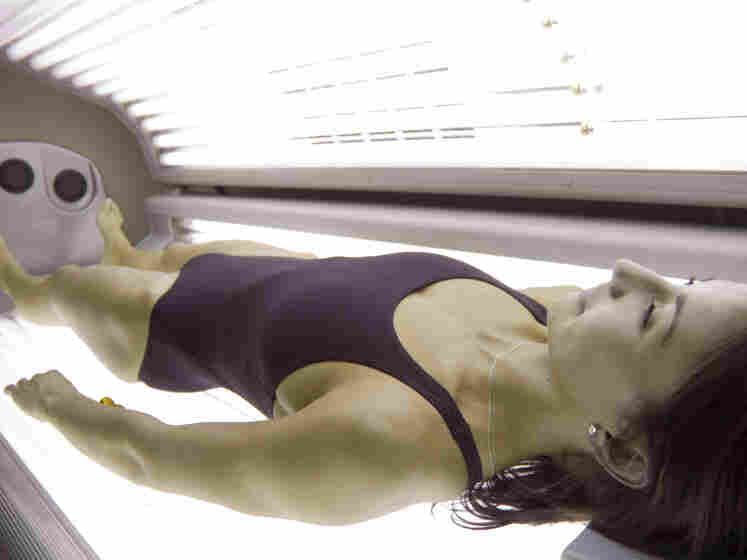 A recent study found melanoma risk increased as much as three times among people who tanned more than 50 hours in their lifetime, or had more than 100 sessions in a tanning booth. iStockphoto.com hide caption 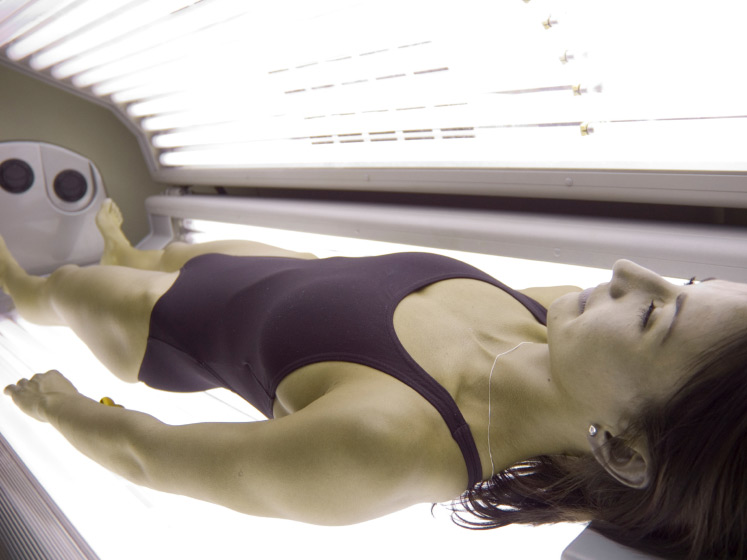 A recent study found melanoma risk increased as much as three times among people who tanned more than 50 hours in their lifetime, or had more than 100 sessions in a tanning booth.

iStockphoto.com
The FDA On Indoor Tanning And The Risks Of Ultraviolet Rays

But evidence is mounting that too much tanning increases the risk of skin cancer. There are more cases of skin cancer diagnosed today than ever before, with more than 1 million new cases every year. Ultraviolet rays from the sun and from tanning beds increase skin cancer risk.

Brittany Cicala of Chesapeake Beach, Md., began tanning right before the prom, when she was 17. All her friends were going to tanning salons, she says, and she really wanted to look "tan and healthy" in her white lace dress.

With her pale skin, blond hair and blue eyes, Cicala was used to wearing sunscreen. But when it came to indoor tanning, she didn't consider the risk of skin cancer.

Looking back now, Cicala says, she just didn't know when to stop tanning. In retrospect, she says, she looked entirely too tan, almost abnormal for somebody with her coloring. Nonetheless, she kept tanning, sometimes every day of the week for 20 to 25 minutes each time.

Today, Cicala describes herself as a "tanorexic" because, like individuals with eating disorders, she didn't see herself as she really was. She was very dark, almost "purplish looking," she says. But she never thought she was dark enough.

Mosher found the majority answered yes to one or more of these questions, which get at addictive behavior. The same students, she says, also reported symptoms of anxiety.

In Cicala's case, the last thing on her mind was a problem that might result from tanning. Then in the summer of 2004, her mother noticed a mole on her back. It was about the size of a nickel.

Cicala didn't think much about the mole. Then, it started to bleed. She was diagnosed with melanoma, the most aggressive and dangerous form of skin cancer. Since that first mole was removed six years ago, Cicala has had 34 surgeries to remove suspicious moles.

Dr. Robin Hornung is a pediatric dermatologist in Washington state, who says rates of melanoma are growing fastest among younger women. She says many experts are suspicious of indoor tanning.

Many teens may think they have a healthy glow, but really, Hornung says, their body is simply reacting to injury. She notes that a tan is really the skin's response to ultraviolet light damage, which causes DNA mutations.

A recent study from the University of Minnesota found melanoma risk increased as much as three times among people who tanned more than 50 hours in their lifetime, or had more than 100 sessions in a tanning booth.

Concerns about cancer have led the Food and Drug Administration, which regulates the tanning industry, to consider more strict regulation.

Sharon Miller of the FDA says the agency intends to strengthen warning labels on the tanning beds themselves, and will consider requiring a parent's approval before a child under 18 years of age can go to a tanning bed. The agency is also considering a total ban for those under 18.

The World Health Organization recently classified tanning beds as carcinogenic and recommended such a ban for those 18 and under. A number of countries have put such bans into place.

But John Overstreet, with the Indoor Tanning Association, says bans are intrusive and represent over-regulation. He says the industry has changed over the past few decades and is attentive to FDA recommendations about how long tanners should stay inside a tanning bed.

Meanwhile, cancer survivor Brittany Cicala has made skin cancer awareness her mission. She's testified about tanning and cancer risk at FDA hearings and at medical conferences. But by far, the most important work Cicala says she does is travel to high schools, where she tells young girls her story about indoor tanning and skin cancer.