Accessibility links
Movie Review - 'Ondine' - Melancholy and Slow Magic, Down By The Shore The lives of a gloomy fisherman and his young daughter are shaken up when a mysterious, aquatically inclined woman suddenly appears in their small Irish town. Colin Farrell and Stephen Rea star in a film that's a fine return to form for director Neil Jordan. (Recommended)

Melancholy And Slow Magic, Down By The Shore

Melancholy And Slow Magic, Down By The Shore 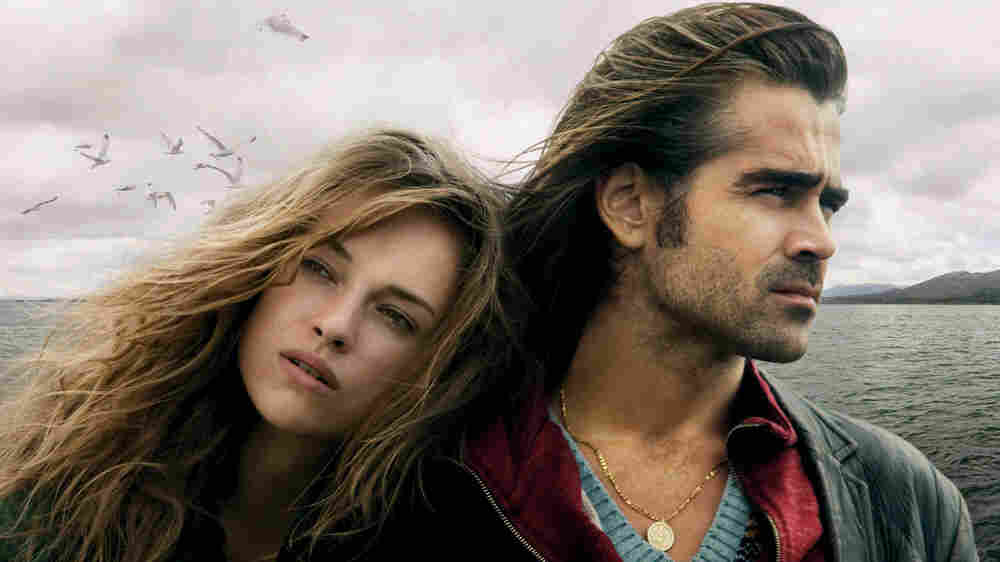 Beyond The Sea: A broody fisherman (Colin Farrell) finds his interest piqued by the mysterious, aquatically inclined Ondine (Alicja Bachleda) after accidentally snaring her in his nets. Magnolia Pictures hide caption

Rated PG-13 for some violence, sensuality and brief strong language

Fantasy is never just escape in the films of Irish writer-director Neil Jordan. It enlarges, rises above, dips way below reality and redeems the sorrowful life -- or, in the words of one smart, plucky and imaginative little girl in Jordan’s new movie Ondine, "the world we have to live in."

That world is plenty fraught for Annie (a cheekily assured Alison Barry), whose compromised liver forces her to get about in a wheelchair. Her alcoholic mother (Dervla Kirwan) lives with a similarly sodden boyfriend, but she vehemently withholds joint custody from Annie's father, Syracuse (Colin Farrell), a fisherman and former lush himself who stopped drinking to care for the daughter he adores.

In every other respect, Syracuse lives in a well of self-imposed loneliness. Delectable even when hidden beneath a woolly cap, lank hair and a depressive's mumble, Farrell brings to Syracuse the bad-little-boy-lost vulnerability that has endeared the actor to women of all ages. 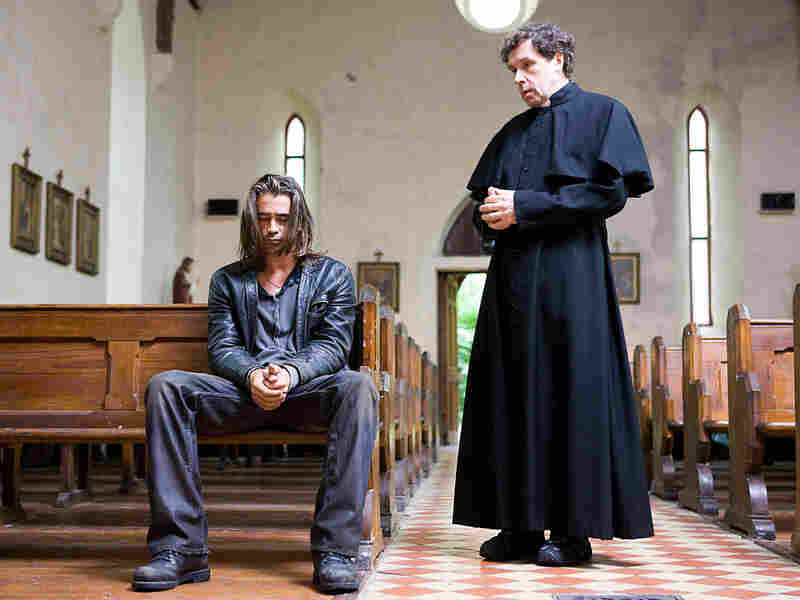 Father Figure: At his wits' end, Farrell's character turns for advice to a priest (Stephen Rea) who has himself all but lost his moorings. Magnolia Pictures hide caption 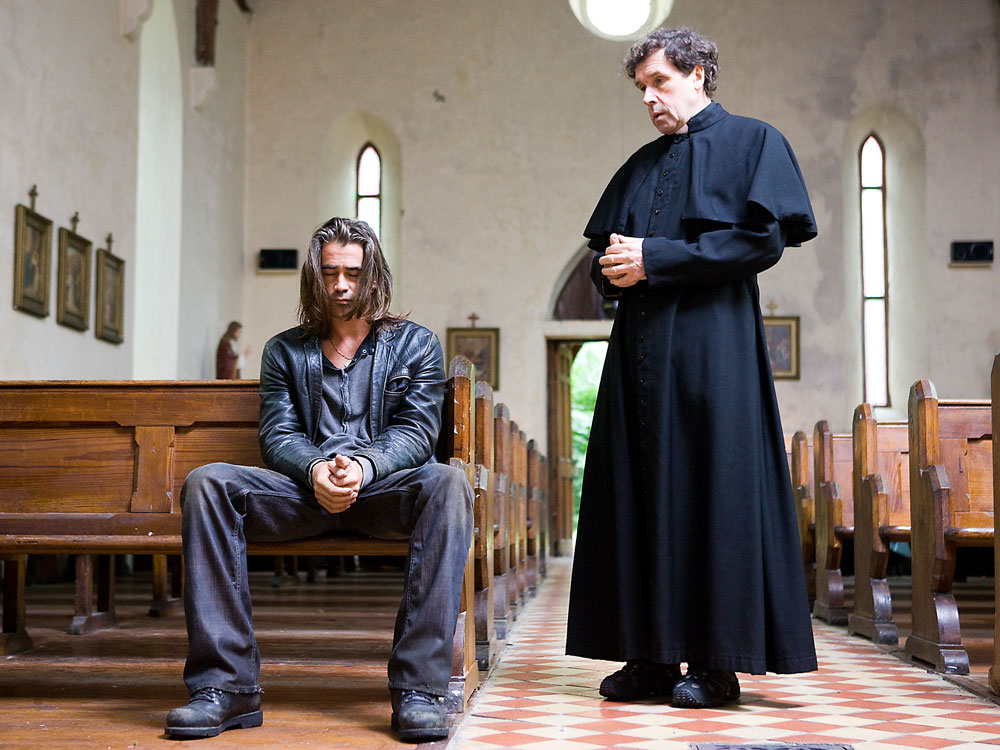 Father Figure: At his wits' end, Farrell's character turns for advice to a priest (Stephen Rea) who has himself all but lost his moorings.

Where Syracuse has all but given up on life, his daughter, like all quality kids who worship at the altar of Lewis Carroll, brings to her dreary reality a cheerfully instinctive acceptance of the hazy boundaries between the everyday and the magical. So when a lithe maiden with a funny accent pitches up in Syracuse's otherwise empty fishing net, coughing seawater, Annie recognizes her at once as the selkie of Irish legend. A hybrid creature well known to fans of John Sayles' lovely 1994 movie The Secret of Roan Inish, the selkie sheds her seal coat to venture ashore. There, willy-nilly, she ratchets up the drama in a glum community that doesn't exactly put out the welcome mat for uninvited guests, let alone ones who go braless and dripping with erotic promise.

Seducing an abundance of fish into Syracuse's nets with songs of longing and desire, Ondine (played by Polish actress Alicja Bachleda, who has a son with Farrell) restores to the fisherman the luck and libido that have long gone missing in his life. But she also brings trouble in spades, including a car crash, a potential drowning and a tall, dark stranger with thin lips and a tendency to lurk. Who is he? And, for that matter, who is Ondine -- no happy camper herself, for all her apparently supernatural powers of healing?

Jordan made Ondine on the fly when a planned studio project was stalled by the Hollywood writers' strike in 2007. The delay may bear out those claims about the luck of the Irish, for the director has done his best work close to home and with a manageable budget. No Hollywood picture he has ever made, including the ponderous Anne Rice adaptation Interview with the Vampire and the biopic Michael Collins (whose only magic lay in its retooling of a vicious IRA thug into a hero of resistance), has ever come close to the vibrant romanticism or the alluringly ambiguous sexuality of his small films (Mona Lisa and the huge hit The Crying Game) or to the muscular intelligence of The Butcher Boy -- or to the risky incandescence of his best and least ballyhooed film, The Miracle, which plays dangerously with the boundaries of motherhood and incest.

Ondine is not Jordan's best work by any means, but it's a happy return to form after the dreadful 2007 Jodie Foster vehicle The Brave One. Gorgeously filmed by the legendary cinematographer Christopher Doyle (a wizard with underwater cameras and natural light) in and around the working fishing town where the director lives, Ondine plumbs the country's most resonant fairy tale and plays impishly along the borders of postcard fantasies of Ireland. Reality bites here too, though: The misty streets and choppy seas of this fishing village, becalmed by an obsolete economy, are glimpsed through a boozy blue-green haze or through the rheumy eyes of a disenchanted local priest (Stephen Rea, underplaying madly as usual) who's grown as lonely as the Maytag man since his parishioners abandoned the confessional for the 12-step meeting.

No one gets to play God in this intensely secular yet deeply spiritual tale of ruin and redemption. Yet it's the priest who ends up as a practical savior -- who believes we must save ourselves. "Misery is easy," he tells Syracuse at his lowest ebb. "It’s happiness you have to work at."

Like Annie, the good father clings to a belief in humanity in all its bedraggled limitations, in the importance of facing up to truths both real and fantastic, and in the power of love to heal the most wounded soul. (Recommended)