Accessibility links
Japan's Prime Minister Steps Down Over Okinawa Marine Base Row Yukio Hatoyama said he is stepping down over his broken campaign promise to move a U.S. Marine base off the southern island of Okinawa. His approval ratings have plummeted over the bungling, reinforcing his public image as an indecisive leader after only eight months in office. 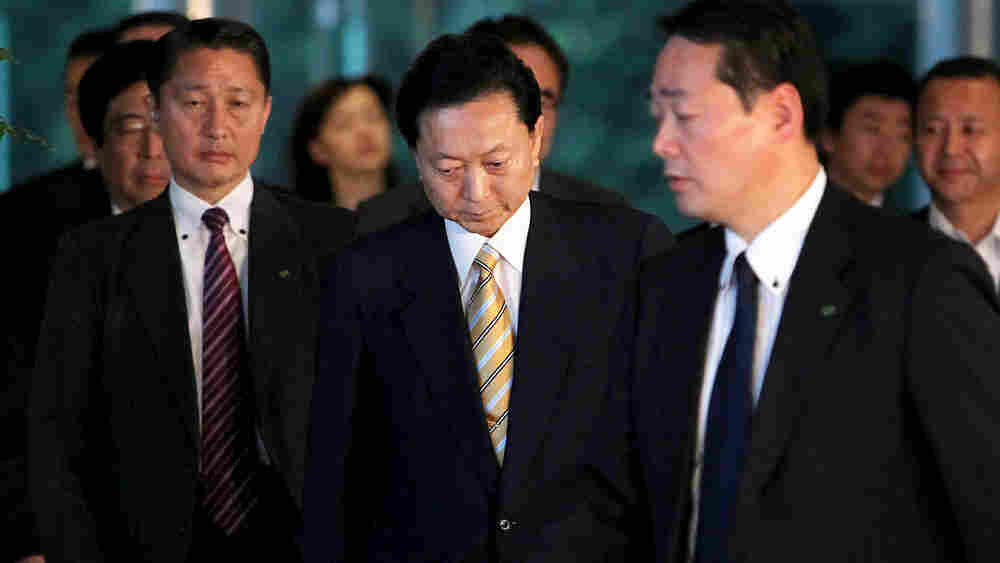 Japanese Prime Minister Yukio Hatoyama (center) leaves his official residence in Tokyo on Wednesday after announcing to the media that he is resigning. Kiyoshi Ota/Getty Images hide caption 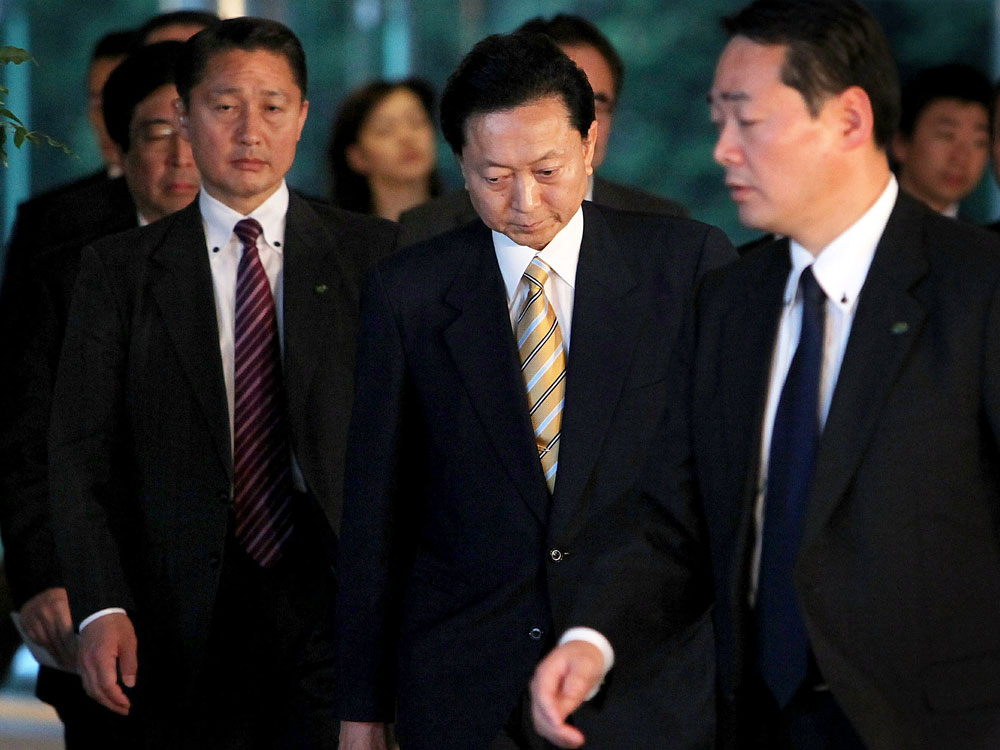 Japanese Prime Minister Yukio Hatoyama (center) leaves his official residence in Tokyo on Wednesday after announcing to the media that he is resigning.

Embattled Japanese Prime Minister Yukio Hatoyama resigned Wednesday to improve his party's chances in an election next month, after his popularity plunged over his broken campaign promise to move a U.S. Marine base.

Finance Minister Naoto Kan, who has a clean and defiant image, emerged as a likely successor. He signaled that he intends to run for leadership of the ruling Democratic Party of Japan at a party meeting to be held Friday.

Sweeping into office just eight months ago by defeating the long-ruling conservatives, Hatoyama captured the imagination of many Japanese voters with his promises to bring change and transparency to government, as the country grappled with economic stagnation and an aging, shrinking population. Those promises were enshrined in a slick platform known as The Manifesto.

But he set a record for squandered political capital. Disillusionment quickly set in as Hatoyama, who took office with a whopping 70 percent support rate, was forced to break one campaign promise after another. Hatoyama's Waterloo was on the southern island of Okinawa. Perennially frustrated by noise, pollution and crime problems with U.S. military installations, but ignored by generations of conservative governments in Tokyo, Okinawans were energized by Hatoyama's pledges to move the Marine Air Station Futenma off their island. When Hatoyama announced, after months of delay, that this promise would also be broken, it was the last straw for voters. As his support tumbled to below 20 percent, his party members began to panic.

"He could not live up to the huge expectations," said Tetsuro Kato, professor of politics at Hitotsubashi University in Tokyo. "He just proved himself to be a rich kid without experience and leadership skills.

He could not live up to the huge expectations. He just proved himself to be a rich kid without experience and leadership skills.

Tetsuro Kato, professor of politics at Hitotsubashi University in Tokyo

"The expectations were so great, the disappointment was also great," he added.

Hatoyama, a professor-like millionaire with a Ph.D. in engineering from Stanford University, is the fourth Japanese prime minister to resign in four years. Viewed as somewhat aloof and eccentric by the Japanese public, he earned the nickname "alien." He was even pilloried for his fashion sense, particularly a hideous multicolored checkered shirt he wore to a barbecue in May. The shirt looks like it's from the '80s or '90s, one Japanese critic spluttered, and his ideas and philosophy are equally old.

In recent days, he faced growing calls from within his own party to quit or imperil its chances in upper-house elections likely to be held sometime in July. Hatoyama, the grandson of a prime minister, acknowledged in a news conference broadcast nationwide that he had disappointed the country with his handling of the Futenma issue, as well as the funding scandal.

"I was taking up many important efforts to make people's lives better. It is extremely sad that no one is listening to me anymore," a teary Hatoyama said at a news conference. "That is all due to my own failings."

The DPJ's powerful No. 2, Secretary General Ichiro Ozawa, seen by many as a "shadow shogun," also resigned.

The party will meet Friday to choose a new chief, who will almost certainly become the next prime minister because the Democratic Party of Japan controls a majority in the more powerful lower house of parliament. 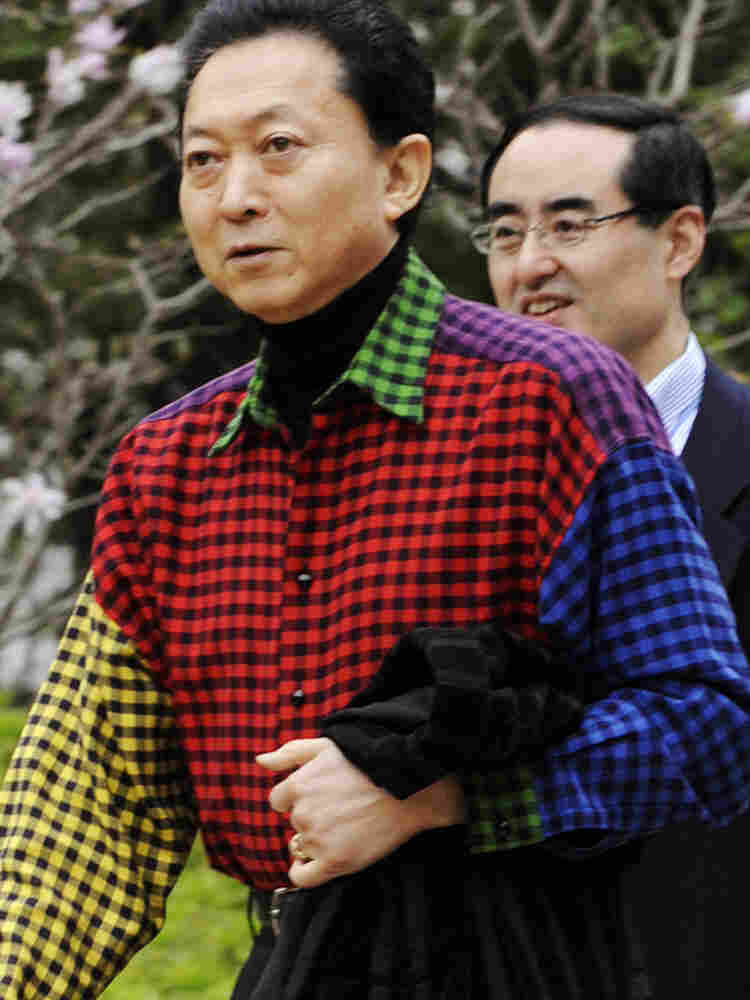 By the end, Hatoyama could do nothing right. Critics mocked his sartorial choices, along with his policies. One particular target was this shirt, which he wore to a barbecue in May. hide caption

Among the strong contenders as Hatoyama's replacement is Kan, 63, a former health minister, who has been popular with voters after exposing a government cover-up of HIV-tainted blood products that caused thousands of hemophilia patients to contract the virus that causes AIDS. He has a reputation for speaking his mind and sometimes being hot-tempered.

Foreign Minister Katsuya Okada, seen as mild and levelheaded, is another possible candidate. But his involvement in discussions over the Futenma base issue might be viewed as a negative by voters.

Even after the prime minister's seat is filled, Japan's leadership crisis is likely to linger on. National parliamentary elections will be held in July, and for many Japanese, Hatoyama's fall has tainted every member of his party.

"Hatoyama has brought into question the competence of the entire party," one TV commentator said. "It will be hard for the Democrats to regain public trust."

The slick-haired, soft-spoken Hatoyama, who grew up in a well-to-do family of politicians, may have grown too out of touch with everyday people and their economic hardships.

"I was very disappointed," said Masahiro Ueda, 38, who works for a software company, of Hatoyama's failure to deliver. "I thought he could change things, but in the end the issue just went back to square one."

Hatoyama's dramatic rise and fall has also thrown the U.S. base issue -- and Japan's security relationship with the U.S. -- into limbo. The Pentagon is demanding that Japan adhere to a 2006 base agreement to keep the Futenma air base on Okinawa, while Okinawans are just as adamant that the base be moved somewhere else in Japan. However inept Hatoyama's performance as prime minister, many observers say his administration was needlessly undercut by Washington. They criticize the U.S. for taking a hard line with Japan, a country that recently celebrated a 50-year security alliance with the U.S., and which hosts the largest American military base in Asia.

Japanese politics tend to be unpredictable, and it is still unclear who will be picked in the jockeying of power among blocs of lawmakers in the Democratic Party. The pick will be Japan's next prime minister, because the Democrats have the majority in the lower house that chooses this nation's chief.

Half the seats in the 242-member upper house will be up for election. The DPJ and its Peoples New Party coalition partner together have 122 seats, with 56 up for grabs in July. The DPJ and its partner can lose a majority in the chamber and still remain in power because they control the more powerful lower house. But it will make it more difficult for them to pass key legislation.

Hiroshi Kawahara, political science professor at Waseda University, said Kan may emerge the safe choice because of his clean image — although he is probably unable to save the party from defeat in July's elections.

"We cannot let Hatoyama lead Japan," he said. "His words and actions always kept changing, and I don't trust him anymore."

NPR's Louisa Lim and Lucy Craft, reporting for NPR from Tokyo, contributed to this story.