Accessibility links
Corruption Trial To Start For Ex-Ill. Gov. Blagojevich Jury selection begins Thursday in the corruption trial of former Illinois Gov. Rod Blagojevich. He is charged with scheming to use his office to enrich himself. Blagojevich has used much of the last 18 months to proclaim his innocence. 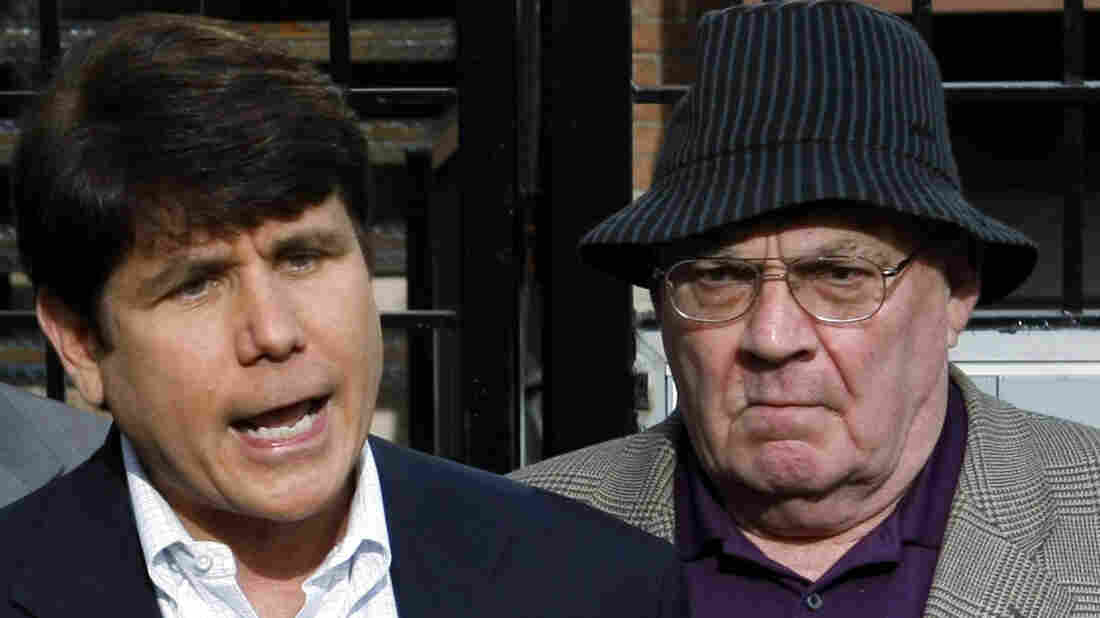 "If anyone wants to tape my conversations, go right ahead; feel free to do it."

It turns out, federal authorities already were recording Blagojevich's conversations. Before dawn the next morning, FBI agents woke up Blagojevich and led him out of his Chicago home in handcuffs.

"Gov. Blagojevich has been arrested in the middle of what we can only describe as a political corruption crime spree," said U.S. Attorney Patrick Fitzgerald, at a news conference announcing the governor's arrest. "We acted to stop that crime spree."

He has pleaded not guilty and almost since the day of his arrest, he's been proclaiming his innocence to anyone who will listen. He's made the rounds of TV and radio talk shows and even reality TV, saying he can't wait to fight the charges in court.

The impeached and ousted former Democratic governor is charged with scheming to use his office to enrich himself and a handful of close friends and advisors.

In announcing the charges, Fitzgerald laid out scheme after scheme in which Blagojevich allegedly used the powers of his office for personal gain or to extract hefty campaign contributions.

"The most cynical behavior in all of this, the most appalling, is the fact that Gov. Blagojevich tried to sell the appointment to the Senate seat vacated by President-elect Obama," Fitzgerald said. The conduct would make Lincoln roll over in his grave."

Federal wiretaps approved in late October of 2008 recorded Blagojevich allegedly scheming to sell the Senate seat to the highest bidder, trying to leverage his power to appoint Obama's successor into a cabinet-level appointment for himself, other lucrative jobs for either himself or his wife or $500,000 in campaign funds.

In one tape recorded conversation a month before his arrest, Blagojevich is heard saying, "I want to make some money." At another point, he crassly states, "I've got this thing and it's (bleeping) golden. I'm just not giving it up for (bleeping) nothing."

To prosecutors, the defendant's voice played to a jury making those kinds of comments, may just be 'bleeping' golden.

"Tape recordings are powerful evidence," says Ron Safer, a former federal prosecutor, who is now a prominent white collar criminal defense lawyer. "The jury has come to expect that kind of evidence. In this case, they're going to get it."

Prosecutors say they have 500 hours of recorded conversations involving Blagojevich and some of his closest aides, and his brother, Robert, who headed Blagojevich's campaign fund.

Robert Blagojevich also is charged in the case and will stand trial alongside the former governor.

The tapes allegedly expose schemes involving not just the Senate seat, but also attempts to extort big campaign contributions from a highway contractor, the owner of a horse racing track and an executive of a children's hospital.

The federal wiretaps only recorded Blagojevich's conversations less than two months before he was arrested. The indictment alleges corrupt activity dating back six years.

"One of the things that is truly unique about this case is the breadth of the alleged corruption," Safer said. "It is literally breathtaking."

Prosecutors say Blagojevich and some of his closest friends and advisors began plotting to use the position to enrich themselves and raise unprecedented loads of campaign cash, even before he took office in 2003.

Three former top aides have pleaded guilty and will testify against him.

Other Blagojevich insiders may testify, too, including convicted fundraiser Tony Rezko. They are expected to testify about schemes to use the governor's powers over state boards, jobs, contracts and investments.

"This was allegedly pay to play on ultra steroids, says Andy Shaw, executive director of the Better Government Association. "Everything was for sale, this was government for sale."

"If the government's case is true, this was the most cynical, hypocritical, disingenuous, approach to government in the history of Illinois and maybe most other states."

Shaw says that's because Blagojevich was elected as a reformer, promising to clean up state government as his predecessor Republican George Ryan weathered a political corruption scandal that landed him in federal prison. Ryan is serving a six and a half year sentence.

So how does one defend against such evidence?

"The defense will be 'look, politicians do things for their own benefit; for their political benefit'," attorney Safer says.

Blagojevich and his defense team, which include the father and son team of Chicago defense attorneys Sam Adam and Sam Adam, Jr., have indicated they will pursue such a defense. They will argue what is alleged as criminal behavior is really just political horse-trading.

What kind of conspiracy was it, Adam, Jr. asked, "When no money went into Blagojevich's pocket. Not one dime. He was broke."

But while most criminal defendants invoke their right to remain silent, Blagojevich has been anything but. He has logged close to 100 media interviews, written a book, appeared as an Elvis impersonator, hosted a talk radio show and was a contestant on Donald Trump's Celebrity Apprentice.

Blagojevich maintains he's done nothing wrong and that he is a victim of a persecution, not a prosecution. He claims he's been targeted because he is fighting for common people against entrenched political interests.

In the process, he's become both a late night punch line and an even bigger celebrity than he ever was as governor.

"They are cowards and they are liars," Blagojevich angrily declared in April, when prosecutors filed documents linking his wife Patty to the alleged corruption.

At the same time, he ripped into the U.S. Attorney's office for opposing his effort to play for the jury every minute of those 500 hours of secretly recorded conversations.

"The reason they won't play all those tapes," Blagojevich says, "Is they're covering up that big lie that foreseeably led to a chain of events that stole a governor from the people of Illinois and undid the will of the people."

Blagojevich says he wants to take the stand in his own defense, in a trial that could last all summer.