Accessibility links
Book Review: 'Old Men In Love' By Alasdair Gray — Sex, Scotland And Socrates In 'Old Men In Love' Alasdair Gray's latest novel is a hodgepodge of older material — reworked from newspaper articles, discarded stories and plays. It swings widely through time and space to portray the vulnerabilities of men in power, yet it ultimately holds together as funny, profane, cohesive fiction.

Sex, Scotland And Socrates In 'Old Men In Love'

Sex, Scotland And Socrates In 'Old Men In Love' 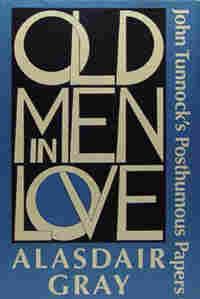 Scottish schoolmaster John Tunnock could not finish writing a book. He'd begin a manuscript on the trial of Socrates, only to become frustrated with details and get distracted with an idea he had about the Italian Renaissance. At the time of his death in 2007, at age 67 (foul play is suspected), he had a handful of such half-finished manuscripts about topics ranging from ancient Athens to 2003 Glasgow, along with a few diaries, and reminisces of his childhood after his mother was killed in the London Blitz. His heir Lady Sara Sim-Jaeger sought to find a suitable home for them. They have no real publishing value on their own, she thought, but perhaps a writer like Alasdair Gray, "who clearly has a high opinion of his own talents," could bring some form to the miscellanea and cobble it into a manuscript.

Like the best of Gray's work, Old Men in Love is funny and profane, but with a shuddering anger to the politics. Despite its swinging widely through time and space to portray men in power, their vulnerabilities and the perils of unchecked desire, perhaps the novel's best section is its most mundane and personal: Gray's portrayal of John Tunnock as a young boy trying to find his (lonely) place in working-class Glasgow. With a dead mother and a father he never knew, he's left to two plucky maiden aunts. His coming of age includes sherry, comic book superheroines in very tight costumes, his discovery of pornography and being discovered with pornography by his schoolmaster. 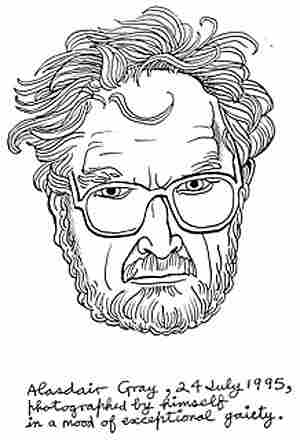 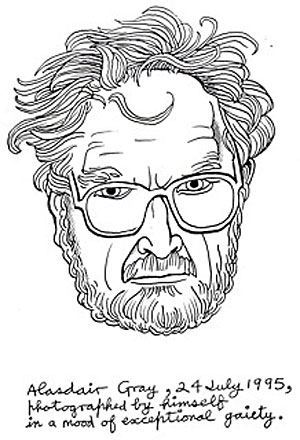 Self-Portrait: "Alasdair Gray, 24 July 1995, photographed by himself in a mood of exceptional gaiety."

Tunnock does not exist, of course. The lines between the real and fictional, human beings and characters, have always been a little blurry in Gray's work. In his 1981 debut novel Lanark, he created fictional literary critic Sidney Workman to limn that book's and Gray's failings and disappointments. Workman reappears at the end of Old Men in Love, insisting that he's not a fictional creation (he is) and reasserting his belief that Gray is a middling talent. Fantastical Gray works like Lanark and 1982, Janine (1984) include baldly autobiographical passages hidden behind the dragons and S&M role playing.

Gray is telling the truth about one thing: Old Men in Love is a hodgepodge of older material, "a collection of scraps from a tired writer's bottom drawer," as Workman puts it. But it's Gray's bottom drawer we're scraping, not Tunnock's. Some bits are reworked from newspaper articles, others from discarded stories and plays. The surprising thing is that it holds together as a cohesive novel. This may be the dregs, but with a writer like Alasdair Gray, it's worth the trip all the way to the bottom.

One boy in my class was as friendless as myself. His clothing indicated a poorer home than most of us. His face was pitted by acne scars and his movements were awkward and jerky, maybe from an early attack of infantile paralysis. There was a rumour that he should have gone to the Junior Secondary School, but had only passed the qualifying exam to the Senior Secondary because the examiners pitied him. Unlike me, who was mocked, Stewart Doig (nicknamed Stoory Doig) was simply avoided. Nobody sat beside him in class if there was an empty seat elsewhere. When there was not I had to sit beside him, at which times he would try to start conversations which I discouraged, because like most outcasts who long to be accepted by a majority I disliked others in my situation. When I said this boy was my school friend Nell and Nan, who often spoke simultaneously, cried, "Bring him home to tea!"

I hid my horror of the idea by saying sadly, "Impossible. He has a widowed mother who keeps him on a very short leash. She frets a lot if he doesn't eat with her -- she's a bit of an invalid who has very little company -- and he's a very devoted son."

Nell cried, "O poor woman!" and Nan, "And poor boy! We must do something to help. Perhaps we should visit them?" "No," I said, shaking my head, "His mother may be poor but she's very proud and would hate anything like condescension.”

"No, but he talks a lot about her, and that’s the impression I get."

This sounded inconclusive and unconvincing so I added, "I've been invited to their house for a meal once or twice, but honestly, I prefer eating with you."

"But you must go!" they cried and, "The poor woman will be glad to see her son has got at least one good friend," said Nell, and Nan said, "It will be a rare social occasion for her. I will bake a cake for them and you must also take a bunch of flowers."

This conversation left me astonished by the ready stream of lies I had smoothly told, but depressed by the consequences. From now on my aunts wanted reports about Doig and his mother, who really was a widow but not (as far as I knew) an invalid. Nell and Nan were so pleased with this fiction of my new friend that I had no heart to destroy it by telling the truth or inventing a quarrel with Stoory that would make reconciliation impossible. A time came when I could not postpone a visit to his home so set off one Saturday after lunch with a bouquet of chrysanthemums in one hand, in the other the briefcase containing a bottle of dry sherry and rich dark fruit cake in a cardboard box. When out of sight of the house I turned north instead of south, went quickly through Botanic Gardens to the Ha’penny Bridge, chucked the flowers into the river as I crossed and then turned upstream along a path that is now the start of the West Highland Walkway. It was a grey day and thin rain began to fall. I passed the great weir serving the west bank paper mill and under an arch of Kelvingrove Aqueduct sat down on a lump of rubble and took out cake-box and bottle. Even on bright summer days this is a dank, dreary place but few folk pass that way and that Saturday it suited my mood. I opened the box, broke off handfuls of cake and stolidly ate them between swigs from the neck of the bottle. My previous experiences of alcohol had been small glasses of hot toddy brought to me in bed with an aspirin pill when a cold looked like coming on. I had never before drunk at one sitting a whole bottle of anything. As the sherry went down my gloom gave way to foolish, light-headed cheer. I flung the bottle away, stood up and everything seemed spinning and tilting round me. By an effort of will I stopped that happening, which added a sensation of power to my strange cheerfulness. Leaving most of the cake for birds and rodents I strode up to the Maryhill Road and along the busy pavement, amazed that nobody seemed to see how drunk I was. Either my self control was super-human or other folk had also secretly drunk too much and were too busy disguising the fact to notice my condition. This last explanation seemed most probable and enhanced my sense of total freedom. 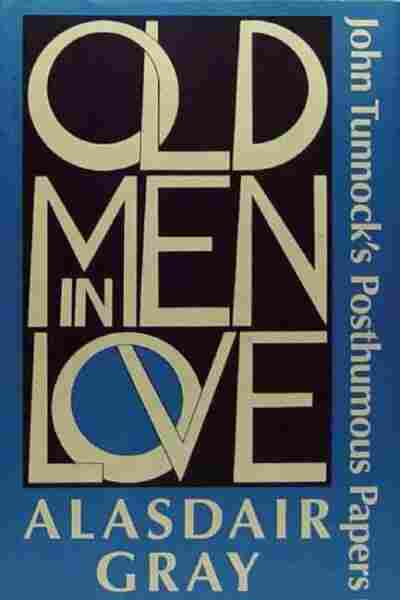 by Alasdair Gray and Sara Sim-Jaegar