Accessibility links
A 'Crude' Awakening: Chevron Vs. The Documentarian In 2009, filmmaker Joe Berlinger released Crude, a documentary that followed key players in a multibillion-dollar class-action lawsuit against the oil giant. Now, Berlinger is fighting his own battle against Chevron's lawyers -- who think his raw tapes will help them prove their case. 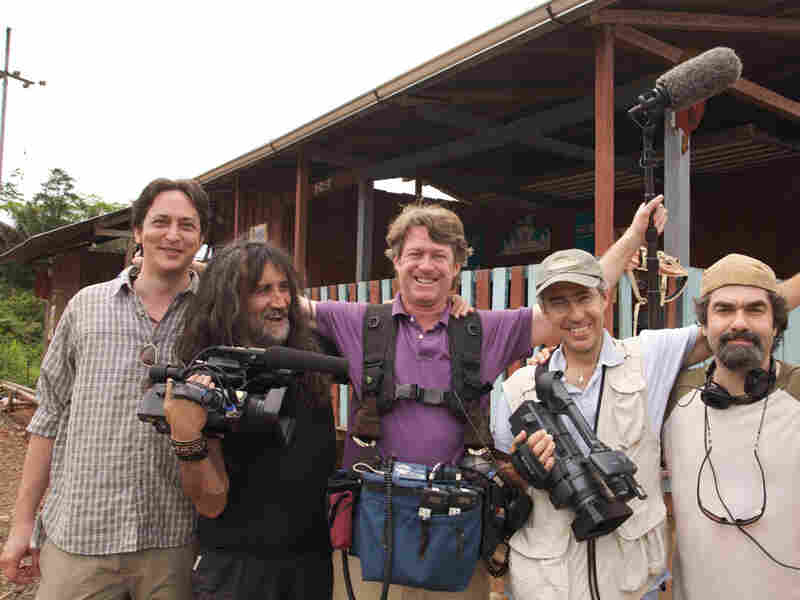 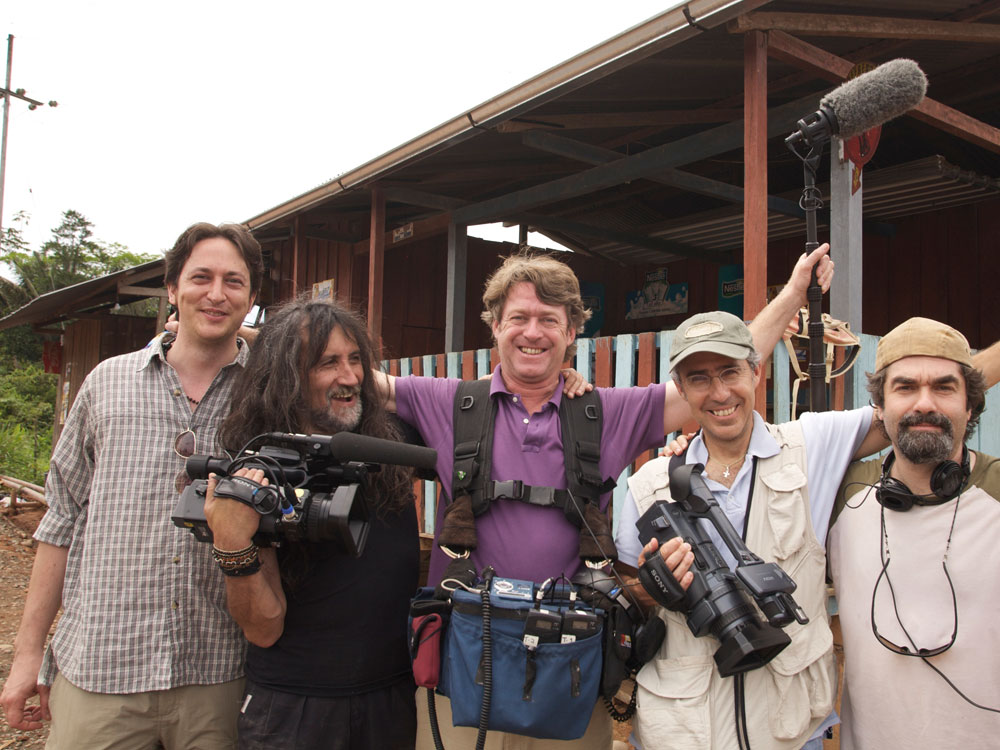 Now Berlinger is fighting his own battle against Chevron's lawyers.

The director had obtained an astonishing amount of access to the private strategy sessions of the lawyers suing Chevron. But at the oil company's request, U.S. Judge Lewis Kaplan has ordered Berlinger to turn over all 600 hours of footage he shot for the film.

Chevron's lawyers argued that they needed the tape to help stop the Ecuadorian lawsuit and related criminal prosecutions. But Berlinger says that comes at too steep a cost -- the piercing of long-recognized journalistic privileges.

Stories on the Chevron lawsuit -- and the stories written about it.

"There's an expectation on the part of my subjects that the raw footage is not going to be released as though it's a 24/7 webcam on their lives," Berlinger tells NPR. He says there's an expectation that he'll "sit in an editing room and ... spend years to create an honest and accurate portrayal."

Berlinger is appealing Judge Kaplan's order and seeking to have it put aside while that appeal is considered. On behalf of a coalition of the nation's leading newspapers, network news divisions and documentary makers -- including The New York Times, NBC and HBO -- the noted First Amendment lawyer Floyd Abrams has filed a friend-of-the-court brief in support of Berlinger's stance. Abrams wrote that Kaplan's decision would wrongly wrest not only confidential but also unpublished material from a journalist's possession. The coalition says that's an unparalleled demand.

Top Chevron lawyer Randy Mastro doesn't have much patience for that argument. 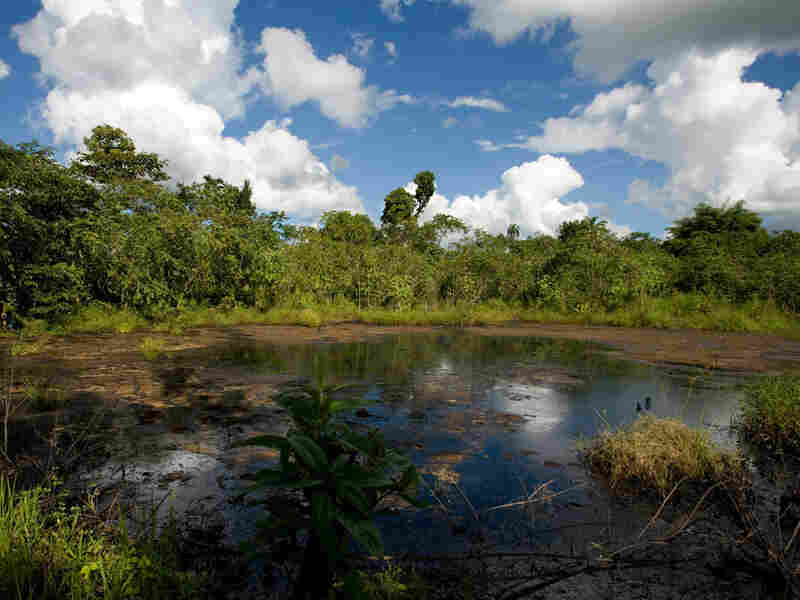 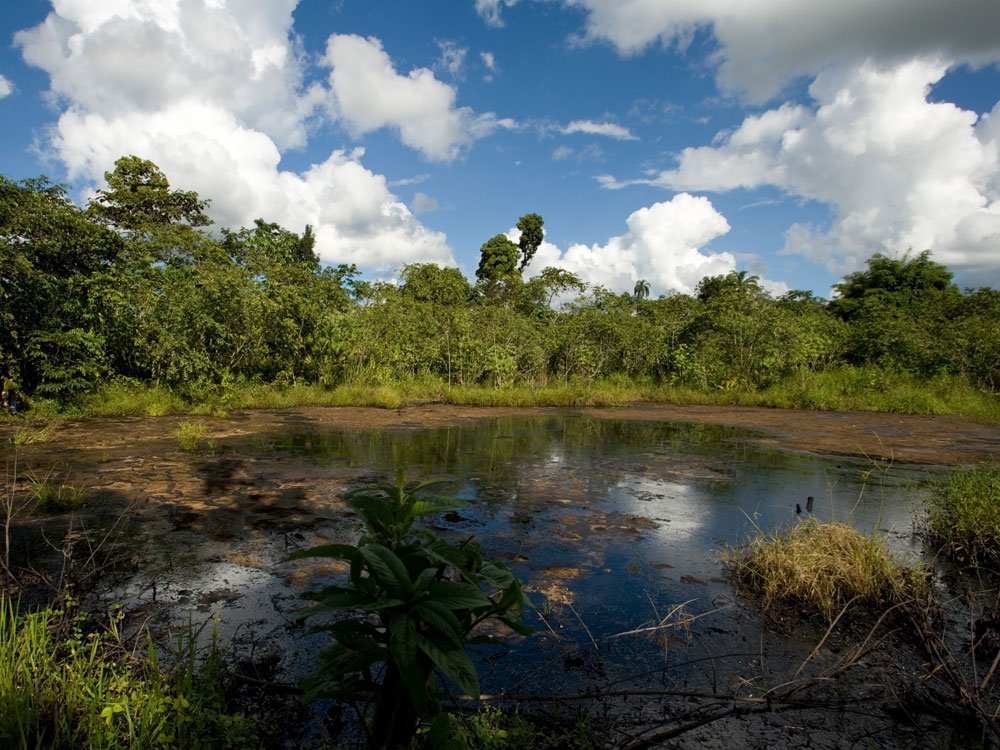 Oil Still: Among other scenes of environmental contamination, Berlinger's documentary shows a lake of oil fouling the Ecuadorian landscape.

The lead lawyer suing Chevron is the media-savvy Harvard-trained attorney Steven Donziger. And he did indeed try to convince Berlinger to make a documentary, just as he also successfully courted sympathetic stories from Vanity Fair magazine and 60 Minutes.

Initially, Berlinger says, he didn't want to do the film, but instead decided to fly down to Ecuador -- at his own expense -- to take a look at the Amazon. What he saw astounded him.

"I was just stunned at the level of devastation in this once pristine, very important part of the world in terms of our ecosystem," Berlinger says. "It was under assault."

The movie he eventually made features people telling of painful ailments and the deaths of loved ones. And it documents the lawsuit filed on behalf of 30,000 indigenous people. The suit alleges, among other things, that pipes from hundreds of oil pits were intentionally set up to drain a toxic soup into rivers, streams and other sources of drinking water. Chevron inherited the legal headache when it bought Texaco in 2001.

Chevron's legal team has created a multipronged defense. The company points to an earlier agreement with the Ecuadorean government that released the corporation from liability in exchange for remediation of polluted sites. It says there's no proof of any link between the sickness of indigenous people and Texaco's operations there. And it blames Texaco's former partner, the state agency PetroEcuador.

The lawyers suing Chevron argue that's all bunk -- that neither Texaco nor Chevron has lived up to its obligations.

Berlinger is clearly sympathetic to the condition and the cause of the local people supporting the lawsuit against Chevron. He says the company has a moral duty to pay for further cleanup and medical care there. But he says he doesn't know whose case has more legal merit.

Chevron has sought to cast doubt on the integrity of the court proceedings in Ecuador, and says the tapes will help show that Donziger and other lawyers suing the company have acted unethically. By this account, the company has been subject to political pressures in Ecuador from the president on down -- and indeed, Donziger is shown briefly glad-handing President Rafael Correa in Crude.

"This litigation in Ecuador has become a sham. It's a travesty of justice, and it's a shakedown," Mastro says. "It should cause any American to shudder at the notion of what passes for a judicial system in Ecuador."

In one scene in Crude, Donziger is shown pressuring a judge in the absence of Chevron's lawyers. Mastro says outtakes will likely show worse misconduct, as Berlinger has acknowledged he "tweaked" some scenes at the behest of Donziger and other people featured. Berlinger says he retained editorial control and that if there were anything that juicy, he would have used it in the film.

Donziger declined to be interviewed for this story, though he has said he was meeting with the judge to counter an earlier unethical maneuver carried out by Chevron's lawyers behind his back.

Chevron has argued it is the victim of a slick public relations campaign, abetted by celebrities such as the musician Sting, and a pliant press corps. And it has fought back on the media front, too. It commissioned former CNN correspondent Gene Randall to put together video reports that look an awful lot like news stories to tell the company's side. Those were posted just as 60 Minutes prepared its broadcast last spring. After the 60 Minutes story appeared, Chevron successfully appealed to the Columbia Journalism Review to examine the newsmagazine's piece with a critical eye.

The company also posted videos showing what it says is misconduct by a judge and experts in the case. Whenever people do Google searches for "Chevron" and "Ecuador," paid links to those sites appear at the top of the screen.

"There definitely is a filter out there," said Kent Robertson, a Chevron spokesman. "We have sought the opportunity to tell our story through multiple outlets."

One of the lawyers suing Chevron, Ilann Maazel, says Chevron is merely attempting to cloud the larger picture.

"We've had a litigation for over 17 years to try to hold Chevron to account for what it did," Maazel says. "This latest lawsuit it brought against Mr. Berlinger is just another way to delay and distract from this lawsuit and keep people focused on anything except the evidence of their own wrongdoing."

At a hearing scheduled for next Tuesday, Berlinger's lawyers will explain to a three-judge panel at a federal appellate court why they think the panel should issue a stay of Kaplan's ruling. Without that order, the filmmaker will have to start turning over those 600 hours of tapes.