Accessibility links
Sea Salt Latte: Is 85C The Next Coffee Craze? The coffee company from Taiwan hopes to teach Americans to love marbled taro and iced sea salt lattes. Each store in the 85C chain also includes a bakery. A crossover hit is black squid-ink bread, made with Vermont sharp cheddar cheese and garlic paste. 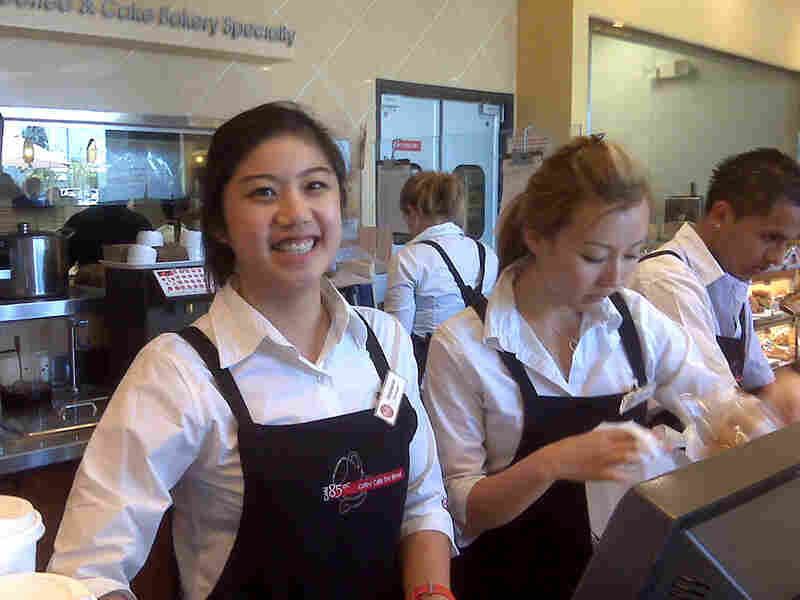 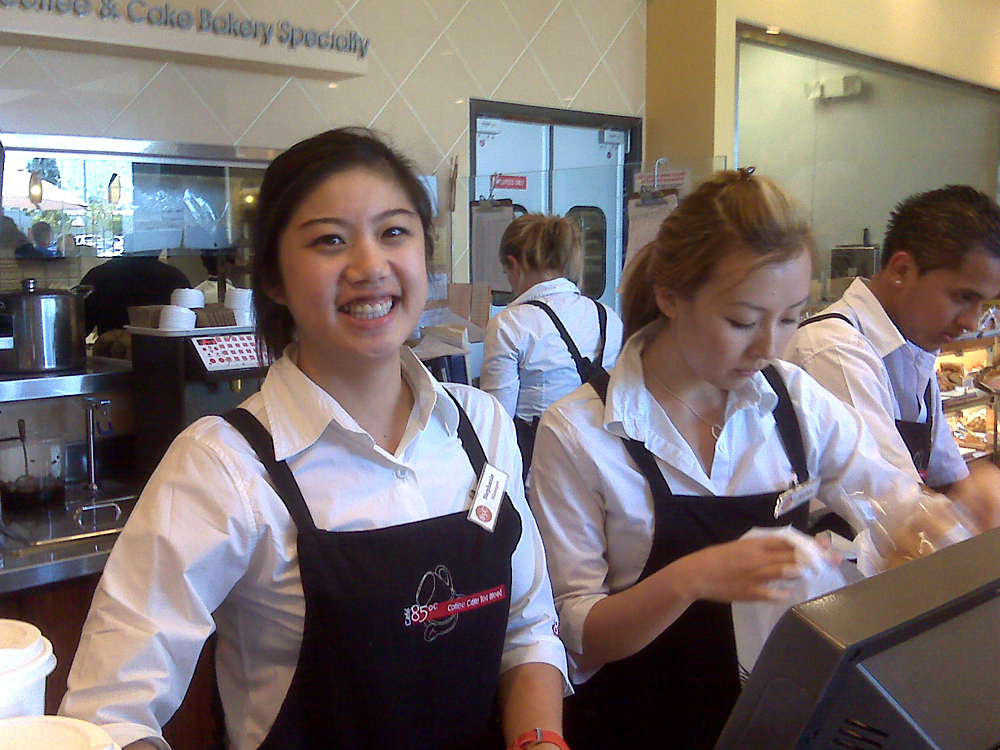 Manager Stephanie Peng says of the American version of 85C coffee, "We made it a little sweeter here, a little saltier here -- more flavor actually."

A coffee company from Taiwan hopes to teach Americans to love squid-ink buns and iced sea salt lattes. Stores in the 85C chain also sell cheap, and unusual, pastries. Just as Starbucks brought venti triple lattes to Main Street, U.S.A., 85C hopes that adding a little saltiness to the caffeine is a hit with American consumers.

"It's really unique," says Stephanie Peng, manager of the company's flagship U.S. store in Irvine, Calif. "The sea salt's in the cream, the foam part, so it just brings out more coffee essence."

The lattes sound exotic, but the salt flavor is incredibly subtle -- you have to tease it out with your tongue. Sea salt lattes have helped establish 85C as the "Starbucks of Asia." The chain has more than 300 stores across Taiwan, and it plans to expand its presence across China, Australia and the U.S. over the next few years.

Key to the company's U.S. outreach is Peng, 24, a Taiwanese-American who grew up in Orange County. She's helped 85C work out its kinks since the Irvine store opened about a year and a half ago, by finding local sources and working with company chefs to tweak the menu to appeal to U.S. palates.

"We made it a little sweeter here, a little saltier here -- more flavor actually," Peng says of the American version of 85C's coffee. The chain's name comes from the centigrade temperature at which it brews its coffee.

Unlike Starbucks, with its oft-criticized slight and dry pastry selection, 85C is also a bustling, high-powered bakery. Every few minutes, workers burst from the kitchen with trays of fragrant golden rolls, to cries of, "Fresh bread! Fresh bread!"

Some trays don't even reach their destination before eager customers snatch up every steaming roll. While bread and coffee may not sound typically Taiwanese, the food reflects our global era. Some soft buns come stuffed with red bean paste or dried pork; alternately, muffin- or pizza-like offerings feature fruit or hot dogs. 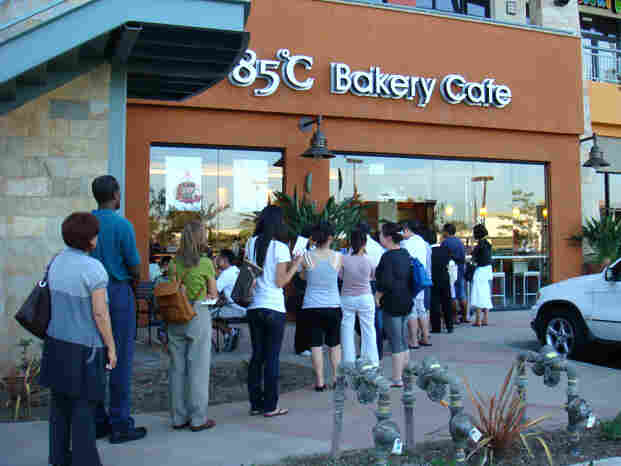 The lunch line forms at the 85C coffee shop in Irvine, where the Taiwanese chain opened its first U.S. store in the fall of 2008. Courtesy 85C hide caption 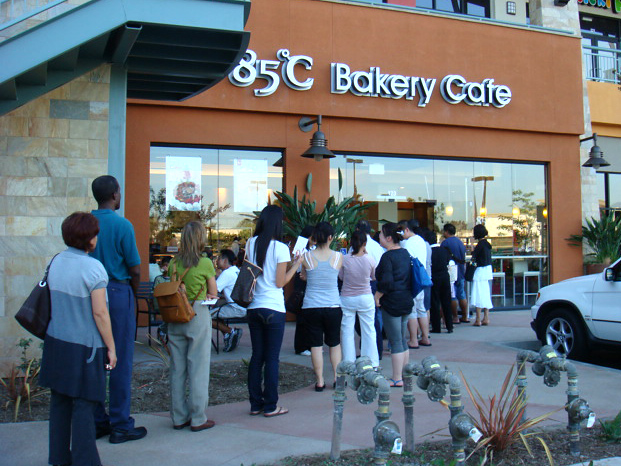 The lunch line forms at the 85C coffee shop in Irvine, where the Taiwanese chain opened its first U.S. store in the fall of 2008.

One surprise crossover hit is a black squid-ink bread, made with Vermont sharp cheddar cheese and garlic paste. Each roll costs less than a dollar, meaning there's incentive to stray outside your flavor comfort zone. According to Julia Huang, CEO of a company that tracks Asian trends in the United States, 85C could gain real traction in the U.S. market.

"For some reason, in the past four to five years, American tastes -- and we're not talking about cuisine, we're talking about snacks -- [and] comfort food has changed so much," she says.

Now, I like Sriracha hot sauce and bubble tea as much as the next Midwestern gal -- probably even more. But comfort food, for me, is generally not the same color as Barney. So I was skeptical when faced with a deeply purple piece of bread flavored with taro root.

"Marbled taro is actually one of our top sellers," Peng said. "We make our own taro filling, so it's really soft, really flaky. Our customers love it."

And I'll be damned if it didn't taste like an incredible soft, flaky, tasty -- purple -- donut. A week later, and I'm still craving another one.

Peng says that when the store first opened, most of their customers were Asian. Now, almost 50 percent are non-Asian. Catalina Jiménez, originally from Spain, works in finance. She says she spends a disproportionate amount of time waiting in 85C's regularly long lunch line.

Jiménez is partial to the chain's blueberry brioche. Another 85C regular is Abraham Walker, a South African native who never expected to enjoy Taiwanese coffee and cake in the United States.

"Quite honestly, I wouldn't mind having a share in this business," he says, "because it's busy all the time."

Walker may get his chance. 85C goes public in Hong Kong later this year, timed to coincide with the planned opening of its second U.S. store, in Hacienda Heights, Calif.

In a phone call from Taiwan, spokeswoman Kathy Chung said that company executives occasionally joke that their "ultimate dream" would be to open an 85C across the street from a Starbucks store in Seattle. But, she said, "That would also be an honor."