Accessibility links
World War II Bombs Still Menace Germany In the German town of Goettingen on Tuesday, three workers were killed and six wounded while trying to defuse an 1,100-pound Allied bomb -- a tragic legacy of World War II. In Berlin alone, officials estimate there are still some 4,000 unexploded pieces of ordnance. 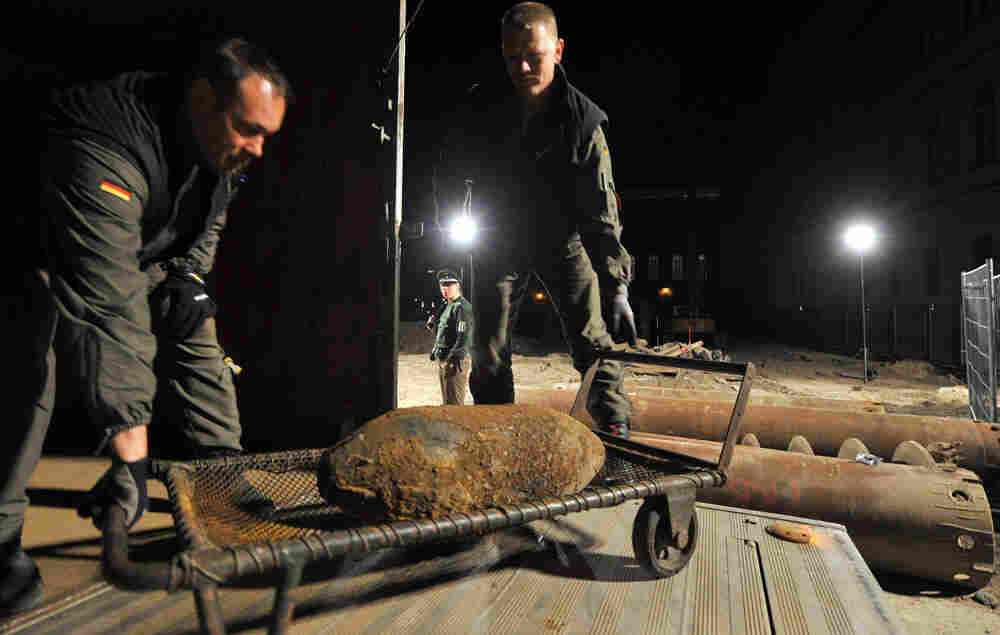 Bomb-disposal experts load a bomb after defusing it on Museum Island in Berlin last year. Sixty-five years after the end of World War II, unexploded ordnance and munitions are still a threat in Germany. Gero Breloer/AP hide caption 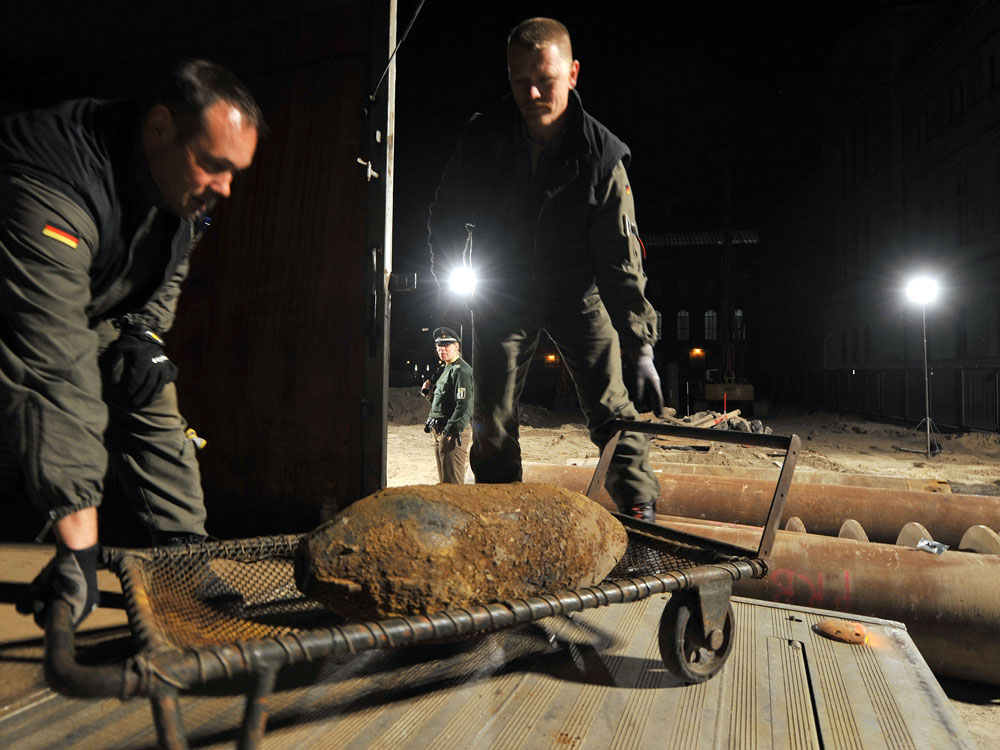 Bomb-disposal experts load a bomb after defusing it on Museum Island in Berlin last year. Sixty-five years after the end of World War II, unexploded ordnance and munitions are still a threat in Germany.

In the German town of Gottingen on Tuesday, three workers were killed and six wounded while trying to defuse a 1,100-pound Allied bomb -- a tragic legacy of World War II.

Sixty-five years after the end of the war, unexploded ordnance from the conflict remains a common, annoying and occasionally deadly hazard for construction crews across Germany.

The nine German bomb-disposal experts -- men with years of experience -- were working Wednesday on a bomb found during construction of a sports arena in the central German town. The police had already evacuated some 6,000 people when the bomb exploded. 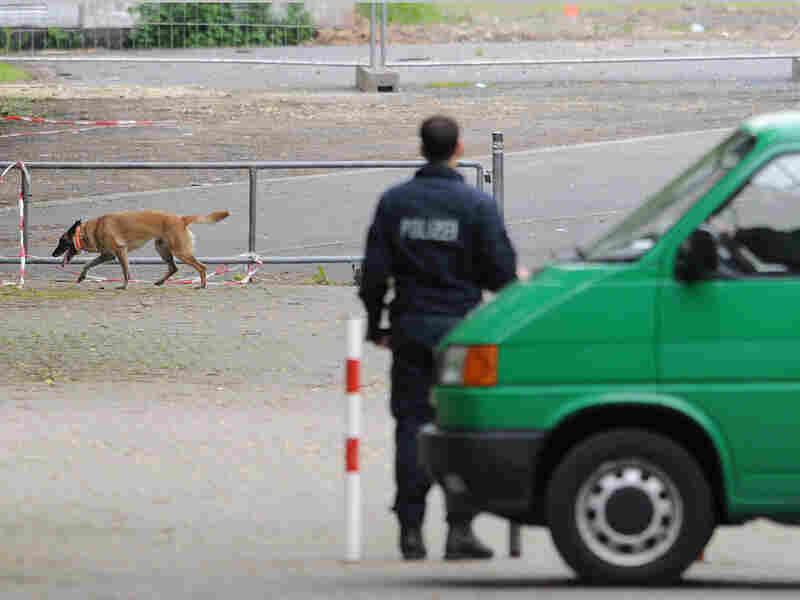 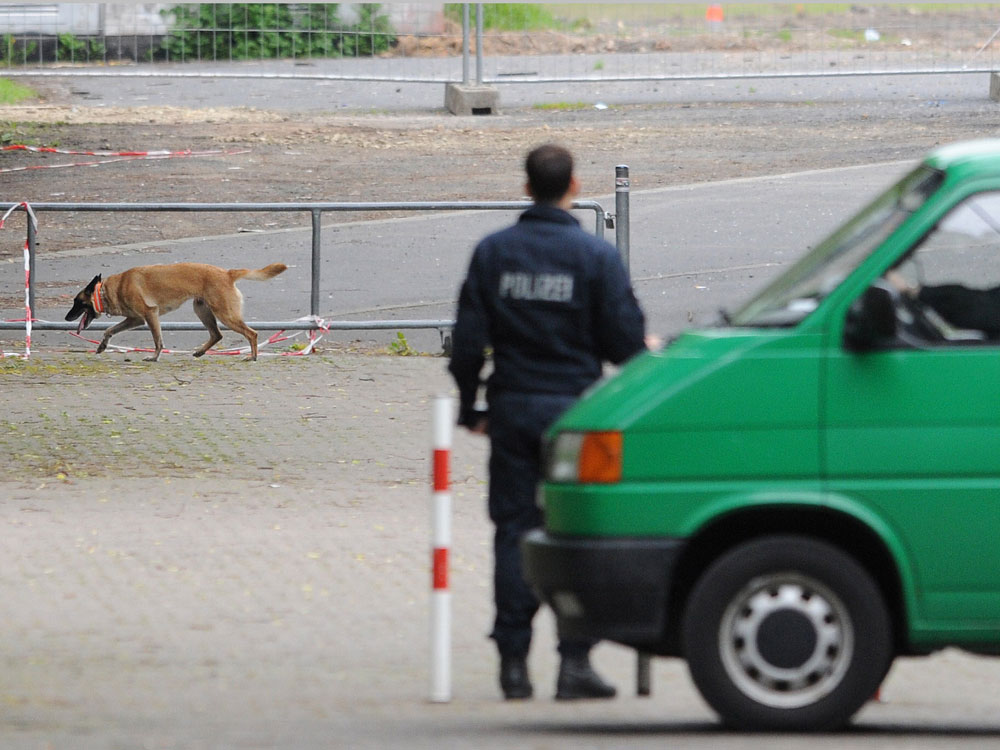 Peter Bodes, head of the Hamburg Ordinance Disposal Unit, told German public television that while old war bombs are commonplace, fatalities are not.

"Accidents happen, of course. But you always go out there thinking 'It won't be me.' So it's just dreadful when something tragic like this happens," Bodes said.

Unexploded Ordnance A Fact Of Life

Berlin city officials estimate there are some 4,000 unexploded pieces of ordnance -- mostly aerial bombs and artillery -- still scattered across the capital.

Laila Quetera was among the evacuees.

"[The police] simply announced to us that everybody must leave, because a bomb is being deactivated," Quetera says. "You just don't expect something like this to happen."

Unexploded World War II ordnance remains a problem in many European cities and in parts of North Africa. Berlin city officials estimate the German capital was bombarded by 465,000 tons of explosives and that 1 out of 8 bombs dropped on the city during the war did not explode.

According to Berlin's municipal records, some 7,300 bombs have been detonated successfully in the city since officials started purchasing aerial images from the British in the mid-1980s. 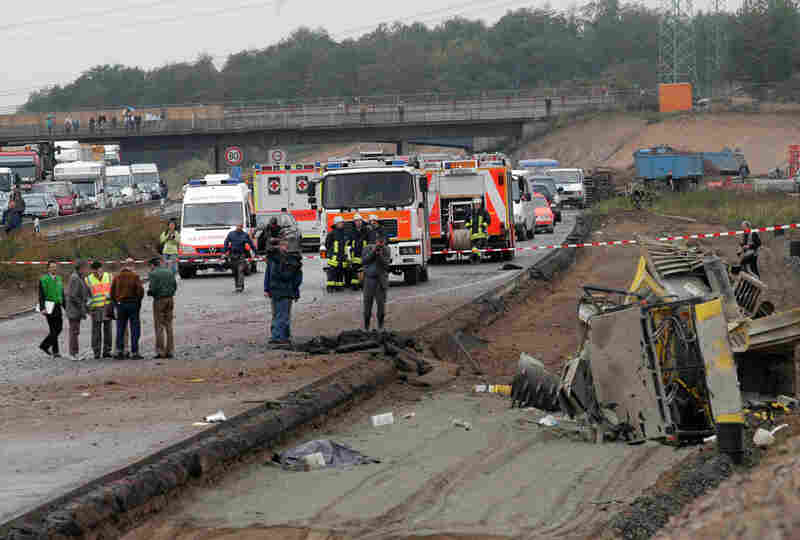 Emergency personnel secure a site where a World War II bomb detonated in October 2006 in the southeastern German state of Bavaria. A road worker was killed when he detonated the bomb while digging up a stretch of the busy highway. Juergen Mahnke/AFP/Getty Images hide caption

Berlin's City Hall requires construction firms to carry out bomb-risk assessments of sites, and the city pays for the eventual removal of any Allied explosives found. But the disposal of German-made bombs is paid for by the federal government, which is responsible for paying for the legacy of the Third Reich.

It all adds up to job security for those who make their living doing the dangerous work of bomb disposal.

Tom Alexander runs a Berlin company that specializes in locating and assessing the removal of unexploded ordnance.

"I still have to work about 15 or 20 years. We won't run out of bombs and ammunition," he says. "There are still massive amounts of ammunition in Berlin from the ground fighting and of course from the bombing of the city."

Alexander has a doctorate in biology, but decided to take over the business his father founded in 1947. A trained car mechanic, Alexander's father served as a German army explosives expert during the war.

Alexander says it's really just a guess how much unexploded ordnance is left in Berlin.

"The city's [Nazi] administration really collapsed in the fall of 1944 and records stopped being kept of the bombs -- especially in the last days of the war, when the Russians on the ground came closer to the city, it all went into a big chaos," Alexander says.

As this spring's ammunition finds show, the Allies targeted major transport hubs such as train stations and airports. But the acres of woods surrounding the city also contain munitions dumps where German soldiers got rid of their guns and grenades as the Soviets and the Western Allies converged on Berlin and what was left of Hitler's regime fell.

Hitler committed suicide in his Berlin bunker on April 30, 1945, and German commanders in Berlin surrendered May 2. A week later, almost all Nazi armed forces had unconditionally surrendered throughout Europe.

One legacy of Berlin's post-war division is that bomb busting differed on either side of the Berlin Wall. In the West, most construction sites were cleared of explosives before new buildings went up; the communist East seemed less bothered by what might be underground.

"Many new buildings were just [built] on bombs. They never did ammunition searches in socialist times," Alexander says. "They looked a little bit, but they didn't have the technology." Or the money, he adds.

In 1945, as the war ended, both the British Royal Air Force and the U.S. Air Force recorded the damage their bombs had done across Germany. These images are still paying off today.

Allan Williams, head of the archives, says that his team looks at aerial photos of war-damaged Germany every day.

"It's like Avatar of the Second World War. It's quite surreal," he says. "We are able to identify images showing bomb craters and many of the images show actual unexploded bombs on the ground. So through our work, we are able to supply bomb disposal agencies in Germany on a daily basis with photographs of particular areas."

The photographs prove helpful, most of the time.

But Berlin's City Hall is reluctant to make public its records of where ordnance is located beneath the city for fear of panicking residents.

Last summer, a woman was walking her German shepherd when it dug up and played with what looked like an odd bone. In fact, it was a live hand grenade left by the U.S. Army.

The bomb disposal unit was called, and the dog and its master walked on -- carefully.