Accessibility links
Turkey Close To Severing Ties With Israel Over Raid Turkey's ambassador to the U.S. warned Friday that his country could sever diplomatic relations with Israel over the deadly raid last week on a Turkish vessel carrying humanitarian aid to the Gaza Strip. Rocky Israeli-Turkish relations could affect U.S. policy in the region. 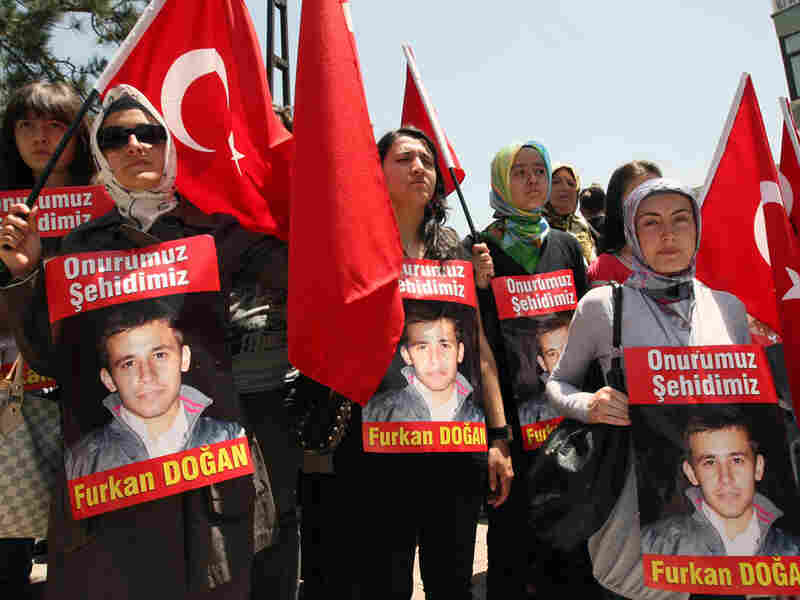 Women in Kayseri, Turkey, hold national flags and posters at the funeral Thursday of Furkan Dogan, 19, the youngest of the nine activists killed in Monday's military takeover by Israeli forces of aid ships heading to the Gaza Strip. Anti-Israeli sentiment is high after the incident, and now threatens Israel's relations with Turkey, its only ally in the region. Burhan Ozbilici/AP hide caption

Women in Kayseri, Turkey, hold national flags and posters at the funeral Thursday of Furkan Dogan, 19, the youngest of the nine activists killed in Monday's military takeover by Israeli forces of aid ships heading to the Gaza Strip. Anti-Israeli sentiment is high after the incident, and now threatens Israel's relations with Turkey, its only ally in the region.

Turkey's ambassador to the U.S. warned Israel on Friday that it is about to lose one of its only friends in the region.

Ambassador Namik Tan told reporters that tempers in his country will cool only when Israel apologizes for a deadly raid earlier this week on a humanitarian flotilla headed to the Gaza Strip. Eight Turks and one Turkish-American were killed in the raid.

Tan said Israel should publicly apologize for the raid, accept an independent investigation of the incident and halt its blockade of goods into Gaza, home to about 1.5 million Palestinians. Turkey has suspended military cooperation with Israel and some commercial infrastructure and energy projects.

He also said his country is disappointed in the Obama administration's muted response.

Balancing two allies, Turkey and Israel, will be tricky for the U.S., analysts say, but also key for advancing American interests in the region.

Israel's ambassador to the U.S., Michael Oren, said Israel wants to preserve its relations with Turkey, but that the traditionally moderate Muslim nation is changing.

What the flotilla incident does is, in many ways, isolate the United States in the region, because of its alliance with Israel.

Henri Barkey of the Carnegie Endowment for International Peace

"Our policy has not changed, but Turkey’s policy has changed, very much over the last few years. Under a different government with Islamic orientation, Turkey has turned away from the West," Oren said.

"No one wants to get into a permanent state of enmity with the Turks," Oren said. "Turkey is a massive nation with very powerful armed forces. It is a traditional friend of Israel. We are not looking for further disagreements or tensions with Turkey ... we are looking for ways to ameliorate the situation."

Some analysts say the diplomatic fallout to the flotilla incident could complicate a key U.S. foreign policy goal: to forge a united front against Iran's suspect nuclear program.

President Obama called for a new U.N. sanctions resolution to be passed this spring.

"We continue working very hard on this and expect to meet the president's objective," said State Department spokesman P.J. Crowley.

One Western diplomat, speaking on the condition of anonymity, says the flotilla incident hasn't helped. "It hasn't derailed it [the sanctions effort], but it has delayed it," the diplomat said.

Turkey, which is currently on the U.N. Security Council, opposes new sanctions, and its dispute with Israel over Gaza adds a layer of complexity to the diplomacy.

"What the flotilla incident does is, in many ways, isolate the United States in the region, because of its alliance with Israel," said Henri Barkey, a visiting scholar at the Middle East program of the Carnegie Endowment for International Peace.

Barkey said Turkey wants the U.S. to side with Ankara, and "in the process the dialogue [between the U.S. and Turkey] has become very acrimonious and it makes negotiations over Iran all the more difficult."

Barkey and other analysts were also perplexed by the Obama administration's handling of Turkey’s foray into diplomacy on Iran.

Turkish Foreign Minister Ahmet Davutoglu told reporters in Washington recently that his country and Brazil felt they had Obama's support when they persuaded Iran to ship some of its low enriched uranium abroad as a confidence-building step.

"We were encouraged to continue this process. We did not act on our own," Davutoglu said.

A day after Turkey and Brazil sealed the deal, the U.S. and other permanent members of the United Nations Security Council announced an agreement on a draft resolution for more sanctions on Iran. They argued that the fuel swap deal was no longer enough because it would leave too much low enriched uranium in Iran and did not address the fact that Iran is continuing to enrich uranium to higher levels.

Davutoglu argues that going down the sanctions path is unpredictable, while the deal he helped negotiate at least holds the promise of some diplomatic way out. "To resolve any dispute on these issues, we have to use diplomacy. Diplomacy, diplomacy, and more and more diplomacy," he told reporters.

Steven Cook, senior fellow for Middle Eastern studies at the Council on Foreign Relations, says the U.S. and Turkey agree on the goal of keeping Iran from becoming a nuclear weapons state, but they have very different views on how to do that.

"The Obama administration wants to move towards coercive diplomacy. The Turks see that as counterproductive," Cook told NPR. As for the troubles in Turkish-Israeli relations, Cook says that is a problem for the U.S. because "the Turks have been able to leverage a considerable soft power and economic power to influence public opinion in the Middle East."