Accessibility links
Helping The Pros: Ideas That Might Help Stop The BP Oil Spill The BP oil spill is proving to be a tough problem to solve -- and many amateurs are coming up with what they think could be potential solutions, from controlled explosions to a Kevlar water balloon -- or using hay to separate the oil from seawater. The problem is getting those ideas to the right people. 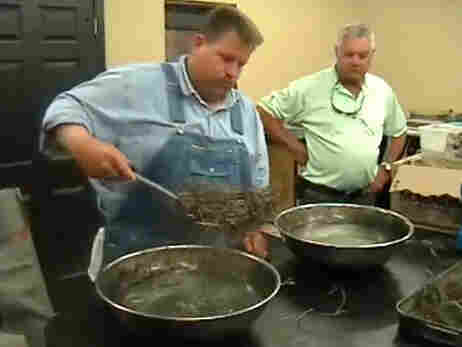 On the Internet, on talk radio, and even in comments on NPR.org, many people are offering their own solution for how to deal with BP's oil leak.

A sampling of proposed solutions for containment and cleanup posted on YouTube ranges from a hot-air balloon to a simple box -- to hay donated by farmers.

My husband is one of those with a suggestion. "The environmental effects of all this oil spewing out are pretty bad," he says. "Could it be that worse if we knew that a small bomb would plug the hole? I say explode it."

He's no engineer. Neither is my colleague, Chris Arnold, who has his own ideas.

"Could you take some sort of giant balloon made out of Kevlar or something -- and slide it over the broken pipe sort of like a water balloon you put over a faucet," Arnold says.

Sounds a little nutty, sure. But frankly, so do top hats, giant shears and mud plugs made of golf balls.

And since BP itself is soliciting suggestions on its own website, I figured why not give them a call. A woman from the BP Horizon response line tells me that suggestions must be put in writing, via the Web.

So, a visit to the Deepwater Horizon Response website takes me to an Alternative Technology Response Form.

It asks for a brief description of the suggestion and materials needed.

An explosive that can detonate underwater, I suggest -- or a giant Kevlar balloon.

I sent that in Tuesday, but haven't heard back.

Jeremy Boddy, who lives in Ontario, had an idea that he e-mailed straight to Tony Hayward, BP's CEO.

"It will cause an instant clog," Boddy says. "And the force of that will prevent anything from flowing through -- and so I was thinking, why haven't they thought of that yet? I mean, it's so simple."

"I kinda figured probably wouldn't," he says, "'cause I'm nobody."

Dwayne Spradlin, however, is not nobody. Or at least, he has had 2,000 somebodies -- scientists, engineers, and Ph.D.s across the world -- collaborating on their own solutions online.

The Gulf of Mexico project was Innocentive's first pro bono effort -- and Spradlin says it's already drawn 600 submissions, many with diagrams and supporting evidence.

Very interesting, indeed -- and it validates my husband's bomb theory. Spradlin goes on to list other suggestions.

"There's one that we put in the category we call angioplasty, right?" he says. The "angioplasty" idea involves "using different tubes that you might fill with very dense liquids into the tube which you use to impede the flow or shut it off."

That sounds a little like that air bag. Spradlin then mentions an idea for "essentially a funnel made out of very high strength, heavy-duty fabric," which, reinforced with Kevlar, might contain the oil.

When I tell Spradlin about my multiple deja vu moments, he's not surprised. Good ideas, he says, are often simple.

But even Spradlin can't seem to get in touch with BP. He recently reached an executive there -- and was told to fill out the online suggestion form.