Accessibility links
Shelter Under The Swastika: The John Rabe Story In 1937, John Rabe -- a native of Germany and a member of the Nazi Party -- helped to save the lives of thousands of Chinese civilians during the Rape of Nanking. Now he's the subject of an eponymous movie. Reporter Pat Dowell sits down with John Rabe director Florian Gallenberger and co-star Steve Buscemi to discuss the making of the film, Rabe's legacy and history's gray areas. 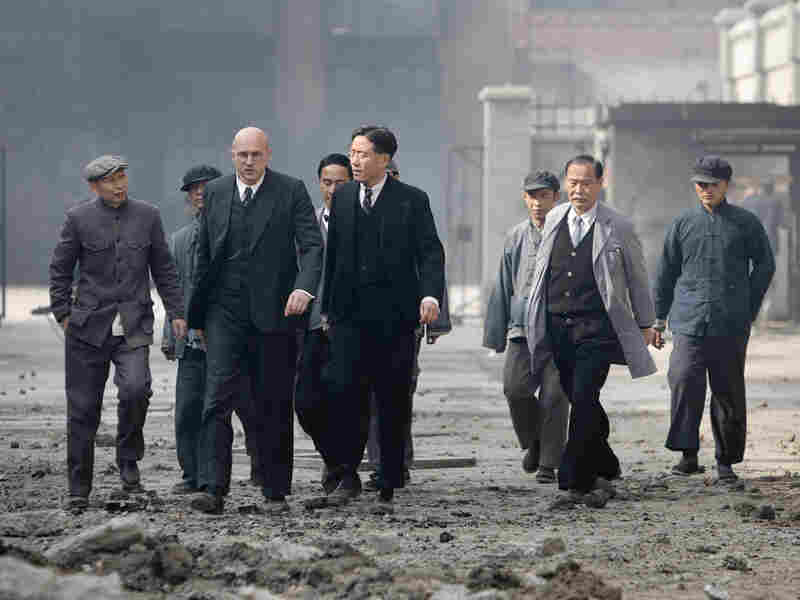 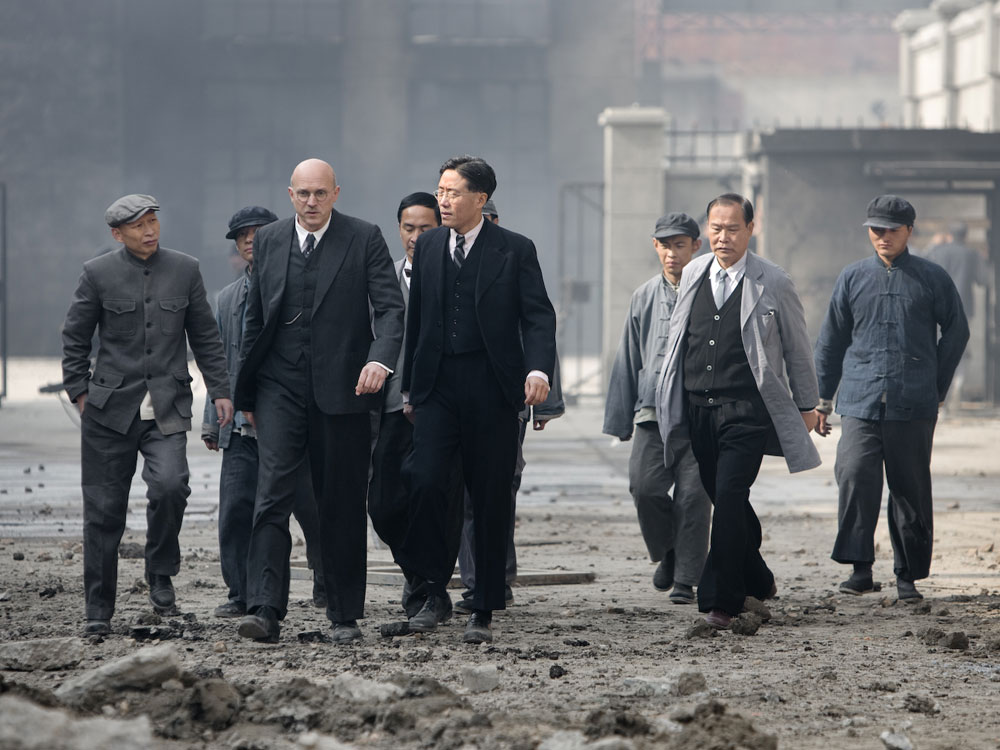 In 1937, a decade of skirmishes between Japan and China erupted into full-scale war. The Japanese army conquered the ancient Chinese capital of Nanking that December with such brutality that the event became known immediately as the Rape of Nanking.

In the weeks following the Japanese conquest, more than 200,000 prisoners and civilians were murdered, tortured and raped, according to witnesses who testified at the tribunal dealing with Japanese war crimes after World War II. Decades later, the official museum commemorating the victims of the massacre puts the number of victims at 300,000.

Hundreds of thousands in the city sought shelter in a safety zone set up by foreign businessmen, doctors and educators -- and it's the story of that effort to shelter civilians that's at the center of the cinematic drama John Rabe.

John Rabe was a real German businessman who lived in Nanking, now called Nanjing; for decades, he managed the operations of the Siemens company there. A member of the Nazi Party, Rabe had never been to Hitler's Germany or seen firsthand what was going on there; even so, he didn't believe the mounting criticisms he heard about Hitler. Germany and Japan were allies, and in the film, when Japanese planes first bomb the city, Rabe and his workers unfurl a giant Nazi flag like a canopy over their heads, in hopes the Japanese pilots will spare them.

The scene was suggested by historical photos that showed the real Rabe using the Nazi flag to construct makeshift shelters for the more than 600 Chinese refugees who camped out at his house and in his garden after the Japanese army took over Nanjing. This paradoxical image -- the swastika as refuge -- fascinates John Rabe director Florian Gallenberger.

"That is such a crazy thing that the icon -- rightfully the icon -- of the murdering of millions of people in a different place, in a different moment, became a symbol of security," says Gallenberger, who adapted the film from Rabe's meticulous diaries. The image shows precisely how complicated history is, the director says -- "that it's not just black and white but many shades in between, and that these stories with those many shades really help you to understand history." 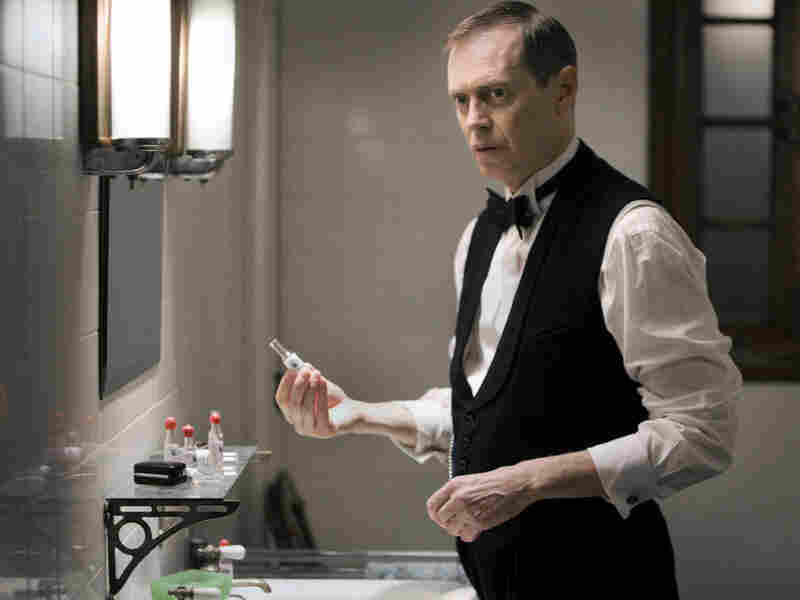 First, Do No Harm: Steve Buscemi plays Dr. Robert Wilson, an American expatriate who helped Rabe save thousands of lives during what quickly became known as the Rape of Nanking. Strand Releasing hide caption

'Thousands And Thousands Of Lives'

One of the witnesses at the war crimes tribunal was American doctor Robert Wilson, who is played in the film by Steve Buscemi. The actor says he knew nothing of Wilson before he signed on, but researched him after accepting the part -- even finding Wilson's letters reproduced on the Internet. (His papers are part of the Nanking Massacre Project, a digital archive drawn from collections at the Yale Divinity School.)

"And he really is just filled with rage at what he's witnessing," Buscemi says. "The atrocities are like nothing I've ever read about."

Wilson was the son of American missionaries in China. According to Iris Chang's best-selling history The Rape of Nanking, he was the only surgeon who remained in the city after the Japanese invasion.

"It would have been easy for John Rabe or Dr. Wilson and for the rest who helped create the safety zone to flee for their lives," says Buscemi. "Because their lives were in danger every day. And they had families. But they stayed, and their work mattered, and they were able to save thousands and thousands of lives."

Most sources estimate that more than 200,000 people fled to the safety zone in downtown Nanjing, which enclosed a majority of the foreign embassies and other institutions. Japanese soldiers continued to violate the zone on a regular basis, often at night, in small groups. They stole dwindling resources, kidnapped people and committed rape.

Wilson, as portrayed in the film, is skeptical about Rabe's sincerity but grows to respect him. In his letters, Wilson marveled that such a good man as Rabe could remain a supporter of Adolf Hitler. Rabe wrote to Hitler, convinced that he would intervene to help the Chinese civilians. He never received a reply.

'This Subject Is So Alive'

Buscemi came to the project close to the start of shooting in October 2007. Gallenberger had already been working on the film for nearly three years, trying to negotiate his way through various Chinese ministries to get permits to shoot his film in China. Gallenberger couldn't imagine shooting anywhere else, he says.

"Because it is finally and also mainly a Chinese story," the director says. Practical matters were a consideration, too. "We have 30,000 extras in the film, and there is no other country where you can have 30,000 Chinese extras but in China."

Gallenberger, who won an Academy Award for his 2000 short film Quiero Ser, was repeatedly delayed by politics -- even a joint Sino-Japanese business venture, which caused Chinese authorities to pause and consider whether this film might offend their business partners and scuttle their enterprise. Then a history textbook for schools was adopted in Japan that omitted any mention of the Nanjing massacre.

"And suddenly we were told, 'OK, now you can go on with your project because they really offended us with this schoolbook,' " says Gallenberger. "So we realized that we are not just making a film on a historical thing, but that this subject is so alive and so still giving trouble to them that we realized that the film will have a big significance to both Japanese and Chinese."

Indeed, the history of the Rape of Nanjing -- or the Nanjing Massacre, as historians now refer to it -- has been used repeatedly for propaganda around the world. During the Cold War, official Chinese history gave scant credit to the foreigners who maintained the safety zone, and it tended to ignore the nationalist Chinese fight against the Japanese. U.S. outrage dimmed after the war, meanwhile, as Japan became an ally against communist China.

As the Cold War thawed, official attitudes in China changed, and the Nanjing Massacre became a key part of Chinese history again. The Nanjing Massacre Memorial Hall, a large museum at the site of an unearthed mass grave, opened in 1985.

Shortly after issuing filming permits to Gallenberger, the Chinese government also approved a film about the Nanjing massacre to be made by a Chinese director. City of Life and Death, which focused less on the international members of the Safety Zone committee and more on the Chinese residents of Nanjing, was shot at about the same time (and competed for some of the same resources, such as the three vintage Japanese tanks available in China, according to Gallenberger). It was released in China just one week before Gallenberger's film. It was slated for an American release this year, but has been withdrawn, reportedly because the Chinese government was unhappy over the showing of documentaries about Tibet in the U.S.

When Gallenberger's film opened in China, it was the biggest release ever for a German film outside Germany, he says. But the film has not been seen in Japan, where the facts of the Nanjing Massacre -- including the number of victims, the size of the area in which killings are counted, even the number of days to be included by those measuring the massacre -- are still hotly debated among academics, politicians and political activists. Gallenberger says he has been told that his film is banned in Japan, but he thinks it's just that "no distributor really has the guts to take it" because of the potential protests.

One Japanese distributor showed some interest, Gallenberger says, on the condition that the filmmaker cut out the figure of Prince Asaka -- the royal family member who commanded the Japanese army in Nanjing, and who is shown in Gallenberger's drama coldly ordering the mass execution of Chinese prisoners of war. The director refused.

'Not The Superhero Type'

John Rabe ends with its title character's exit from Nanjing in early 1938. The industrialist returned to Germany, where he was arrested by the Gestapo and forbidden to speak of the massacre. He died in 1950, lost to history until his China diaries were rediscovered by the late Iris Chang, doing research in the mid-1990s for her book The Rape of Nanking. (Gallenberger wrote the character of a young Nanjing student photographer into his film as a tribute to Chang's fervent desire to document the massacre.)

Chang's book and the Rabe diaries, which were both published in the late 1990s, have sparked a resurgence of interest in the massacre -- and in Rabe.

"The outstanding thing about him is that he was actually a quite normal person," says Gallenberger. "He was not this kind of superhero type. In the situation that he got into, suddenly, he became more and more brave, then more and more daring, and more and more ready to risk his life for his values. And I think that's what really interested me, to tell the journey of a normal, average person who discovers his own greatness. Because that's a potential that's probably within all of us."

Rabe returned to Nanjing, in a way. His remains were not preserved at his burial site in Berlin, and all that remained was his tombstone. In 1997, it was removed to China and given a place of honor in the Nanjing Massacre Memorial Hall, where Gallenberger saw it as he researched his film.

Rabe's home in downtown Nanjing, meanwhile, has been restored and turned into a museum called the John Rabe Memorial Hall, which commemorates the work of the International Safety Zone Committee that he headed. It opened in 2006 and also houses a research center for peace.