Accessibility links
Novelist Tom Robbins Plays Not My Job Rumor has it that two things made Tom Robbins become a writer: taking LSD and moving to Seattle. So, since we're in Seattle, we've invited Robbins to play a game called "Unleash the power within!" Three questions about self-help guru Tony Robbins. 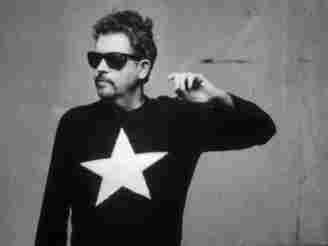 Rumor has it that two things made Tom Robbins become a writer: taking LSD and moving to Seattle. So, since we're in Seattle, we have some questions for the author of Still Life With Woodpecker, Even Cowgirls Get The Blues, and most recently, B is for Beer ... (which, delightfully, is for children.)

And now, the game where we invite on brilliant people and ask them stupid questions. Our guest today is the author of the kinds of books about which people say, that book changed my life. "Still Life with Woodpecker," "Even Cowgirls Get the Blues," "Skinny Legs and All," and most recently a book called "B is for Beer," which delightfully is for children.

SAGAL: We hear two things made Tom Robbins the writer he is today: taking LSD for the first time and moving to Seattle. We're very excited to have him join us here. Tom Robbins, welcome to WAIT WAIT...DON'T TELL ME!

TOM ROBBINS: Thank you. I'm thrilled to the marrow. My thyroid is pumping.

SAGAL: Now you've been in Seattle a long time, since the '60s.

SAGAL: Right. But you had started in North Carolina where you were born.

SAGAL: And your Virginia.

ROBBINS: And actually, I was trying to get to Japan.

ROBBINS: I ran out of money in Seattle.

ROBBINS: And it rained for 40 days and 40 nights and I thought, I could live here.

SAGAL: There was something about the rain that you - much like an orchid, you found that conducive.

ROBBINS: Well, it's a perfect climate for a writer.

SAGAL: Because you never want to go outside.

ROBBINS: It keeps you indoors. It's cozy. It's romantic. It turns you inward.

ROBBINS: I've actually been writing since I was five years old.

SAGAL: Since you were five?

ROBBINS: There are stories still in existence that I wrote when I was five. However, I did not get published until I was seven.

SAGAL: Well, every writer does have to have his years of struggle.

ROBBINS: I went to a large consolidated school in Appalachia. And I wrote the story when I was in the second grade and I took it up to the third floor to the school newspaper office that was written and edited by juniors and seniors.

ROBBINS: And I slapped the story down on the desk and I said, print this.

SAGAL: And they did?

ROBBINS: And they did. And I thought, well that was easy.

ROBBINS: Maybe I could do this for a living.

SAGAL: Wow. I was reading "Jitterbug Perfume" recently and one of the big themes in that book, which has a lot of themes, is the struggle against growing older. In fact, two characters figure out how not to, grow older that is. And I was wondering, you wrote that book 20 years ago, 25 years ago or so. And 25 years later, do you have any different feelings about growing older?

ROBBINS: Well I have discovered the fountain of youth. It's Wikipedia.

ROBBINS: Because I'm actually 77 years old, but Wikipedia lists me as 74.

SAGAL: If you were to go on and edit it yourself, which you can, you could be any age you want. You could be 47.

ROBBINS: Well, I have never, ever Googled myself. In fact, I think the Christian right prohibits such things.

SAGAL: You are allowed...

SAGAL: You are allowed to Google yourself until you need glasses.

SAGAL: We have a question from one of our twitterers. They sent this in to twitter/waitwait. Apparently, you have a love of mayonnaise?

ROBBINS: Yeah. I eat so much mayonnaise they were going to send me to the Mayo Clinic.

SAGAL: And that, ladies and gentlemen, is how you become the voice of the baby boom generation.

SAGAL: That's it right there. There are a lot of puns in your books, as a matter of fact. But is this true, are you in fact a genuine mayo enthusiast, or are you putting us on?

ROBBINS: No, I am indeed. I think it's the food of the gods.

ROBBINS: In fact, once, and this is a true story, having nothing else to mix the gin with, I took...

ROBBINS: ...mayonnaise and gin in a blender and created a new drink that my friends and I called the gin greasy, I think we called that.

ROBBINS: Yeah. And it was actually - first we mixed it with - there were only two things in the refrigerator.

SAGAL: What were you drinking before you got to that idea?

ROBBINS: In the refrigerator was blueberry pancake syrup and mayonnaise.

ROBBINS: So we didn't want to drink the gin straight.

ROBBINS: And we tried it first with the blueberry pancake syrup and it was awful. It was terrible.

ROBBINS: So then we mixed it with the mayonnaise and it was actually pretty good.

PAULA POUNDSTONE: Yes, on the heels of having it with blueberry syrup.

SAGAL: I wanted to ask you about your latest book, "B is for Beer." This is a children's book about beer.

SAGAL: Why? I'm all for this. But why did you think children needed a book about beer?

ROBBINS: Well children are exposed to beer all the time. Every time they watch any sporting event on TV, they see beer commercials.

ROBBINS: But aside from that, and aside from beer's historical and philosophical background, don't you think that children really need to know why their daddy keeps a second refrigerator out in the garage?

ROBBINS: And why he's out there late on a school night, with his shirt off, listening to Aerosmith records.

SAGAL: Are you still writing novels? I mean, you've written a children's book.

ROBBINS: I'm taking a sabbatical now from novel writing and I'm actually trying my hand at a TV reality show.

SAGAL: Okay, what will its premise be?

ROBBINS: Well, it's called "Fungi for the Straight Guy."

ROBBINS: And the premise is that each week we select a conservative middle age businessman from suburbia.

ROBBINS: And feed him a heroic dose of magic mushrooms.

ROBBINS: And a camera crew will follow him around for six hours and see what he does.

SAGAL: Tom Robbins, we are delighted to have you with us. And we've asked you here today to play a game that this time we're calling...

Unleash the power within.

SAGAL: I am sure this happens to you a lot. You're walking down the street and someone comes up to you and says, please, Mr. Robbins, help me find my greatest potential for success right now. And you say, oh I'm sorry, that's Tony Robbins.

SAGAL: Well, we are going to ask you about the other Mr. T. Robbins. Get two questions right and you'll win a prize for one of our listeners, Carl's voice on their home answering machine. Carl, who is Tom Robbins playing for?

SAGAL: All right. Here's your first question. Tony Robbins, as we know, is a big self-help mogul. He puts on seminars and shows. You can go to his private island in Fiji and learn from him. But for a handful of big wigs he does provide something unique, for a fee of $1 million dollars. Is it A, he'll give you his home phone number for a year. You can call him whenever you want. B, he'll appear in your family photos with you.

SAGAL: Or C, while motivating you, he will simultaneously get in touch with your rivals and enemies and de-motivate them.

SAGAL: You're going to say A, that he'll give you his home phone number. You can call him up whenever you want his help. You are right.

SAGAL: That's it. One million dollars per year gets you Tony Robbins' home phone number.

SAGAL: All right, second question. Tony Robbins has given advice to many world leaders, including Bill Clinton and, he claims, which person who doesn't seem likely to need this motivational device. Was it A, Mother Theresa; B, North Korean dictator Kim Jong-Il; or C, teen heartthrob Justin Bieber?

ROBBINS: Well, Mother Theresa just sounds too good to be true. So I'll go with the Korean.

SAGAL: You're going to go with the Korean. That North Korean Kim Jong-Il, head of the hermit kingdom has - I'd love it if that were true. That'd be great. But in fact, it was Mother Theresa. Tony Robbins says that he consulted with Mother Theresa. And Tony Robbins says, quote, "I asked Mother Theresa, tell me something, what really gives you ecstasy in life? And she said, what gives me ecstasy, Tony, is to see a person die with a smile on their face. And I thought, whoa, you know, not number one on my list," unquote.

All right, this is the last question. You get this right, you win. As you may know, Tony Robbins not only teaches success, he exemplifies it. How did he describe his, quote, "perfect day" once to CNN? A, quote, "If I had a perfect day, I'd know there was nothing more I could do to improve myself, and thus I would ascend to heaven," unquote. B, quote, "A day in which some guy digging in a ditch in Bangalore says to himself, Tony Robbins believes I can do better than this." Or C, quote, "Make love to my lady. Work out. Have a great breakfast. And then, you know, go ride the Harley, go play polo, that type of thing," unquote. Which of these did he say was his perfect day?

SAGAL: Make love to my lady. Work out. Have a great breakfast. And then, you know, go ride the Harley, go play polo, that type of thing.

SAGAL: Yes, that's what he said.

SAGAL: Tony Robbins makes over $30 million a year making other people successful, and he likes to spend it on his expensive toys like helicopters and polo ponies. Carl, how did Tom Robbins do on our quiz?

KASELL: Well Tom came through at the end, Peter, he had two correct answers and so he wins for Joshua Thompson.

SAGAL: Tom Robbins is the author of "Still Life with Woodpeckers," "Skinny Legs and All," "Even Cowgirls Get the Blues," and a whole bunch of other books you should just go read immediately. Tom Robbins, thank you so much for being with us.

ROBBINS: Thank you for having me.