The word is "stromuhr." It's a medical instrument -- don't worry, I had to look this up, too -- that measures the amount and speed and flow of blood through an artery.

There was some controversy. By the way, is that "s-y" or "s-e-y"? The judges put six contestants into the final round -- even though they didn't spell a word in the semi-final round -- to guarantee 10 finalists to fill a two-hour television spelling bee special.

Veeramani told reporters that she wants to go to Harvard and become a cardiovascular surgeon, where she can say, "Hand me that stromuhr. Stat!" 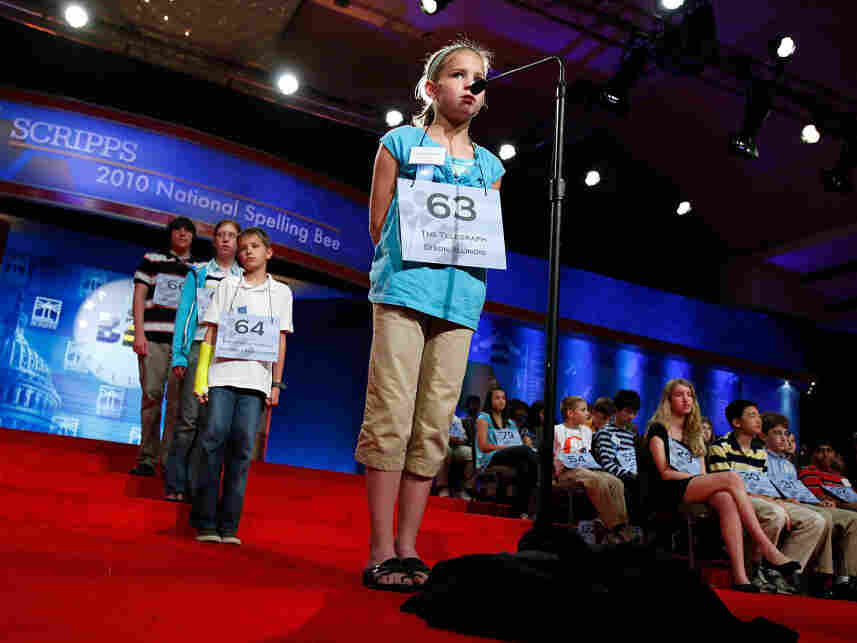 I'll be liveblogging the whole thing right here, and your comments will be welcome. Come by and share your remarkable spelling abilities, or do what I do and spell every word incorrectly in your own mind before watching various 11-year-olds knock every one of them out of the park.

Update: There's actually quite a dust-up regarding tonight's final rounds, and you should know that heading in, because otherwise, you'll be confused. You can read up on it at the D.C. Sports Bog, but here's the gist.

In order to fill the two hours of TV time on ABC tonight, they need a certain number of kids to be left for the final round. But in the second-to-last round, televised this morning on ESPN, kids were dropping much too quickly. Specifically, 19 kids had taken their sixth-round question, and 13 of them had heard the ding of the bell that eliminated them. That left six kids who hadn't yet had their sixth-round word, plus four who had spelled a question in that round correctly.

To avoid winding up with a prime-time broadcast featuring five or six kids and a lot of extra time to fill, they stopped the ESPN broadcast in the middle of the round, and that round will resume tonight at 8:00 on ABC. They'll be picking up the round -- the six kids who hadn't gone yet don't get to skip a word, although, as the Sports Bog notes, the Bee weirdly started calling all ten "Championship Finalists" anyway. (Semantics, but serious semantics if you're a Bee kid.)

So of the ten kids who are left, six of them have another word to spell before the actual final round can even start. Those six have had an extra few hours to study, compared to the kids who had to do their sixth-round question this morning.

It's not something you couldn't have seen coming -- they have it right in the rules:

If the ESPN broadcast concludes during a semifinal round, spellers who have not spelled in the round will advance to the championship finals for the conclusion of the last semifinals round.

So they didn't just come up with this, and it's on what's actually a relatively short list of rules, but that hasn't kept the anger at bay.

It's unfair mostly in terms of the special reward that is being on TV, in that the kids (entirely understandably) care a lot about making it to the prime-time broadcast, and kids are arbitrarily getting to do their sixth-round word there simply based on the fact that the fall in the last part of the round. The extra study time is the only thing I can think of that affects fairness as far as who's going to win, but it's not a nice note on which to start, considering that some of the contestants are really, really angry.