Accessibility links
Kate McGarry, Singing Outside the Lines of Jazz Kate McGarry is an equal opportunity vocalist. On her new CD, she revamps jazz standards with hints of popular music, and infuses her natural jazz instincts into pop, folk and original compositions.

Listen
Kate McGarry, Singing Outside the Lines of Jazz 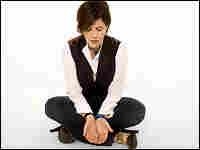 Songs from "The Target"

'The Heather on the Hill' (Lerner/Loewe)

I look at it like there’s a well inside, and I’m just putting different things into that well, and they’re going to come out later.

Kate McGarry is called a jazz vocalist, but she's hard to pin down. She draws on the music of her youth to inspire her—from the Irish tunes of her family's roots to musical theater to pop songs.

McGarry grew up in a big family—10 kids in all, plus mom and dad. Music, she tells Michele Norris, was always around the house.

"My favorite time was when my parents would sing to us. My dad would be singing 'I've got to buy a paper doll' and songs like that, and I wanted to just crawl up on his lap and listen to it all day."

On her latest CD, The Target McGarry makes a nod to her Celtic roots and the theater with the song "The Heather on the Hill."

"The song is Scottish in origin, and it's from Brigadoon," McGarry says. "But I heard it 15 years ago and it felt like I was back in the Irish pubs singing with my family again, so I really wanted to do that one."

McGarry often slips an Irish tune into her live sets, and says that the reaction from the audience is nearly always the same.

"People usually tell me that they've gone back to their childhood in some way. That's what it usually brings up, or a feeling of sadness that they connect with."

Once, when McGarry's husband (guitarist Keith Ganz) was playing in a noisy cocktail lounge, the crowd called out for something Irish. Ganz used his cell phone to call McGarry, who sang the traditional Irish song "Peggy Gordon" into the phone for the audience. The constricted sound of a cell phone coming through the microphone gave the song an old-fashioned feel that the audience picked up on.

"I could feel it, over on my end, the presence of a lot of people who were just kind of holding their breath along with me," McGarry says. "It was very strong."

McGarry can also swing a song hard. And she's not afraid to take on tunes associated with more famous jazz singers. "Do Something," is a song that the late Betty Carter made popular.

"Her version of it is just so smokin', no one can compare with that," McGarry says. "But it's so inspiring, I felt like at some point I had to put it out myself."

Also on the new recording—amid the sounds of pop, folk and jazz—McGarry reinterprets "No Wonder" a song by her friend, the Brazilian singer and composer Luciana Souza.

For The Target, her fourth record on the Palmetto label, McGarry relishes her myriad sounds and influences.

"I look at it like there's a well inside," McGarry says. "And I'm just putting different things into that well, and they're going to come out later."