Accessibility links
'Bonnie and Clyde,' Still Bold 40 Years Later Arthur Penn's 1967 film startled audiences with its lyrical violence — and the Depression-era story resonated for many Vietnam-era viewers with its portrait of a society in the throes of major upheaval. 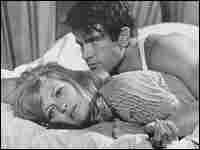 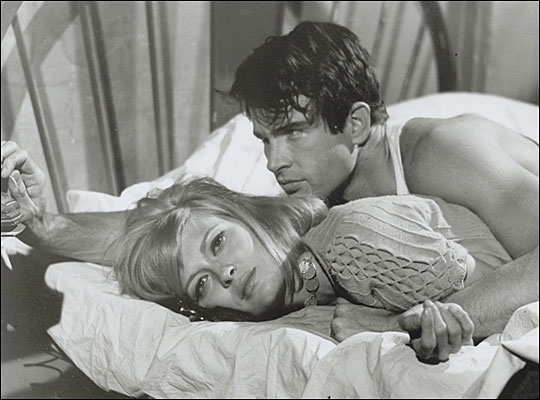 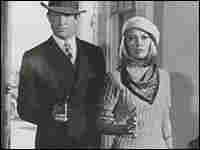 ... and through more than a few lively times, as they made unauthorized withdrawals from various Depression-era banks. Warner Bros. Pictures/Courtesy American Film Institute hide caption 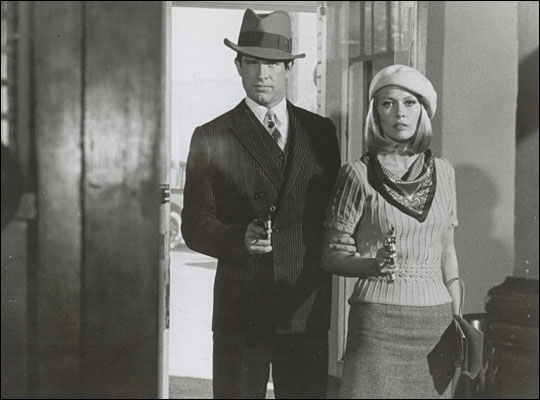 ... and through more than a few lively times, as they made unauthorized withdrawals from various Depression-era banks.

Call it a meet curt: In the iconic opening scene from Bonnie and Clyde, Faye Dunaway catches Warren Beatty trying to steal a car. 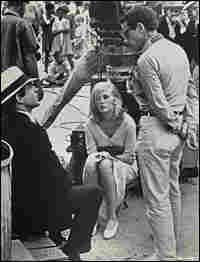 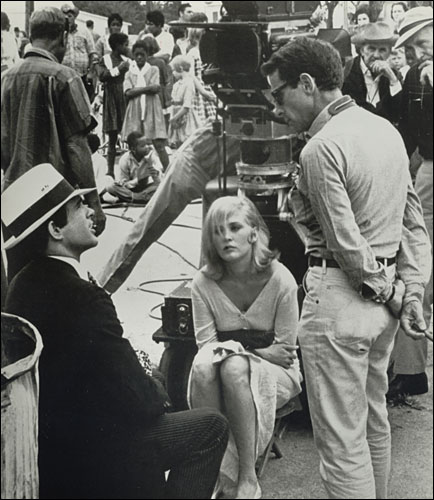 Warren Beatty, Faye Dunaway and director Arthur Penn (at right) on the set of Bonnie and Clyde.

The movie Bonnie and Clyde was released 40 years ago today. It opened during what's called the Summer of Love — which was also a summer of urban unrest at home and military action abroad.

But then long before Bonnie and Clyde, director Arthur Penn was learning to take risks. In the early years of television, he and his colleagues were turning out improbable TV dramas on live sound stages in New York.

"There was a certain kind of recklessness," he remembers. "Some astonishing things were attempted."

In a Kraft Television Theater adaptation of A Night to Remember, for instance, "George Roy Hill did the Titanic with three cameras in a small studio," Penn says. "The guts of all of us!"

To hear Penn tell it, those reckless days led directly to a huge shift in filmmaking. It was Hollywood's terror of TV that led the studios to simply co-opt East Coast directors like Penn, Hill and John Frankenheimer, and ship them off to the West Coast to make movies. Together they formed a kind of American New Wave.

And Penn's Bonnie and Clyde certainly was something new — right from the first frame. In the opening sequence, Faye Dunaway walks to her bedroom window to accost Warren Beatty. He's outside, transparently thinking about stealing her mother's car. She's naked.

"And she doesn't blink an eye," Penn says. "It was — It triggered so many things."

The 1967 film starred Dunaway as Bonnie Parker and Beatty as Clyde Barrow, leaders of the notorious Barrow Gang. The real-life Bonnie and Clyde lived a desperate, defiant life robbing banks at the height of the Great Depression.

What was so new about the movie? For one thing, it was downright sympathetic to its criminal characters.

In the 1930s, when the Barrow Gang was at large, "the country was really ... in desperate straits," Penn says. "I didn't have sympathy for the killing, but I could understand these bumpkins essentially working out the equation in their mind: 'If the banks come and take my house, I'm gonna go get what they have.'"

For another thing, it was anchored in its own time. That's the film's other connection to television: Bonnie and Clyde was made in an era when war was on television day in and day out.

"There's no question that ... Bonnie and Clyde and other films of the time are films that are about their moment," says Robert Kolker, a critic, film historian and author of A Cinema of Loneliness. "These films are really addressing present conflicts in the everyday world of the Vietnam War and the sort of mini-revolution that was going on in the culture of the time."

That mini-revolution played out everywhere, even in the reviews. Bosley Crowther, the old-guard critic at The New York Times, was outraged by the violence and panned the film. Pauline Kael, writing passionately in The New Yorker, rose to film-critic celebrity on the strength of her rave.

"I think they finally got attuned to the shifts in tone and the aesthetic gamesmanship that went on in the film," Kolker says — "the ability to take what conventional gangster films had always shown as being something terrible — robbing a bank, hurting people — as something, in a word, merry."

The real departure was the film's ending, in which Bonnie and Clyde are literally mowed down by machine guns, in balletic slow motion. It was Penn's way of lifting his characters into myth.

"One day I got the idea, just as clear as it is in the film, of how to have an ending that I thought would move this film out of the gangster story," the director said. "And I knew how to do it."

Bonnie and Clyde are famously seen exchanging one last look, face to face, before the machine-guns erupt.

"These figures with whom we've been so closely attached are just brutally torn away from us," Kolker says. "We've had this merry ride with a group of people, and then they're gone, and the screen rather anticlimactically goes black. And the audience is left alone. It's very powerful, and very isolating."

People were shocked at first by the bullets and the blood. But it wasn't just that. Penn argues that all art applies "a certain kind of violence" to the ideas that make up the status quo — that essentially, art is "a breaking apart of things as we know it."

By that time, America had learned a lot about things breaking apart. Bonnie and Clyde, Penn says, was "a film of the '60s; it was not the '30s."

And something about those two turbulent eras — brought face to face-- created what amounted to a cultural explosion.