Accessibility links
What Will Happen To The Oil From The Gulf? Most of the sucked-up oil is unusable and must be treated as waste. And anything that is contaminated with oil -- from seawater to workers' clothing -- has to be treated as potentially hazardous. A network of companies is stepping in to handle the waste, and they'll be billing BP for their efforts. 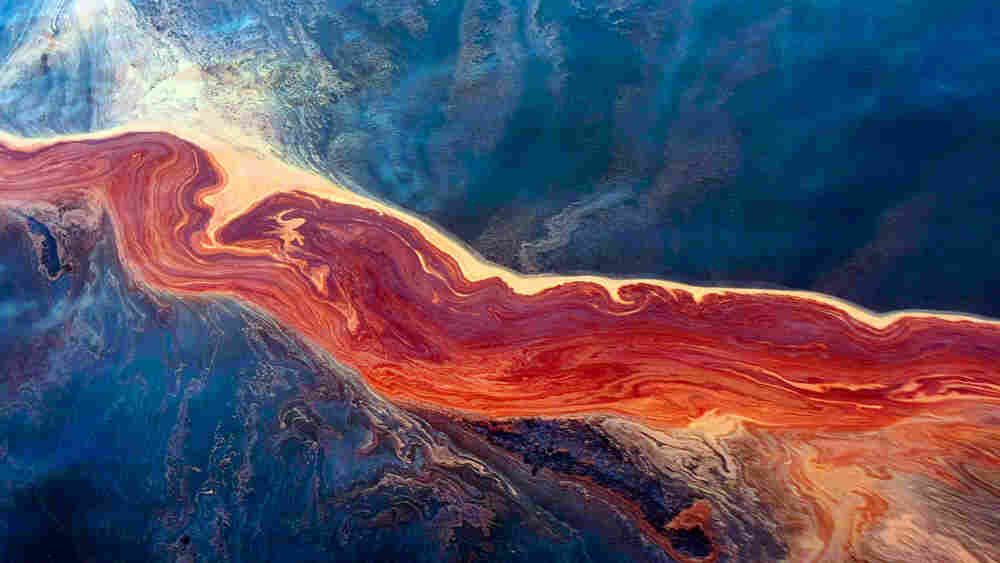 Oil from the leaking Deepwater Horizon rig swirls through the currents in the Gulf of Mexico last month. Dave Martin/AP hide caption

As the Gulf states struggle to deal with the effects of the oil spill, they're facing a new challenge: a mountain of waste from the cleanup effort. Anything that is contaminated with oil -- from seawater to workers' clothing -- has to be treated as potentially hazardous.

A network of companies is stepping in to handle the waste, and they'll be billing BP for their efforts.

Some of what's been cleaned up is usable. BP says it owns the oil floating in the Gulf, and the company is trying to salvage and sell as much as it can. Experts say that oil pumped from close to the source can be sent to refineries and turned into petroleum products.

But most of the oil is too weathered to be reused. Wierd Koops, chairman of Spill Response Group Holland, says he can tell that just by looking at aerial footage of the spill. "We call it a chocolate mousse because of the red-brown color, and the red-brown color happens when oil picks up more than 60 percent water," Koops says.

Spill Response Group Holland has just flown in special equipment known as "sweeping arms" that can suck up 92,000 gallons an hour, much more than the skimmers that have been in use.

The mix of oil and water that is gathered by skimmers then follows a long journey through the complex world of waste processing. BP sends the mix by barge to shore where it can be processed. The company says the stuff has to be "dewatered" and taken to a commercial facility that can handle that waste.

BP says that skimmers have already sucked up more than 14 million gallons of oily water. The water portion of that is considered contaminated and has to be handled with care. Much of it will end up at commercial waste collection facilities across the region.

River Birch Landfill in Avondale, La., is one such place.

"If it's water contaminated with hydrocarbons, we would send it to our Class I nonhazardous injection well," says Vic Culpepper, technical director at the facility.

River Birch constructed these "injection wells" specifically to store the waste that the oil industry generates on a routine basis. They are essentially porous layers of sand 7,000 feet below the surface of the Earth. The company pumps the contaminated water down into those wells -- for a fee, of course.

Now, solid waste -- such as contaminated soil -- has to be handled differently. The company must add an agent to solidify any liquids; it is then put into a special landfill. The same goes for any other solids, according to Rodney Mallet of Louisiana's Department of Environmental Quality (DEQ).

"Oil-contaminated rags, gloves, all the personal protective equipment, is classified as a solid waste, and it goes to a Type I DEQ-permitted landfill. It has the double liner and the leachate collection system."

The collection system helps keep any runoff out of the groundwater. Even though the spill is already generating huge amounts of waste, Mallett isn't worried about finding space for it all. He says that with all the hurricanes that routinely roar through the region, he has identified plenty of sites that can handle massive amounts of waste.

The waste disposal problem is generating business for a whole host of companies -- for oil recyclers, commercial landfills and waste management folks. All of them are answerable to a network of federal, state and local regulators, who are working overtime trying to inspect all of this stuff and make sure it's being handled properly.

"Any hour that I spend working on this, we have a separate billing system. And we are going to be billing BP for our hourly rate as well at DEQ," Phillips says.

So, the spill will generate another kind of waste: a pile of billable receipts for BP.