Accessibility links
At U.S. Bases In Iraq, The Fire Sale Is On As the U.S. withdraws troops from Iraq, hundreds of bases, combat outposts and contractor camps are being slowly dismantled and transferred to Iraqi control. Used equipment and material is being given away or sold at bargain prices, creating a new resale industry in Iraq. 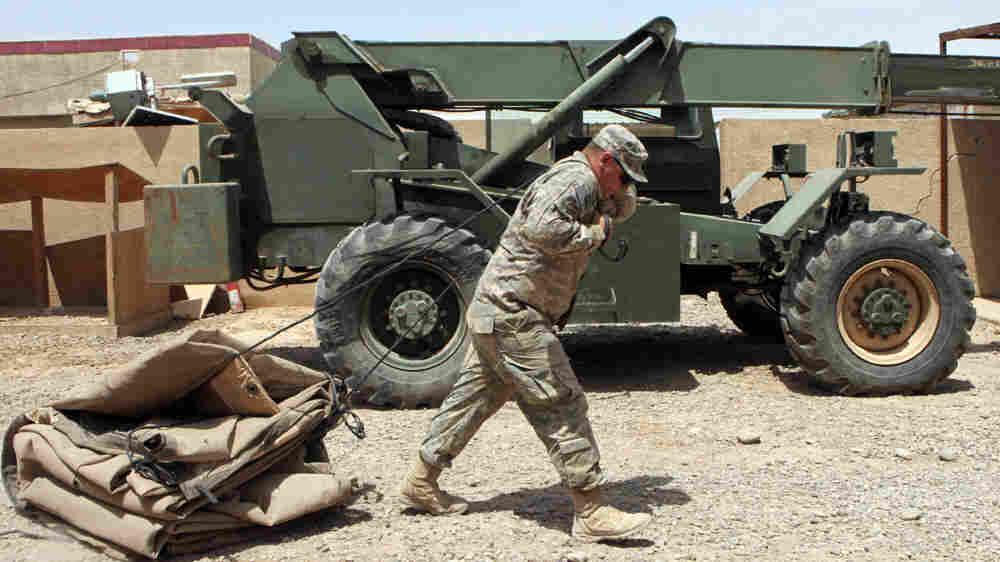 A U.S. soldier drags a tent as his unit prepares to leave its base northeast of Baghdad. U.S. troop levels will be cut in half, to 50,000, by Aug 31. Khalid Mohammed/AP hide caption 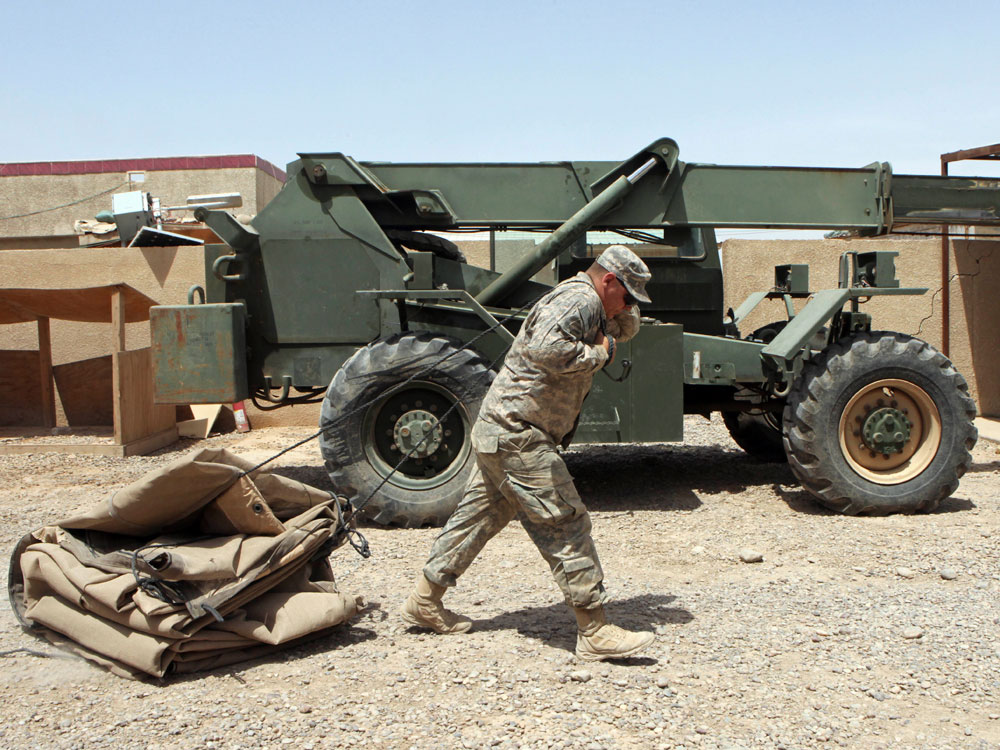 By the end of summer, the number of U.S. forces in Iraq will be pared in half to about 50,000 troops, part of the massive drawdown under a 2008 agreement negotiated with the government in Baghdad.

Aside from scaling back manpower, tons of equipment is being shipped out, too.

But not everything is leaving the country.

Hundreds of bases, combat outposts and contractor camps established since the 2003 invasion of Iraq are being slowly dismantled and transferred to Iraqi control. Equipment and material worth millions of dollars is being sold off piece by piece, or being handed over wholesale to the Iraqis, creating a thriving new resale industry. 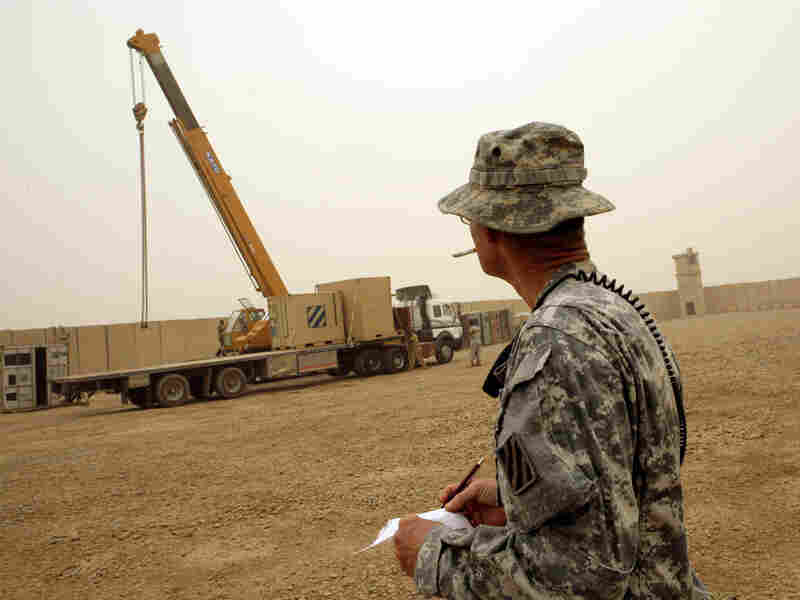 Army Staff Sgt. John Kurtz of Hinesville, Ga., watches Iraqi contractors load a cargo container onto a truck for transport from a joint security station in northern Baghdad on May 14. Soldiers of the 3rd Infantry Division, based at Fort Stewart, Ga., are set to transfer their base to Iraqi security forces in late June. Maya Alleruzzo/AP hide caption 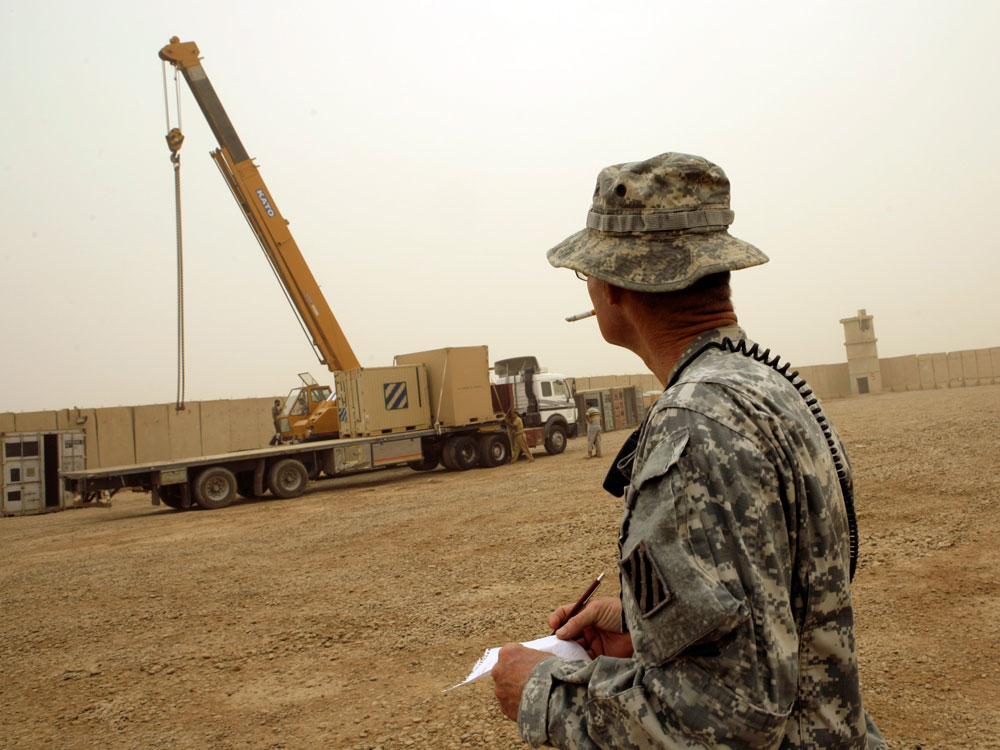 Army Staff Sgt. John Kurtz of Hinesville, Ga., watches Iraqi contractors load a cargo container onto a truck for transport from a joint security station in northern Baghdad on May 14. Soldiers of the 3rd Infantry Division, based at Fort Stewart, Ga., are set to transfer their base to Iraqi security forces in late June.

'Made In The USA'

On a dusty lot just north of the city of Ramadi, in Anbar province, Falah Lahej picks through stacks of equipment being sold. The lot is surrounded by flat, brown desert, and the pulsating summer sun gives the goods strewn about the area a burning sheen.

There are generators with engraved with the words "Made in the USA," barrels, barbed wire, an industrial scale, old wooden crates and other items once used by the Americans.

Lahej is looking to buy a load-bearing hook. "The things here are better than the ones in the local market," Lahej says. "They are good quality; the ones in the market are not durable."

Faiz al-Dulaimi acts as a middleman. He buys whatever he can straight from the bases that are closing. "In the past, all this belonged to the Americans and nothing would leave the bases. Now they sell them because they are considered a burden, I guess. There are two ways we get the goods. Some stuff is sold via a Turkish company that buys them from the Americans and sells them to Iraqi traders," he says.

And then there is the other, less legitimate, way.

"The Americans turn over every base to the Iraqi army and police -- and they are all thieves," Dulaimi says, laughing.

Once the bases -- and what is left in them -- are handed over, the Americans have no control over what happens to the material and its resale.

Meanwhile, at Camp Victory in Baghdad, U.S. units are dedicated to receiving military hardware from bases around the country, fixing it up and then making it ready to ship out.

On a recent day, MRAP armored vehicles are being dismantled piece by piece so they can be shipped back to the United States or on to Afghanistan for the U.S. war effort there.

Army Master Sgt. Tim Regan, of the 4/2 Stryker Brigade out of Fort Lewis, Wash., says the clock is ticking.

"We see about 100 pieces of equipment come through here on any given week, so it's an extremely busy, busy process," Regan says.

Major military hardware like the MRAPs is not being given over to the Iraqis as the U.S. military departs. But hundreds of millions of dollars' worth of equipment and infrastructure are being given to the Iraqi army and police.

Cheaper To Leave It Behind

Capt. Steven Dowdy is in charge of determining what stays and what goes for the Stryker brigade. 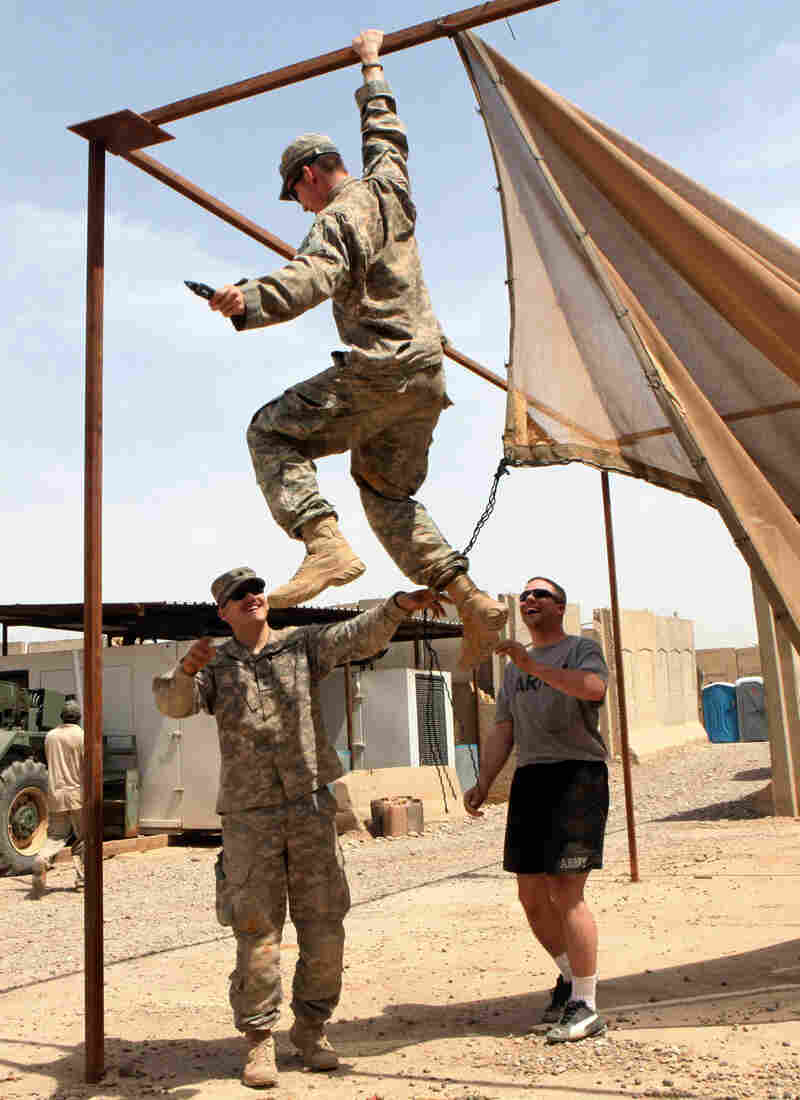 U.S. soldiers work to strike their camp as they prepare to leave their base. Khalid Mohammed/AP hide caption

"Moneywise, we can approximately sign over $25 million [worth of equipment] to the Iraqi government. And equipmentwise we can sign over containment housing units, the CHUs, anything that is not military-related," Dowdy says.

That is $25 million to $30 million in equipment per camp. Dowdy is overseeing the transfer of six to eight camps to the Iraqis, but there are hundreds of them across the country.

The reason some material is being given to the Iraqis is simple, U.S. officials say. For example, a blast wall is worth $5,000, but it would cost $15,000 to ship it out. So, leaving it to the Iraqis is actually saving the U.S. military money.

Dowdy says he has no clue what happens to the equipment after it is left to the Iraqis.

In another part of Anbar province, an Iraqi worker cleans out a trailer, or CHU -- containment housing units. They are ubiquitous at every U.S. military and contractor facility in Iraq.

There are more than two dozen of them at this market, some fully fitted with showers and toilets. Many are still filled with the detritus of their previous owners -- white boards with route maps drawn on them; bed frames and posters of sports stars.

Raghdan Jameel says he purchases them for about $1,000 each. "That's not even 1 percent of its real price. We sell them on to farmers or to government officials who want to put their guards to live in them," he says.

It is a lucrative business and he predicts there will be a lot more of these trailers and other American goods for sale as the U.S. pullout picks up pace.