Accessibility links
Preserving Navajo History In Canyon De Chelly Every spring and summer, after the winter thaw allows, about a dozen Navajo families still return to their old homesteads at the bottom of Arizona's Canyon de Chelly. The canyon has cradled human civilization for thousands of years. 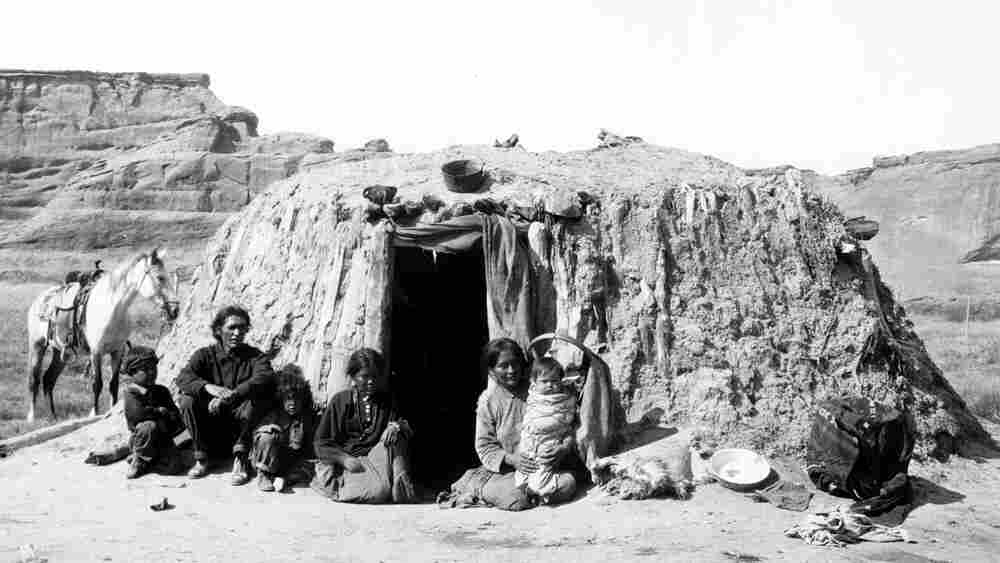 Every spring and summer, after the winter thaw allows, about a dozen Navajo families still return to their old homesteads at the bottom of Arizona's Canyon de Chelly. The canyon has cradled human civilization for thousands of years. Early Puebloans, ancestors of the Hopis, built cliff dwellings high in the sandstone alcoves. And the canyon has been a sacred refuge to the Navajos for centuries.

In 1931, Congress authorized 84,000 acres -- entirely on the Navajo Nation -- as Canyon de Chelly National Monument. Lawmakers wanted to preserve the archaeological resources in the canyon. Today, about 80 extended Navajo families have the right to use the canyon.

Those who live there reside on the rim, and a few, like Lupita McClanahan, still maintain family land down in the canyon.

It's about four miles of rough driving through deep sand to McClanahan's summer home. The farther up the creek bed you go, the higher the orange sandstone cliffs soar into the sky. 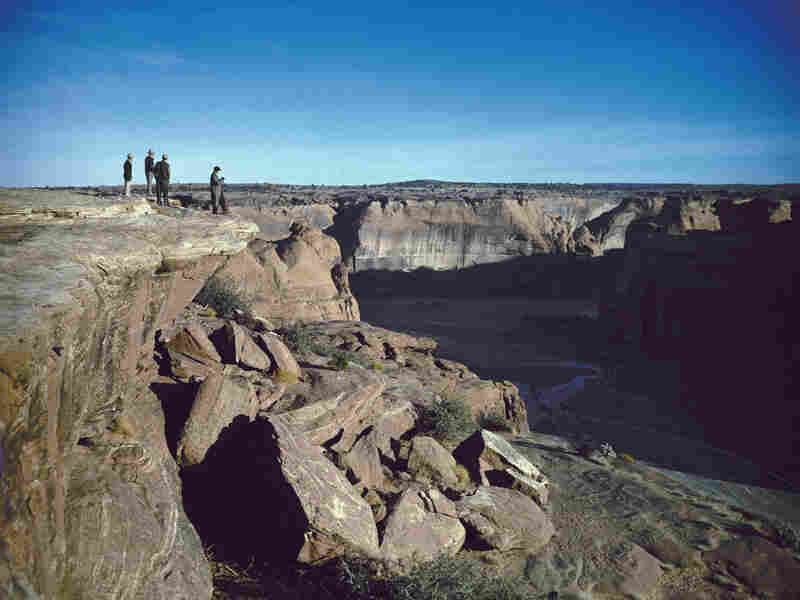 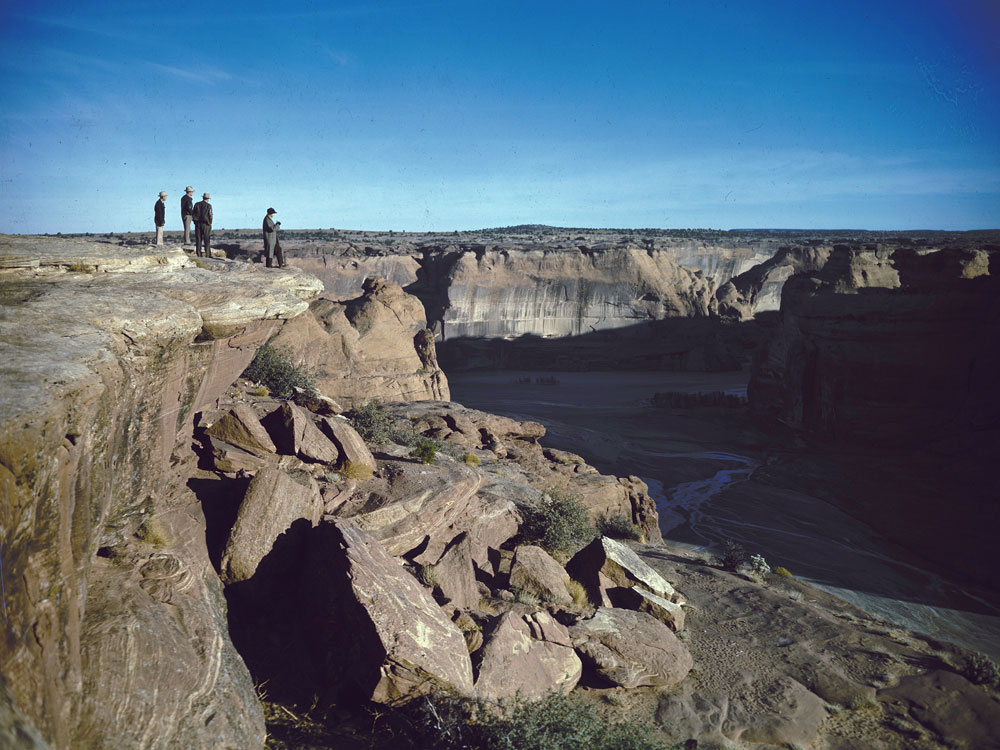 Canyon de Chelly, a national monument on Navajo land in northeastern Arizona, as seen in November 1945.

McClanahan unlocks the gate to her family's homestead. Her dark hair is pulled back into the traditional Navajo hair knot and tied with white yarn. In every possible way, she's trying to hold on to the traditions she learned growing up here. When McClanahan was a child, her family grew corn and had 200 fruit trees.

"You get a lot of peaches and apples, and you take rusted buckets out there and you pick them," McClanahan says. "When you pick a peach you drop it in the bucket -- dong, dong, dong -- and the sound of it is still with me today."

McClanahan's family would lay the peaches out on rocks to dry in the sun. "And you see the ledge sometimes, and it's like an orange carpet or a red carpet up there," McClanahan says.

But 50 years later, only a couple of her trees still bear fruit. A decade-long drought has hurt farmers in the canyon. Many Navajos have left farming and the canyon behind for the ease of life with electricity and running water.

McClanahan's home is a traditional eight-sided hogan, cool and dark inside with a dirt floor and log walls chinked with mud. Her husband, Jon, built it with the door facing east toward the rising sun as is the Navajo custom. Together, she and her husband operate a guide service in Canyon de Chelly. 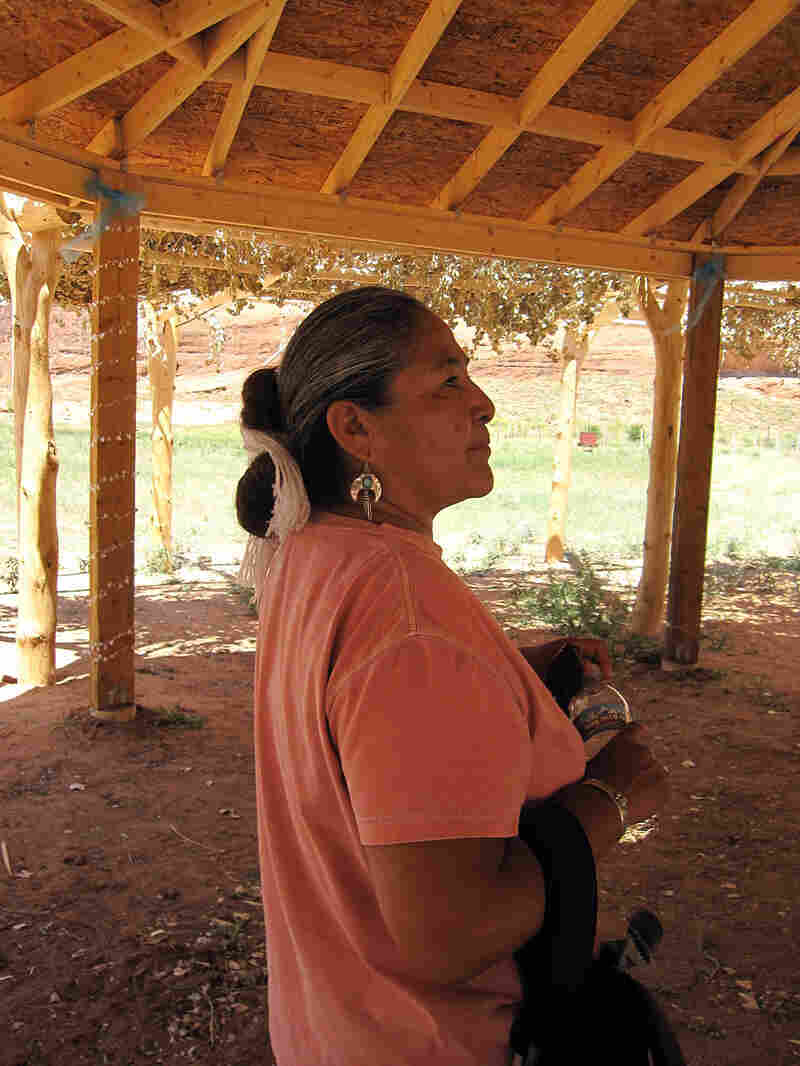 "I have to be here," she says. "This is home. This is my life. If I leave, if I have to go somewhere, it's like somebody broke my journey."

For a few years, McClanahan worked for the National Park Service in the canyon. Wilson Hunter, the deputy superintendent of the park, grew up here, too. "Everything was there we needed," Wilson says. "If we needed water you just start digging with your hand along the side of the wash. Get a little hungry, go to the cornfield and get some corn and just build a fire, and we roast 'em."

Canyon de Chelly National Monument is an unusual partnership between the federal government and the Navajo Nation. The tribe is responsible for the natural resources, and the National Park Service protects the thousands of archaeological sites.

The families that still return to their summer homesteads and farms will sometimes walk down the old trails. Others will drive pickup trucks when the water flows allow.

McClanahan is determined to continue the old traditions.

"My dream is still happening. I want this place to be filled with corn again; I want my home to have lots of peaches, lots of apples," McClanahan says. "I want to hear the sound of that peach drop in the bucket again."

McClanahan knows it's tough to draw kids back to the land, to the old ways. But she brings her grandsons here, so they'll have a future in Canyon de Chelly -- so they'll know how to build a fire, plant and water corn, pray to Talking God, and have the chance to drop peaches in those buckets.