Accessibility links
Plight For Pelicans: Oil Puts Nesting Season At Risk One year after graduating from the endangered species list, Louisiana's brown pelicans are in danger again, as their nesting islands are surrounded by oil. Baby birds are especially at risk as their parents bring them fish — and deadly oil — from the Gulf.

Biologists are saving as many individual birds as they can, but they say the oil has arrived on Louisiana's coast at the worst possible time. 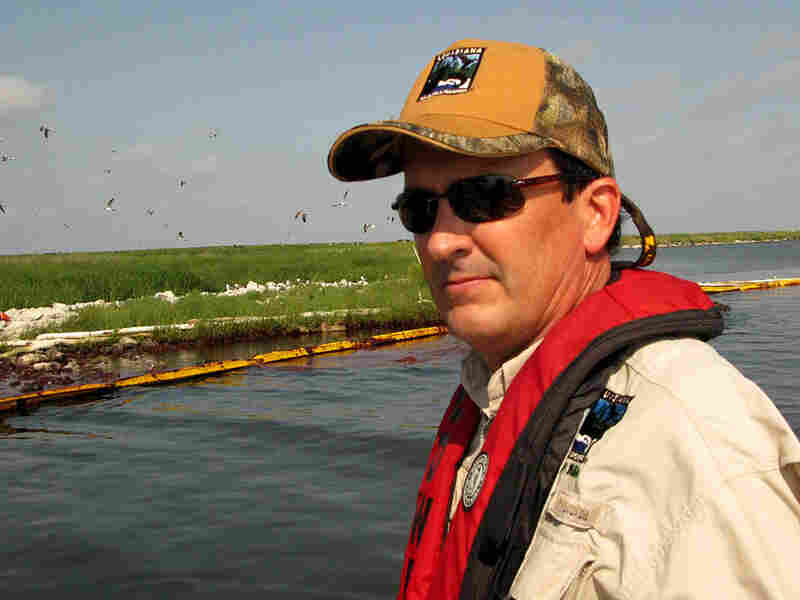 Michael Carloss was a surrogate parent for pelicans more than 30 years ago. Elizabeth Shogren/NPR hide caption 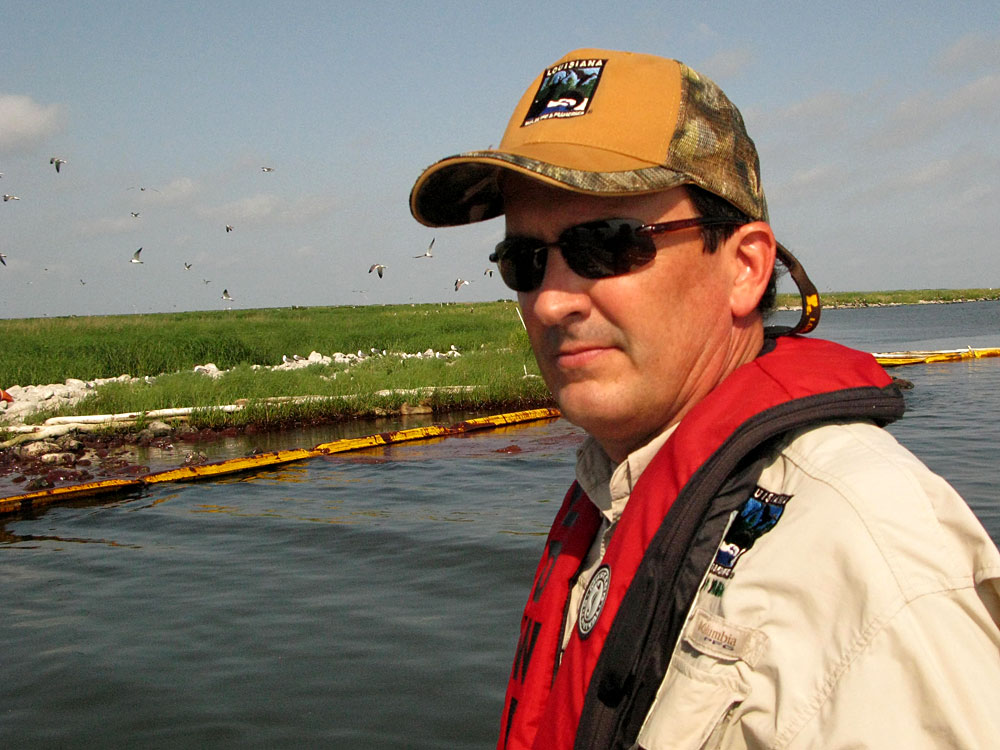 Michael Carloss was a surrogate parent for pelicans more than 30 years ago.

The small marshy islands near Grand Isle Louisiana are chock full of pelicans. From the water, many heads can be seen sticking out of the grasses. It seems as if every square foot is taken -- either by an adult sitting on a nest or a gangly white chick waiting for Mom or Dad to bring back some fish.

But oil has invaded this nursery scene. Pools of what look like dark-chocolate syrup fringe the islands. Sticky mats of oil as small as a bottle cap or as large as a living room float just offshore where the birds feed.

That pelicans have become such a visible victim of the BP spill is particularly poignant because the pesticide DDT almost drove them to extinction in the 1960s. Last year, they finally graduated from the endangered species list.

Nearly 400 oil-covered live birds have been picked up -- most within the past several days -- since the BP well started spewing on April 20. More than 600 dead birds have also been found, according to statistics from the Federal Fish and Wildlife Service. Biologists fear it could get much worse if currents or a storm push more of the spill toward the coast. 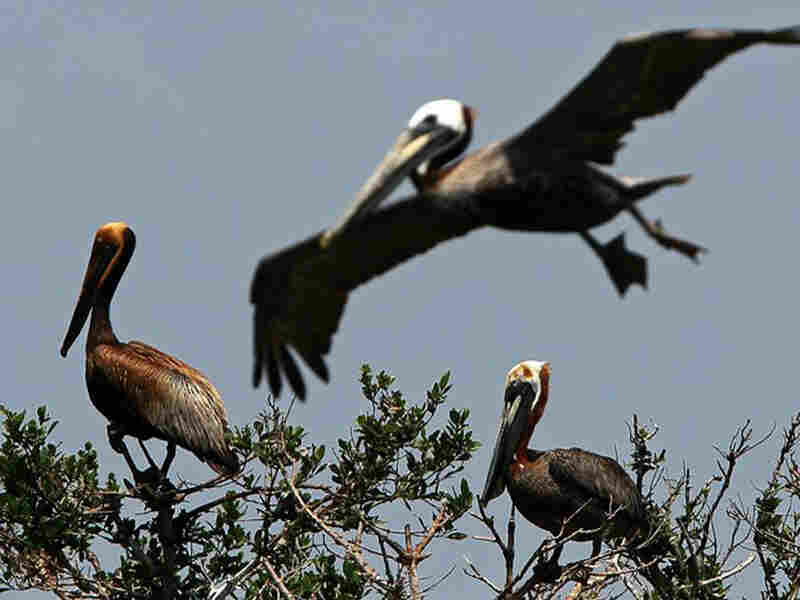 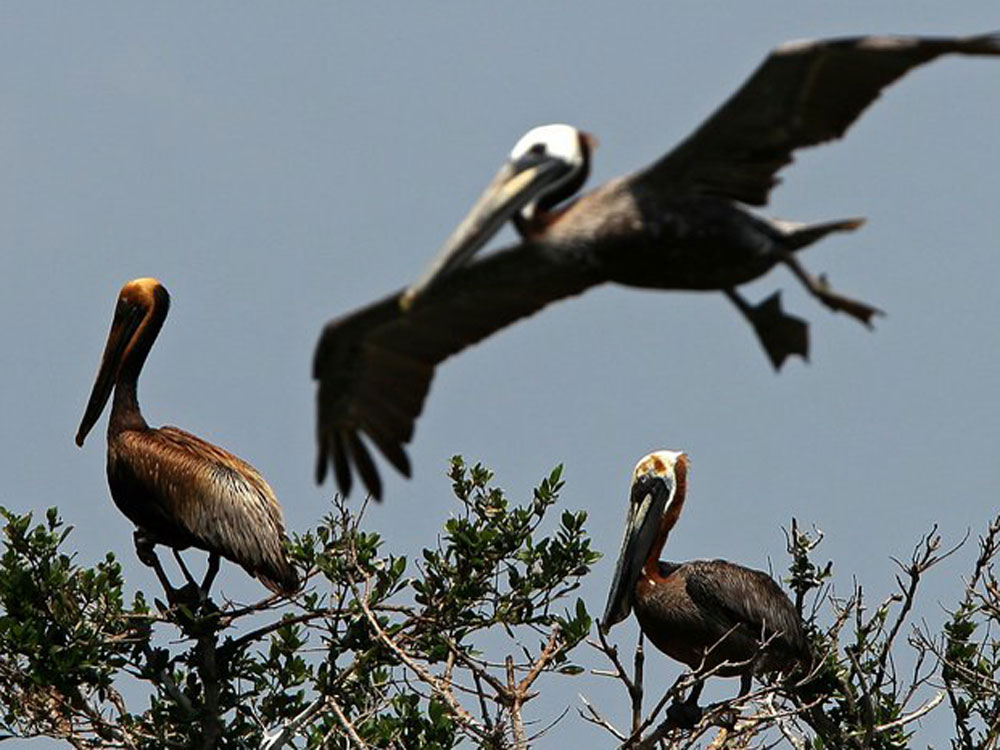 "I like to kind of refer to it as a demon sitting offshore lurking -- some kind of evil nemesis waiting to come and impact," says Michael Carloss, biologist director for the Louisiana Department of Wildlife and Fisheries. "We're just getting small tastes of it. That's the scary part."

Biologists say they have seen pelicans desert the areas where oil has shown up, but not nesting islands like Queen Bess, the nesting ground of about 3,000 birds.

"Parental instinct is extremely strong, and these birds are going to stay around this island," Carloss says.

He points out birds that look like they have been dipped in gooey tar -- some floating awkwardly on the water and one on the shore.

"With the sunlight, you can see it glistening," Carloss says. "He's caked up pretty good."

Increasing numbers of pelican parents are getting coated when they dive into the water to fish. If they make it back to the nests and spread the oil, it can be deadly for eggs. More and more parents are not making it back. Without a parent, no stand-in will incubate an egg or feed a chick.

Back From The Brink

Carloss knows how helpless chicks are. When he was a teenager some 30 years ago, he fed hundreds of them until they could fly. They had been brought from Florida to help bring the birds back to Louisiana. Pelicans are the state bird, but there were none left here four decades ago. Now there are about 100,000.

So far, the oil has spared some nesting islands. Many healthy-looking birds soar around the islands where oil has hit. But the flimsy-looking bright-orange booms that surround the island have let a lot of oil through.

Since April, Carloss has begged in vain for more effective booms.

Now he has joined a small force of biologists rescuing oiled birds. Rescuers don't want to grab a bird that might still be able to feed a chick, so they only take the ones that can't fly.

"They're at a point where if they stay out much longer, they'll essentially starve to death," he says.

Biologist Kathleen Paulette, one of the bird catchers, has been handling suffering birds for days. She's so upset, she breaks down when she talks.

To catch them, the biologists plunge into the water with nets at the ready. Some try to escape, but most of the birds are caught in moments.

"Well, they are so oiled they don't really fight," Paulette says, choking back tears. "So you just make sure they can breathe and get them in a box and get them to where they can be washed off."

The pelicans are transported by boat to a warehouse-turned-bird bathhouse near Venice, La.

First, they are rubbed with cooking oil to loosen the sticky petroleum. Then, they are sprayed with a concentrated solution of Dawn dish detergent. It takes three people about 45 minutes to clean each pelican.

Biologists believe most oiled birds will never be found. For every adult saved, a tragedy is left behind.

"The birds with the white heads are the adults, so they may have babies, so if they're here that means the babies are going to die," says Jay Holcomb, who directs the International Bird Rescue Research Center.

He says these birds should do OK. Other adults will be too busy feeding their own young to take on orphaned chicks, he says.

The federal government has just started releasing some of the cleaned birds off the coast of Florida. It hopes the parents do not try to fly back to their nests in Louisiana's oily waters.