Accessibility links
Consultant Says Utah Mine Had Previous Collapse The cave-in last week was the second such collapse at the mine this year. Another cave-in occurred in the spring in the same general area where six miners are now trapped. 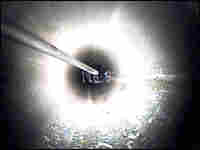 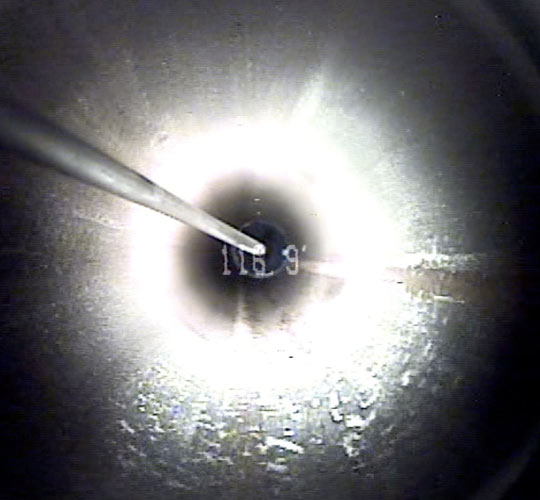 In this video frame grab released by Murray Energy Corp, a camera travels through a hole drilled at the Crandall Canyon Mine.

The cave-in at a mine in Utah last week was the second such collapse there this year. Another cave-in occurred in the spring in the same general area where six miners are now trapped.

According to a consultant's memo, the earlier incident was so severe that the company had to abandon that part of the mine.

In mining lingo, it is called a "bump," but it is more like an explosion as the floor buckles and coal shoots out from the pillars that hold up the ceiling.

"If you're close enough to it, you could be thrown up and hit the roof," said Robert Ferriter, who runs the mine safety program at the Colorado School of Mines. "You could be inundated when the pillar failed, with all kind of coal and dust flying around all over the place."

Utah's Crandall Canyon mine suffered a similar bump in March. Although the mine owner denies it, by most accounts the miners had been removing pillars of coal.

It is a technique commonly known as retreat mining. According to a consultant's memo, the March collapse at Crandall was caused by coal pillars that could not handle the pressure.

After the March bump, the company — Murray Energy Corp. — moved to another part of the mine, about nine hundred feet away. But Ferriter said working that section appeared risky as well.

Numerous pillars had been removed nearby and entire stretches of roof had caved in.

"I would not feel comfortable doing that myself. You're mining in a high stressed area, so that would give you things like crushing pillars and floor heave and eventually you could cave the whole thing," he said.

Ferriter is not the only mining engineer who wondered about the company's decision to work that area.

Larry Grayson, a professor who teaches mine engineering at Penn State said he was also surprised.

Grayson himself had done retreat mining – removing pillars of coal – in the 1980s.

"In my day, it was our rule ... (that) we would not do retreat mining between two caved areas," he said.

But Grayson was hesitant to second-guess the mine owner. He said mining companies today can use sophisticated computer models to figure out just how much stress pillars can take.

The consultant on the Crandall mine – a firm called Agipito - recommended using larger pillars in the new area to support the roof. According to maps, the company was doing that.

At a news conference on Monday, Robert Murray, the mine co-owner, dismissed concerns about the mining method.

"Our mining plan was recommended by Agipito, was approved by the federal mine safety and health administration," he said. "This was a completely safe mining plan."

Following the news conference, the federal mine safety agency appeared to back Murray. Bob Friend, the agency's deputy assistant secretary, said he had read the mining plan.

"There's nothing glaring out at me as inappropriate," Friend said.

Meanwhile, crews were drilling a third hold Tuesday in an effort to reach possible survivors from the mine collapse. Earlier, they drilled a two other holes and fitted a camera down one of them, but they have yet to learn the fate of the six coal miners, eight days after the mine partly collapsed under the weight of a shifting mountain.

The camera's ghostly images revealed only one indication of a miner's presence: a tool bag for hammers, wrenches and chisels hanging from a post, 3.4 miles from the entrance and more than 1,800 feet underground.

"It indicates we're very close to where the miners were working," said Murray.