Accessibility links
Vatican Celebrations Overshadowed By Scandals Pope Benedict will address Catholic clerics from around the world at the Vatican during ceremonies marking the end of the church-designated "Year for Priests." Much attention will focus on what the pope says about the stream of child sexual abuse scandals that have been rocking the Catholic Church in recent years. 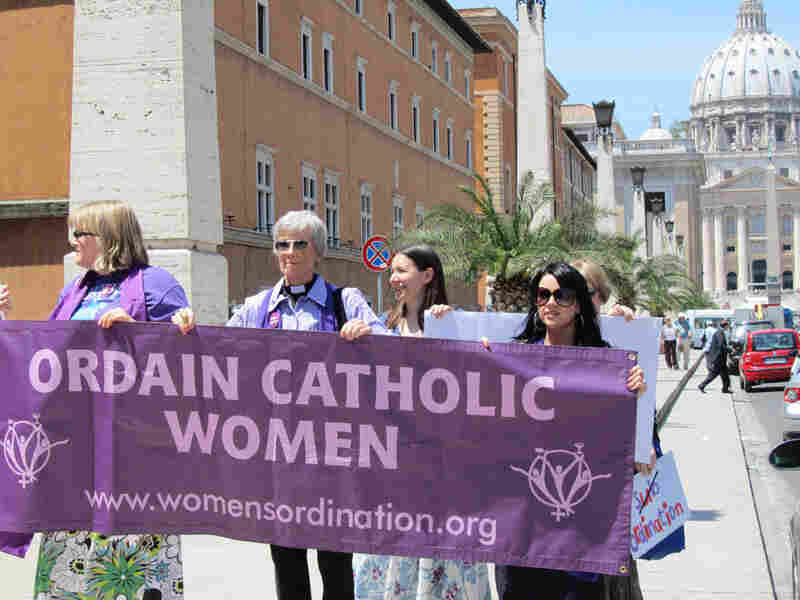 Representatives of the U.S.-based Women's Ordination Conference protest in front of St. Peter's Basilica at the Vatican. The group's executive director said the Vatican has turned a blind eye to male priests who "destroy the lives of children and families, but jumps at the chance to excommunicate women." Sylvia Poggioli/NPR hide caption 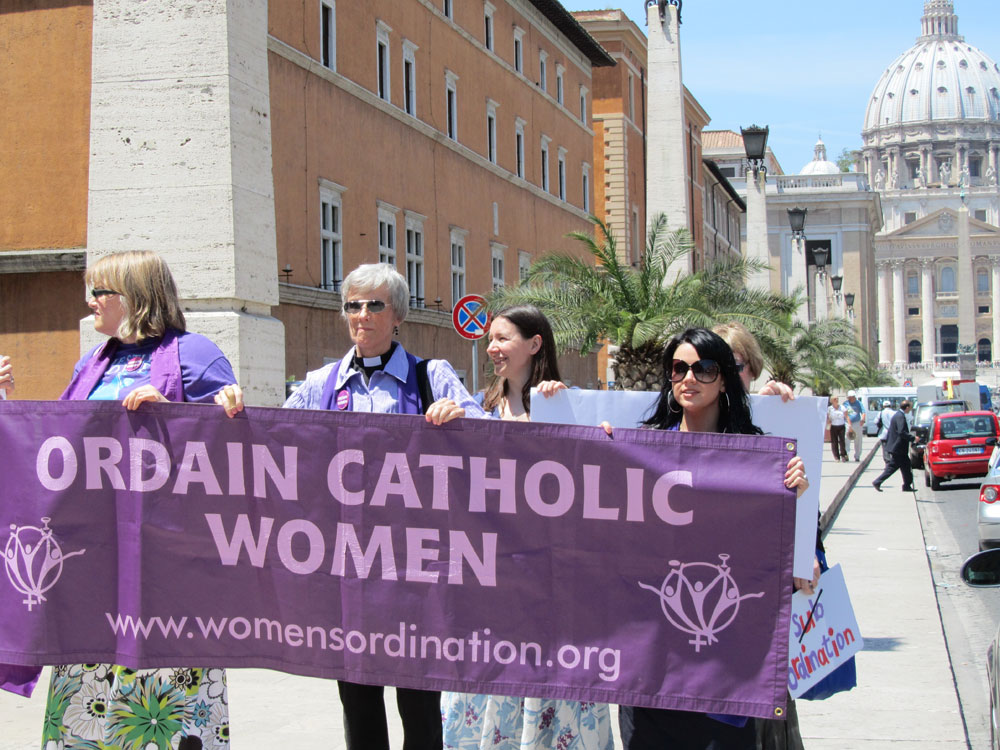 Representatives of the U.S.-based Women's Ordination Conference protest in front of St. Peter's Basilica at the Vatican. The group's executive director said the Vatican has turned a blind eye to male priests who "destroy the lives of children and families, but jumps at the chance to excommunicate women."

Thousands of Roman Catholic clergy are in Rome to mark the end of the church-designated "Year for Priests." But the celebrations are overshadowed by the worldwide clerical sex abuse scandal. Catholic activists also are in Rome demanding radical changes and a moral reckoning by Pope Benedict XVI.

Welcoming priests from all over the world, the Vatican No. 2, Secretary of State Cardinal Tarcisio Bertone, said revelations of hundreds of cases of clerical sex abuse show the need for spiritual renewal.

"The Holy Father and I have had to acknowledge the pain caused by the infidelities -- some very serious -- committed by some members of the clergy that have had a negative impact on the church's credibility," Bertone said. "The pope has even spoken of a persecution not from the outside but stemming from sins within the church."

Only 24 hours earlier, a group of American, German, Canadian and English women marched in St. Peter's Square and chanted their demands that women be ordained.

They wore purple stoles -- the symbol for female priests; some even had Roman collars. Their protest lasted about a minute before Vatican police made them leave.

Earlier, the women had denounced the Vatican for honoring priests while the clerical sex abuse scandal is raging.

"The Vatican is all too happy to turn a blind eye when men in its ranks destroy the lives of children and families, but jumps at the chance to excommunicate women who are doing good works and responding to injustice and the needs of their communities," said Erin Saiz Hanna, executive director of the U.S.-based Women's Ordination Conference.

Under church doctrine, women who attempt to be ordained are automatically excommunicated.

Another U.S. group has converged on Rome -- members of SNAP, the Survivors Network of those Abused by Priests. Spokesman Peter Isely said survivors are expecting an apology by the pope to the world, and the announcement of moves to rectify crimes committed by priests against minors.

Isely acknowledged that some victims are skeptical, while others "expect that this pope this week is going to make a dramatic, historic announcement that is going to change the future of the Catholic Church forever," Isely said.

-- That the pope immediately order all Vatican officials, cardinals, archbishops and bishops to turn over all criminal evidence and abuse files to local law enforcement.

-- That Benedict give a full account of his actions in sex abuse cases while he was archbishop in Munich, and later when he was the top doctrinal watchdog at the Vatican.

-- That the canonization process of Pope John Paul II be halted until there is a full independent investigation of whether the late pope was involved in cover-ups of Catholic clergy.

"These clerics and priests that assaulted us may have stolen our bodies, but it is the bishops and archbishops and cardinals and the popes who stole our voice," Isely added.

There are two Pope Benedicts, according to Isely. One first dismissed the revelations as idle gossip. "But then there is the other Pope Benedict, and this is the one we are hopeful about, the one that said there is no forgiveness without justice," Isely said.

Many Vatican watchers wonder what, if anything, Pope Benedict will say in ceremonies Thursday and Friday about the scandal that has reached the Vatican's doorstep.

In his March pastoral letter to Irish faithful, the pope made a heartfelt apology for years of sexual abuse of minors by Irish priests, and he has had several moving encounters with various victims.