Accessibility links
Monitoring Conflict Minerals: Who's Accountable? The Senate recently passed a bill blocking the import of "conflict minerals," and the House is working on its own version. The Conflict Minerals Trade Act would require the U.S. government to map all mines in Congo and identify which are controlled by militias. 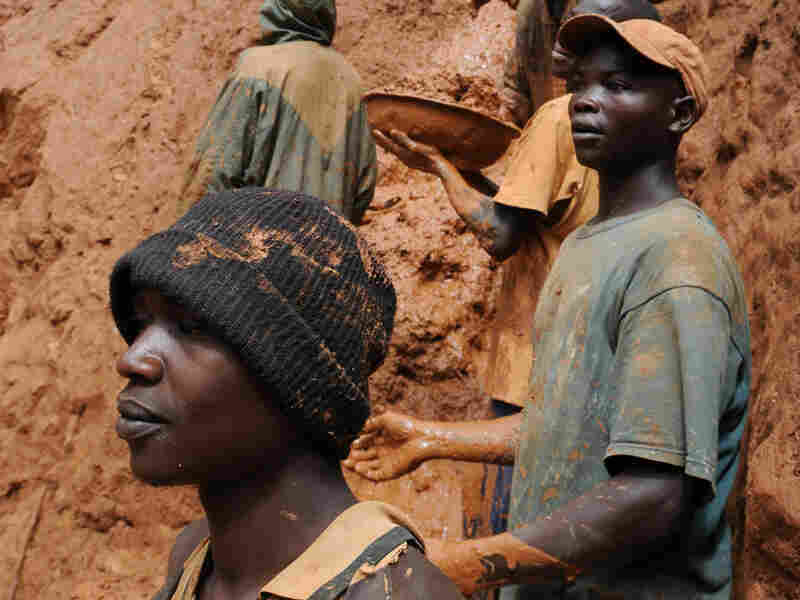 Gold miners stand on a muddy cliff as they work at a northeastern Congo mine in February 2009. Activists want the U.S. government to identify militia-controlled mines in the Congo. That way, critics say, businesses will have to be responsible for their supply chains. Lionel Healing/AFP/Getty Images hide caption

The term "conflict diamonds" may sound familiar -- that is, diamonds mined in a war zone and often sold to buy weapons.

But how about "conflict minerals"? That is what activists are calling elements like gold, tin and tantalum, used in computers and cell phones. These minerals also come from mines in war-torn countries.

The Senate recently passed a bill blocking the import of conflict minerals, and the House is working on its own version. But some businesses think a legislative solution won't work.

Mining takes place in muddy holes in the hills of the Democratic Republic of Congo. Dozens of men -- and often children -- dig with picks, shovels and hands under the watchful eyes of armed guards. The areas that Portland, Ore., activist Lisa Shannon has visited are far from any town and in the middle of a war zone, where millions have died. Shannon, of the campaign RAISE Hope for Congo, says the system is corrupt.

"You have either sort of public mines and militias come and collect taxes at the mines, or they mine them themselves, or they control locals and have them mine on their behalf," Shannon says. "And then they export illegally, very cheaply. And then those minerals are smuggled out through countries like Rwanda and Uganda and eventually make their way into smelting plants, where they're mixed with minerals from other locations and then they end up in our tech products."

A recent demonstration took place just outside Portland, across the street from an Intel chip manufacturing plant. Shannon participated with about two dozen protesters carrying placards and pennies. Among them was Ann Shannon, Shannon's mother.

Don't tell me that no American consumer is willing to pay a penny a product to save human lives and keep the Congolese blood and suffering out of our computers.

Ann Shannon, a participant in a recent protest against Intel Corp.

"Don't tell me that no American consumer is willing to pay a penny a product to save human lives and keep the Congolese blood and suffering out of our computers," Ann Shannon says.

Demonstrators were pushing for swift passage of the Conflict Minerals Trade Act, which has been lumped together with the financial reform package moving through Congress. The trade act would require the U.S. government to map out all mines in Congo. The Commerce Department would then have to figure out which ones are being controlled by militias and which ones are not. That way, protesters say, businesses will have to be responsible for their supply chains.

The protesters gathered outside Intel because they claim the company is trying to gut the act.

But even Shannon admits the action against Intel is a hard sell because Intel is one of a handful of businesses that have actually tried to do something.

"They started a third-party audit program for the smelters of tantalum for their supply chain. And that was a huge step forward, and it was amazing,” Shannon says. "I was very disappointed last week when I was in D.C. and learned they had been so heavily involved in the lobby effort to gut the bill."

Intel spokesman Chuck Malloy says the company is not trying to gut anything. He says Intel is neither supporting nor opposing the act. But he says after working for years across many different countries to clean up their tantalum supply, Intel has come up with a better fix.

"We think we've identified a link in that supply chain, at the smelter level, that we can insert an audit process to ensure that the source of the material isn't a conflict area," Malloy says.

The idea would be that if enough companies were to band together to demand conflict-free minerals, smelters in China and elsewhere would be forced to clean up their supplies.

It's a "power of the purse" over the "power of legislation" kind of argument.

Meanwhile, the group Global Witness, which tracks links between natural resources and conflicts, wrote to 200 businesses to see what they are doing about this issue.

Most had absolutely no system to vet their supplies.