Accessibility links
New Orleans Oyster Processor Runs Out Of Oysters Wildlife officials closed an area in the Gulf where oysterman Mitch Jurisich has been farming oysters for years. He sold them to Al Sunseri, president of P&J Oyster. The other six or seven oystermen Sunseri normally buys from had already been shut down by the spill -- Jurisich was his only source left. 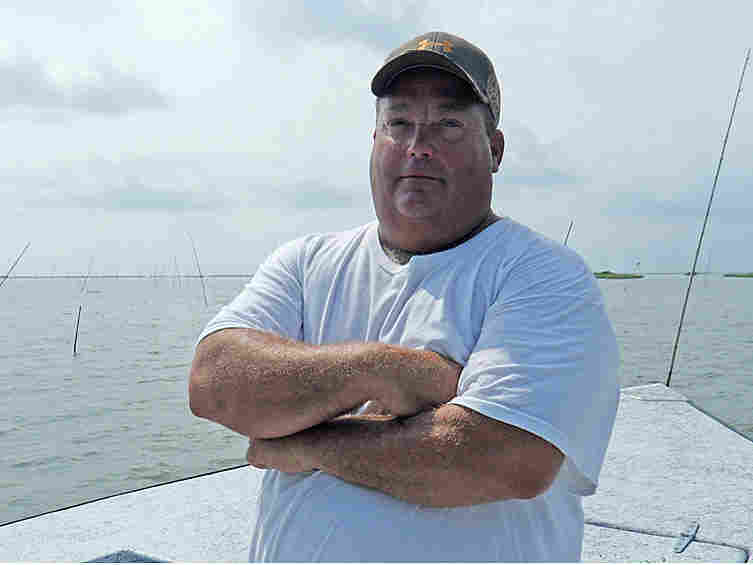 After oysterman Mitch Jurisich spotted oil earlier this week in Bayou La Chute, wildlife officials told him he had to close his beds. He says he's never wanted to do anything else -- but this may be the end. Tamara Keith/NPR hide caption

The fallout from the BP oil spill continues to ripple through the Gulf economy. This week, it caught up to P&J Oyster Co. in New Orleans.

The owners say it's the oldest continuously operating oyster processor in America. But thanks to the oil, they now have no oysters to process.

Oysterman Mitch Jurisich first spotted oil floating on the water above his beds at 7:30 in the morning. It was just yards away from where his grandparents first settled after emigrating from Croatia almost a century ago.

"This is the last of our areas that we had open from our family to harvest oysters," Jurisich says. "We were fortunate enough to have one little slice of pie left that we were still farming from, and that slice of pie now is gone."

Jurisich had hoped somehow the oyster beds his family has leased and farmed for so many years would be spared. Maybe his grandmother was watching over them.

"Everything we've worked so hard our whole life to build could be done for. It's not the way we like to think, but when you start seeing it, you know reality is here now, you know," he says.

Jurisich has the deep dark tan that comes from a lifetime on the water and knows every inch of Bayou La Chute.

"Sad part is, all my life I've been out here, so I've never wanted to do anything else," he says. "And you know, I'm not a welder, I'm not nothing. I'm an oysterman."

Out at his beds, Jurisich looked at the water and saw rust-colored, "fudgy" oil. "It's disgusting," he says.

As soon as he saw the oil, he called wildlife officials, who quickly closed the area to fishing -- making official what he already knew.

Then he called his friend Al Sunseri, the president of P&J Oyster.

The other six or seven oystermen Sunseri normally buys from had already been shut down by the spill. Jurisich was his only source left.

"I was planning to get product from him," Sunseri says from his office in the French Quarter. The oysters were supposed to be delivered on Tuesday. "So that just cuts off that last bit of the group that we're able to get our oysters from."

Sunseri, who seems to be on the phone constantly, tells his contact at one of the grocery stores he supplies that it was the last day his company will be shucking oysters.

"We don't have any prospects to get anything else in to shuck," he says. 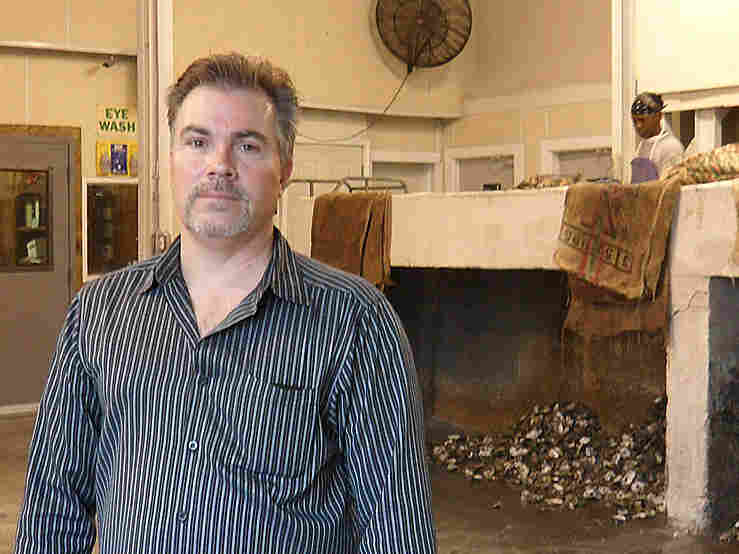 Al Sunseri, president of P&J Oysters in New Orleans, had to stop shucking oysters this week. All of the oystermen who sold to him have been shut down because of the oil spill. Tamara Keith/NPR hide caption

About a dozen workers, almost all women, stand up on platforms splitting open the last of Jurisich's oysters with a hammer and knife. They pull out the meat and drop the shells on the ground below. Sunseri has told them this is probably their last day, maybe just for a while, maybe forever.

For 42-year-old Wayne Gordon, it's the only job he's ever known. Sunseri's father hired him fresh out of high school.

This industry survived Hurricane Katrina and all the storms that came before it. But this man-made disaster could be more than these generations-old businesses can handle.