Accessibility links
Gas Station Owners Pay The Price For BP Affiliation The anger against BP has prompted some protesters to picket in front of BP-branded gas stations. But BP sold off its retail gas business, so the 13,000 BP gas stations are generally independent franchisees. Betty Camacho, who owns a station in suburban Washington, D.C., says she has fought with BP and had tried to get out of her contract before the spill. And now it's really costing her. 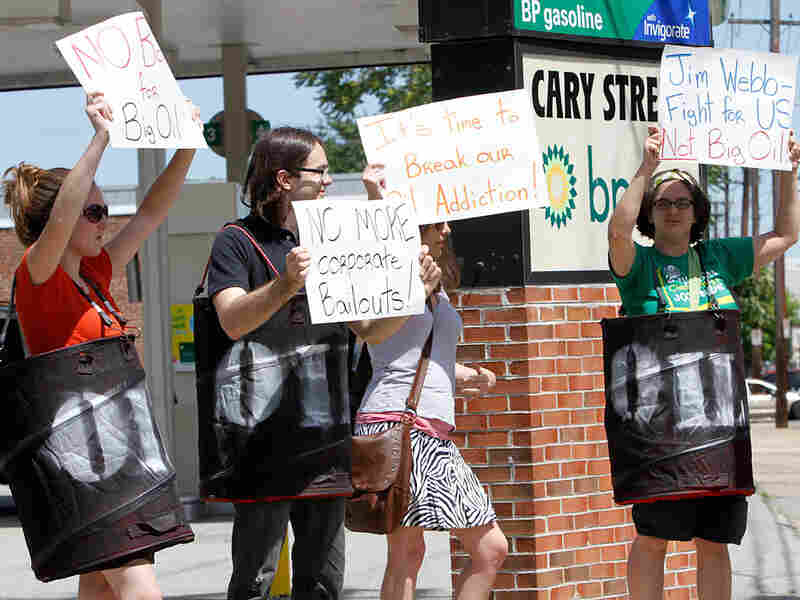 Protesters march in front of a BP gas station in Richmond, Va., on Tuesday. But what many might not realize is that BP sold off its retail gas business, so the 13,000 BP gas stations are generally owned by independent franchisees. Steve Helber/AP hide caption 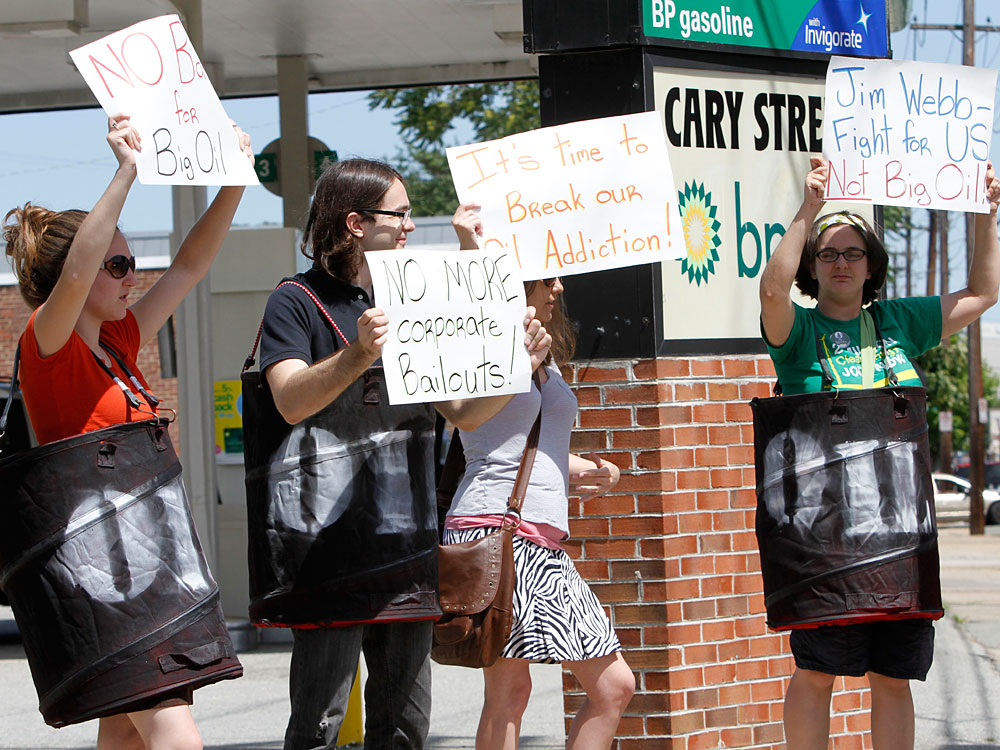 Protesters march in front of a BP gas station in Richmond, Va., on Tuesday. But what many might not realize is that BP sold off its retail gas business, so the 13,000 BP gas stations are generally owned by independent franchisees.

Five years ago, the chance to buy a gas station and a busy repair shop from BP seemed like an opportunity for Jose and Betty Camacho.

The husband and wife figured that the well-traveled stretch between Washington, D.C., and its Maryland suburbs should generate lots of business. They own their business, but are franchisees. By contract, they must buy their gas from BP until 2020.

Now that affiliation is causing problems.

The anger against BP has prompted some to picket in front of BP-branded gas stations. Jesse Jackson has called for a BP boycott. But BP sold off its retail gas business. Now, the people who own the 13,000 BP gas stations are generally independent franchisees, like the Camachos.

Betty Camacho says people associate her independent business with what's happening in the Gulf of Mexico. "I can see my volume is not the same," she says. "I can see that they are not coming."

Volume dropped from 88,000 gallons a month to 70,000, she says. An irate customer recently told her he didn't want to buy BP gas but had no choice because he'd run out.

"Otherwise I would not stop here, because I know that you represent a company that is messed up," the customer said.

The Camachos find it ironic that they should pay the price for their affiliation with BP.

Betty Camacho says she's fought with the company, mostly over its rules.

She says BP typically charges several cents more per gallon than wholesale market rates. Also, BP requires the station to run all gas-related credit card payments through BP's processing system. She says that hamstrings her shop's cash flow because the money doesn't post to their account until seven days later.

BP spokesman Jon Pack says the prices it charges franchisees for gas is based on supply and demand. He added that BP supports its affiliates. And he confirmed that the company so far hasn't offered any financial support.

Before the spill, the Camachos had tried to get out of their contract. But Betty Camacho says the legal fees were too high. And now the business faces a cash crunch. To demonstrate this, she produces her latest business account statement. She has a negative balance of $9,623.88.

In search of money, she goes to an ancient-looking safe behind the cash register. She pulls out three envelopes and starts to count.

She's short $9,000, and looks distraught. She says she sometimes uses her credit card to borrow money, but it's maxed out. Reluctantly, she says there's only one place left to turn: her brother.

"I know how much love my family show me. So first always I'm always looking on my credit cards before I make that phone call," she says.

With downcast eyes, she makes the call. She explains her cash-flow problem -- and her need for a short-term loan. He tells her he'll bring her a check.

Camacho is relieved, at least for today. But if consumers continue steering away from stations like hers, it's not clear how much longer the business can survive.