Accessibility links
Do's And Don'ts For The Great American Garage Sale The most advanced garage sale goers know the game is not for the weak. Commentator Laura Lorson, a self-proclaimed connoisseur, discusses the art and etiquette of shopping on someone's lawn. From early-birding to haggling she breaks down the summertime tradition. 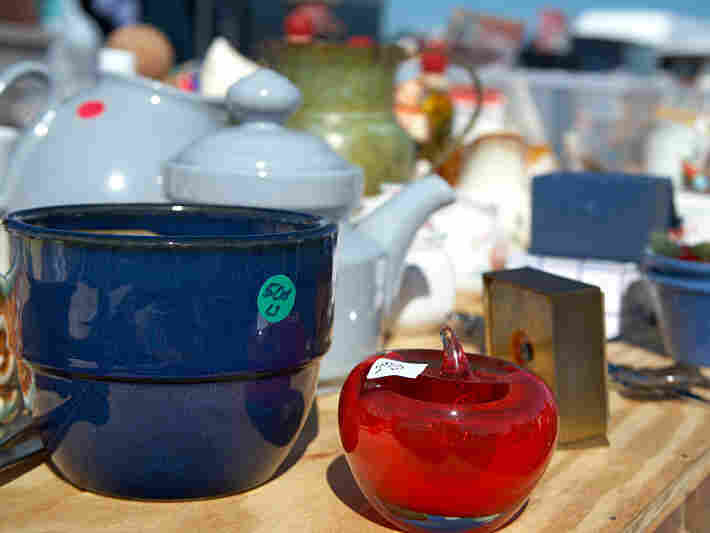 Garage sales are great. You get to paw through people's stuff! You can even buy it! How cool is that? iStockphoto.com hide caption 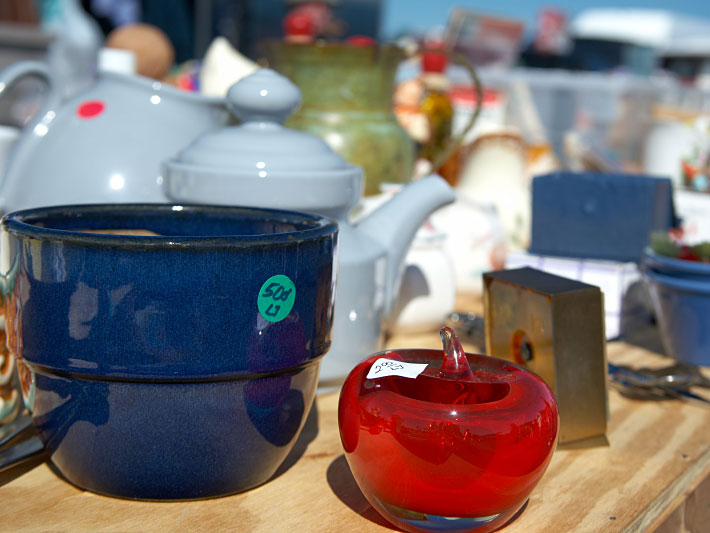 Garage sales are great. You get to paw through people's stuff! You can even buy it! How cool is that?

Laura Lorson is the producer, editor and local All Things Considered host for Kansas Public Radio.

Summertime is upon us. It's the time of melting makeup, maddening music coming from ice cream trucks and that particular brand of lawn Armageddon that is known as the Slip 'n Slide. In case you didn't know, it's also the time of the garage sale. I can't imagine how you wouldn't know. Have you ever met anyone who says he hasn't been to a garage sale? Because that person is lying.

Garage sales are great ... even the ones that are nothing but stained baby clothes and Diaper Genies and broken George Foreman grills. You get to paw through people's stuff! You can even buy it! How cool is that?

I myself became a connoisseur because my mother loves garage sales. I think it's because in my family, every gift, every acquisition, every new thing that comes through the door comes with its own play-by-play and color commentary.

Getting things at garage sales means there's a whole lot more to tell, from its cost to its condition to the people you ran into at the sale. This is the sort of thing that drives my husband completely nuts, and is something I have to guard against to preserve my marriage ... because I find myself, just like my mother, spieling out some protracted story with every single purchase, the punch line to which is always, "Guess how much I paid! ... Do you know how much this thing is worth?!?" To which the answer is always, "Well, if you paid a quarter for it, then it is in fact worth a quarter."

But that is just being mean, and missing the point of the garage sale experience, to which there are an etiquette and formalism that rival the Japanese tea ceremony.

There is no ridiculous outfit, no creepily personal hygiene device offered for sale, no insane wall art featuring owls made of macrame, wire and brass brads that it is OK at which to snicker.

For example: Early-birding is common, but in my neighborhood, it's considered bad form. (Early birds are the people who show up before the garage sale is supposed to start.) Strangely, objecting to early birds circling the driveway like vultures or actually ringing your doorbell at 6 in the morning is also considered bad form.

There is a ritual for haggling, the analysis of which is worthy of doctoral dissertations. People expect you to discuss pricing -- but that's only within certain limits. If an apparently worthless item is priced very high, the person probably does not really want to sell it. You have to tread lightly in this situation. If you offer, say, a buck for the rust-stained, dog-chewed machine-made comforter that is being billed as a "handmade quilt" for which they're asking $150, that would be considered rude. It's also considered out of line to haggle over extremely low-priced items.

I was at a sale the other day where some person was selling a whole bunch of go-cups with college logos on them for a dollar a box. There were maybe 30 boxes of these cups, 75 cups to the box or so -- like maybe at some point these people either ran a concessions company, or maybe they just went through a phase where they only ate at stadiums; I don't know what that was all about. 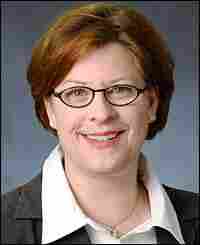 I rummaged through a couple of these boxes, hoping against hope to find some kind of ephemera from some extremely obscure or oddly named college mixed in there, because I like that sort of thing. No such luck. And besides, they hadn't been washed -- ewww! -- so there were dried splatters of cola and such inside them. Anyway. A woman wearing stretch pink pedal pushers and with a shocking pink pedicure offered the owner a dime a box. The scorn radiated off the owner in a palpable, laser-focused wave, like that blast of sound that came out of the monolith in 2001: A Space Odyssey.

I had to get out of there before I started laughing at this standoff over, essentially, the relative desirability and cost of a particular category of dirty dishes. Because laughing? Also rude.

There is no ridiculous outfit, no creepily personal hygiene device offered for sale, no insane wall art featuring owls made of macrame, wire and brass brads that it is OK at which to snicker. It's just not done. The most advanced salers know the game is not for the weak: You have to have stamina, and strength, and the ability to look serious and contemplative when confronted with the truly bizarre ephemera of our nation.

It is the great game of America, this time of year, sifting through garage sale items, picking up that obscure object of desire at a discount, trading little bits of our history back and forth, telling each other our stories through used Fisher-Price toys and yogurt makers and old Christmas presents that we loved with all our hearts until we forgot about them in our blinding rush toward wherever it is that we're going.