Accessibility links
East Coast Tourism Gains At Gulf's Expense As images of the oil spill continue to dominate news coverage, many nervous travelers are canceling plans to visit the Gulf of Mexico and looking east instead. While they don't want to sound too mercenary about it, East Coast beach resorts and hotels are happy to accommodate them. 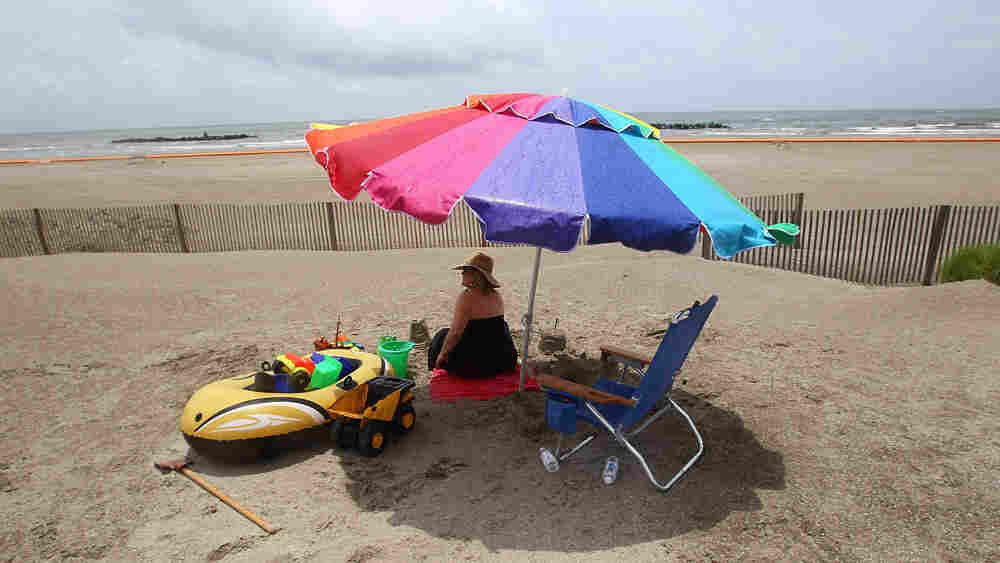 Millie Eichler sits behind a fence prohibiting people from using the public beach because of oil coming ashore June 5 in Grand Isle, La. As vacationers worried about oil cancel their plans to visit the Gulf shore, some are looking to the East Coast instead. Win McNamee/Getty Images hide caption 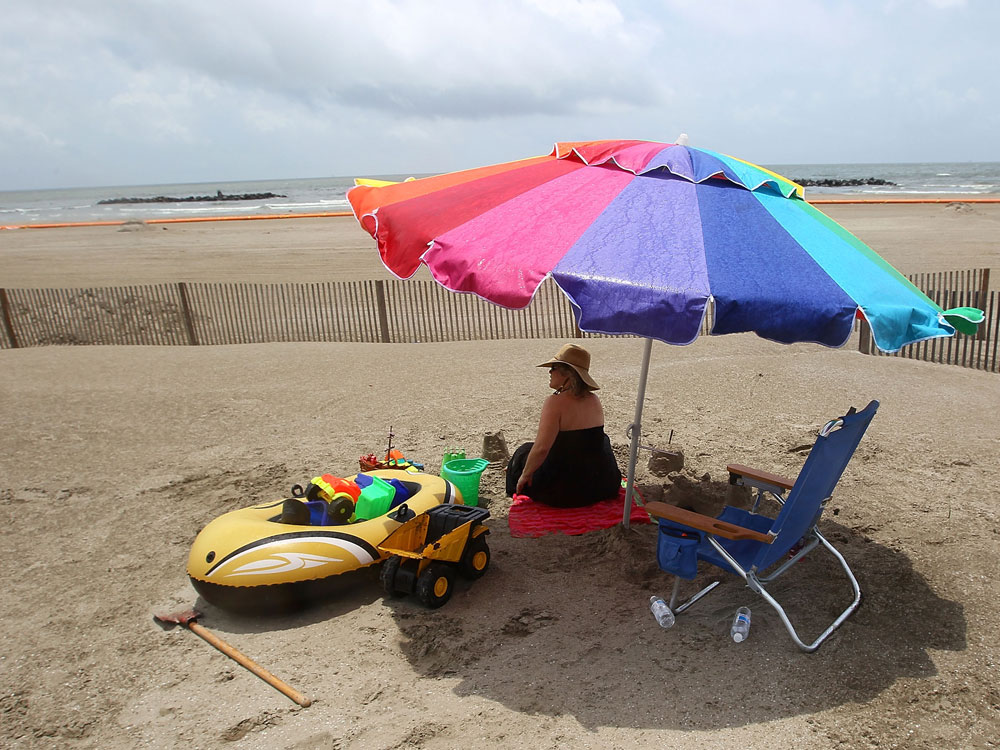 Millie Eichler sits behind a fence prohibiting people from using the public beach because of oil coming ashore June 5 in Grand Isle, La. As vacationers worried about oil cancel their plans to visit the Gulf shore, some are looking to the East Coast instead.

As vacationers worried about the sight, smell and feel of oil cancel their plans to visit Gulf shore beaches, some are looking to the East Coast for alternatives. And while they don't want to sound too mercenary about it, people in the tourism business along the Georgia and Carolina coasts are happy to welcome them.

"The call volume here has shot up dramatically," says Tom Ridgway, owner of Hilton Head Rentals and Golf in South Carolina, which rents out vacation homes and villas. "I would say anywhere from 20 to 30 percent are calls from people along the Gulf shore states that are now seeing their vacations threatened."

There's at least one hotel in Miami offering an "oil spill special," giving steep discounts to travelers who have canceled plans to visit the Gulf of Mexico. But most members of the hospitality industry along the East Coast are striving to avoid such blatant appeals.

"We have not taken advantage of the opportunities that have come along, offering great deals -- what I call ambush marketing," says Bill Tipton, executive director of the Brunswick-Golden Isles Convention and Visitors Bureau in Georgia. "It could be us just as easily."

Worries Expand Along With The Slick

That number has climbed steeply from Knowland's earlier surveys about the oil spill's effects. The latest survey also suggests that many hotels are having trouble getting groups to book ahead. 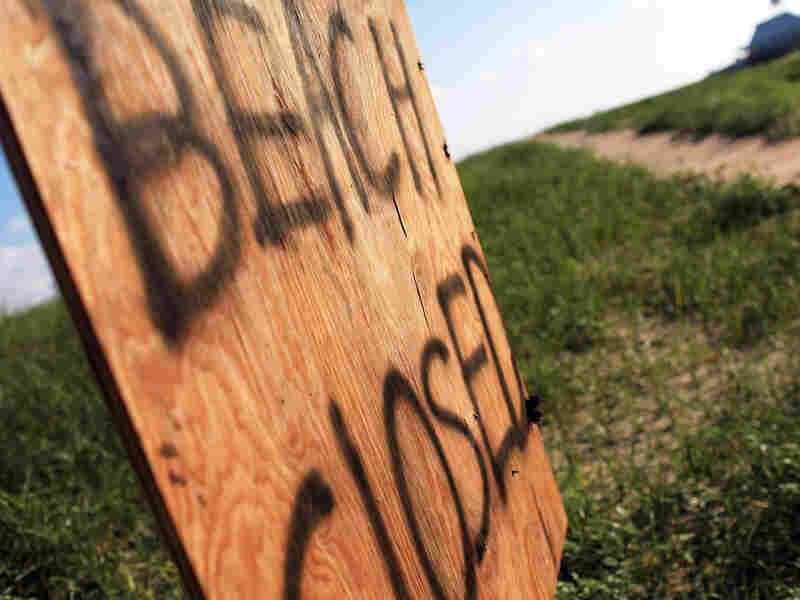 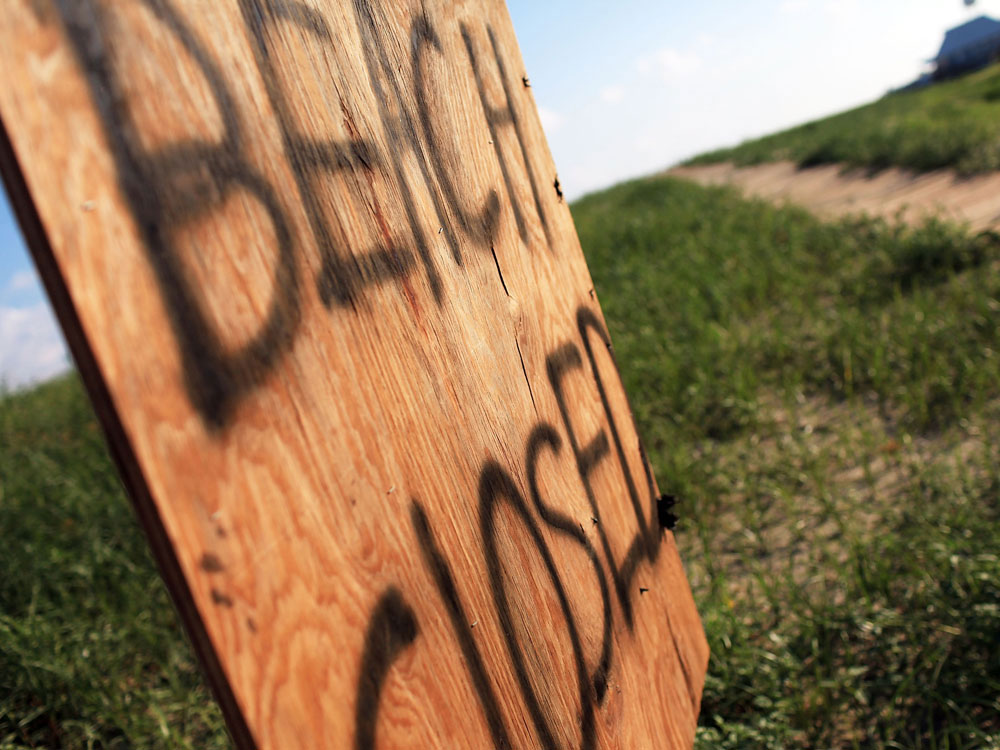 A sign of the times in Grand Isle, La.

"They're really concerned about the next three to six months and then for up to a year," says Tom Crosson, Knowland's spokesman. "Some of these large events get planned a year ahead of time, and those concerns are only going to expand as the oil spill does."

"There's a big regatta in Key West with 500 racing boats that's looking at the whole situation," says Blake Fleetwood, a travel agency owner in New York City. "That's not until January, but they're nervous now."

No Oil, No Matter

Fleetwood says he just had a large group move its tennis trip to a South Carolina resort, "even though they were going to the Longboat Key area [in southwest Florida], which might not be affected by the oil spill."

Hotel owners and other businesses along Florida's Gulf Coast are especially frustrated that they're seeing a lot of cancellations even though oil has not come farther east than parts of the Panhandle.

BP, the company whose rig exploded in the Gulf nearly two months ago, has given the state of Florida $25 million for tourism advertising.

"St. Pete Beach and the state and Pinellas County are aggressively trying to market to let customers know that the oil spill hasn't affected our beaches," says Steve Springman, general manager of the Holiday Inn SunSpree Resort in St. Petersburg.

There are now several Web cameras set up along St. Pete Beach -- a common tactic all along the Florida coast these days. The visual proof that no oil is in the neighborhood is not always enough, however, to convince wary travelers that the local beaches will remain a safe bet.

Many Gulf Coast hotels and resorts have implemented 24-hour cancellation policies. That may reassure some guests that they can wait and see about conditions when they matter, but others are taking advantage of the fact that they won't lose their deposits by taking their business elsewhere.

"Most of it is shorter turnaround than normal," says Tipton, the Georgia Sea Islands tourism official, referring to the last-minute bookings his area is seeing. "They're making decisions as they're watching the news."

Where Will The Oil Go?

Those looking forward to beach vacations are paying closer attention to the oil spill news than most people, Tipton says -- just as potential travelers to Europe have gained an interest in volcanic activity that they might never have had before this year.

"When people are making reservations, you sense a little desperation in their voices," says Ridgway, the Hilton Head rental company owner. "People are pretty anxious at this point."

But are they making the right choices?

Tom Aposporos, president of the Longboat Key Chamber of Commerce, admits it's "cold" to suggest as much, but he says loop currents and the West Florida Shelf may combine to protect southwest Florida from feeling the effects of the spill directly.

"The irony," he says, "is that those who may be canceling vacations along the southwest coast of Florida and staying on the east coast of Florida, Georgia or North Carolina may be going where the oil will end up."