Accessibility links
Mattel Recalls More China-Made Toys Toy maker Mattel has announced another round of toy recalls. It's the second time this month that the company has withdrawn toys made in China. Tuesday's announcment covers some toys that contain lead paint, and some have small magnets that can be swallowed.

Toy maker Mattel has announced another round of toy recalls. It's the second time this month that the company has withdrawn toys made in China. Tuesday's announcment covers some toys that contain lead paint, and some have small magnets that can be swallowed. Don Mays of the Consumers Union talks with James Hattori. 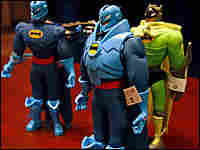 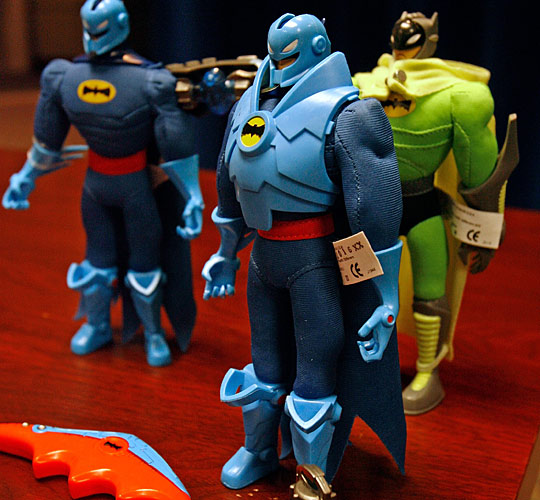 Mattel Inc., is recalling 9 million toys — including these Batman action figure sets — because of safety concerns.

Toy maker Mattel Inc. on Tuesday issued a recall for 9 million toys made in China because they contain magnets that can be dislodged and swallowed, or they may contain lead paint.

Nancy Nord, acting chairman of the U.S. consumer Product Safety Commission, said no injuries have been reported with any of the products involved in the recall.

"The scope of these recalls is intentionally large to prevent any injuries from occurring," she said at a mid-morning news conference.

Mattel chief Bob Eckert said the company is working to create stringent safety standards and is conducting independent tests of its toys to ensure they are safe. After Mattel announced the recall of its Fisher-Price toys, it launched a full-scale investigation into all of its factories in China.

Mattel is offering consumers replacement products in exchange for the recalled items.

It is the second time in less than two weeks that Mattel has recalled toys made in China. The company's Fisher-Price division recalled 1.5 million preschool toys from a different Chinese supplier earlier this month because of lead paint. The toys featured characters such as Dora the Explorer, Big Bird and Elmo. About 967,000 of those toys were sold in the United States between May and August.

Nord said Mattel discovered the latest problem while they were investigating the earlier recall. At Tuesday's news conference, she warned that home test kits are not a reliable way to determine the presence of lead.

After the Fisher-Price recall, Chinese officials temporarily banned the toys' manufacturer, Lee Der Industrial Co., from exporting products. Cheung Shu-hung, one of the company's co-owners, committed suicide at a warehouse over the weekend, a state-run newspaper reported Monday.

Lee Der was under pressure in the global controversy over the safety of Chinese-made products, and it is common for disgraced officials to commit suicide in China.