Accessibility links
U.S., Allies Slowly Launch Effort To Tame Kandahar Thousands of U.S. troops are heading into southern Afghanistan for what is being called the most important operation of the nine-year war. A tough battle in Kandahar — against Taliban militants as well as corruption, incompetence and lack of governance — lies ahead.

Thousands of American troops are heading into southern Afghanistan for what is being called the most important operation of the nine-year war: bringing stability to Kandahar, the country's second-largest city and the birthplace of the Taliban movement.

The operation, dubbed "Cooperation for Kandahar" and expected to last into the fall, is slowly beginning to take shape.

Earlier this week, U.S. Army Brig. Gen. Ben Hodges toured downtown Kandahar in his armored vehicle. The city is a honeycomb of low, concrete buildings that stretch to the hazy horizon. Kandahar is sprawling -- like Los Angeles, but without the skyscrapers.

American soldiers looked about warily. That's because there is plenty to worry about: Taliban assassinations and intimidation, as well as common crime. It's a lawless atmosphere of power brokers and their gunmen vying for dominance. 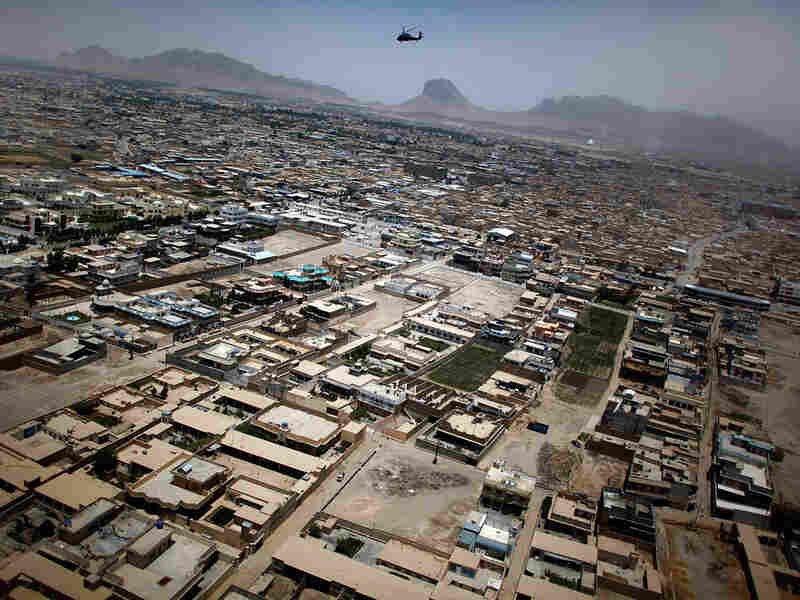 Thousands of U.S. troops are heading to Kandahar in southern Afghanistan to team up with allied and Afghan forces for "Cooperation for Kandahar," an operation to root out the Taliban in its stronghold, the country's second-largest city. David Gilkey/NPR hide caption 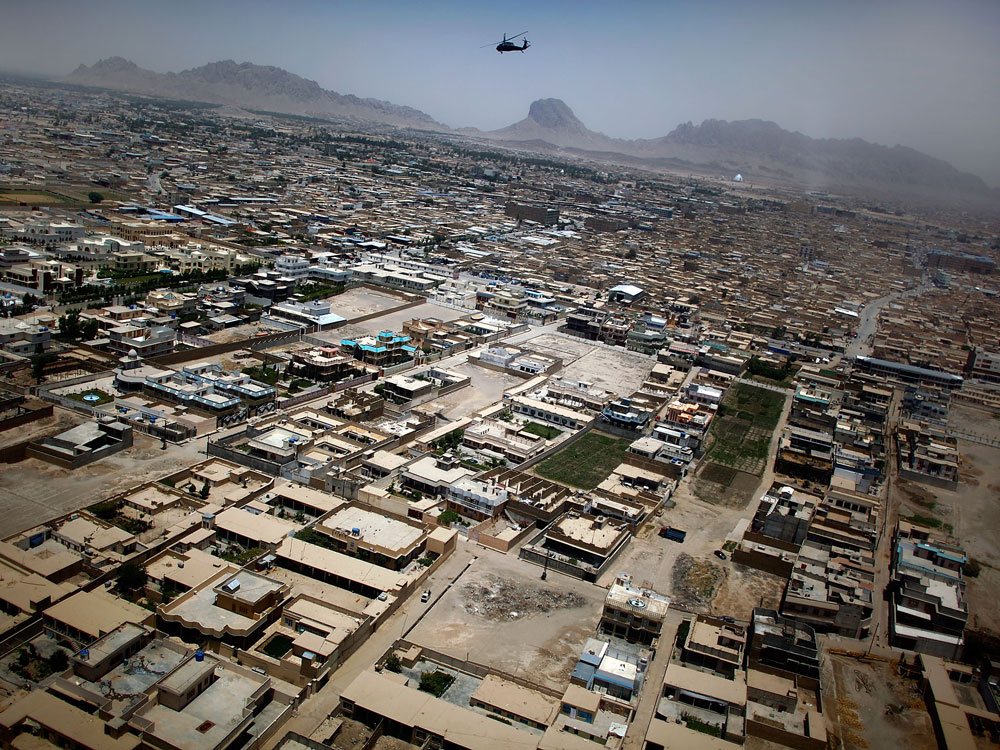 Thousands of U.S. troops are heading to Kandahar in southern Afghanistan to team up with allied and Afghan forces for "Cooperation for Kandahar," an operation to root out the Taliban in its stronghold, the country's second-largest city.

Kandahar is like Dodge City, but without as much open shooting, Hodges said, laughing.

Hodges is the deputy American commander in Kandahar. He has a mischievous grin and a drawl from his native Tallahassee, Fla.

"I think it probably is what Denver must have been like in the mid-1800s, in terms of people trying to grab what they could," Hodges said.

It's that frontier atmosphere that the Americans and their allies are trying to tame.

The fight will take place in three locations: in Kandahar city, where hundreds more U.S. troops and Afghan police will patrol and set up new police stations; on the outskirts of the city, where a dozen security checkpoints are being built in an effort to catch Taliban fighters and bomb makers; and in the rural areas around Kandahar, where thousands of American and Afghan soldiers will sweep through the suspected nests of Taliban fighters.

This week, Hodges surveyed the entire battlefield, and each stop on his tour highlighted the challenge ahead for the Americans.

In Kandahar city, Hodges is looking for a place to house Afghan government workers. Without them, there is no functioning government. "If you want to get skilled employees, you have to give them a decent place to live that's relatively secure," he said.

Hodges met with NATO troops who will rebuild a compound of abandoned concrete houses to serve as new housing. The dwellings are littered with broken glass and dangling electrical cords.

Hodges joked with an Afghan police commander about how much space the man would need for his family.

"You've got like 20 children. I think you would need two compounds," he said.

For all the laughter, the police -- plagued by petty corruption, incompetence and little leadership -- are part of the problem in Kandahar. As a result, the Americans are building new barracks to house the Afghan National Police, who are coming in to help with the Kandahar operation.

The national police are seen as somewhat more professional than the locals -- though their presence is only a temporary solution.

Zazai said corruption used to be a problem. "But since I started, we reduced the level of corruption, and we are still working on that process," he said.

On his tour, Hodges' convoy moved through the city like a long line of elephants. There is a sense of normalcy in Kandahar, despite the city's reputation. Shops are open. Traffic is heavy. Families walking along the sidewalks watched the military convoy.

Hodges stopped at an abandoned hotel, surrounded by vacant lots. He had planned to rent the building -- for an expected $4,000 a month -- to house new police recruits. 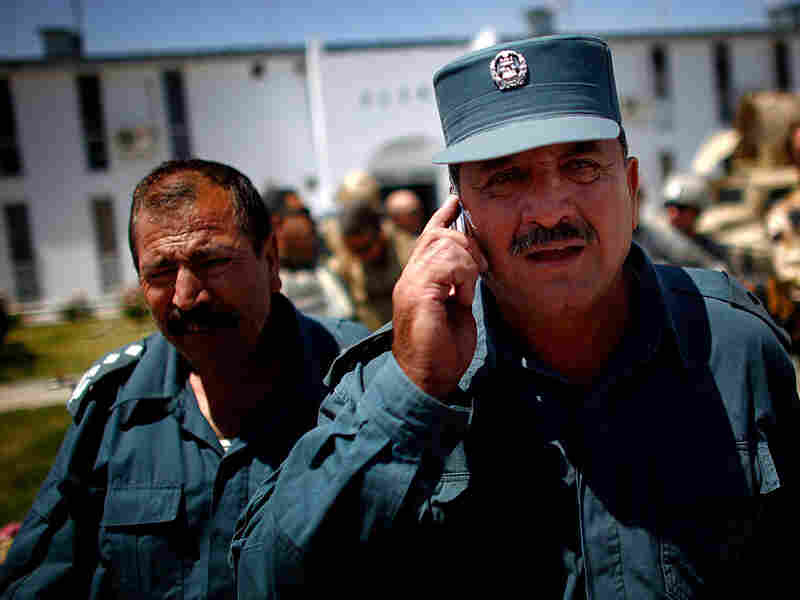 The national police, regarded as more professional than local police, are assisting with the Kandahar operation. Corruption of public officials is one of the biggest problems in Afghanistan. Kandahar's police chief, Sardar Mohammad Zazai, talks on his cell phone outside national police headquarters. David Gilkey/NPR hide caption 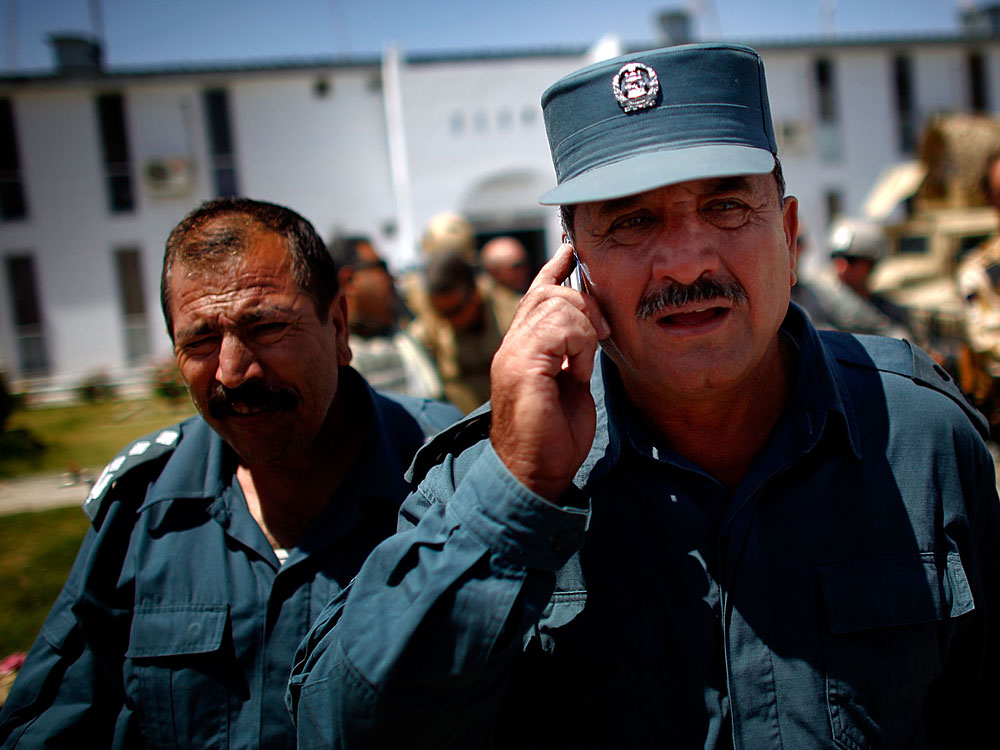 The national police, regarded as more professional than local police, are assisting with the Kandahar operation. Corruption of public officials is one of the biggest problems in Afghanistan. Kandahar's police chief, Sardar Mohammad Zazai, talks on his cell phone outside national police headquarters.

But that is not going to happen.

The owner walked over and told Hodges that he had already rented the place for $10,000 -- to another American government agency.

The name of the building's owner? Karzai -- a cousin of Hamid Karzai, the Afghan president.

The Karzai family has a tight grip on Kandahar. The president's brother, Ahmed Wali Karzai, is head of the provincial council and the biggest power broker in town. He is also accused of stealing public and private land, and providing support to drug traffickers.

Most officials in Kandahar steer away from talking about him.

"That's a very sensitive ground there," said Canadian Brig. Gen. Jonathan Vance, who commands U.S. and allied forces around Kandahar. "He has great capacity to do things that we need. But if you're in a country that has been in peril for so long, any powerful person, your capacity to survive is pretty good and the methods of that survival sometimes don't pass the sniff test," he says.

The corruption is made worse by the hundreds of millions of dollars the U.S. is spending in Kandahar, on everything from rental housing and trucking to construction and security. The U.S. is struggling to find a way to spread that wealth -- so a few power brokers don't grab it all. But there is no good solution yet.

On The Ground In Zhari

His tour continuing, Hodges climbed into a helicopter and flew north over the city, toward a narrow strip of green. Orchards and fields hug the river below. In the distance -- desert terrain and the district of Zhari in Kandahar province, a hiding place for Taliban fighters.

The helicopter landed at Forward Operating Base Wilson, a jumble of tents and newly constructed plywood buildings.

Inside the military operations center, Hodges and a few other officers unfolded a map, showing where thousands of American and Afghan soldiers will operate in Zhari.

One of the officers, British Maj. Gen. Nick Carter, commander of all U.S. and allied forces in southern Afghanistan, explained that to win in Kandahar, the allies must root out the Taliban from Zhari. "I think it's still the case that the insurgency has a significant amount of freedom of movement in Zhari, and that's inevitable given that we haven't really had much of a presence here for last few years," Carter said.

As many as 8,000 U.S. and Afghan troops will replace the 800 American soldiers in Zhari. They'll start patrolling next month, pause in August for the holy month of Ramadan, and then go after the Taliban in September.

How To Measure Success

Carter said the big test is not how many Taliban they kill. It's whether the local meetings, called shuras, are well represented.

"That will give you a sense of whether you're being successful or not because when it's not representative, it probably means the security situation is not ideal, and they're intimidated, and they don't have freedom of movement," he said.

But Carter said Afghans want more than just a meeting. "They want to be able to educate their children; they want access to basic health care. They don't really want a lot of central government. But they do want access to the capacity of government to solve their problems," he said.

That is one of the most important unanswered questions about the U.S. and NATO operation: Will the government of President Hamid Karzai do its part?