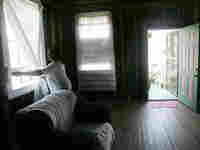 One of the group's leaders, House Majority Whip James Clyburn (D-SC), explains the trip's significance and their findings.