Accessibility links
Sacred Sheep Revive Navajo Tradition, For Now For as long as anyone can remember, Churro sheep have been central to Navajo life and spirituality. Yet the animal was nearly exterminated by the federal government, which deemed it an inferior breed. Now the Churro is making a comeback, but the old Navajo ways may not. 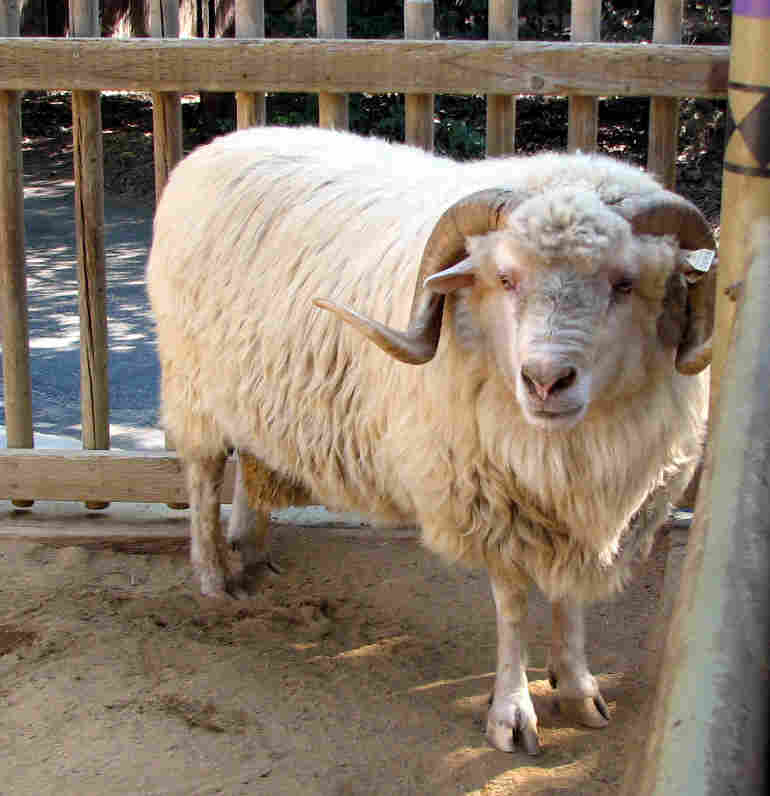 Churro sheep are smaller than most breeds and have a long, wavy lustrous fleece that is valued by Navajo weavers. Wikimedia Commons hide caption 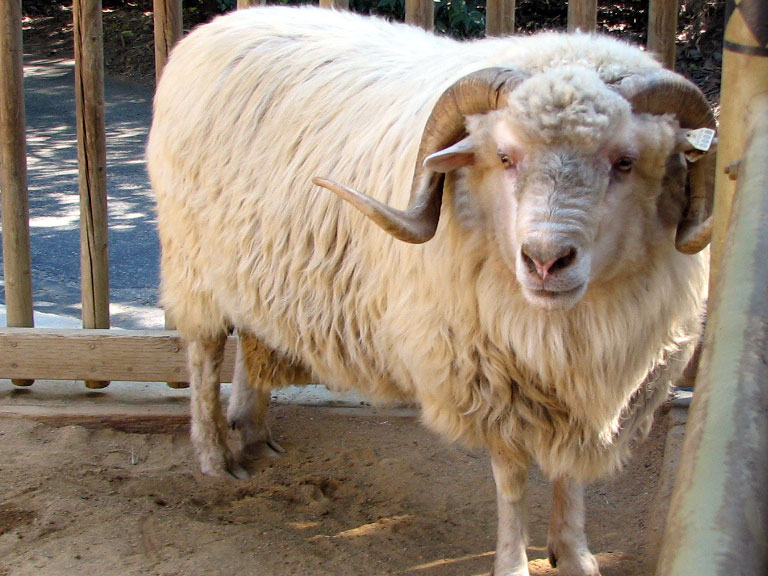 Churro sheep are smaller than most breeds and have a long, wavy lustrous fleece that is valued by Navajo weavers.

For as long as anyone can remember, Churro sheep have been central to Navajo life and spirituality, yet the animal was nearly exterminated in modern times by outside forces who deemed it an inferior breed. Now, on a Navajo reservation of northern Arizona and New Mexico, the Churro is being shepherded back to health.

The Navajo Nation is the size of West Virginia, and at last count, 175,000 people live here. Most people are spread out in small clusters that you see off in the distance from the highway. Amongst modern prefab houses and hogans, the multisided traditional homes of the Navajo, are often corrals with small bands of sheep grazing nearby.

"Sometimes you find me, and I just want to sit in the corral with them," Navajo weaver Roy Kady says. "Just find a corner and I sit there. They motivate me, even just to see them; it's that strong to me."

Churro sheep are smaller than most breeds and have a long, wavy lustrous fleece that is valued by Navajo weavers like Kady. He lives near Teec Nos Pos, where he's chapter president -- sort of like being the town's mayor. For him, this flock is part of something larger, something he calls "din'e bi iina," the Navajo lifeway. "Din'e" is the preferred name for the Navajo, and "bi iina" means "lifeway."

"Sheep is your backbone," Kady says. "It's your survival. It's your lifeline."

For centuries, the Churro was all these things, providing the Navajo with what they needed to survive in the stark desert: meat for sustenance, wool for weaving clothing and blankets, sinew for thread. It's no wonder the Navajo are grateful, even reverential when it comes to the Churro.

"Sheep is a very important part of this whole cosmology to us," Kady explains. "You know, there are songs to where it refers to 'the first thing I see is the white sheep to the East when I wake up to make my offering. It stands at my doorway.' And that's how we know that the sheep is something that's very sacred to us."

Where The Churro Went

The Churro were the first domesticated sheep in the New World, and, by most historical accounts, were brought to the Southwest by Spanish Conquistadors in the 1500s. Over the next three centuries, Churro sheep and the Navajo wove a life together in a balance of nature. However, by the 1860s, America's westward expansion collided with Navajo resistance. In a tragic move, Kit Carson and his troops were ordered to relocate the tribe and destroy their livestock.

"The eradication of this particular sheep breed -- because we are connected to it with songs and prayers and ceremonies -- when it was taken from us, that part of our life was also destroyed," Kady says.

Eventually the Navajo were allowed to return to their ancestral lands, where they built their herds back. That is, until government agents returned in the 1930s -- with orders to eliminate the Churro.

"The U.S. government thought that they had too many sheep -- and the wrong sheep," says Lyle McNeal, a professor of animal science at Utah State University. He says the reason the government gave was environmental.

The Churro "were causing premature siltation on a new dam being built on the Colorado called Hoover," McNeal says. "They felt that the runoff and the overgrazing would make that dam worthless in a few years." In 1934, the federal government started a stock reduction.

Killing off the Churro sent the Navajo economy into a tailspin. Realizing the tribe could not survive without their herds, the government introduced standard breeds, whose meat and wool were more uniform to market demand.

For decades, most people thought the Churro had been decimated. But in 1972, when McNeal was teaching in California, he took his students on a field trip to the Salinas Valley where he noticed some strange-looking woolly creatures as they stopped to visit a rancher.

"At that stop is where I really first saw a living Churro. I'd read about them before then, but I had never seen one up close," he says. The discovery spurred what can best be described as a personal and professional calling -- a 30-year mission to bring the Churro back from the brink of extinction.

McNeal and his supporters scoured hidden canyons on the reservation for surviving Churro, and eventually found enough animals to begin a breeding program. This led to the establishment of the Navajo Sheep Project, which is dedicated to bringing back the Churro.

"When I had sheep in the truck and we were making deliveries down there and I'd stop to get some gas, some of the elders would be attracted to the truck," McNeal says. "They would say, 'These are the real sheep. Where did you get them?'"

"That's when I started getting the signal that these are more than just a sheep, so it added a dimension to the Navajo Sheep Project effort that I hadn't expected."

A Blessing Of Sheep

The road between Gallop and Shiprock, N.M., leads toward a sheer sandstone cliff. In a corral with a few dozen Churro, weaver Tahnibah Natani gathers her ewes and rams as her husband prepares for a ceremony to bless and protect the sheep.

Anderson Hoske is a medicine man. He's lit up a mix of local plants, making sure all the sheep breathe in the thick aromatic smoke from the smoldering fire.

"The smoke is like a flu shot to them," he says. "It's all about chasing away the sickness spirits, different sicknesses."

Hoske begins to chant. He sings an ancient prayer, then Natani fills a sacred pipe and blows smoke into the face of each sheep.

This is a family that shows its gratitude for the gift of life that is given each time it takes an animal for food. This is a family that will shear these sheep, clean the wool, spin it into yarn -- which then goes to the loom to be woven, not just as a work of art, but a visual representation of heaven on earth.

"So when you are weaving, actually you're doing a prayer because the warp is considered a representation of rain," Natani says. "The tension cord is lightening. The top of the beam of the loom, the very top, represents the sky, Father Sky. And the bottom bar represents Mother Earth. Everything on the loom has a special song for it."

"So it becomes a prayer."

Natani and Hoske are committed to keeping the traditions of their ancestors alive in a modern world. They're active in a region-wide community of herders, weavers and restaurateurs who are dedicated to the Churro. Even though the breed is a small minority of the sheep on the reservation -- there are just over 4,000 of them -- it's no longer considered endangered.

But while the Churro are thriving, it may be that this weaver and medicine man are becoming the rare breed, even within their tribe. Like most Americans, Navajo have become tied to a paycheck economy and a new generation is growing up mesmerized by what's beamed in on the satellite dish.

On a background of pink sand, golden brush and a pewter gray sky, Kady and his mother enter their remote hogan to escape the cold. They occasionally trade words in Navajo, but otherwise she sits expressionless in her long skirt and bright scarf as her son reveals a deep worry for the survival of his tribe's traditions.

"I think we are at the point where, yeah, it could die out -- tomorrow," he says. "But coming from my heart is that ‘Wait a minute, hold on -- you know, this is good and has to be continued.' You oftentimes hear the phrase, 'Oh, the youth are tomorrow, they are our future,' that sort of thing. But I always say, 'No. They're now. It has to happen now.' We as teachers need to stop and say, 'Let's get with it and teach them before it's forgotten.'"

This started out as a story about saving an endangered breed of sheep from extinction, but in the end, it's about more than that. It's about an endangered culture struggling for survival in a shrink-wrapped world.