Accessibility links
At Arkansas Campground, A Search Amid Devastation At the Albert Pike campground, pickup trucks and 25-foot campers are strewn about and massive trees are rolled flat like stalks of wheat. Rescuers are still looking for people who remain missing after a flash flood claimed 18 lives. 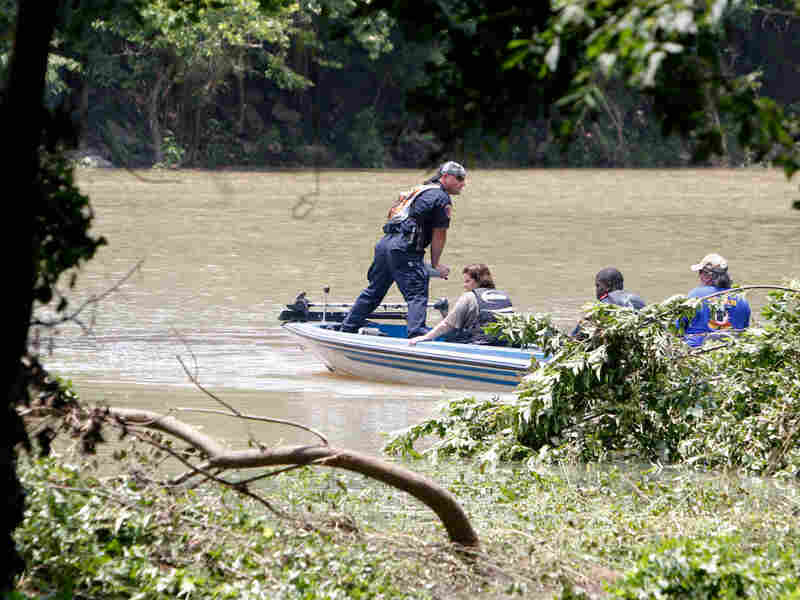 Officials search near the edge of the Little Missouri River near Langley, Ark., on Saturday after a flash flood swept through a popular campground, killing 18 and leaving dozens missing. Sue Ogrocki/AP hide caption 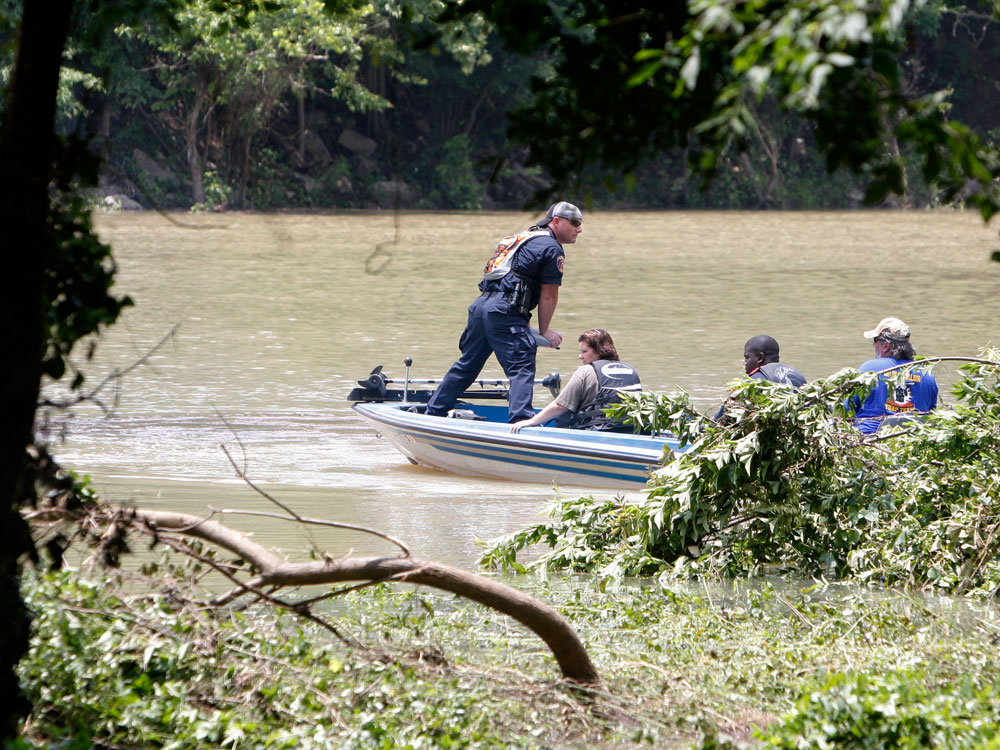 Officials search near the edge of the Little Missouri River near Langley, Ark., on Saturday after a flash flood swept through a popular campground, killing 18 and leaving dozens missing.

It's still beautiful at the Albert Pike campground in Arkansas' Ouachita National Forest. The sun streams through the tall trees and the soft mountains rise from the Little Missouri River. But bring your gaze down from the sky and it's a different story.

Pickup trucks and 25-foot campers are strewn about the campground as if Mother Nature had turned into a spoiled child and thrown a tantrum. Next to the river, massive trees are rolled flat like stalks of wheat.

It is impossible to stand amid the devastation and not imagine the horror just after midnight Thursday, when a flash flood along the Caddo and Little Missouri rivers claimed 18 lives. Rescuers are still looking for two dozen people who remain missing.

Perhaps the most shocking detail of the devastation is something that doesn't seem shocking at all when you first see it. It's a large, dirty white square in a tree. When you finally figure out what you're looking at, it's still hard to get your mind around. It's a concrete pad -- intact, 3 inches thick, about the size of small hotel room. Each campsite had one with a picnic table bolted into it.

"The concrete pads ... have been lifted out of place and turned over and jockeyed around -- an indication of just how powerful the water system was that came through here," says John Nichols, a geologist with the national Forest Service.

If the smashed campers and pickups testify to the power of the water, the small mountain that abuts the campground provides evidence of the speed of the catastrophe. Although the hill is steep and full of brush, it's just 75 yards away from the campsites.

Make it up that hill 10 feet and you don't drown. But the water rose fast and it moved fast. Nichols says if you slipped, you most likely didn't make it back to your feet.

"If you look over ... on the side of the hill, you can see where the water flattened down the grass. That's about 7 or 8 feet above where we are here," he says. "When water starts rising that fast, you know, it was pouring off the banks, it was pouring off everywhere, just swelling this area up."

And, of course, there were people who were incapable of an athletic sprint through a torrent of water in the dark of night -- young children and grandparents. Some families climbed on top of their campers and floated down the river in their unlikely boats and were amazingly rescued.

One rescuer told of a teenage girl who survived by wrapping her arms and legs around a massive tree, the water squashing her like a bug on the windshield. By the time it was over, the skin was flayed from the girl's front from her neck to her ankles by the friction of the tree bark. She could barely walk, but she had held on and lived.

At least 18 other campers drowned. And the search for the missing continues.

On the water, searchers are using kayaks and canoes. On the banks, it's on horseback, on foot, using trained dogs when possible.

Nobody has lost hope that a rescue could still be possible, but for the families of those still missing, shock has already turned to grief.

There have been questions about whether the campers in the Albert Pike campground should have had more warning. Those who entered through the main entrance were told a weather system was moving through. But neither the Forest Service nor the National Weather Service had a clue what was about to happen.

"This thing came very, very suddenly. And as you all probably know, not everybody necessarily entered the forest through the main entrance of the forest. There are many ways to get in to the area," said U.S. Agriculture Secretary Tom Vilsack, who traveled to Arkansas to inspect the campground. "We did everything we could do under the circumstances. But we will absolutely review this, as we should."