Accessibility links
Sandy Denny: Mercurial Queen Of British Folk Rock Sandy Denny became the queen of British folk rock when she joined the band Fairport Convention in 1968. Her fans included Robert Plant and Nina Simone. Denny was a skilled songwriter with a powerful and expressive voice, yet today many people don't recognize her name. 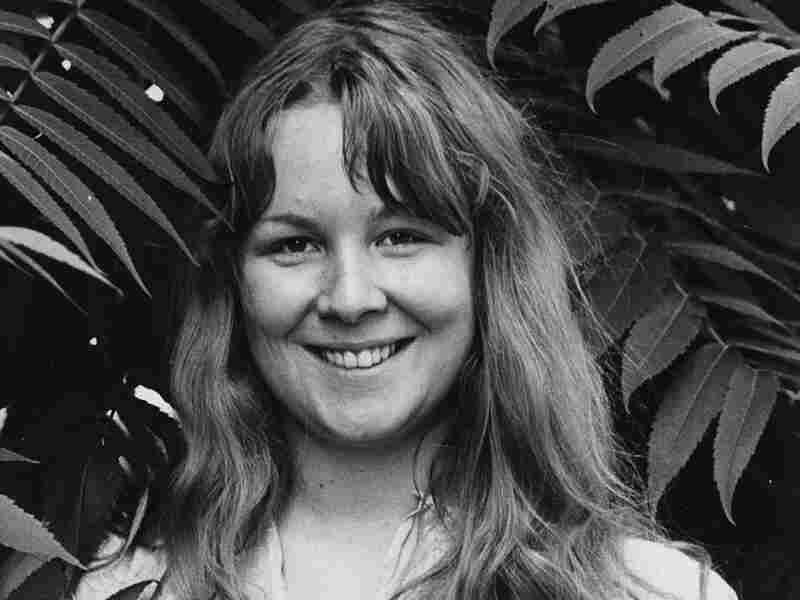 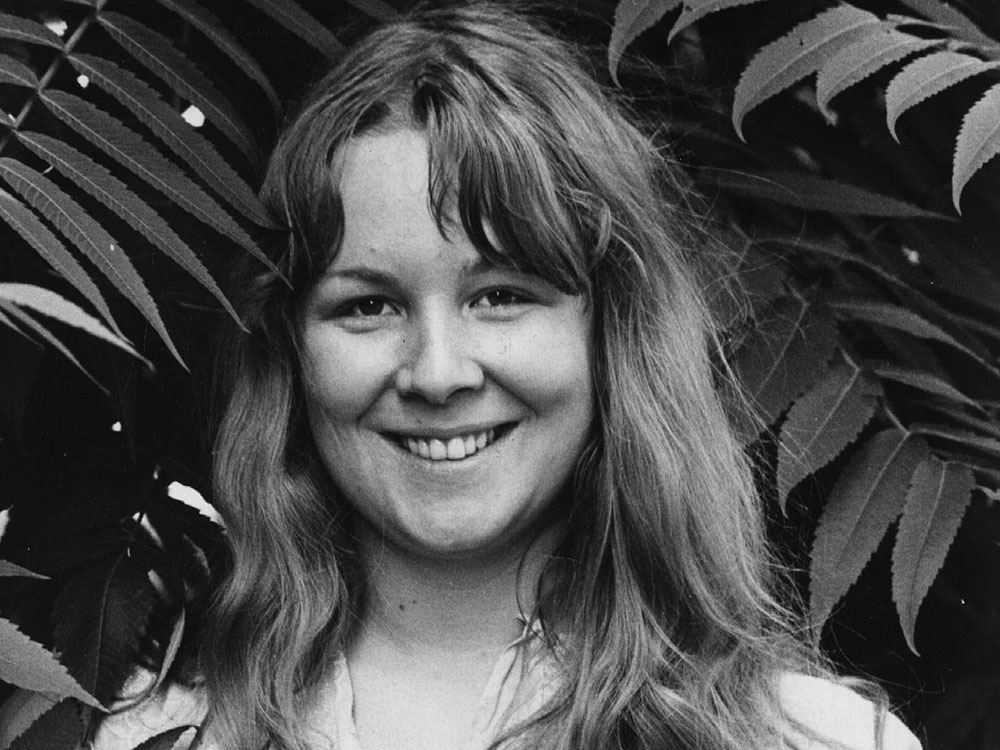 Robert Plant called Sandy Denny his "favorite singer out of all the British girls that ever were." Denny became the queen of British folk rock when she joined the band Fairport Convention in 1968. Nina Simone was also a fan. Both Simone and Judy Collins -- among many others -- recorded Denny's song Who Knows Where the Time Goes.

Yet today, many people have no idea who Sandy Denny was.

So here's a primer. For starters, she could play piano and guitar -- well -- learning the former from her father's Jelly Roll Morton records, and the latter from the likes of John Renbourn and Jackson Frank.

She could also write songs: "Who Knows Where the Time Goes" was one of her first efforts -- written when she was around 19. And boy -- could she sing.

"Her voice would go from a whisper to full throttle in the space of a line or two. That was a great gift that she had," says Richard Thompson, her collaborator in Fairport Convention and no slouch when it comes to songwriting and playing the guitar.

Someone To Be Reckoned With

The woman behind the voice was complex and contradictory: a remarkably gifted musician from an early age who was painfully insecure and paralyzed by career decisions. At the same time, she could walk into a room and dominate it. Her confidence is clearly heard in a 1972 BBC interview, as she remembered her first foray into public performance while at art college.

"Just down the road there was a little barge on the river called The Barge Folk Club," Denny recalled. "And I used to go down there. And I thought, well I can sing as well as these, you know, when I heard these people singing."

Alexandra Elene MacLean Denny grew up in the tennis town of Wimbledon. Her grandmother was a Scottish ballad singer, and Sandy's very proper English parents had their daughter playing piano as a child. She learned to play her older brother's guitar, and before long, she ditched art school for folk clubs. After making her BBC debut at 19, Denny spent the next two years as a successful solo folk singer.

Then Fairport Convention announced it was auditioning for a new lead vocalist. The band had already released its first album and built a reputation for vaguely American-sounding psychedelic folk rock.

"I think we'd listened to a couple of really average singers before Sandy came in," Thompson recalls. "This was in like a Boy Scout hall somewhere in South London. And she just stood out immediately as being an absolutely extraordinary performer. And we were very happy to have her in the band. But she said, 'I'd like to audition you now.' "

The Voice Of British Folk Rock

The sheer force that was Sandy Denny turned Fairport Convention around. She introduced the band to the traditional ballads she'd learned as a child. They dropped their American aspirations and dove wholeheartedly into their Englishness. Their first album together included the traditional songs "Nottamun Town" and "She Moves Through the Fair." To open the record (called What We Did On Our Holidays, 1968), though, they chose a Denny original, "Fotheringay" -- a song about Mary, Queen of Scots. Thompson says Denny became the characters in her songs.

"Sandy had a way of really living a song. And I think she was able to do it because she had a very acute imagination. You could almost describe Sandy as someone who didn't have any skin. She was so hypersensitive to every little thing in the world, it was as if she lived more vividly than the rest of us. And I think that ability to get right inside a song, inside the persona of a song, was really quite extraordinary," Thompson says.

Denny's friend -- and Richard's ex -- singer Linda Thompson says Denny could use the light and shade in her voice like an actress.

"Sandy could sing, you know, a 43-verse traditional ballad and you would never, ever, ever once be bored," says Thompson, pounding on the table for emphasis. "And that's very hard to do. Remember, there's no hook. There's no bridge. There's no chorus. There's nothing! Absolutely nothing upon which to hang your hat vocally speaking. So you have to make it very, very interesting. You have to speak it almost but obviously not speak it because you've got to retain the melody. She was particularly good at doing that. You know she just had this incredible soul for making you believe in what -- it's the same as actors, you know. There's only one criteria with actors and singers: Do you believe what they're saying? With Sandy, you just believed every word, every syllable, every heartbeat. It was all relevant. That's a great gift."

By their third album together, Denny and Fairport Convention were poised to take off. Liege and Lief featured a mix of traditional tunes and original songs that combined to produce a unified sound and a record many thought was their best. They'd been together just 18 months. An international tour was planned. Their label was eager to bring them to the U.S.

The reasons are many. They begin, perhaps, in May of 1969. Fairport played a show in Birmingham, England. Afterward, Denny returned to London with her new love, an Australian singer and guitarist named Trevor Lucas. The rest of the band traveled back in their tour van. The driver reportedly fell asleep and the van crashed, killing drummer Martin Lamble and Richard Thompson's girlfriend, Jeannie Franklyn (one of the most beautiful songs on Liege and Lief, Farewell, Farewell, is Richard's tribute to them).

The musicians were devastated. When Fairport was asked to tour the songs from Liege and Lief in Europe, Denny refused to fly. She was eventually dragged to the mainland, but that was the beginning of the end for Denny and Fairport. She was also apparently worried about losing her new relationship to months away on tour.

So she decided to form her own band with Lucas -- named Fotheringay after the place where Mary, Queen of Scots was held prisoner. The band got mixed reviews and lasted about a year. Then Denny embarked on a solo career that produced four albums. She rejoined a reconstituted Fairport Convention in late 1973 -- an off and on relationship that lasted most of the rest of her life.

A number of people have described Denny as "mercurial" -- the commanding personality who was sometimes afraid to go onstage. Richard Thompson says she often asked others' opinions -- about how she sounded and which songs to sing -- but sometimes dismissed the answers she got.

"There were a lot of Sandys, you know. She was capable of violent mood swings. She could be charming. She could be horrible," Thompson recalls. "On the whole, she was just great to be with, but there was another side to Sandy which was a little dark. But I think when she sang, you know all that disappeared and her personality was kind of effaced into the performance."

It wasn't just singing hard that strained Denny's voice. Even before joining Fairport, she had the reputation of being able to keep up with the hardest-drinking folkies. Linda Thompson says Denny smoked cigarettes like a chimney. Toward the end, she needed more to numb the insecurities that seemed to bedevil her.

"Substances were taking over. Cocaine was taking over. And it all just fell apart a little in a time-honored musical fashion," Linda Thompson says, with a sigh.

Nevertheless, by 1978, Denny had won the Melody Maker Poll as Best Female vocalist -- twice. She'd reached a new audience with her duet with Robert Plant on "The Battle of Evermore" from Led Zeppelin IV.

"She would have liked to be more commercially viable or made more money. But she just was what she was: a supreme artist and she just wasn't," Thompson pauses, "she just wasn't a pop star."

Despite the setbacks and dubious career choices, in interviews Denny always seemed to look to the future -- to what might be.

"I want to be happy," she told the BBC in 1972. "I want to be happy in my work and one day I might reach something a little bit closer to the way I want it to go. But it's all happening in a very slow way and if we've got time left in this world, you know, perhaps I'll get there one day."

Sandy Denny had been performing professionally just a little more than a decade when she died on April 21, 1978, of a brain hemorrhage. -- apparently caused by several falls.

Tom Cole reported the radio piece above. Here, he offers a few of what he considers to be Sandy Denny's best songs.

Sandy Denny's was the voice I heard in my head through most of high school. Something about the music suited me then and still appeals to me. It's music for a grey late afternoon in autumn. When I hear the songs from Liege and Lief today, they call up -- not really memories -- but emotions. A kind of a sense of loss.

While reporting this piece, I asked Richard Thompson if he thought Denny's music was "melancholy."

"I think her music is melancholy to a large extent but I think a lot of British music is especially if you come out of the folk tradition," Thompson said. "You know, if you grow up on a diet of murder ballads and people being carried off by the fairies and all that kind of stuff, you know there's a certain sadness in the music that's actually very appealing. It doesn't necessarily mean you're a sad person; it doesn't mean that you wallow in darkness. It just means that you sing about sad things. And then life goes on."

Doing this story was really hard because none of my favorite songs are in the radio piece. The songs that are there are the ones that need to be there to tell the story -- there was no question in my mind they were the ones to use. They just aren't the ones that call up the strongest feelings for me.

But here are five or so from several different albums -- not intended to be comprehensive: I'm sure I've left out your favorites -- just a few of mine:

"I’ll Keep It With Mine" from What We Did On Our Holidays -- Sandy Denny just sings her heart out on this Dylan song. As Richard Thompson put it: "from a whisper to full throttle in the space of a line or two."

"Matty Groves" or "Tam Lin" (I'm already cheating because I can't keep it to five) from Liege and Lief -- These are the classic story songs that keep you hanging on the edge of your seat -- listening hard to find out what's going to happen next. As Linda Thompson said, Denny maintains that tension with her phrasing. At least "Tam Lin" has sort of a happy ending.

"Crazy Man Michael" from Liege and Lief (just listen to the whole album) is a beautifully sad Richard Thompson song (co-credited to Dave Swarbrick). Sandy embodies Thompson's lyrics -- and the character of the title -- in her voice.