Accessibility links
'Click': That Magical Instant Connection Explained Let's say you meet someone at a party or say hello to a new co-worker, and things just click. Sometimes, one brief conversation evolves into something more. In his book, Click, Ori Brafman explains the factors that determine whether a chance encounter has the makings of a lasting relationship. 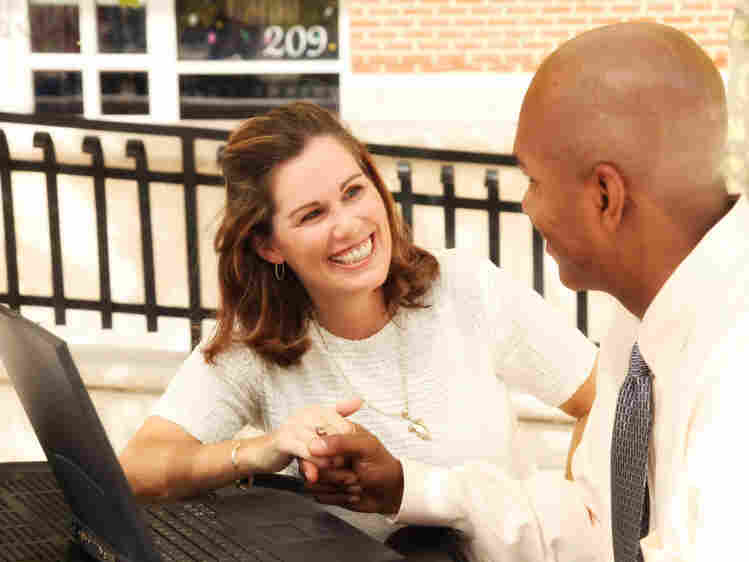 "Clicking" isn't limited to romantic love -- it can also be a deep connection between future friends. iStockphoto.com hide caption 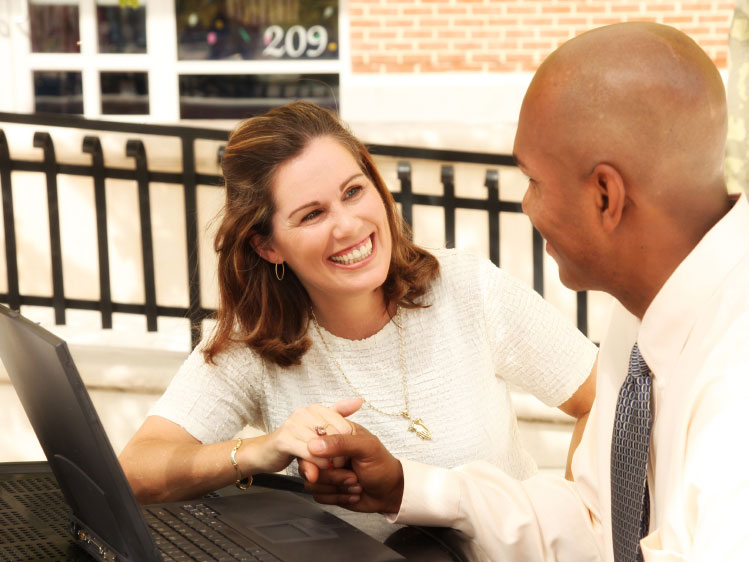 "Clicking" isn't limited to romantic love -- it can also be a deep connection between future friends.

You meet someone at a party or say hello to a new co-worker, and things just click. Sometimes, one brief conversation evolves into something more.

In Click: The Magic of Instant Connections, author Ori Brafman explains the factors that determine whether a chance encounter has the makings of a lasting relationship.

Brafman and his co-author and brother, Rom Brafman, open the book with stories of unlikely connections. In one instance, the brothers explain how hostage negotiator Greg Sancier relies on that "click" to get his job done. Rather than approaching the hostage taker with force and intimidation, Sancier exposes his own vulnerabilities.

"He'll sit there, and he'll talk to the hostage taker for five, 10 hours," Brafman tells NPR's Neal Conan. When the hostage taker finally reveals something personal -- say, that he lost his mother -- Sancier uses that revelation as an opportunity. He empathizes, shares a similar story and builds trust out of tension. 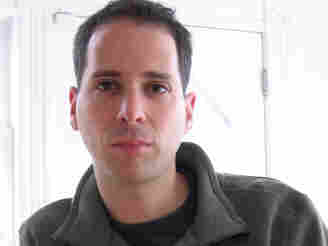 That's when the hostage taker and the hostage negotiator click and begin to have a meaningful conversation.

According to Brafman, that vulnerability -- exposing a weakness of your own that another person reciprocates -- is a key click-causing factor.

Brafman explains how just about anyone can create a click out of shared vulnerability. The trick is forgoing conversations about the weather in favor of more probing questions.

He recommends asking questions like: "What's something meaningful that's happened to you in the last week?" Or: "Who are you feeling closest to in your family right now?" The key is authenticity and appropriateness, or the connection won't be formed.

Only then, he says, can you begin to experience the "magic" of incredible connectedness. 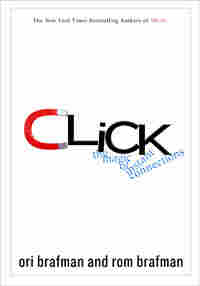 Sitting by the pool at the Pasadena Ritz Carlton, Paul was about to do something impulsive, even by his standards.

The Southern California evening breeze was starting to pick up. Although it had only been two days since they first met, anyone within earshot of Paul and the woman sitting across from him at the poolside table would have thought they'd known each other for years. They talked about everything from world travels to the antiwar movement in the 1970s to Socratic philosophy; their conversation had a natural flow to it.

Watching the two of them -- Nadia, with her fine Mediterranean features and striking jet black hair, Paul, with his rugged all-American looks -- one had a sense of their natural comfort together.

It was as if each was attuned to what the other was thinking. One moment they were laughing at embarrassing childhood stories, and the next they were finishing each other's sentences. If there's such a thing as synergy between two people, it seemed almost palpable here.

One would never suspect that the two were ostensibly meeting for work. At the time, Paul was leading a $15 billion project proposal to clean up a nuclear weapons facility in Colorado. To help put the proposal together, Paul had assembled experts from around the world. The team had taken over an office building in Pasadena; the work was so intense that the office remained open twenty-four hours a day, seven days a week.

It was Paul's role to make sure all the countless moving parts worked together. Paul was used to this level of intensity. A former army officer in the special forces, Paul was trained to make split-second decisions, and he has the kind of personality people naturally respond to -- he is a natural leader. In conversation, he focuses intently on the other person's every word, making it clear he's fully present.

Every morning at exactly 8:15 a.m., Paul assembled the top executives from the team to brief them about the strategy for the day.

The meeting several days ago was different, though. From the beginning, Paul was keenly aware of the new team member, Nadia. "I immediately thought, who is that?" He instantly felt attracted to her. Nadia's initial reaction to him appeared to be very different, however. It was her first day on the job. Her vacation in Paris had been abruptly cut short so that she could fly to Pasadena and take over as the project's chief operating officer. If that hadn't soured her mood enough, Paul made a comment during the meeting -- seemingly out of left field -- that soured it further.

"I uttered something about there being nothing new in human relations since the time of Plato, Aristotle, and Socrates," he recalled. "I don't even remember why."

Toward the end of the meeting, as Paul stood before the group, he noticed, out of the corner of his eye, a folded note being passed around, from person to person. As he continued speaking, the note eventually was handed to him. He unfolded it and read the first line: "I completely disagree with you."

The note went on for an entire page. But it was unsigned. He looked up, searching for a nod from the note's author. But all he got were blank stares. Only after the meeting ended and the rest of the people filed out of the room did Nadia walk up to Paul.

Remembers Nadia, "Here we haven't met yet, and I just wrote him a note that said, ‘I don't agree with you; what about the change in master-slave relations and relationships between men and women? There have been so many advances in society since then. How can you make such a comment? I'd like to discuss this with you.'"

But Paul, instead of becoming defensive, was intrigued. "I'd like to continue the conversation with you," he told her.

"Any time," she fired back.

Twelve hours later, they were sitting by the pool.

They had told themselves that they intended to use the time not just to resolve the argument but also to delve into some important issues regarding work. Work, however, never came up during their conversation together. Toward the end of the evening, the intensity of their interaction was difficult to ignore.

"Are we going to end up getting in trouble?" Paul Asked Nadia, realizing that they were letting work get away from them.

"Yes," she said simply. It was clear to her from the beginning that there was something between them. "The moment he made that comment about Plato and Aristotle," she told us, "I knew. What we valued in life was very much the same, as were the things we thought were trivial. Who's outrageous enough to even bring up Plato and Aristotle in the middle of a strategy session? I mean, what does anybody who's in there know about Plato and the Greeks, or care about them? He had that courage to be different."

Having accomplished little of the work they had been planning to do, the pair decided to meet again the following night by the pool. And then it happened. Paul, seemingly without any forethought, looked at Nadia and asked, "What would you say if I told you that I loved you and wanted to marry you?"

Nadia retorted, "Is that a hypothetical or is that an offer?"

Let's hit the pause button here: First, it's important to note that Paul and Nadia weren't teenagers driven by hyperactive hormones. They were seasoned business executives. Like most of us, when they met a new person, they usually spent their first moments searching for something to talk about. Where are you from? What kind of work do you do?

Occasionally, though, an interaction with another person is more intense and intimate from the get-go. Maybe we share the same sense of humor, or we admire the other individual's personality or passion, or we immediately sense that we can just be ourselves around the other person. Things feel right; we hit it off. There is an immediate sense of familiarity, and conversation flows easily, without embarrassing pauses or self-consciousness. In essence, we click. 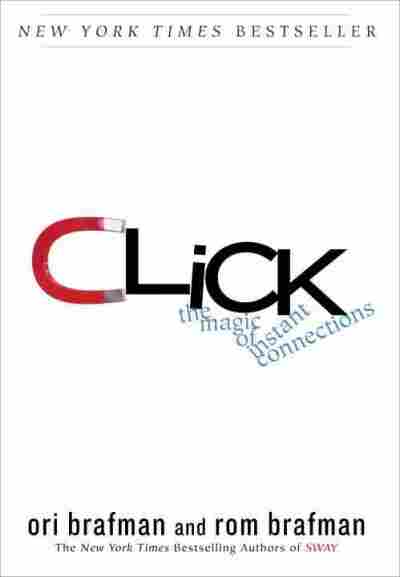 The Magic of Instant Connections

by Ori Brafman and Rom Brafman