Accessibility links
Tapping Afghan Mineral Riches? Good Luck Obama administration officials have outlined new details about the size and scope of valuable metals and minerals present in Afghanistan. The treasure has the potential to change the troubled country's fortunes. But the country's long list of woes -- corruption foremost among them -- will make it difficult. 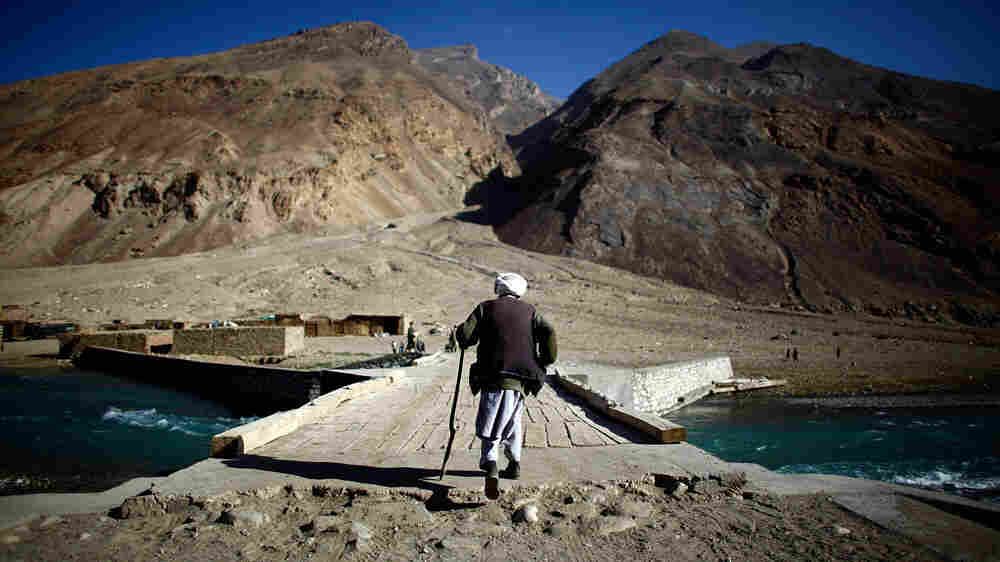 A man walks across a bridge over the Anjaman River in Afghanistan's Badakhshan province in August 2009. David Gilkey/NPR hide caption 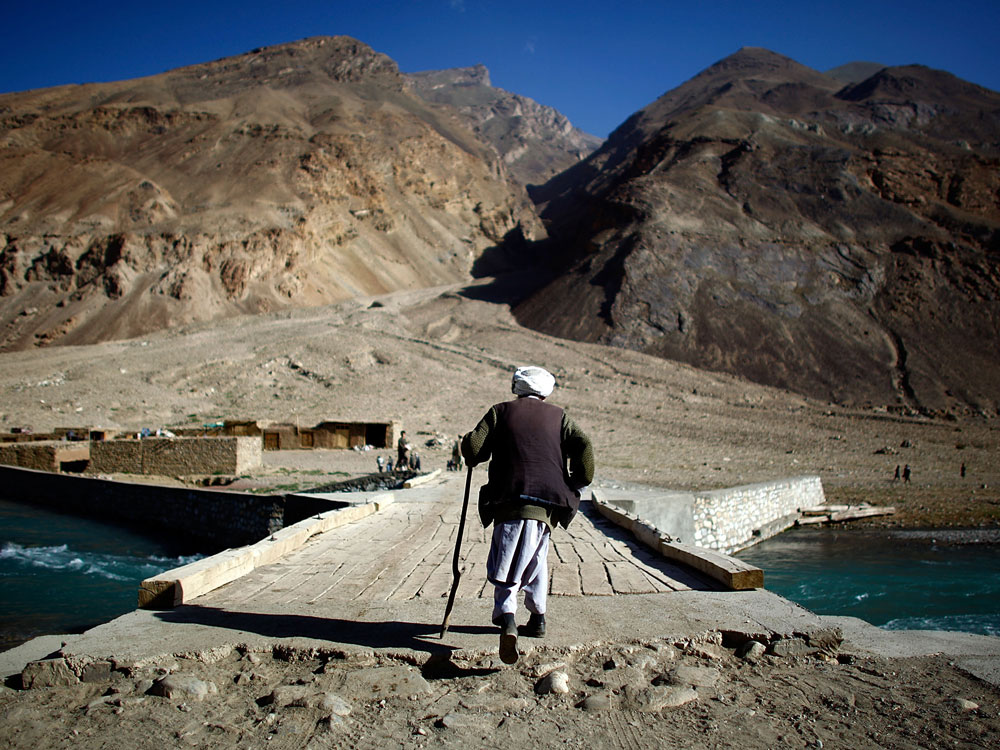 A man walks across a bridge over the Anjaman River in Afghanistan's Badakhshan province in August 2009.

The revelation that Afghanistan is sitting on nearly $1 trillion worth of untapped mineral deposits has the potential to transform that country's future. But under even the rosiest scenarios, it does not appear the new wealth will change dynamics quickly enough in Afghanistan to aid the U.S. military effort there.

U.S. officials have released new details, first reported in The New York Times, regarding major, untouched deposits of metals including gold, copper and iron, as well as the critical information-age mineral lithium. The value of the deposits far exceeds the current size of the Afghan economy.

That has led to newfound hope that the Afghans will be able to come off of life support long provided by international aid.

A lot of multinationals have trouble making serious bids because security, insurance, infrastructure and investors are all uncertain.

Daniel Markey, a senior fellow with the Council on Foreign Relations

"This allows at least the prospect of a self-sustaining Afghanistan, one that can pay for its own army and police and the needs of its own people," says Daniel Markey, a senior fellow with the Council on Foreign Relations.

Not All Minerals Glitter

But Markey says he's nervous that Afghanistan will fall prey to the "resource curse," under which nations that base their economies primarily on natural resources fall prey to conflict and corruption -- forces that are already endemic in Afghanistan.

"Afghanistan can make a lot of money from this, but this is the way to make money that attracts corruption," says S. Frederick Starr, chairman of the Central Asia-Caucasus Institute at Johns Hopkins University.

The country's apparently vast stores of mineral wealth will very likely lead not only to continuing internal struggles over control of territory, but further interference from numerous external nations as well, suggests Rajan Menon, a professor of international relations at Lehigh University.

"That mineral wealth is yet another magnet that draws more outside players in the country," says Menon, who also teaches political science at City College of New York. "It's going to ramp up even more substantially the competition for what I'm beginning to call a post-American Afghanistan."

No Short-Term Benefit For U.S.

It's not news that Afghanistan is home to mineral wealth, but the scope of the potential treasure looks to be much greater than had been expected.

Still, it's going to take some time for full-scale extraction to begin. The lithium won't be coming out of the ground prior to July 2011, President Obama's announced date for starting the withdrawal of U.S. troops.

"It isn't a solution to our problem," says Starr, from the Asia-Caucasus Institute. "We need a faster income stream for the government and one that produces jobs, which this doesn't do for two to three years."

There's already concern that the country's mineral treasure will be used as a propaganda tool by the Taliban, amplifying the group's contention that the United States is not in Afghanistan for security but to exploit the nation.

If there were a smart and centralized and noncorrupt Afghan government, it would be able to play the rivals off each other, seeking the best price and trying not to let one outside country be dominant. But it's even arguable whether we have a government in Afghanistan now.

But once extraction gets seriously under way, it's not likely to be American or perhaps even Western companies that do the digging. China outbid companies from several other nations in 2007 for the right to mine copper near the Afghan village of Aynak, paying $3.4 billion for the privilege (as well as alleged bribes).

"President Bush tried to get American companies to bid on the copper mine. None did," Starr says. "Both Democratic and Republican administrations have done a poor job of engaging American investors in the region."

Ramping Up The Competition

China has been making deals around the globe with countries that produce oil and other resources needed to feed its large and hungry industrial machine. China has an overland connection with Afghanistan -- and plenty of cash.

"A lot of multinationals have trouble making serious bids because security, insurance, infrastructure and investors are all uncertain," Markey says. "The Chinese can go in backed by the government, with plenty of capital, and not worry about immediate returns."

If China has an interest in minerals in Afghanistan, it will take a greater interest in that country's security, suggests Michael E. O'Hanlon, director of research in the foreign policy program at the Brookings Institution. "The more countries aside from the U.S. that see some reason to take Afghanistan seriously, the better," he says.

The potential of $1 trillion in exploitable resources will certainly cause plenty of outside countries to take notice. But that may not be all to the good. An increased China presence, for instance, may worry India, because China has been historically more aligned with its rival Pakistan. Russia, Iran and other neighbors are going to want to hold some sway over a richer Afghanistan, or parts of it, as well.

The Essence Of Afghan Statecraft

O'Hanlon believes that Afghanistan's mineral wealth has the potential to assuage many of the country's long-standing problems. Greater cash flow means, among other things, the chance to pay government workers sufficient salaries that they will not inevitably be lured into corruption.

"It doesn't introduce any problem they don't already have," he says. "The corruption's already so bad, I have a hard time seeing it get worse."

Other experts are less sanguine. Not every resource-rich country slides into corruption, but since Afghanistan's already there, the problem could get worse as the scale of wealth grows. And Rajan Menon argues that Afghanistan lacks the leadership to resist being overwhelmed by interference from other nations.

"If there were a smart and centralized and noncorrupt Afghan government, it would be able to play the rivals off each other, seeking the best price and trying not to let one outside country be dominant," he says. "But it's even arguable whether we have a government in Afghanistan now."

Michael Semple disagrees. Semple, now a fellow at Harvard University, has worked in Afghanistan for the past 20 years, most recently as deputy to the European Union's special representative for Afghanistan.

"If there's one thing that the Afghan rulers have focused on over the past 2 1/2 centuries, it's the managing of relations of the multiple powers in the area," Semple says.

"There may be many things in the world they don't have institutional experience at, but, my word, they have experience playing off the regional powers. That is the history of Afghanistan."