Accessibility links
Tom' DeBaggio's Decade With Alzheimer's Disease In 1999, Tom DeBaggio was diagnosed with early onset Alzheimer's disease. He was 57. Soon after the diagnosis, he began talking with NPR about his illness. He wanted to document his decline, to break through what he called the "shame and silence" of the disease. Now he can't talk, walk or feed himself. 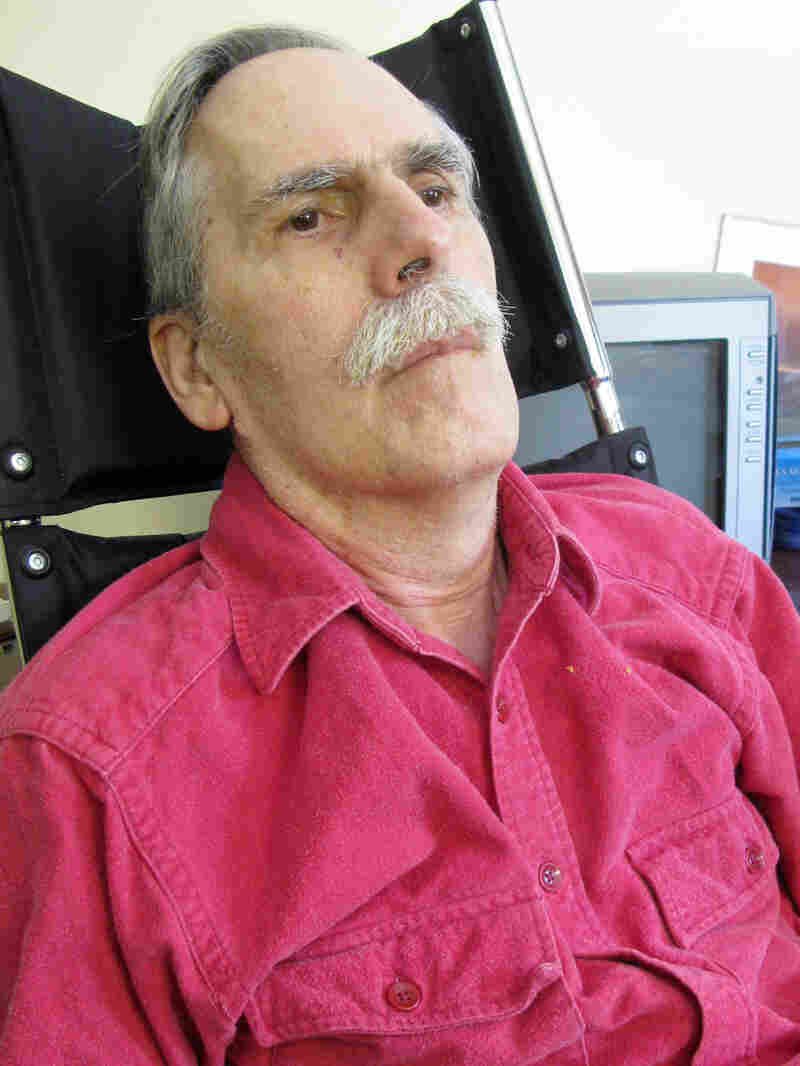 More than 10 years ago, Tom DeBaggio was diagnosed with early onset Alzheimer's disease. He was 57. At the time, he talked with NPR about his illness. He wanted to document his decline, to break through what he called the "shame and silence" of Alzheimer's. Now, he can't walk, talk or feed himself. Melissa Block/NPR hide caption 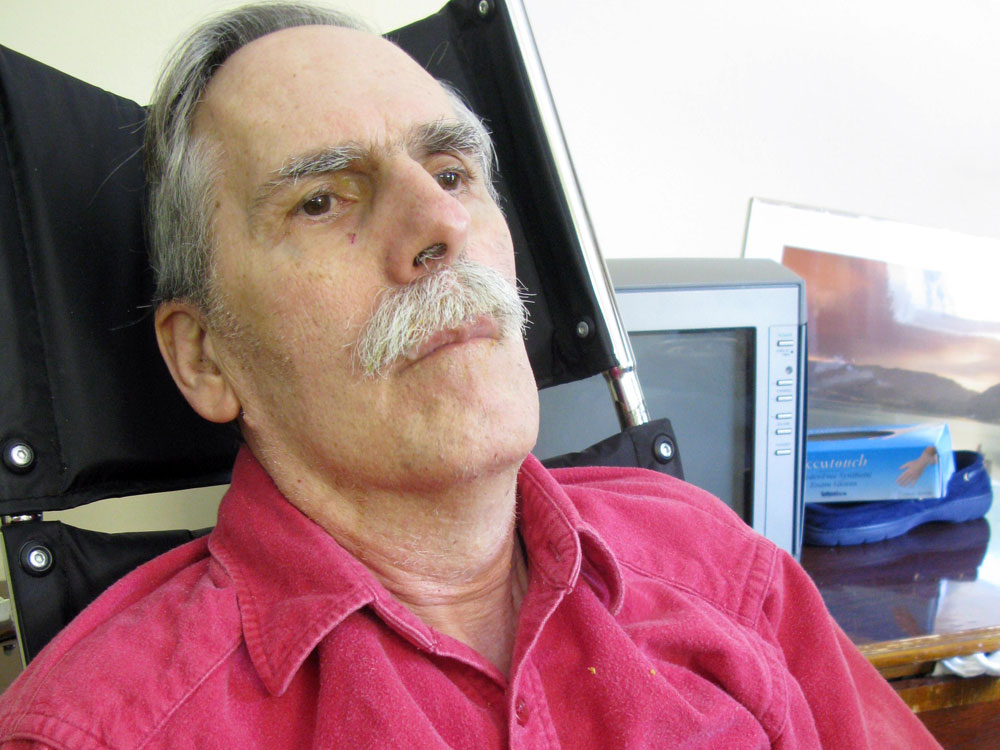 More than 10 years ago, Tom DeBaggio was diagnosed with early onset Alzheimer's disease. He was 57. At the time, he talked with NPR about his illness. He wanted to document his decline, to break through what he called the "shame and silence" of Alzheimer's. Now, he can't walk, talk or feed himself.

In 1999, Tom DeBaggio was diagnosed with early onset Alzheimer's disease. He was 57. Soon after the diagnosis, he began talking with NPR about his illness. He wanted to document his decline, to break through what he called the "shame and silence" of Alzheimer's.

NPR's Noah Adams started the visits with Tom, his wife, Joyce, and his son, Francesco, at DeBaggio's Herb Farm and Nursery in Chantilly, Va.

"I still talk, I still stand up on both feet, I still look the same -- maybe they go out of here and say, 'Doesn't look like anything wrong with him.' And of course you don't see it," he said in 1999.

Over the course of a year, Tom DeBaggio described his growing confusion with language: the sudden, inexplicable tears. And the waves of anger that came with Alzheimer's.

I picked up the conversations in 2005. Tom took me through the nursery, proud to show off dozens of kinds of tomato plants.

When I visited Tom again three years ago, his decline was pronounced. He couldn't name the disease he has, but he could still express his feelings about it.

"I still don't understand why. It just happened in, I guess. I can still do things -- but it's hard to do. And I sure hope that Francesco and all of those people, and everybody like that, that they wouldn't have to go through this," he said.

Since then, I've kept thinking about DeBaggio and his family. Listeners have written in, too, wondering how they're doing.

A few weeks ago, I went to see them again. The visit began with this question to Joyce: "Would he want us to see him?"

"I know that's what he wanted," Joyce says. "Till the very end, he wants to people to know. We just discussed it endlessly. He wanted to throw it in people's faces basically, this is Alzheimer's."

Joyce took me to visit Tom at the nursing home where he's been living for the past two years.

She had resisted putting Tom there. She wanted him to be in his own house as long as possible. But finally, his care became overwhelming.

Tom was dressed and in a wheelchair when we got there. He can no longer walk or use his hands. His language now is gone. He's thinner than when I last saw him, his face hollow. But he had flashes of animation and smiles. And at moments, he seemed to want to express himself.

Throughout our visit, Joyce held Tom's hand, though she says she's not sure whether Tom wants her to touch him.

"Sometimes I think it's comforting and then other times I'm not sure. One time he actually said, 'Don't touch me.' Normally, he doesn't like to be handled, which I think is perfectly reasonable. When they change him, he screams and screams and lashes out. He's not going quietly."

At lunchtime, Joyce fed Tom. Everything was pureed, because swallowing is a problem.

It was a long, painstaking process.

When she left, she told him she'd see him next week. 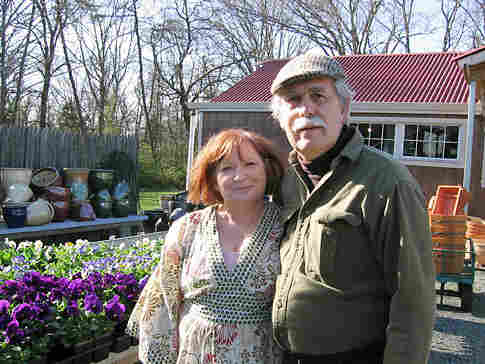 Tom and his wife Joyce at the family's herb farm and nursery in Chantilly, Va., in 2007. Melissa Block/NPR hide caption

'This Could Be Me'

Later that day, Joyce and I discussed the visit. We talked in the nursery, the business Tom started 35 years ago.

I asked her if he still feels like her husband to her.

After he was diagnosed, DeBaggio wrote two eloquent, intimate books about his life before and after Alzheimer's.

In one, he wrote of his fear that he has passed the genes for Alzheimer's on to son Francesco. That thought, he said, was "almost more than anyone could bear."

Francesco is 45 now. He runs the farm, and it's thriving. He says he and his father never talked about that genetic question.

"I know my mom has told me that they had those conversations," he says. "And I've never read the books. It's not something I think I can handle -- it's too raw. The double edge of it being my father and then applying all that to my future -- I just can't do it." 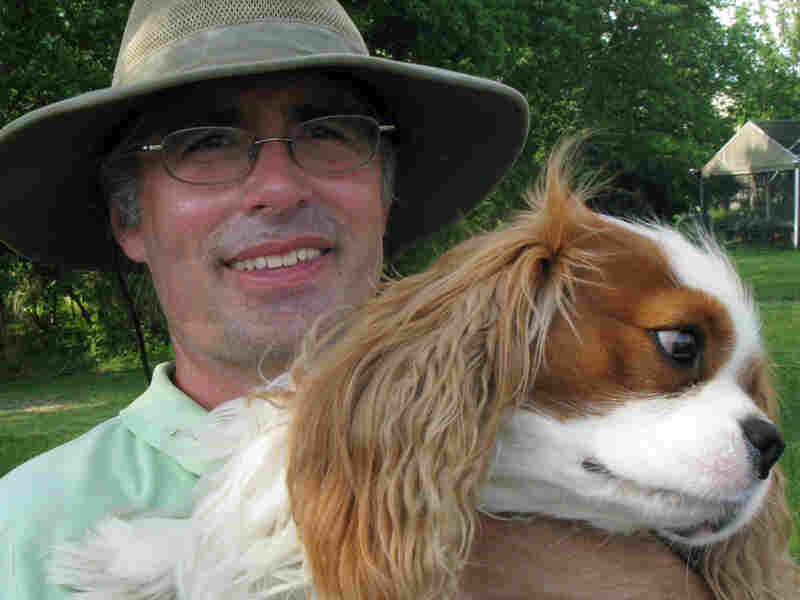 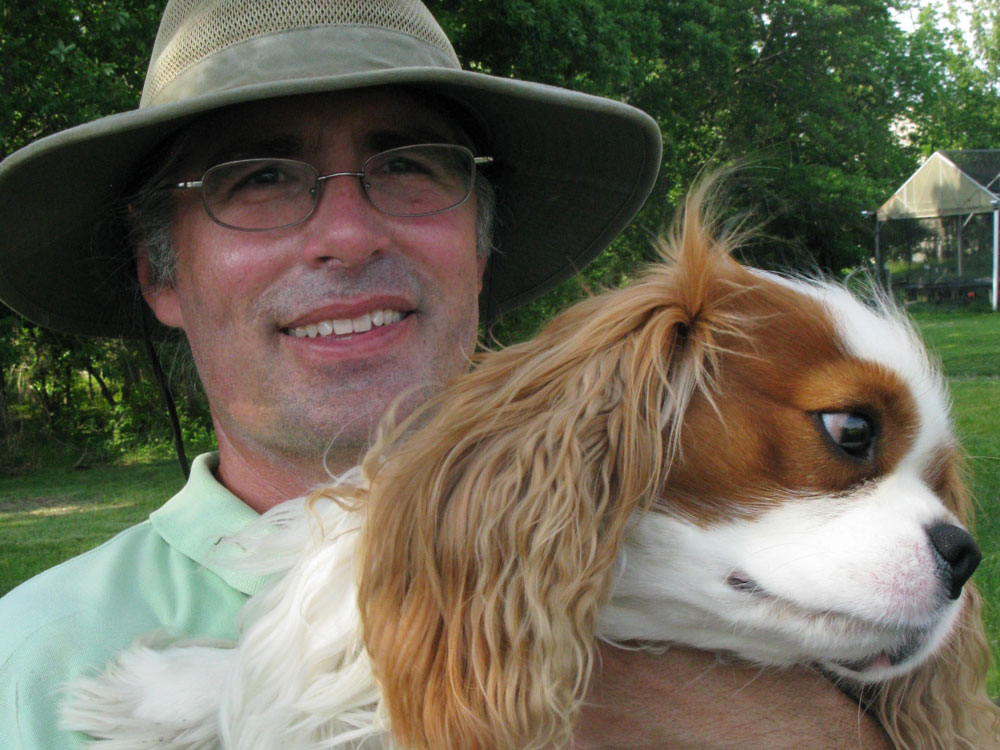 Tom's son Francesco DeBaggio, 45, with his dog Tucker, named after the lavender Tom introduced called Tucker's Early Purple. Francesco says he hasn't read the books his father wrote about Alzheimer's and isn't interested in seeing a genetic counselor. "It's just too raw," he says.

Francesco says he has no desire to see a genetic counselor.

"If they could do something preventively, and I found out, then I'd certainly be more likely to do it. ... I'm certainly going to be aware of the symptoms and hopefully be able to go at that point. But knowing ahead of time wouldn't give me any peace of mind. You know, when it first happened with him, I was thinking, 'Gosh, next week that could be happening to me.' I just was a little worried. And just keenly interested in what was happening to him, with the thought that, 'This could be me.' At the time it was, 'This will be. Now it's, this could be me.'"

Francesco got back to work in the sweltering heat. He told me the last time he went to see his father in the nursing home was last year, on Father's Day. He'll go back, he says, once work in the nursery slows down.

'It's Amazing How Many People Have The Same Story'

Joyce visits Tom once a week. She used to go almost every day. It gets harder and harder, she says. She'll sit in the parking lot for a long time to get her courage up.

It's been a long road for Joyce. She says that Tom's friends and fans ask about him, more and more -- or they'll ask her if he's still alive, she says.

"What's so wrenching, there's so many that have Alzheimer's in their family. Or they've just lost someone, or someone just been diagnosed. It just makes you cry, listening to all of their stories. It's heartening, too, that they can talk about it. It's absolutely amazing how many people have the same story."

Excerpt: 'When It Gets Dark' 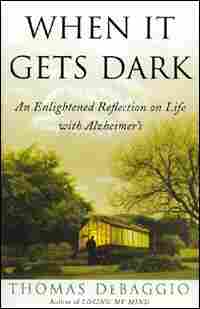 Following is an excerpt from the book When It Gets Dark, DeBaggio's second book on Alzheimer's:

Joyce and I have talked several times about taking trips, flying away to happy, interesting foreign lands and unusual places. I see a man with Alzheimer's swirl off to play and travel, a last chance to carry on and have fun. It is something I have never done and the idea has an almost irresistible charm. Yet, I hem and haw and roll my head in the sand. We go nowhere.

What I have been unable to tell Joyce clearly is that I don't want to wander outside my deteriorating brain. With the onset of Alzheimer's, I saw new revelations and visited places I had never been. They have turned out to be as useful, frightening, pleasant and beautiful as anything I could have wished. The real reason we haven't gone anywhere is that I am afraid of getting lost. I need the familiar around me to give me comfort and stability. I am at such a tender point in life now that I worry when I head out for the grocery store five blocks away. I get angry if a chair is moved in the house.

I wanted to chart this world of memory I've discovered inside my brain but I am beginning the exploration too late. The fires of Alzheimer's have nearly destroyed my short-term memory. My long-term memory is left battered; trying to find moments of the past is like fishing with a dull, rusting hook without bait. 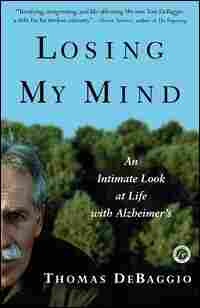 Following is an excerpt from Losing My Mind: An Intimate Look at Life with Alzheimer's by Thomas DeBaggio:

My father would have been ninety-one this year. I wish I could tell him I am sorry, sorry he died before his time and before we could know each other as adults. I wish I had not had to see my mother die slowly of cancer in the little hospital in Eldora, so ruined by life she could no longer suck water from a small ice cube. I am sorry it took so long to find myself and understand how much I loved them. All I have left are a few weak memories, and now it is too late for their boy.

It is frightening to lose control of your body in any way. It is especially tragic when the body's central control system, the brain, is the target of an angry destructive process that science has been unable to tame or reclaim, Memories tell us who we are and where we have been and they warm us and provide direction. In later years, the old memories remain to offer familiar anecdotes and the safety of the past.

As the brain is slowly devoured and gradually succumbs, turning the body into an empty vessel, remembering and writing are more than difficult; they are cold receptacles emptied of content. My memories are slowly disappearing from places inhabited for so long. In themselves, my memories do not compare with the great sagas of this century, the births, deaths, tumult, madness, great art and music, and the intense suffering of so many human beings. Our immortality, such as it may be, is not contained in what we dreamed or the secrets we kept; it is how our friends and loved ones remember us.

The struggle to find the words, to express myself, has become insurmountable. I must now be done with writing and lick words instead. I will soon be stripped of language and memory, existing in a shy and unsteady forbearance of nature. I am on the cusp of a new world, a place I will be unable to describe. It is the last hidden place, and marked with a headstone.

I must now wait for the silence to engulf me and take me to the place where there is no memory left and there remains no reflexive will to live. It is lonely here waiting for memory to stop and I am afraid and tired. Hug me, Joyce, and then let me sleep. 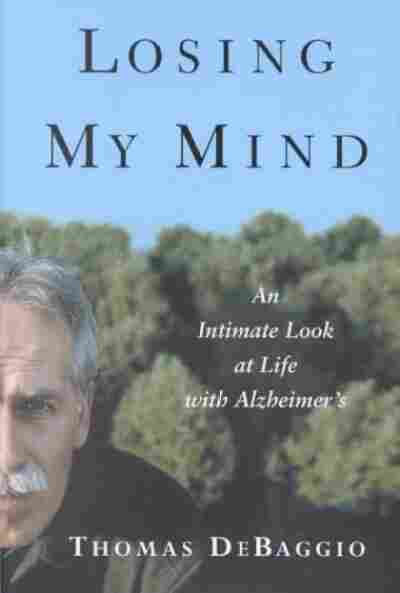 An Intimate Look at Life With Alzheimer's 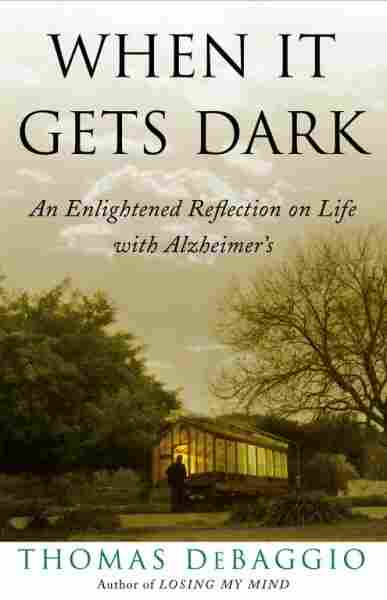 When It Gets Dark

An Enlightened Reflection of Life With Alzheimer's