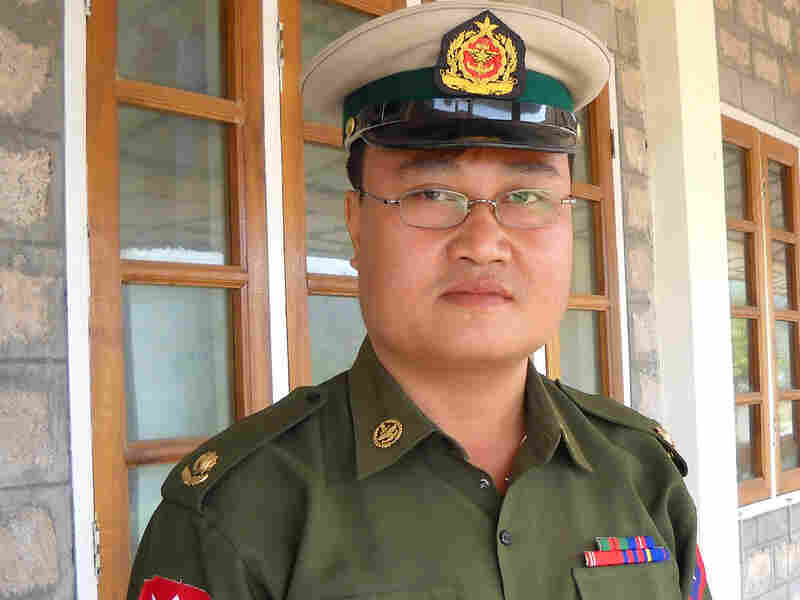 Sai Thein Win defected to Thailand bringing with him a trove of photos and detailed knowledge of a military-run defense plant. A recent documentary makes the case that the generals who run Burma have spent vast sums on a program to develop weapons of mass destruction. Democratic Voice of Burma/AP Photo hide caption 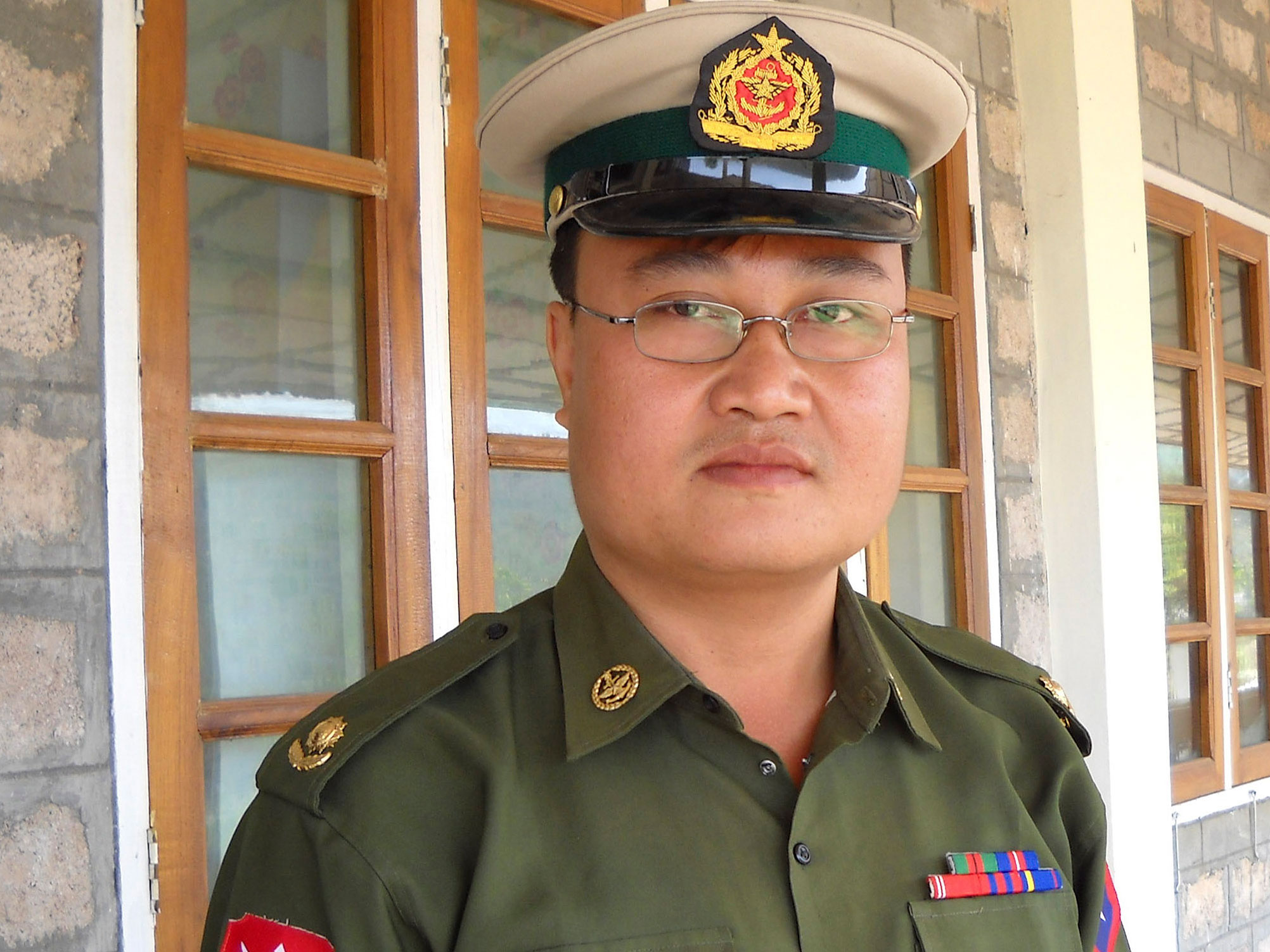 Sai Thein Win defected to Thailand bringing with him a trove of photos and detailed knowledge of a military-run defense plant. A recent documentary makes the case that the generals who run Burma have spent vast sums on a program to develop weapons of mass destruction.

If you're interested in international security, I strongly recommend that you check out a new documentary titled Burma's Nuclear Ambitions. The film comes from the Democratic Voice of Burma (DVB), an Oslo-based nongovernmental organization that has made a name for itself as a source of good independent reporting on events inside that benighted country. The reporters at DVB spent the past five years collecting the material for this project, which makes a persuasive case that the generals who run Burma (aka Myanmar) have spent vast sums on a program to develop weapons of mass destruction. Robert Kelley, an ex-U.S. nuclear scientist and former U.N. nuclear inspector who collaborated with the filmmakers, told me that their effort offers a unique opportunity to blow the whistle on a rogue state's nuclear plans earlier rather than later. "This is a small program at early stages," he says. "I hope that by releasing this information we're letting the cat of the bag, and that no one can put it back now. There should be a public debate."

There will be -- though so far a lot of major media outlets (including the New York Times and CNN) have notably failed to pick up on the story. And that's a pity -- not only because this scoop has broad ramifications for Southeast Asia and the future of the long-suffering Burmese people in particular, but also because it will almost certainly raise new concerns about the scandalous ineffectiveness of the existing international system to prevent the proliferation of nuclear weapons. (Yep, looks like the International Atomic Energy Agency (IAEA) has been caught asleep at the wheel once again.)

The documentary -- which aired earlier this month on the English-language version of Al Jazeera -- shows how Burma's reigning generals have used their profits from the sale of natural resources to fund the purchase of sophisticated equipment and the training of thousands of Burmese engineers abroad (mostly in Russia). The DVB reporters had been plugging away at the story for years without getting beyond the level of tantalizing hearsay. They'd heard that the government was spending billions on vast underground command centers and an underground fiber-optic communications system to go with them. They'd learned about the attempts to train Burmese engineers in various military-related disciplines outside the country, and they knew -- like the U.S. government -- that the generals in the test-tube capital of Naypyidaw were engaging in various kinds of suspicious cooperation with North Korea.

But they still didn't have hard evidence. So they decided to beam a message back into Burma by satellite, asking for sources to come forward. In February of this year someone finally responded. An army major by the name of Sai Thein Win defected to Thailand, bringing with him a trove of photos and detailed knowledge of a military-run defense plant where he had worked as a manager. Sai, who had spent five years in Russia studying engineering, revealed how he and his colleagues at the factory had used German-made precision machine tools to manufacture rocket parts. At another installation he saw -- and photographed -- equipment that was allegedly intended for uranium enrichment. (Kelley, who served as a consultant to the DVB production, confirmed that it was highly likely that the equipment shown in the photos was being used for nuclear purposes.)

And of course there is the highly incriminating back story of North Korean involvement in Burma. It should be said that, though the DVB documentary includes photos showing purported North Korean advisors giving the Burmese help with large-scale tunneling (one of the few areas in which the North Koreans have world-class expertise), it doesn't provide any solid evidence that Kim Jong Il has shared his nuclear technology with the generals. That isn't to say there isn't good reason to harbor suspicions, though. The film does include photos of the Burmese regime's No. 3 general visiting his jovial counterparts in Pyongyang in November 2008. (The person who passed the photos on has apparently since been shot.) Bertil Lintner, an expert on Burmese politics who also collaborated with the filmmakers, says that Western diplomats have verified the presence of North Korean technicians at a Burmese missile production facility.

And what, for example, was on board the Kang Nam 1, the North Korean ship freighter that was sailing for a Burmese port last year until the U.S. Navy persuaded it to turn around? U.S. Secretary of State Hillary Clinton expressed concern about deepening ties between the two pariah states at a meeting of regional leaders last year. In May, U.S. Assistant Secretary of State Kurt Campbell issued a statement calling on the Burmese leaders to comply with the U.N. sanctions imposed on North Korea after Pyongyang's nuclear test a few years back.

The question that arises from all this, of course, is why Burma would want to get into the WMD business in the first place. The country has no threatening neighbors, no regional rivals that want to take it over. But that, say the experts, would be to underestimate the regime's xenophobia and pathological suspicions of the outside world. The film offers clues. One Burmese ex-diplomat defector interviewed on camera puts it like this: "In 1992, when General Than Shwe came to power, he thought that if we followed the North Korean example, we would not need to take account of America or even need to care about China. In other words, when they have nuclear energy and weapons, others will respect us." Burma analyst Lintner points to the domestic context as well. "According to the people I have talked to, the Burmese generals believe they need a strong deterrent to remain in power, against the outside world as well as their own population." In 2007, it should be recalled, hundreds of thousands of demonstrators took to the streets to protest against the country's leadership. If having nukes would make it that much harder for outsiders to pressure them, that would, conceivably, make life harder for internal opponents as well.

We could, perhaps, take some consolation from the fact that the Burmese WMD program doesn't seem to be terribly sophisticated. Geoffrey Forden, a Massachusetts Institute of Technology expert who examined the evidence on the Burmese missile program, gives them five to 10 years to get a rocket launched and built -- and much longer to come up with one that would have serious range. Kelley says that, based on the evidence, the nuclear program looks even less serious. The generals don't appear to have any coherent strategy for actually making a functioning nuclear weapon. The only enrichment technique they seem to be using so far is the laser isotope method, which several developed countries have tried and dropped as unduly complicated. Kelley speculates that bureaucrat-scientists might be leading the generals on a bit (something, he says, that's been known to happen in other countries where political leaders are eager to get their hands on powerful weapons). One of the defectors tells a story about the scientists demonstrating a laser to visiting higher-ups by burning a hole in a piece of wood. One of the attending generals was so discomfited by this mysterious device that he immediately asked them to stop.

Yet there is still plenty of cause to worry. For one thing, the generals have plenty of cash. Over the next few years they'll be earning tens of billions of dollars from natural gas sales to the Chinese -- and much of that money is apparently slated for the nascent WMD program. And even though the Russians halted work on a promised reactor project when they started to harbor doubt about Burmese intentions, it's clear that there's little the international community can do to prevent the junta from doing what it wants inside the country. (It turns out that the IAEA basically gave Burma a pass a few years ago when the country essentially declared itself a nonnuclear power, and has little leverage to exert as a result.) Our best bet, it would seem, is that the brutal, paranoid, and astrology-driven generals who run Burma really are just as wasteful and incompetent as they appear to be from the outside. So why doesn't that seem especially comforting?