Accessibility links
BP Faces Possible Sanctions For Gulf Coast Spill Some are calling on the government to take away the energy giant's right to bid on federal oil leases. Others want BP restricted from bidding on federal contracts. And still others want a huge fine levied against the company. 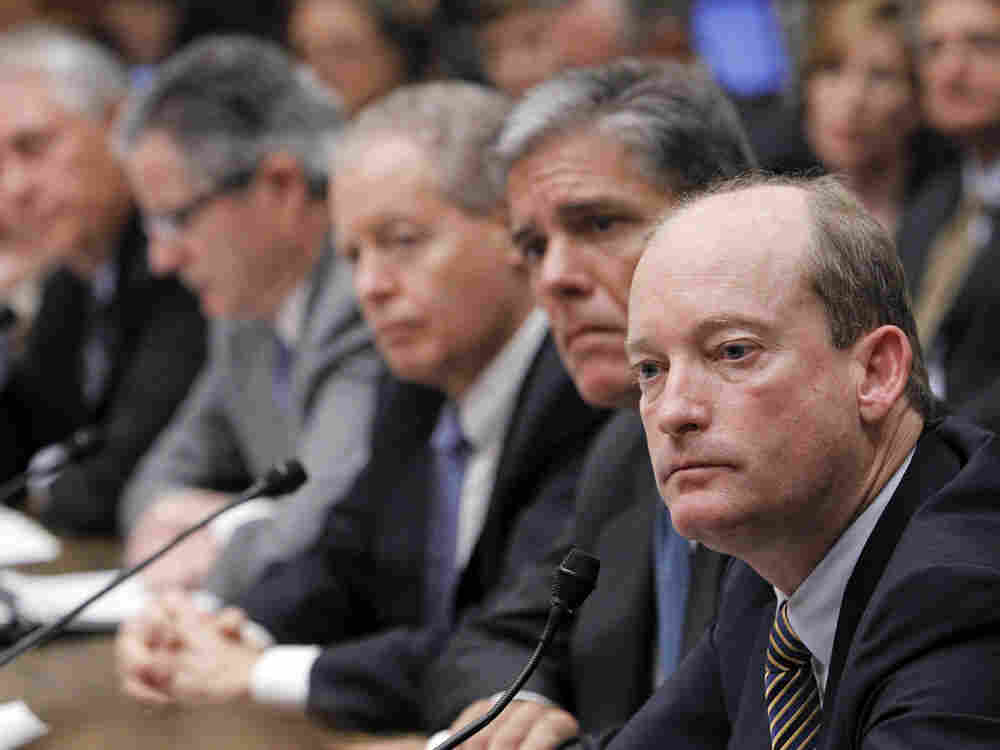 BP America CEO Lamar McKay and other Big Oil executives testify Tuesday on Capitol Hill. BP may be forced into losing its place among oil giants because of sanctions from the U.S. government over the oil spill in the Gulf. Haraz N. Ghanbari/AP hide caption

The oil spill in the Gulf of Mexico is going to cost BP billions of dollars to clean up, but the company could lose something worth even more -- the right to drill in the Gulf in the future.

Some are calling on the government to take away BP's right to bid on federal oil leases. Others want BP restricted from bidding on federal contracts. And still others want a huge fine levied against the energy giant.

Tyson Slocum, who heads the energy program at the watchdog group Public Citizen, wants all three.

"This is a company that does not learn its lesson," Slocum says. He says individual sanctions haven't changed BP's history of violating environmental and safety laws, and he thinks the government should throw the book at the company.

BP has an estimated $2.1 billion in contracts with the Department of Defense, mostly to provide jet fuel. Slocum says those should go to someone else. "A company that can't be bothered to comply with U.S. laws and regulations does not deserve to get lucrative Pentagon contracts," he says.

But all those sanctions together could hobble BP financially. Oil industry officials say penalties need to be weighed against the benefits BP provides. For example, it employs 23,000 people in the U.S.

"Our hope is that no matter what actions are taken, it's done in an informed manner and recognizes the jobs that are created," says Erik Milito, group director for upstream and industry operations at the American Petroleum Institute.

Beyond that, if BP were penalized to the level of being put out of business, who would pay to clean up the mess? That's why David Pursell, managing director of the investment bank Tudor Pickering Holt & Co., has a different suggestion.

Pursell's idea is for the government to remove BP's ability to operate rigs in the Gulf of Mexico. He says BP would keep financial interest in the rigs, but someone else would operate them. "It allows the government to penalize BP for past sins, but it allows BP to continue as a viable financial entity," he says. "Because there's a lot of cleanup work to do, and our view is BP is worth more alive than dead."

Michael Wara, an environmental law professor at Stanford University, has examined all of the arrows in the government's quiver and reached a different conclusion. "The appearance of cracking down, I think, might best be accomplished by making BP pay a large dollar sum," Wara says.

That's a penalty the average person can easily understand. Wara says all of those other sanctions could be used as leverage, then dropped to get BP to agree to the figure without a lengthy court battle.

If the Obama administration is considering any of these things, it's not saying which route it will take. BP says it won't comment on speculation.