Accessibility links
Forget Hybrids; Make Your Own Electric Car With hybrid cars multiplying and all-electric vehicles on the way, a California auto shop says: Do it yourself. Electro Automotive has been teaching people how to convert gas guzzlers into electric rides for 30 years. 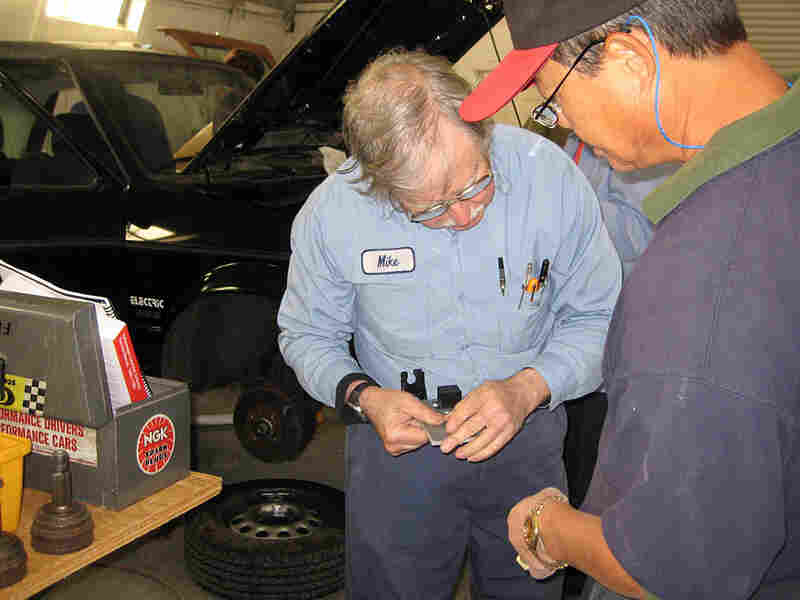 Mike Brown (left), owner of Electro Automotive, works on a gas-to-electric car conversion with a student, Daniel Marcom. Brown has been selling the parts to make such conversions since 1979. Krista Almanzan for NPR hide caption 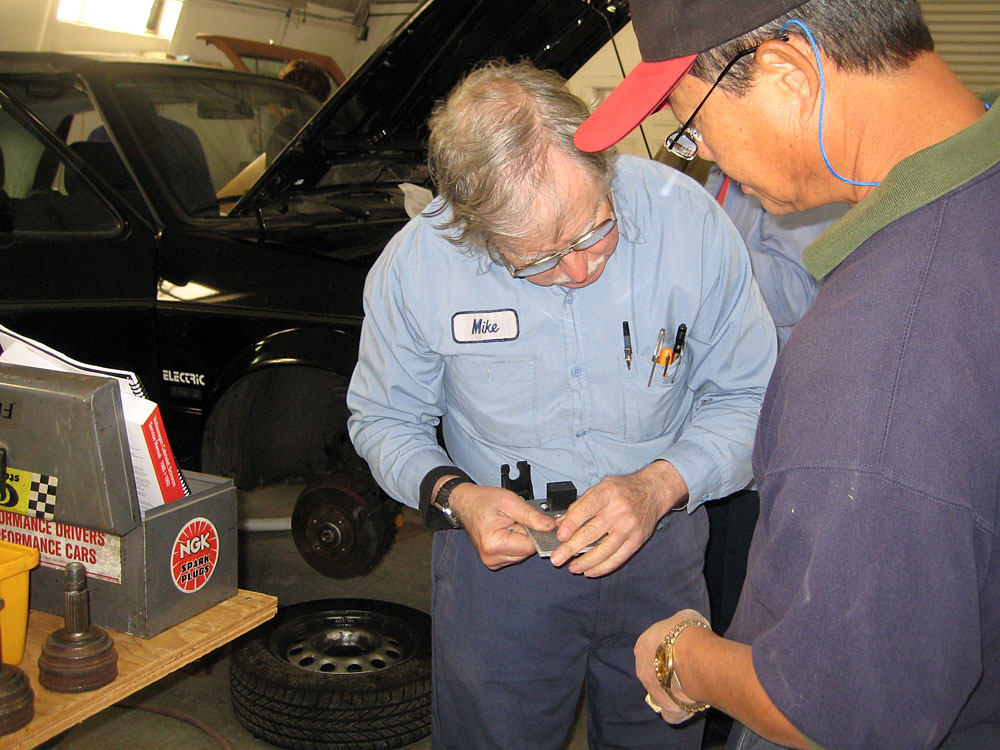 Mike Brown (left), owner of Electro Automotive, works on a gas-to-electric car conversion with a student, Daniel Marcom. Brown has been selling the parts to make such conversions since 1979.

Hybrid cars are everywhere. And all-electric cars are coming: General Motors' Volt and Nissan's Leaf are due to hit the streets by the end of the year.

But in Bonny Doon, Calif., one company has been converting gas-sucking cars into all-electric vehicles since 1979. Mike Brown, with his company Electro Automotive, was the first to sell parts for gas-to-electric conversions, and he teaches workshops on DIY conversions.

"The market we focused on was the grocery-getter," Brown says. He wanted the cars to be able to hold four adults and a load of groceries.

The short-commute market is a natural fit for electric-car conversions because these cars do have limitations: the biggest being how far the car can go on one battery charge.

Recently, Brown and some of his students converted a gold 1984 VW Rabbit from gas to electric in the hands-on workshop.

The Rabbit got an electric motor that runs on 18 batteries like the ones used in golf carts.

Brown's wife and business partner, Shari Prange, says cars like the retooled Rabbit can get from 20 miles to 100-plus miles between battery charges. It depends on the car, how it's driven and its amenities.

"If you're using accessories like air conditioning, or if you've got four-wheel drive, that's going to use more energy," she says. "If you want a really hot acceleration car, that uses more energy just like it uses more gas."

And that's the challenge a business like Electro Automotive will face from the growing electric market.

It's not about saving money. It's about having [an] electric vehicle for my enjoyment as well as doing good for the environment.

Bill Moore, who publishes the online electric vehicle magazine EV World, says what the Nissan Leaf will have over gas conversions is that it was built to be an electric car. "This thing is going to drive just like any car," Moore says. "The only limit being it'll only go as far as its batteries will carry it."

Nissan puts the range at 100 miles.

'Doing Good For The Environment'

Still, back in the Electro Automotive workshop, student and former airplane mechanic Daniel Marcom says he'd rather build his own. "This way I can modify it exactly the way I want it," he says.

And Marcom says he'll take what he learned working on this conversion back home to Hawaii. He expects to spend about $20,000 to convert a Porsche. Some DIY conversions can be done for as little as $9,000. "It's not about saving money," Marcom says. "It's about having [an] electric vehicle for my enjoyment as well as doing good for the environment."

Brown and Prange know the emerging electric-car market can take a bite out of their business, but it can also help their business grow because it increases awareness. "We're no longer a bunch of hairball freaks on the fringe," Prange says.

And while major manufacturers may not say so, Moore credits the fringe electric-car enthusiasts for keeping the technology alive.