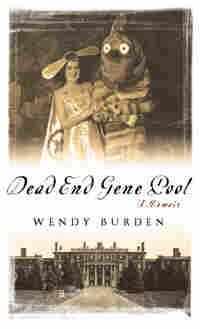 It never occurred to our mother when she left us at the airport that we might not be returned in the same condition. The notion that our chaste little bodies could be taken aside and fingered by unfamiliar hands didn't cross her mind. Nor did thoughts of Tunisian white slavery, the narcotic courier trade, Lower East Side sweatshops, or abduction by green pedophiles in silver pods. Or maybe they did.

She would leave us at the departure gate, Will in a blazer and clip-on bow tie, me in a scratchy plaid jumper from Best & Co., and then stride off. In the beginning, I pretended she was only going to the restroom, and that the line there was so long that by the time she rushed back, we'd already boarded. I imagined her lingering until the plane departed, blowing kisses and waving to our tiny portholes as the props whined us out to a speck in the sky. I pictured her driving home in her humpy red Volvo to an empty and joyless house where, in despondency, she'd spend the weekend organizing our rooms and planning vacations to Disneyland until she picked us up on Sunday night. But I got over that pretty quick.

Truth be known, our mother delivered us to any person wearing any semblance of a uniform standing anywhere near the gate, and left without waiting for the plane to board. From the "Standing Only" spot she had parked in, she could make it downtown to Trader Vic's in less time than it takes to put on a pair of sheer black stockings and get the seams straight.

In the early 1950s everyone married early, and my parents had been no exception. My mother had been a nineteen-year-old anthropology major at Radcliffe, and my father had been twenty-one, and a junior at Harvard. Now, a decade later, she was a young widow, and was she ever making the most of it.

"Surprise!" she would say to us at breakfast on the mornings after her returns. She'd take her hands from behind her back and plunk down some huge, hairy arachnid suspended in an alcohol-filled jar.

"Wow," we would slur through our Froot Loops, "you went to Haiti again."

"Look what else I brought you!" she'd say, holding out batik swimwear you'd rather get rat-bite fever than be seen in.

"Thanks," my brother and I would say as we grabbed our book bags and headed out the door like we were worried about missing the bus.

The presents our mother brought were our only clue as to where she'd been. Ice plants meant California. Live alligators in shoe boxes meant Miami and the Roey Plaza Hotel. Dead ones on handbags meant Tijuana. So did jumping beans. Gardenias were routine; they came from an evening of scorpions at the Outrigger Bar at Trader Vic's. We would open the fridge to get out the orange juice and find them, bruised and dog-tired from floating around in rum and dodging the straws of my mother and her date. You could see the little stab marks all over them.

For the sake of convenience, I'd learned to do a passable forgery of my mother's signature by second grade. The teachers mostly let it slide (it was a liberal primary school for the children of Washington diplomats), but when I okayed four Ds and an F in a parental note, they reeled me in.

"I'm truly sorry about your daddy," my homeroom teacher said, addressing me across her desk with compassion. "And I know your mommy is frequently out of town, no doubt dealing with her own . . . grief." She adjusted her glasses. "That must be very difficult for you and your brother."

I nodded and gave a little sniff for good measure. Ha. Was she kidding? It was completely cool to have a dead father. I was the class celebrity. And I loved it when my mother was away. I hung out in the basement with my governess, Henrietta, lying on her double bed, inhaling secondhand smoke and watching Ted Mack's Amateur Hour or The Ed Sullivan Show -- she with a tumbler of whiskey, and I with a bag of Wise potato chips. One thing my mother knew how to do was pick out a good governess.

Henrietta and I had a running joke about my mother's schedule.

"When she's darker than Sambo, lassie," Henrietta would say back, laughing and choking on her own phlegm. Lighting a fresh Winston off the glowing butt of the last, she'd reach over and tousle my hair. "A wee more dip with those crisps, lassie?" We absolutely understood each other.

Over the PA system, the captain came on again. "I'm sure y'all have noticed we've been circling. We're trying to use up some a that big ol' tank a gas before we come on in." He proceeded to tell us that there was a little ol' problem with getting the landing wheels to go down. That got everyone thinking. Now all you could hear was the vibration of the propellers slicing evenly through the dark, and the muffled terror of people mentally preparing to die. Only the Indians in the back appeared unconcerned; what did they care? They'd be back.

My brother had gotten the window seat, despite my efforts to scratch and bite my way into it first, and since the captain's announcement, he'd been springing up and down, calling out numbers. Every time I told him to shut up, he said he was counting the moons.

"Fifteen . . . sheesh! I can't believe how many there are," Will said to his tiny oval aperture. He had his nose flat against its own reflection. The cabin lights had been dimmed for landing (or whatever), and an eerie column of light from the reading lamp bounced off my brother's crew cut.

"George is gonna be mad we're late," Will said to the glass.

"He's probably hoping the plane'll crash and we'll be dead, so he won't have to drive us anymore." I was trying to sound tough, even though my heart was starting to make weird little jumps in my chest.

Will turned from the window. "You think we have time for one last Coke?"